This Greek Orthodox Church, built in the 17th century, is located on the southern-western side of the old city of Acre, over the ruins of a Crusader church.

This Greek Orthodox Church, built in the 17th century, is located on the southern-western side of the old city of Acre.  It is named after St. George of the city Lod. The church was built in the remains of a Crusader church.

St. George church is located on the southern-western side of the old city of Acre. To get to the church, park near the Bahai-faith newly restored center which is located 100M north to the lighthouse. Then, walk 100M through the alley towards east.

St George was born and lived in the 3rd Century AD in the Holy Land city of Lod (Lydda), a city south of Ben-Gurion airport. George, an early Christian, served as a Roman tribune and died in 303. His  coffin is located in St. George church (in Lod; has the same name), where according to a 6th C tradition his remains are located.  He is regarded as a martyr, a great Holy warrior saint, and is illustrated in the stone relief  in Acre and in Lod as a “dragon slayer”.

The Lod basilica was dedicated to St George in the Byzantine times, and later other churches were named after the great Martyr.

The present church was built over a Crusaders level, where a Crusaders church may have been located, as implied by maps from that period. That church, located in the Genoa section,  was probably destroyed at the end of the 13th C after the Mamlukes destroyed the city.

The church was in ruins for 400 years, and rebuilt in the 17th Century.

The old church is a small single level structure, which was built in the 17th Century, probably over the ruins of an earlier Crusaders church. 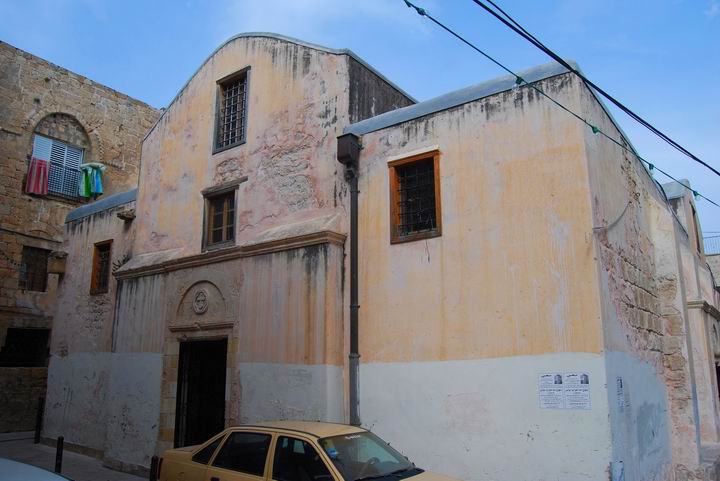 A detail of the symbol above the entrance, which is facing the west. 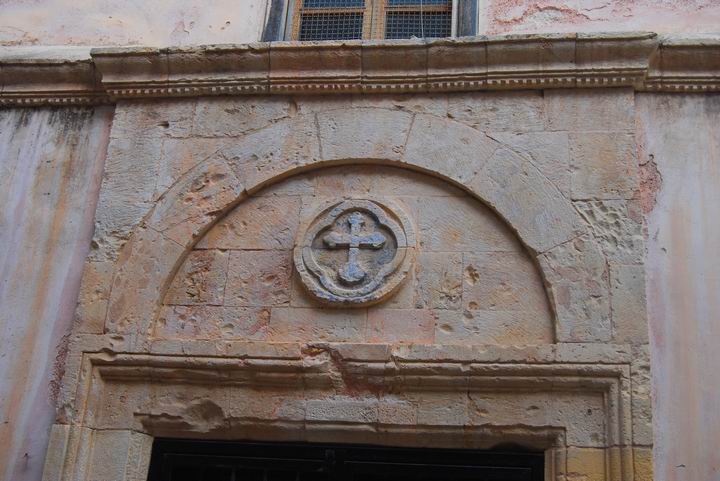 A view of the church from the north-west corner. 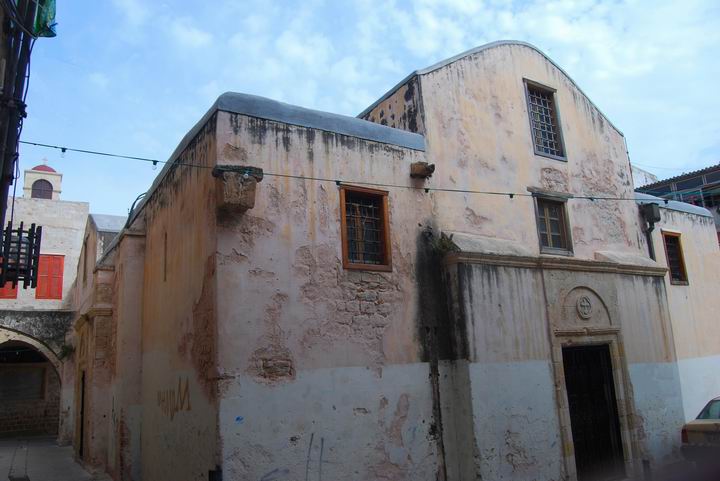 A view of the north side of the church. 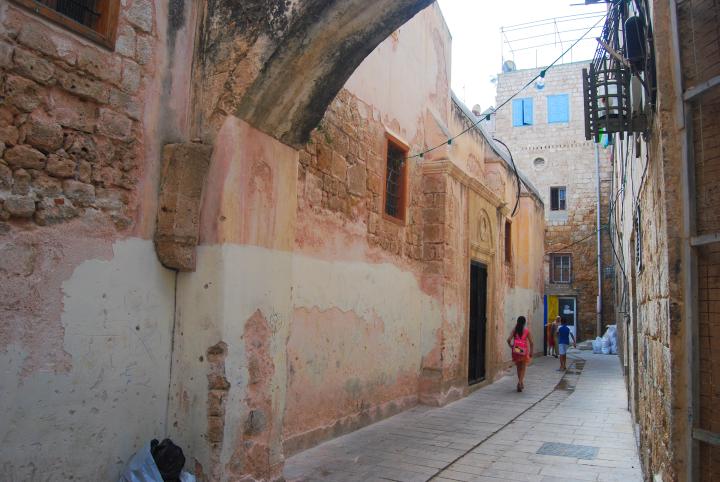 This is the southern side of the church, and its main entrance. Above the door is a stone relief showing St George slaying a dragon and an enemy, and other scenes. 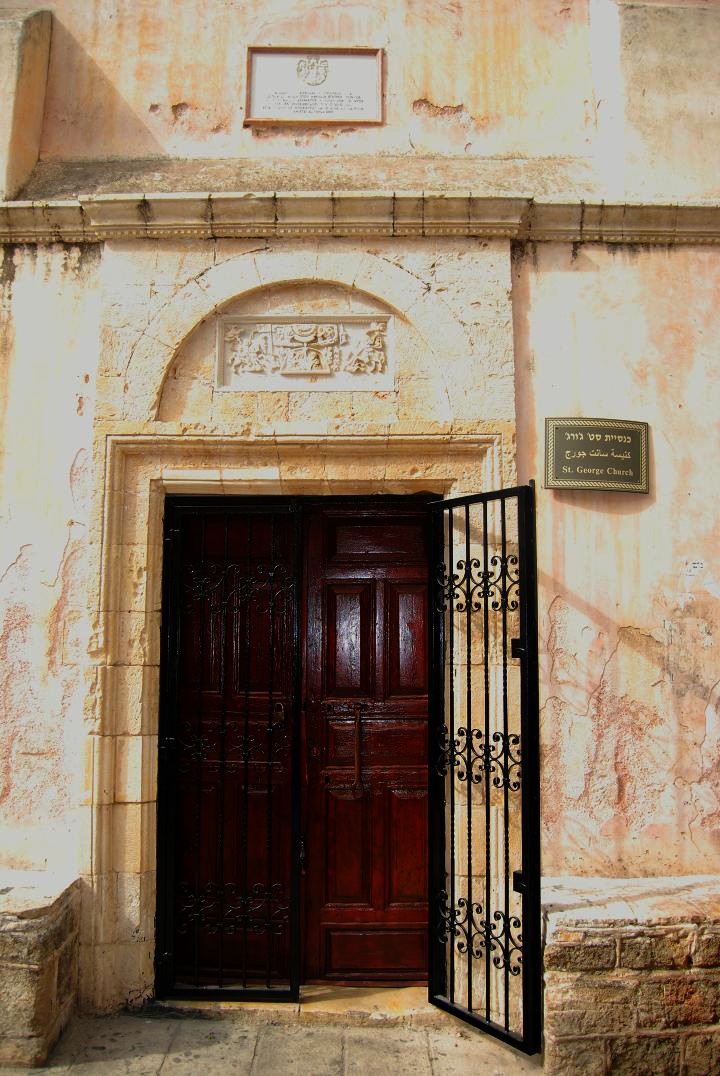 A detail of the fight scene, with St George, the great Christian soldier fighting as a Roman tribune, riding on a horse. He is spearing an enemy soldier on the right side and a dragon on the left side. St George gave his name to this church.  In the scene are also angels crowning him above his head, Mary and Jesus in the center, and more. This stone relief is dated to 1845. 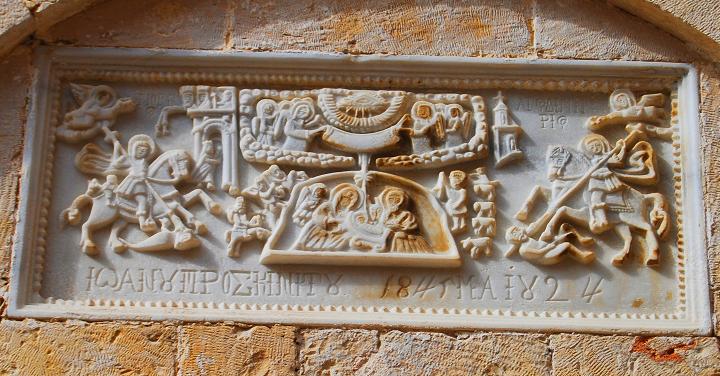 A marble tablet from 1846 is seen below, and is embedded in the wall. 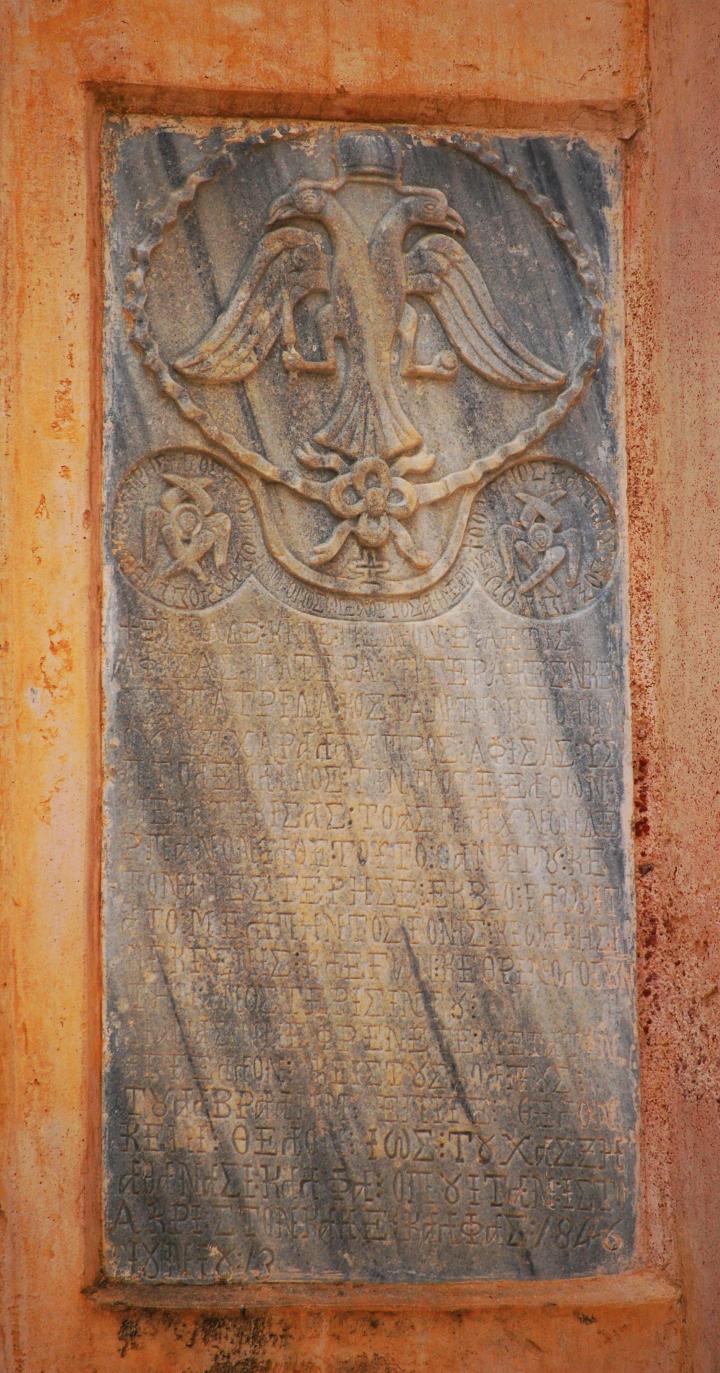 Pictures from the interior will be added at a later stage.

On the ground facing the church on its east side is a small corner with the tomb of George the Cypriot, who Martyred  in Acre in 1752. Note that this is not the George who named the church. 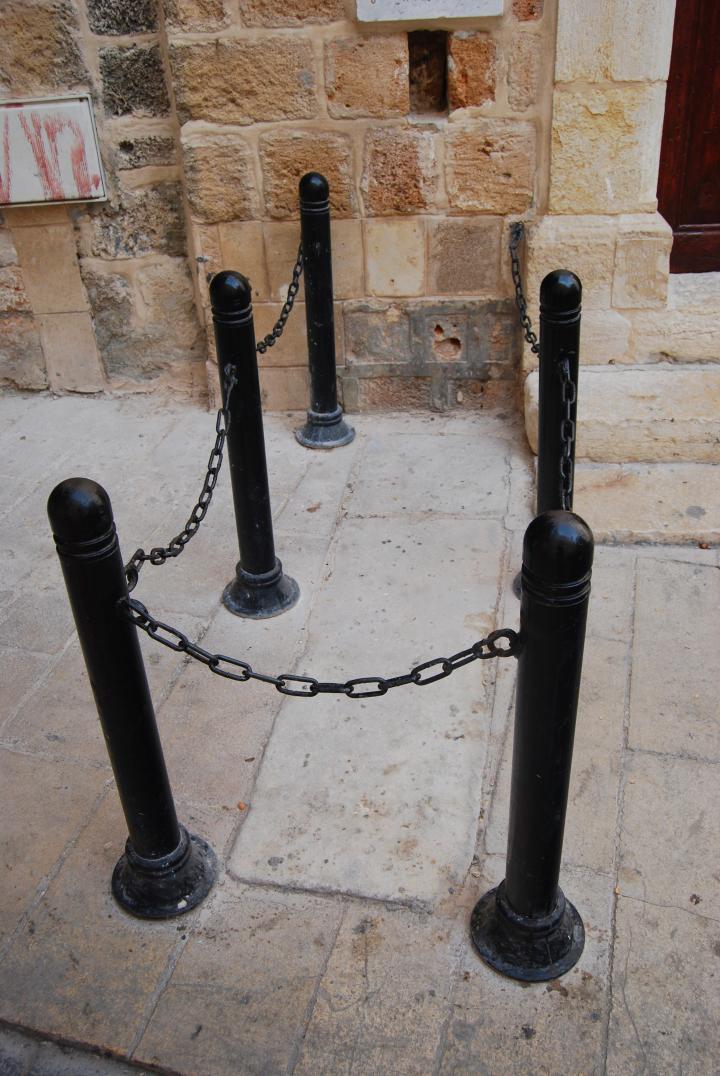 This is the  tablet above the tomb, which was erected in 1999 on the wall of the residence of the Greek Orthodox Patriarch. 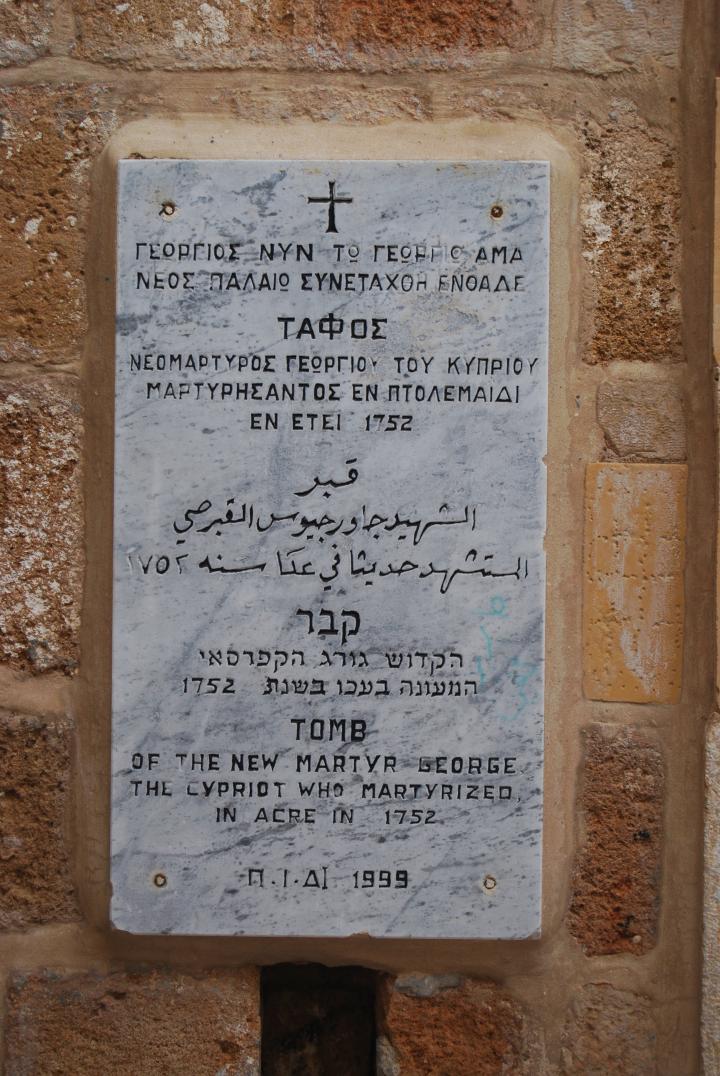 Another set of tombs are located on the south side of the church, facing its entrance. In the small room, behind the black gate, are a number of tombs. 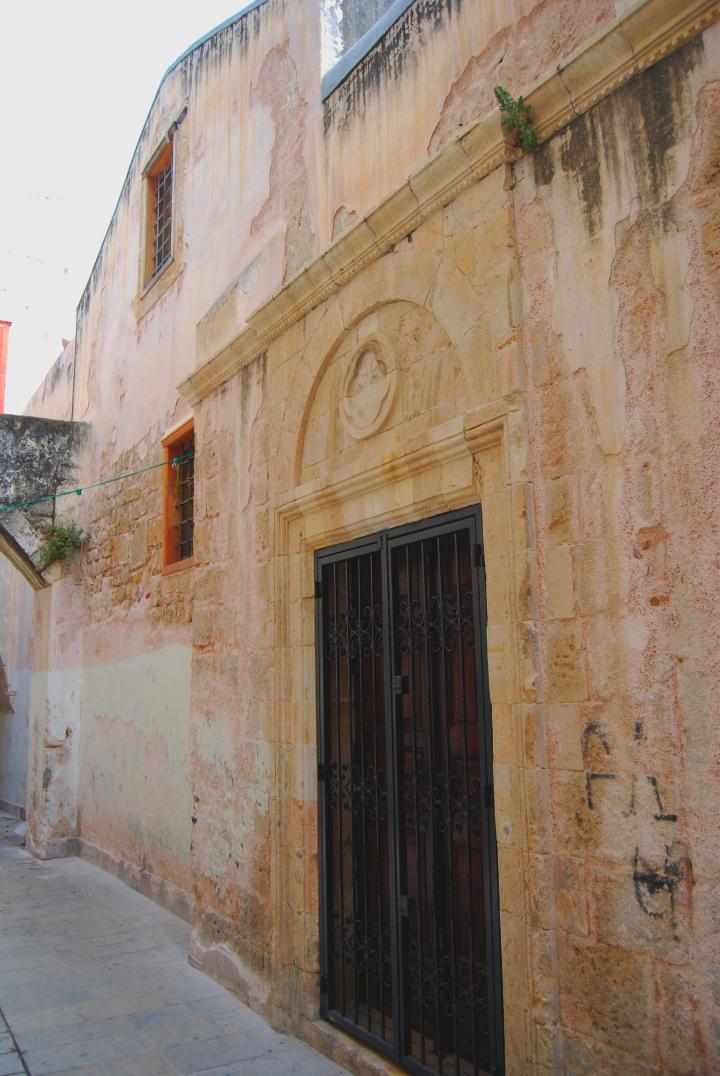 The Greek Patriarch resides in the building on the east side of the church, seen in the background of the photo below. On its wall, facing the church, is a large marble monument tablet, honoring the memory of British officers. The tablet is seen below under a covered arched roof, where my grandmother Rina is standing. 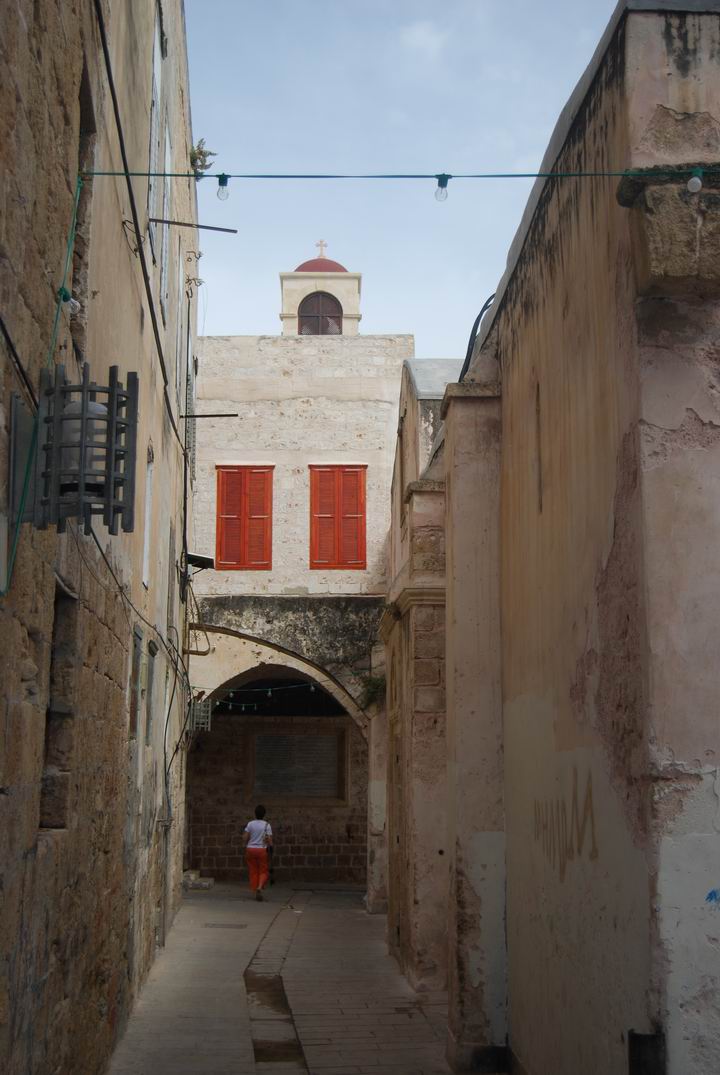 The tablet was erected in 1907 and re-inscribed in 1917. It commemorates the two officers (Oldfield and Walker) who died during two British victorious operations in Acre: 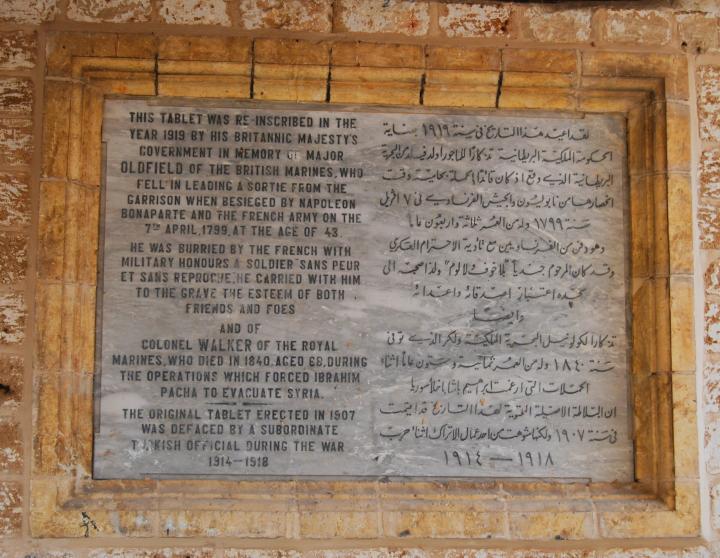 (f)  Around the Church

The Greek Orthodox Patriarch resides in the house on the east side of the church, and is seen in the following photo. 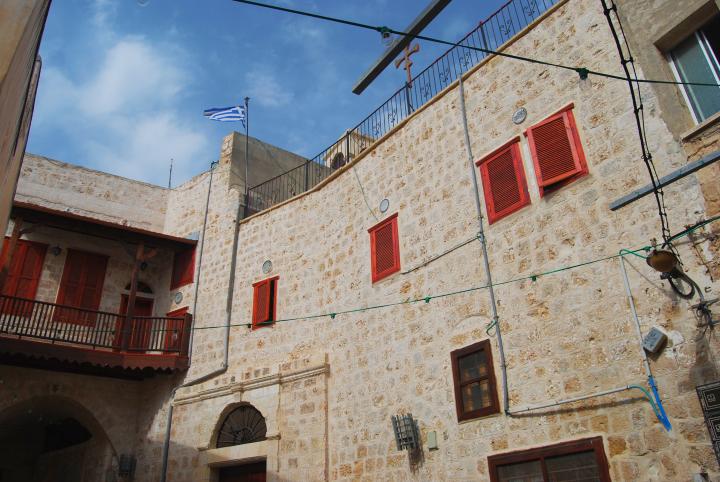 The photo below shows a detail in the wall of the Patriarch. These colored ceramic plates are located above each window. 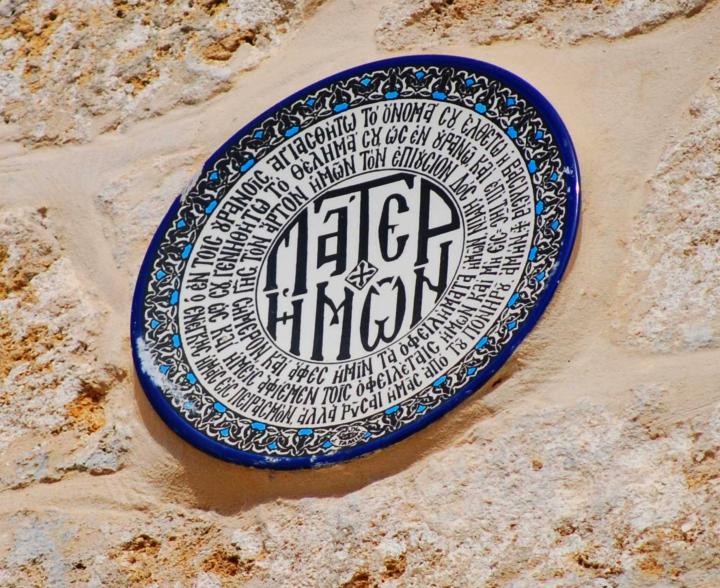 While strolling around the church, you can view interesting architecture elements, such as the windows in the photo below. 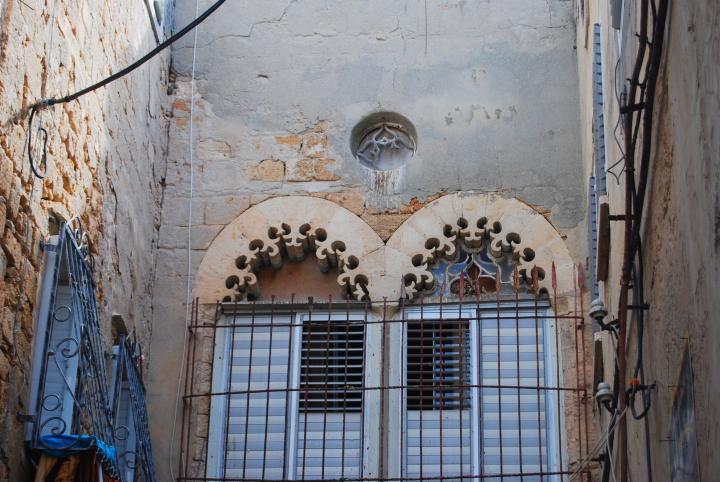 A detail in the wall of the church, with a cross. 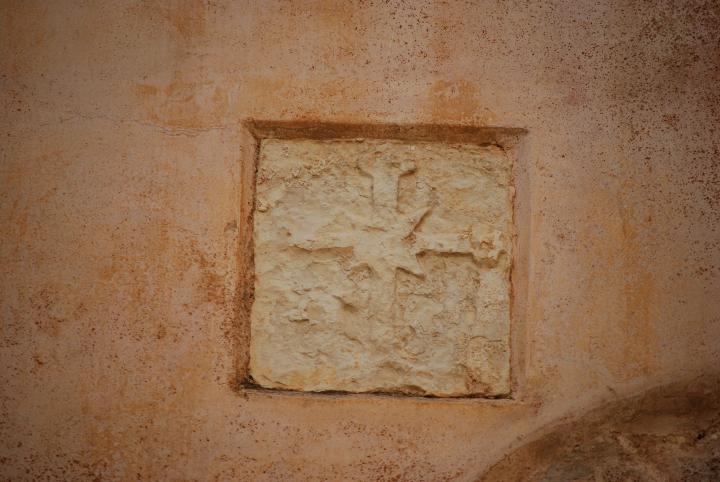 One the 50th day after Easter is the most Holy Christian celebration – the holiday of the light. According to Acts 2, the Holy spirit descended on the 50th day. It is celebrated with a parade and torches in the streets of Acre close to the church, with the participation of the bishop, aids, scouts and the community. 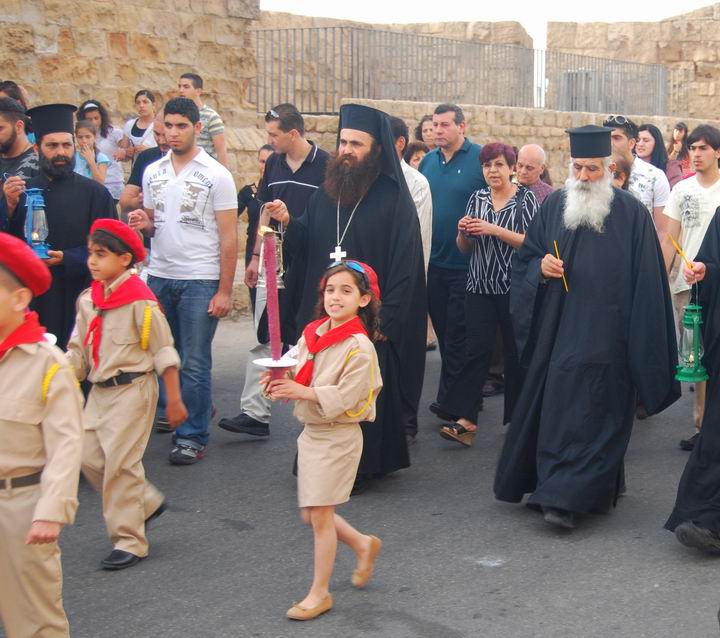 The pictures below are scenes from the parade. 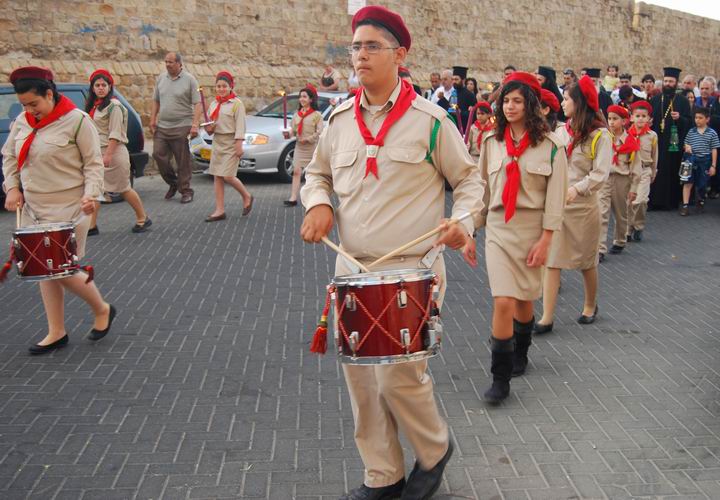 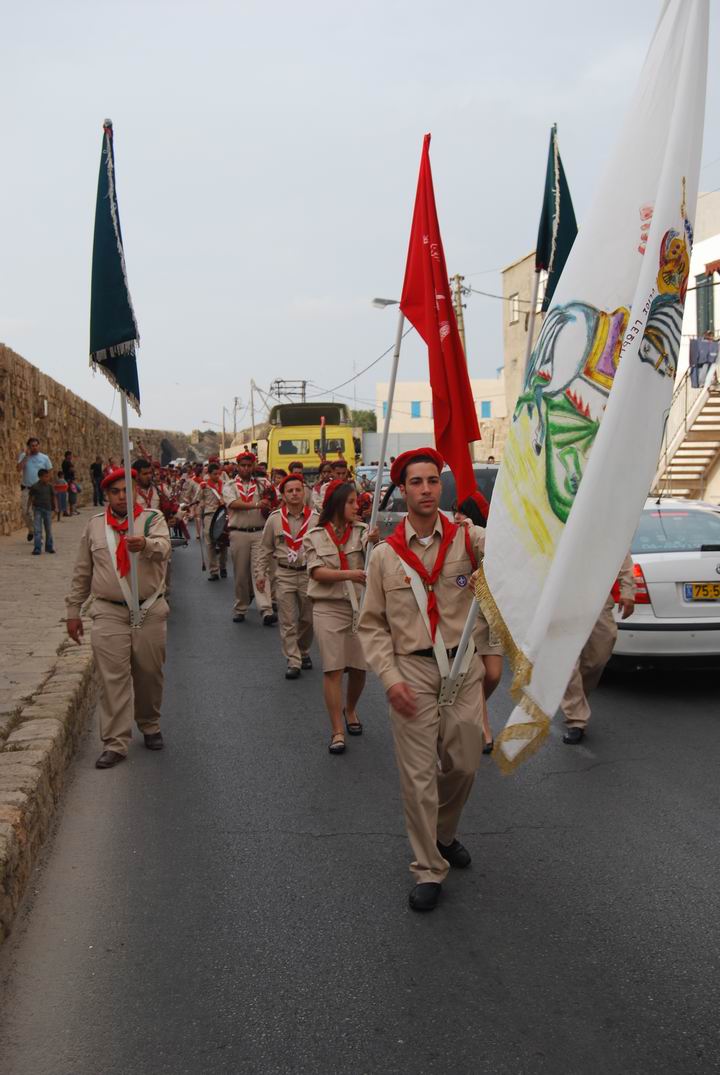 This text is the basis of the celebrations held 50 days after Easter (Pentecost/Shavuot):

“And when the day of Pentecost was fully come, they were all with one accord in one place.  And suddenly there came a sound from heaven as of a rushing mighty wind, and it filled all the house where they were sitting. And there appeared unto them cloven tongues like as of fire, and it sat upon each of them. And they were all filled with the Holy Ghost, and began to speak with other tongues, as the Spirit gave them utterance. And there were dwelling at Jerusalem Jews, devout men, out of every nation under heaven. Now when this was noised abroad, the multitude came together, and were confounded, because that every man heard them speak in his own language. And they were all amazed and marveled, saying one to another, Behold, are not all these which speak Galileans?…”