Wine production was a popular industry in the Holy Land. Many winepresses are found in most of the Biblical places and ancient sites.

Wine production was a popular industry in the Holy Land. Many winepresses are found in most of the Biblical places and ancient sites.

Isaiah 5:2: “And he fenced it, and gathered out the stones thereof, and planted it with the choicest vine, and built a tower in the midst of it, and also made a winepress therein: and he looked that it should bring forth grapes, and it brought forth wild grapes”.

Wine was first produced in 6,000 BC in the area of Mesopotamia. During the Biblical times (Iron/Persian Age) the wine making industry was wide spread in the Holy Land and was one of the largest exports.

The Bible has dozens of references to wine, wine making and winepresses. The first reference is of Noah, the World’s first winemaker (Genesis 9 21-22: “And Noah … planted a vineyard: And he drank of the wine, and was drunken…”).

Initially the winepresses were small and installed in the fields near the vineyards, normally cut into the local stone. Later, some of the villages evolved around the winepresses, and even became cities bearing the name of the winepress. Clusters of winepresses, with3 or more systems, were later installed at central industrial areas, or were installed close to the ports along the sea.

The number of winepresses increased considerably during the Roman/Byzantine period, and its production and export was one of the leading incomes. Hundreds of winepresses are found in the fields, villages and the cities of the Holy Land.

One of the reasons for the large demand was due to the Roman Legionnaires stationed in Israel. As per our wine expert, Uncle Ofer, each Roman soldier consumed a liter per day, or 6,000 liters per day for one Legion stationed in the Galilee. The wine has medical advantages – killing bacteria and making the drinking water safer. The wine was often diluted with equal portion of water, and used as their drinking water, keeping the soldiers healthy (and happy). This may have been one of the Roman soldiers advantages in the battlefield. To supply this demand the wine was produced in a short period of a month or so, producing a low alcohol (4%) sour wine.

Most of the vineyards and winepresses were located in the hills of the lower and upper Galilee, the Golan, the Sharon and the hills of Judea.

In the recent 10 years, wine making is booming again in Israel. The number of wine makers increased from a handful to over 175 (25 commercial wineries and 150 boutique wineries) and rising. Once again the Holy Land is returning to a world class wine status.

The typical ancient winepress consists of the following elements: 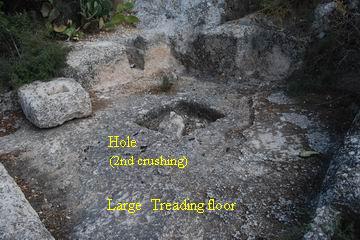 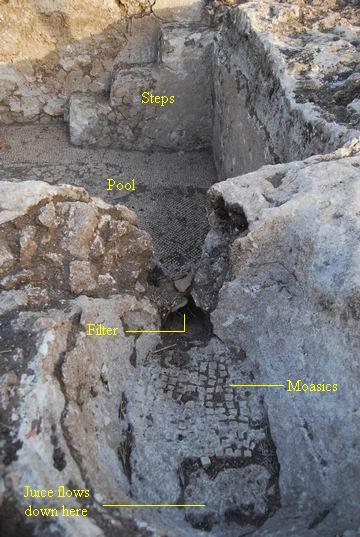 The following lists a sample of the sites with winepresses that are featured in BibleWalks. Click on the site’s name to see more information on each site.

A huge winery factory, dated to the Byzantine period, was unearthed here. This is the largest ancient winery found to date in the world, producing an estimated 2 million liters per year.

More sites will be added…

These are dozens of references to wine, and many others for winepresses. Wine is significant to Jewish and Christian cultures. Wine making was one of the important industries in the Biblical times –

Num 18:27: “And this your heave offering shall be reckoned unto you, as though it were the corn of the threshingfloor, and as the fulness of the winepress“.

Judg 6:11: “And there came an angel of the LORD, and sat under an oak which was in Ophrah, that pertained unto Joash the Abiezrite: and his son Gideon threshed wheat by the winepress, to hide it from the Midianites”.

Judg 7:25: “And they took two princes of the Midianites, Oreb and Zeeb; and they slew Oreb upon the rock Oreb, and Zeeb they slew at the winepress of Zeeb, and pursued Midian, and brought the heads of Oreb and Zeeb to Gideon on the other side Jordan”.

Judg 9:27: “And they went out into the fields, and gathered their vineyards, and trode the grapes, and made merry, and went into the house of their god, and did eat and drink…”.

2 Kings 6:27: “And he said, If the LORD do not help thee, whence shall I help thee? out of the barnfloor, or out of the winepress?”

Job 24:11: “Which make oil within their walls, and tread their winepresses, and suffer thirst”.

Is 5:2: “And he fenced it, and gathered out the stones thereof, and planted it with the choicest vine, and built a tower in the midst of it, and also made a winepress therein: and he looked that it should bring forth grapes, and it brought forth wild grapes”. It is recommended to read the whole chapter, since it revolves around wine.

Is 63:3: “I have trodden the winepress alone; and of the people there was none with me: for I will tread them in mine anger, and trample them in my fury; and their blood shall be sprinkled upon my garments, and I will stain all my raiment”.

Jer 48:33: “And joy and gladness is taken from the plentiful field, and from the land of Moab, and I have caused wine to fail from the winepresses: none shall tread with shouting; their shouting shall be no shouting”.

Hos 9:2: “The floor and the winepress shall not feed them, and the new wine shall fail in her”.

Zech 14:10: “All the land shall be turned as a plain from Geba to Rimmon south of Jerusalem: and it shall be lifted up, and inhabited in her place, from Benjamin’s gate unto the place of the first gate, unto the corner gate, and from the tower of Hananeel unto the king’s winepresses“.

Mt 21:33: “Hear another parable: There was a certain householder, which planted a vineyard, and hedged it round about, and digged a winepress in it, and built a tower, and let it out to husbandmen, and went into a far country”

Rev 14:20: “And the winepress was trodden without the city, and blood came out of the winepress, even unto the horse bridles, by the space of a thousand and six hundred furlongs”.

Rev 19:15: “And out of his mouth goeth a sharp sword, that with it he should smite the nations: and he shall rule them with a rod of iron: and he treadeth the winepress of the fierceness and wrath of Almighty God”.