A small pointed hill located  near the northern rim of Makhtesh Ramon. Remains of an Early Bronze Age village.

This small hill is located on the west side of the town of Mitzpe Ramon, near the northern rim of Makhtesh Ramon. The shape of the pointed hill gave its name – Mount Camel  (Hebrew: Har Gamal).

An observation platform is located on its top, offering great views of the Makhtesh (geological crater). Remains of an Early Bronze Age village are located on its northern foothills.

The site is located on the north west of Makhtesh Ramon, on the west side of Mitzpe Ramon town. It is a cone shaped hill, 895m above sea level, about 40m above the height of the town. An access road leads from Har Gamal  avenue up to a parking place on the foothills of Gamal Hill. 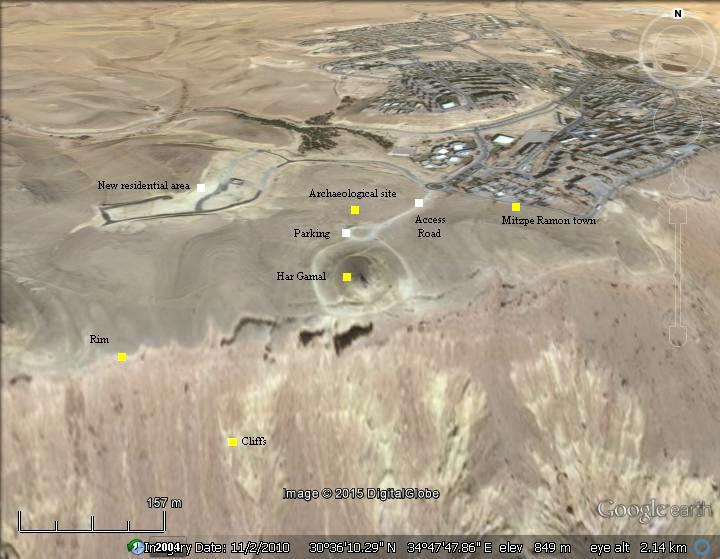 The large Ramon Makhtesh (geological crater)  is located in the center of the Negev desert, having an arid climate with 30mm annual precipitation. The structure of the area is an anticline – a geological fold that is convex up – with a central eroded valley, drained on its east side. The Makhtesh is 40KM long by 9KM wide, with steep walls of 400m height bounding the valley. This geological erosion cirque was created through a natural process over a period of 200 million years. The earliest layer of the Makhtesh is of the Jurassic period (201.3-145 million years). It is 400M deep: its rim is ~900M above sea level, while the floor of the crater is at an altitude of ~500M.

Gamal Hill was created by a volcanic eruption, which occurred outside of the present erosion cirque. The Gamal hill and its surroundings were shaped by lava flow (flowing southwards) and pyroclastics (fast moving flow of hot gas and rock) . This volcanic activity happened in the Cretaceous period (145-66 million years ago), following the Jurassic period.

A small village of hunters gatherers and shepherds was located at the west foothills of Gamal Hill.  A dozen or so of well preserved structures were identified on the north side of Gamal Hill and on its foothill.

This ancient village is located near an ancient camel trail, which descended down to the bottom of the Makhtesh crater. The trail passed through the Ra’af wells – the main water supply in Ramon. From the wells the trail led to the quarries where minerals and gems were extracted in ancient times.

The camel (Gamal) was one of the main transportation vehicles in the ancient times, and was domesticated during the 3rd Millennium BC. The animal was referred many times in the Bible while describing property (the camel was an important asset) or travel. Their ability of carrying heavy cargo due to their strength, the ability to handle the dry conditions of the desert area with few stops for water – made them the best pack animals in the ancient times. A typical number of camels (50,000!) and relative ratio  to other beasts (25 more times than asses) can be seen in a description of the battles of Reuben tribe against the Hagrites (1 Chronicles 5 21): “And they took away their cattle; of their camels fifty thousand, and of sheep two hundred and fifty thousand, and of asses two thousand, and of men an hundred thousand”. 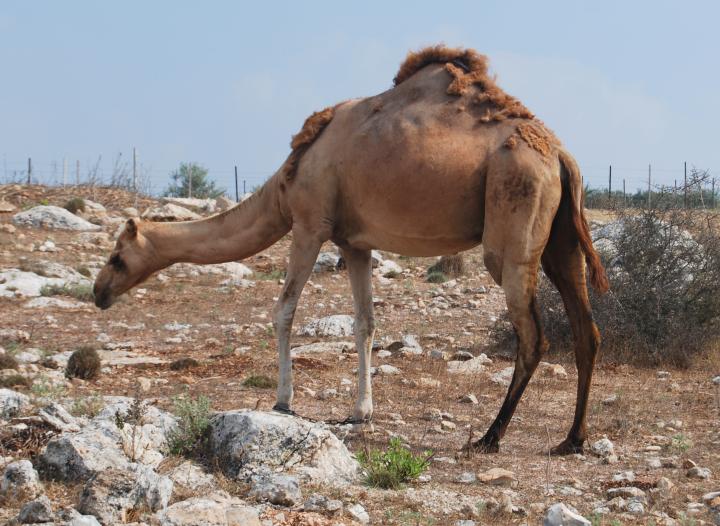 The ancient site at Gamal Hill was excavated in the 1990s by a team headed by Prof. Steve Rosen of the Ben-Gurion University. Reconstruction of some of the structures was performed by Alon Ben Zvi, a local resident who works for the IAA, with the assistance of local volunteers.

A drone captured the hill nicknamed “Gamal Hill” (Mount Camel) from the north side. On top of the hill is an observation place, with great views of the Makhtesh Ramon crater and the surroundings. 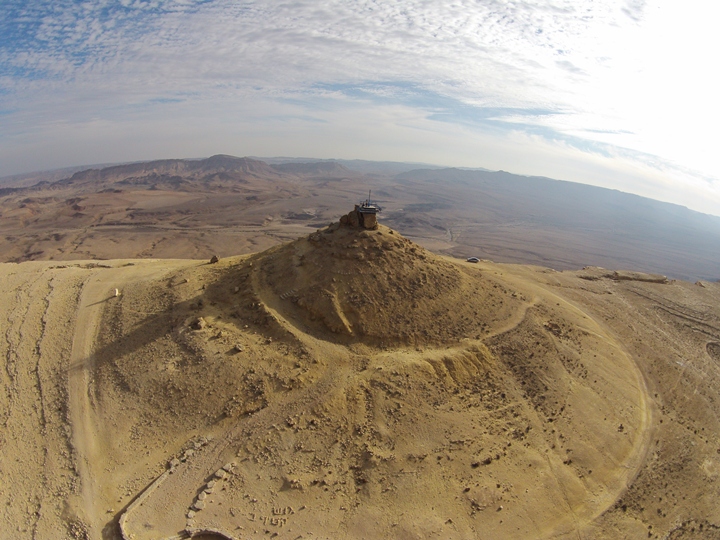 The hill is located close to the rim, on the west side of the town.  On its north side are remains of a Early Bronze Age hunter-gather village, as indicated by the line of stones seen in the foreground. 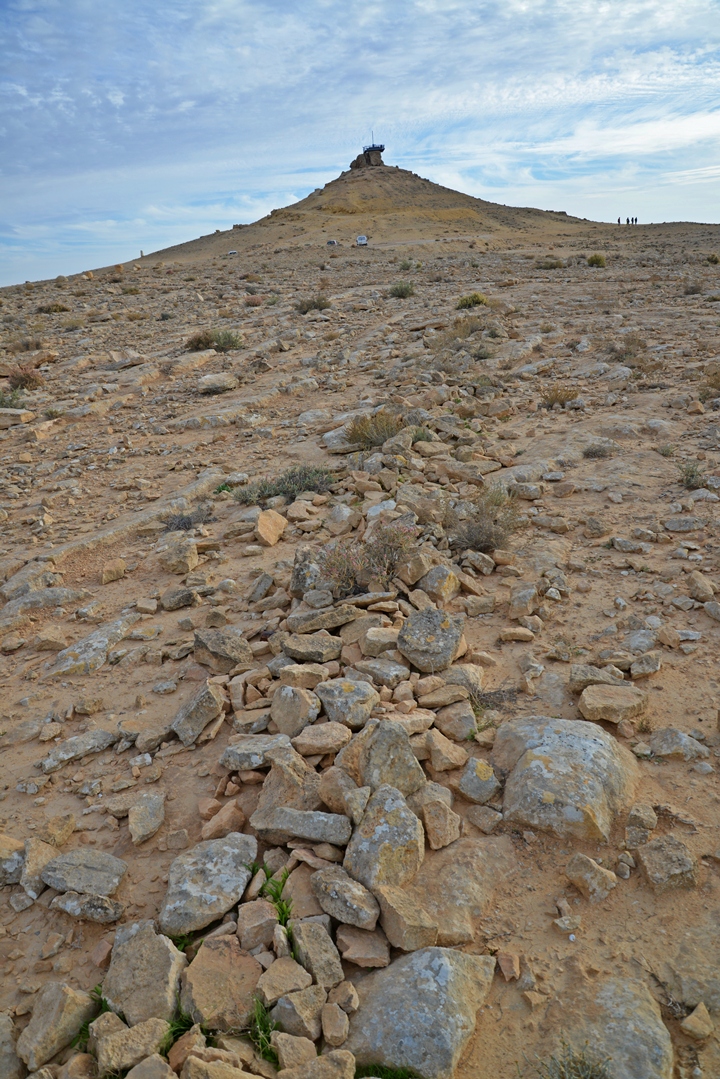 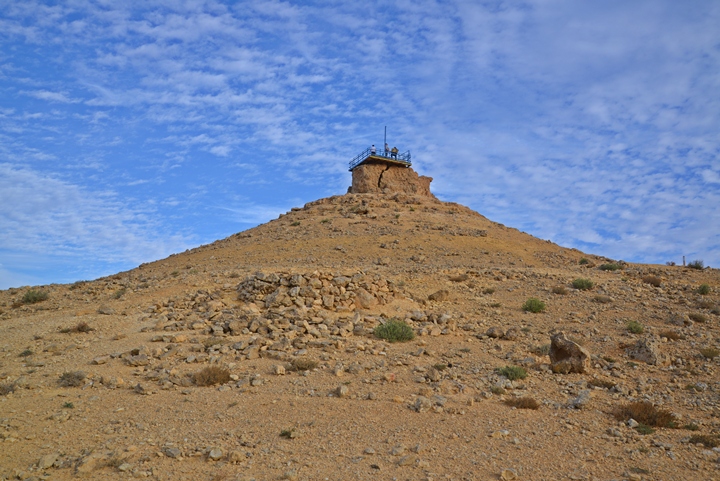 An lookout platform was built on top of Gamal Hill. 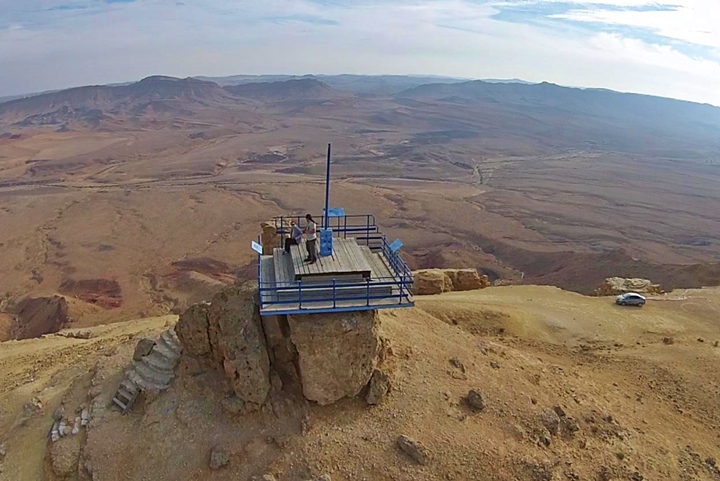 From the platform are great views of Makhtesh Ramon. Here, a view towards the south side. 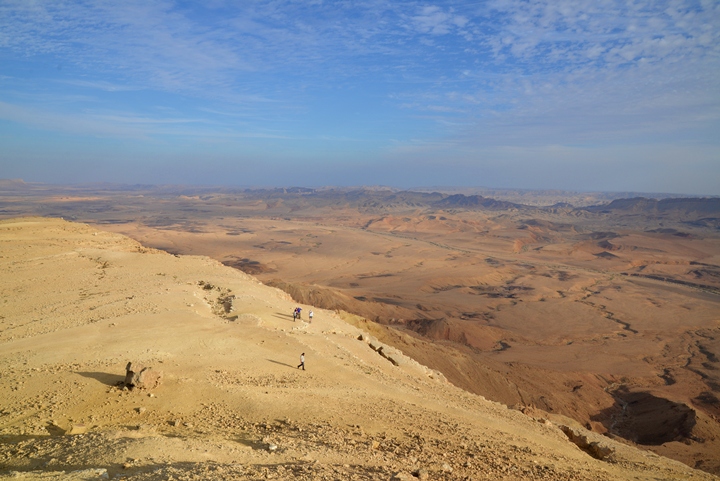 To the north east are buildings of the town of Makhtesh Ramon. 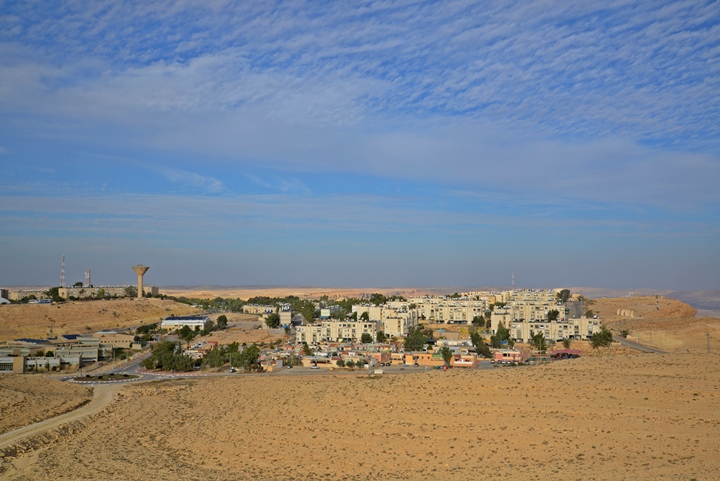 Along the north rim of Makhtesh Ramon are sculptures and statues, a kind of open air art museum.  As part of this initiative, spiritual signs are posted on three sides of the platform. This one reads “Everywhere you look see yourself”.  In this amazing place, there is indeed some truth in this message… 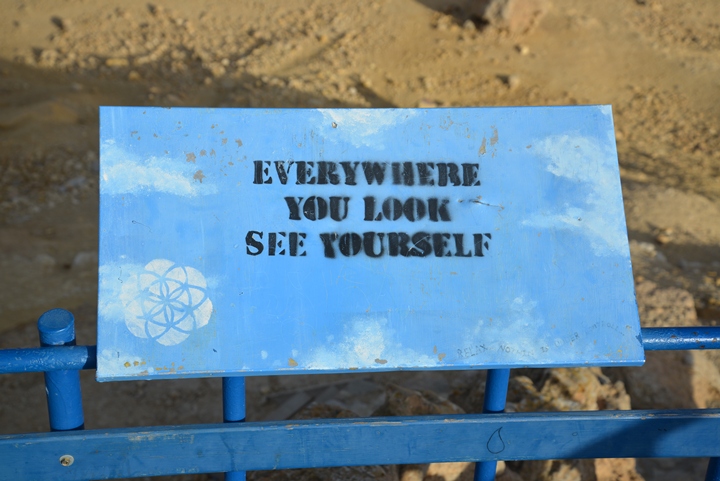 On the foothills we noticed an arrangement of stones spelling a phrase in Hebrew. It reads: “Gush Katif with Love”, commemorating the bloc (Gush) of 17 settlements that were evacuated from Gaza strip following the  Israeli disengagement of 2015. 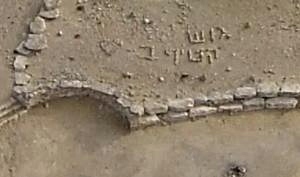 One of the young visitors decided to climb on a rock overlooking the crater. 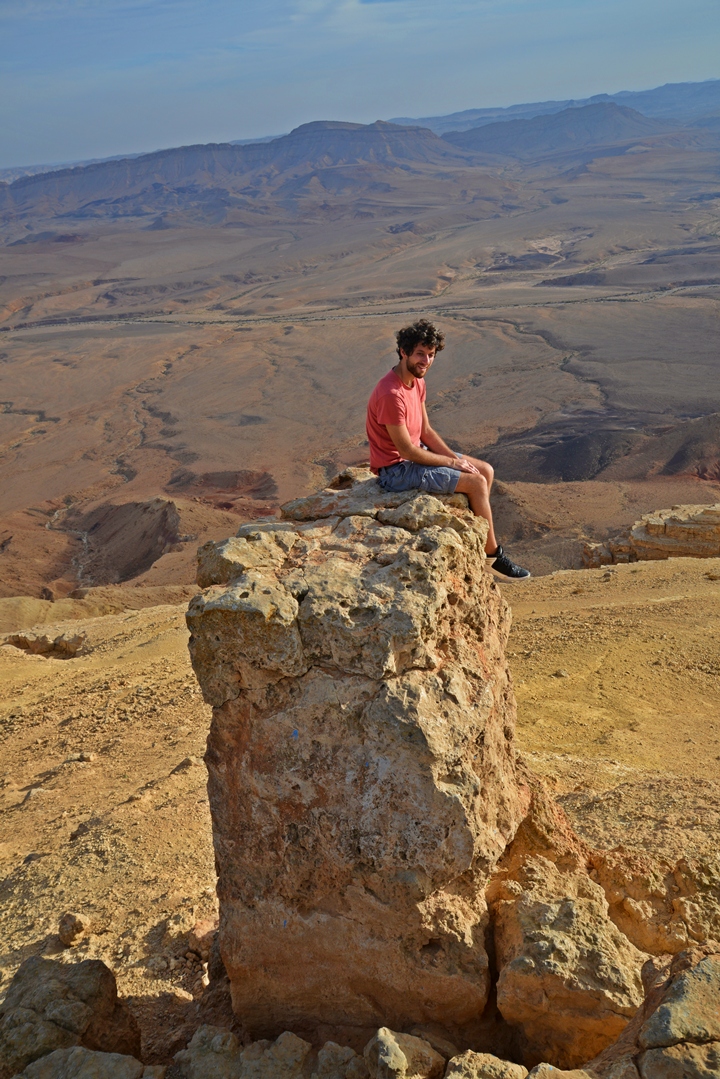 Gamal Hill is situated above the abyss  of the crater. Along the rim of the crater is a great place to look down into the crater. Be careful here, as a tragic event occurred here in April 2009, when a 40 years old visitor fell down 40m to his death at an unfenced spot. 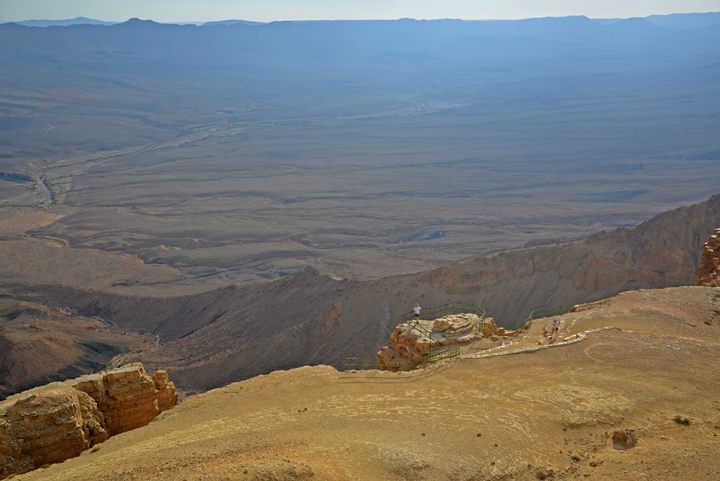 A panoramic view of Makhtesh Ramon from Gamal hill  is seen in this next photo. Pressing on this picture will pop up the panoramic viewer. Using this flash-based panoramic viewer,  you can move around, zooming in and out – viewing the site in the amazing full screen mode (like you are really there).   It may take minutes to upload, but then its worth the waiting time.

The next photo from the west side shows a section that separated  from the hill – a huge crack in the walls of the Makhtesh. 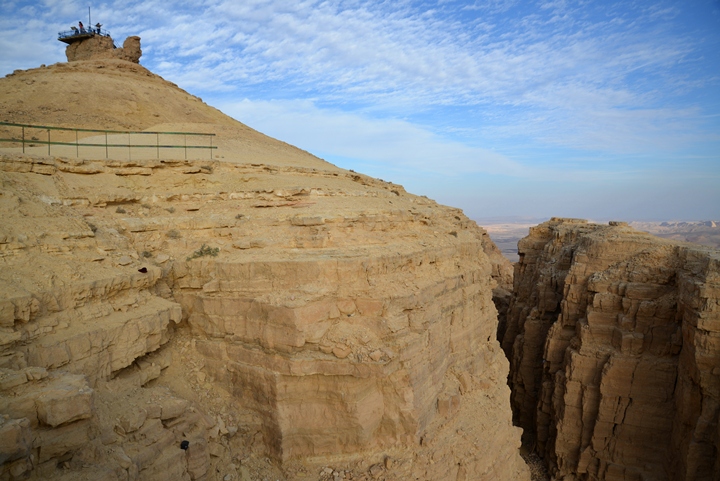 Closer views of the crack are in the next photos. 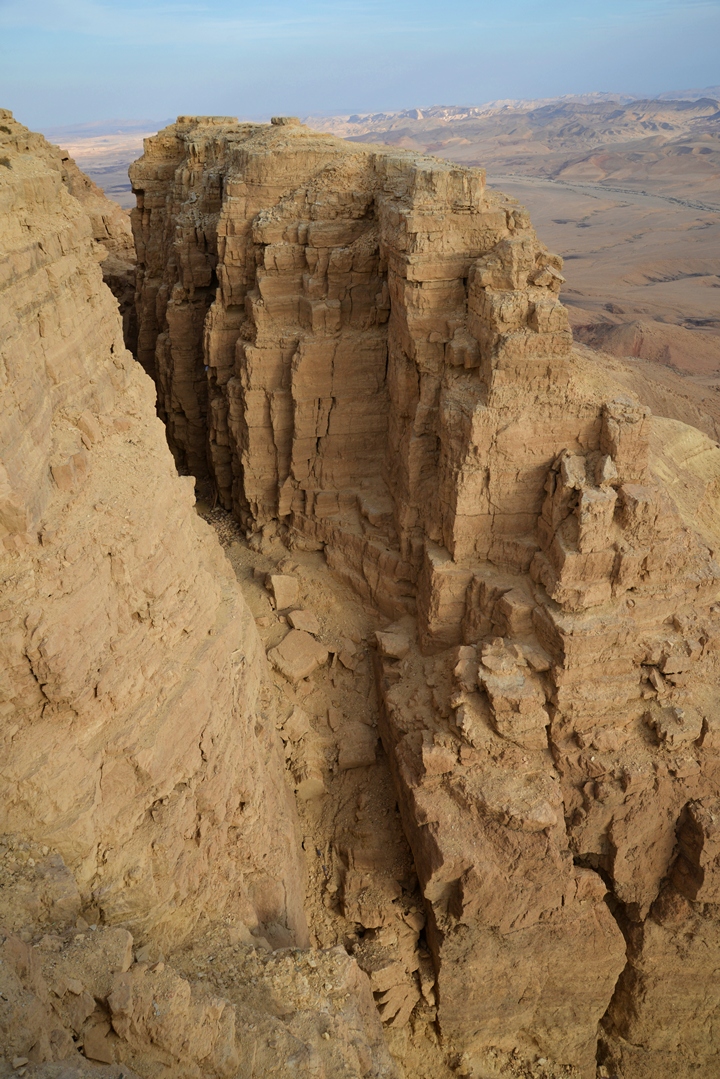 A small village of hunters gatherers and shepherds was located at the west foothills of Gamal Hill.  It is dated to the Early Bronze period, at the 3rd Millennium BC. This drone view shows the main section of its ruins, to the north of the parking place. This village may have been used only during the colder winter season, while during the hot months of the summer and spring the inhabitants would have wandered to cooler areas. 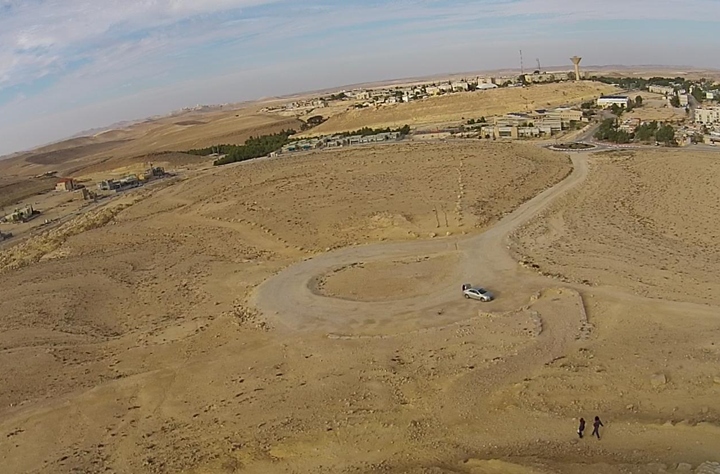 Below is a view from the ruins towards the Gamal hill. Notice that the rocks on the foreground are not natural – they have been assembled by the Early Man 5,000 years ago. Most of the structures are at this stage in ruins, left over since then.  The lack of soil and modern activities left us with well preserved ruins, that are archaeological treasures. 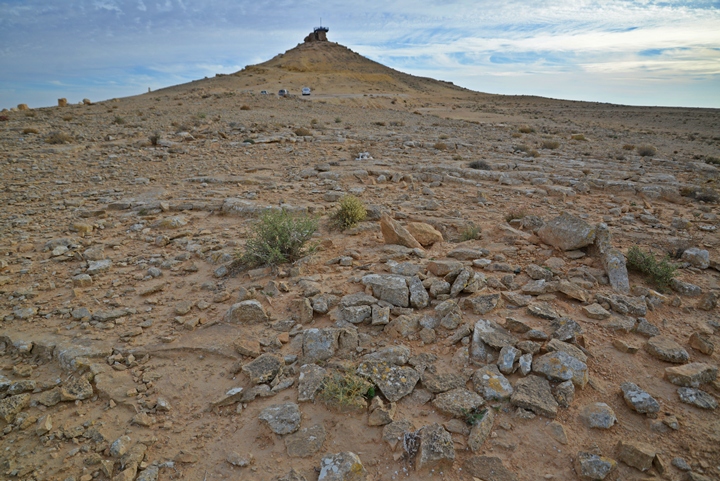 The photo below shows a modern path that leads along the length of the settlement.  There are plans to form an archaeological park here. It is now in early stages of work which may take several years before it is finished.

In the left background are several new houses of a new neighborhood of Har Gamal. The original plans of the municipality was to build the houses closer to the rim, but a public outcry managed to block this outrageous real estate plan. 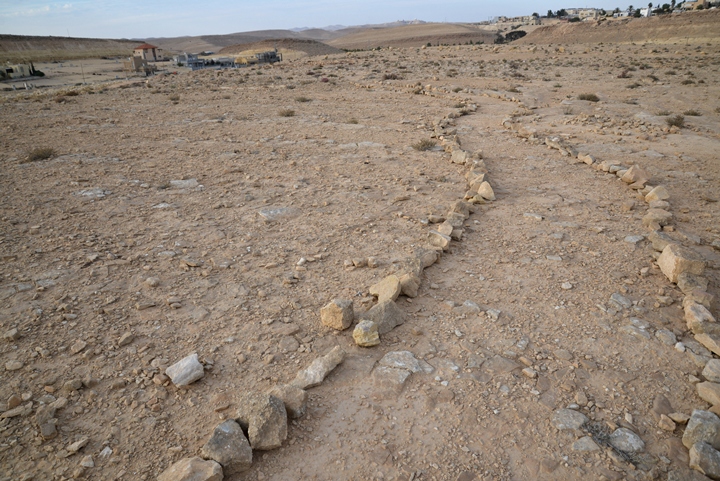 The first structure, seen in the following photo, is located close to the parking place. It was cleaned and documented by the archaeologists, but not yet reconstructed. 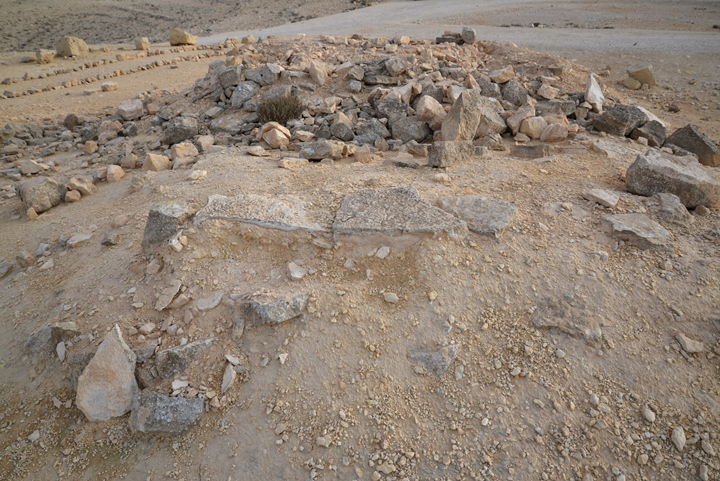 The next structure was recently reconstructed, by arranging the stones into a round hut. The walls of the house are of stone, while the roof is made of palm tree leaves. 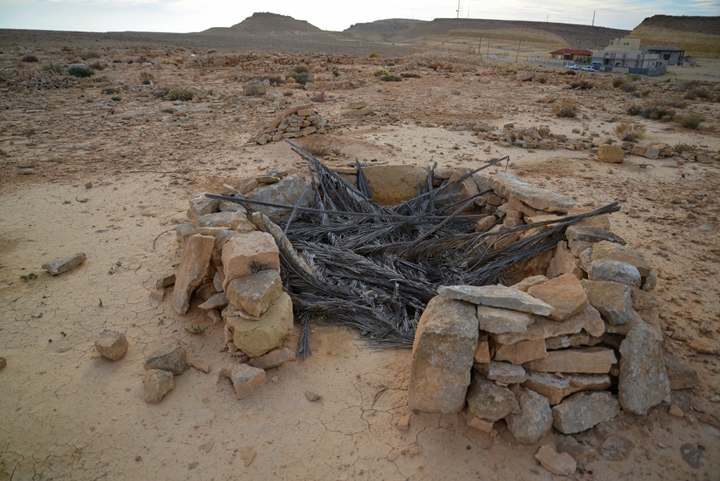 Other bases of structures were reconstructed here, as seen in the following photos. 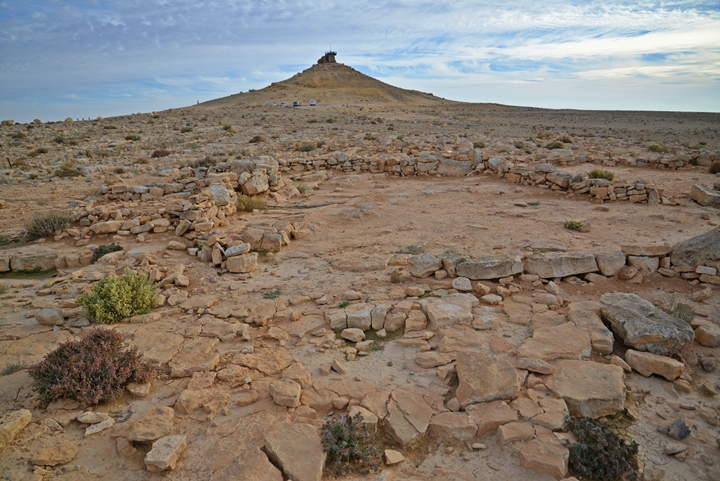 Closer to the top of the hill are bases of another circular structure. 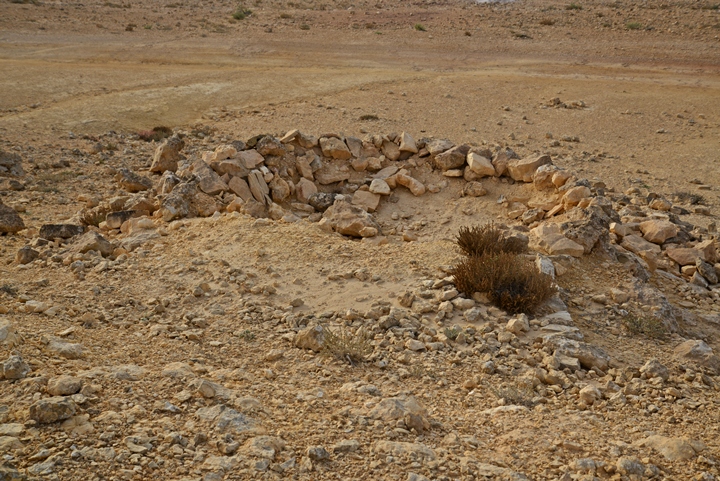 The month of November 2015  was blessed with unusual heavy rains,  resulting in the early flowering of the wild desert flowers. The following photos are samples of these colorful flowers.  (Identification please!) 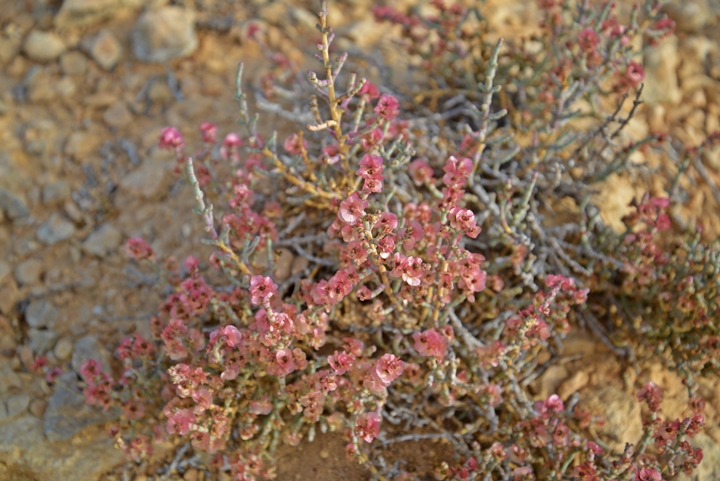 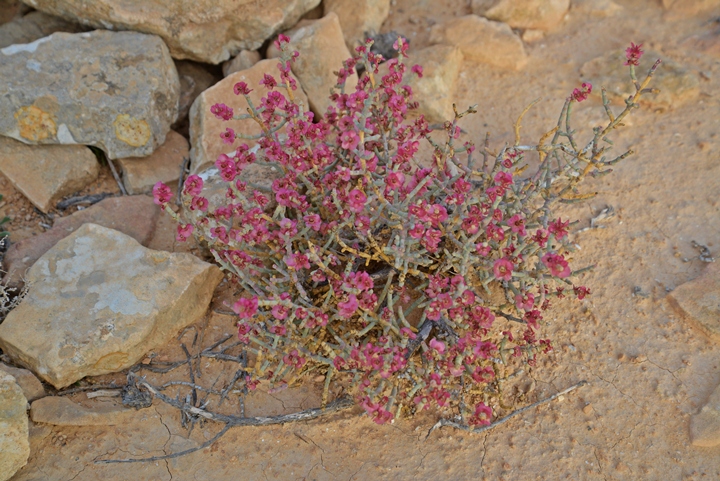 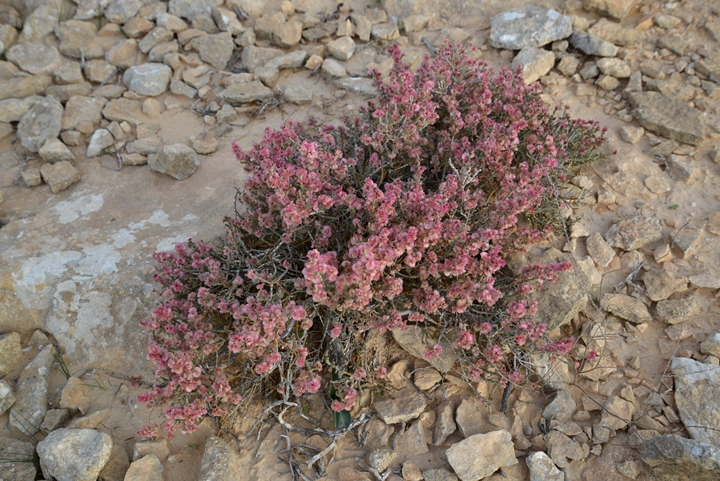 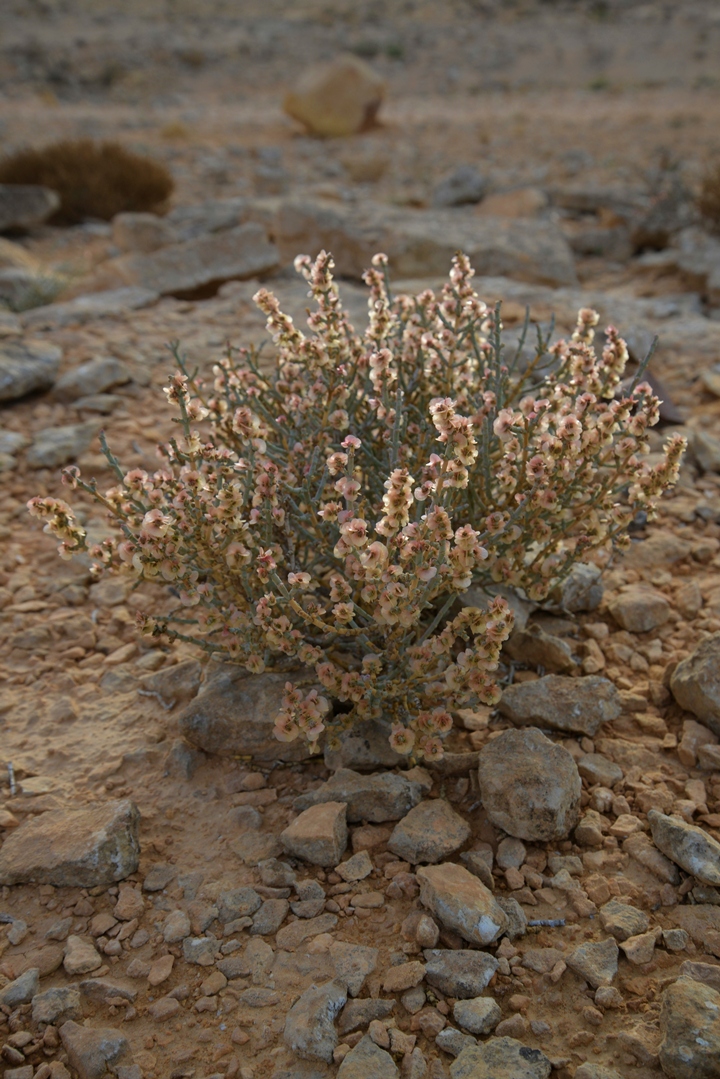 One of the most rememberable scenes from the town of Makhtesh Ramon are the sunsets along the rim of the crater.  We walked from the town towards Gamal Hill, at the time the sun is setting down above the Negev highlands. The sunset  illuminated the site and the area around it with rich red and orange colors. 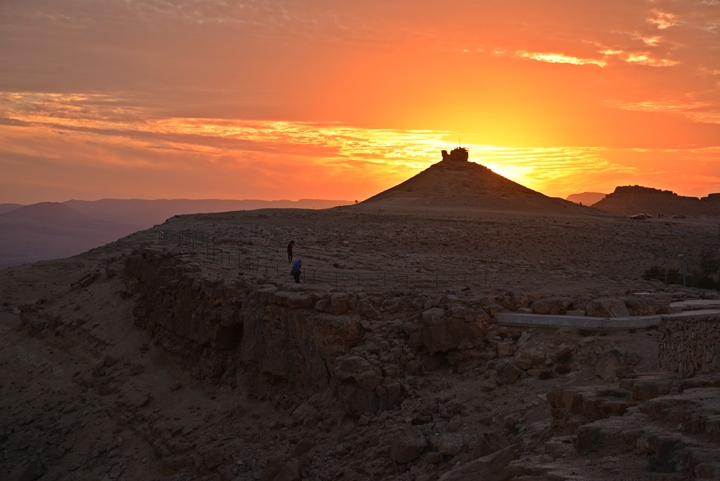 Here are some of the selected scenes, which were taken in chronological order from the moment the sun disappeared behind Ramon Mountain on the west side. 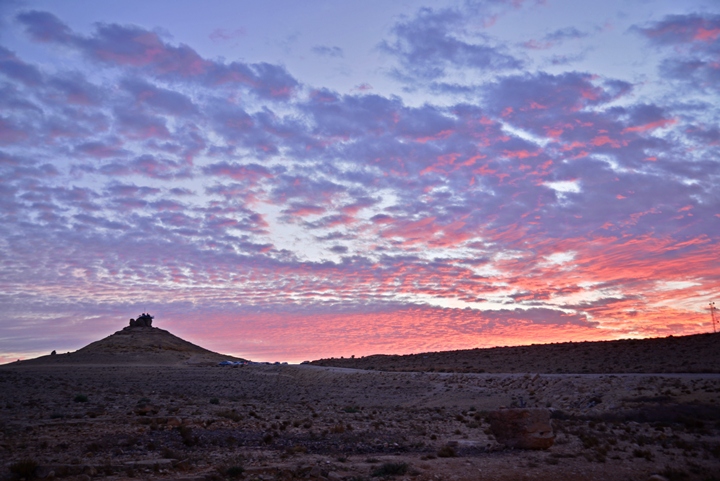 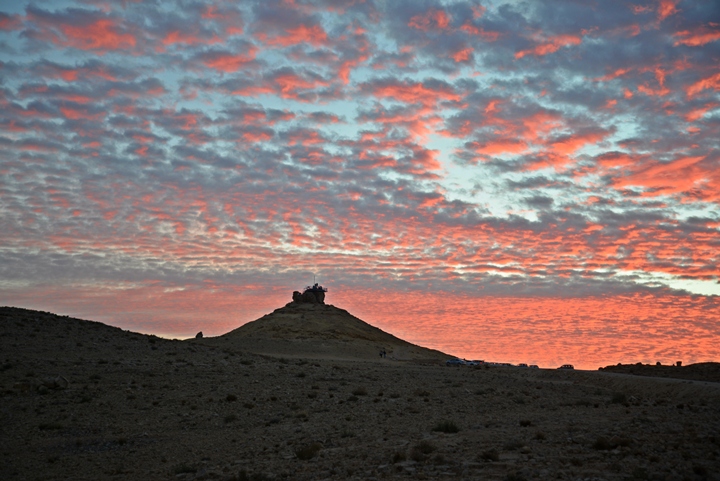 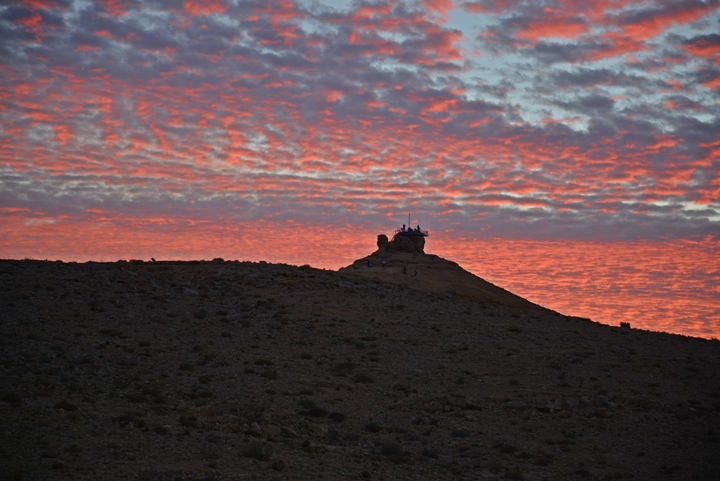 The Hebrew root word “Gamal” also means “pay back”. This is based on the virtues of the camel – its advantages as a pack animal, and the benefits it provides – milk, meat, leather, hair.

The third letter in Hebrew, Gimmel , has a form of a camel and its name shares the same letters.

Therefore, we can assume that camel may have been the source of the form of this letter.

BibleWalks.com – Revealing the secrets of the Negev desert