Secacah (Sekhakha),  part of Biblical Judea, is identified in the ruins of Karem es-Samra (“black vineyard”), in the valley of Horkania, west of the ancient fortress.

The Iron Age II and Roman settlement of Secacah (Sekhakha), one of the cities in Judea referred in the Bible,  is identified by many scholars in the ruins of Karem es-Samra (Arabic for the “black vineyard”). These ruins, also named al-Ajaz, are located in the valley of Horkania, west of the ancient fortress. Its location is near an ancient route from Jerusalem, via the Kidron brook, down to the Dead Sea.

The ruins are located on the side of the road that crosses the valley of Horkania, from north to south. You can get there only on weekends, by taking the south turn to Nebi Musa and then continue 10KM south. 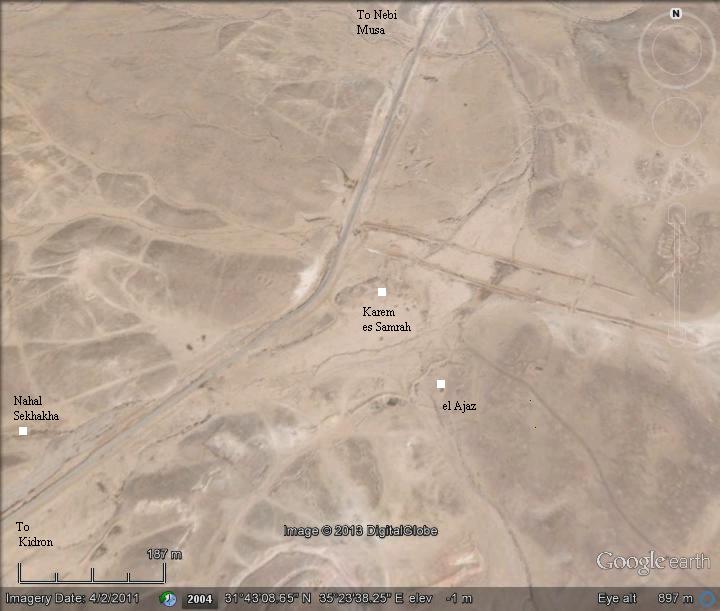 Sekhakha was referred in the Bible as one of the cities of the tribe of Judah  (Joshua 15 20, 61): “This is the inheritance of the tribe of the children of Judah according to their families… In the wilderness, Betharabah, Middin, and Secacah“.

There are several suggestions for the identification of Sekhakha/Secacah. One candidate, which is described in this page, is the ruins of Khirbet Karem es-Samra (or Sumrah), an Iron Age site II which is located along Nahal Sekhakha in the center of the plains known as the valley of Horkania. Another candidate is Qumran, the famous site of the scrolls and the Essenes.

As for Middin, scholars identify it in the ruins called Khirbet Abu-Tabk (or Tubk). It is located 3 KM north-north-east of Samra on the south side of the valley of Qumran. Ruins of an  Iron Age II fortress are found there.

A fortress and farm, dated to the Roman period, are located on a hill above the ancient site (el Ajaz). The remains are also dated to the early Arab and Crusaders period. Water dams and reservoirs are found along the valley of Nahal Sekhakha (Wadi Abu Shualeh).

Sekhakha/Secacah is also a landmark mentioned in the copper scroll (numbered #3Q15), which lists a collection of treasures buried in the desert during the Hasmonean or Early Roman period.  (See details in a separate page).

Two stepped tunnels were found on the eastern section of the canyon of Nahal Sekhakha, north of the Horkania fortress. They were thoroughly excavated and were dated to the Iron Age II or the Hasmonean period. At this time their purpose is not known – see details in a separate page.

Conder and Kitchener surveyed this area during the Survey of Western Palestine in 1873. A section of the SWP map of  the site is attached here. 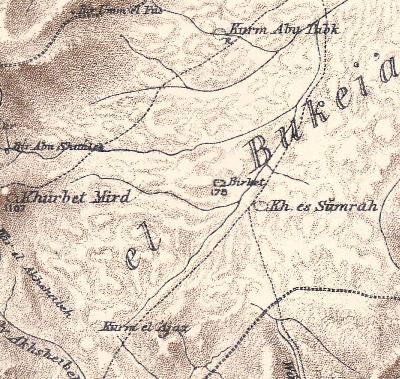 Part of map Sheet 18  of Survey of Western Palestine,

They reported on their account of  the area of Horkania (SWP, Vol 3, p 213). We have added comments in italic.

The double dashed line on the lower side of the map is a section of an ancient route, known as “Nukb Feshkhah” (the ascent of Feshkha). It started near the springs of el-Feshkha, south of Qumran, and ascended thru Horkania valley and Mar Saba up to Jerusalem.

The site is located in the dry and barren valley of Horkania. Since the valley is a firing zone for the army, the allowed access to the site is only during weekends. Furthermore, remains of mortars and rockets are scattered all around, so be careful where you are stepping.

The valley of Horkania (named in Arabic: “el Bukeia”) stretches north to south in parallel to the Dead Sea. Its average height is about 10-20m, while the Dead Sea is about -370m (under sea level).

This photo was taken from the valley of Nahal Sekhakha, several kilometer to the west of the site. Along the hillside are scattered rocks, part of an ancient cemetery. 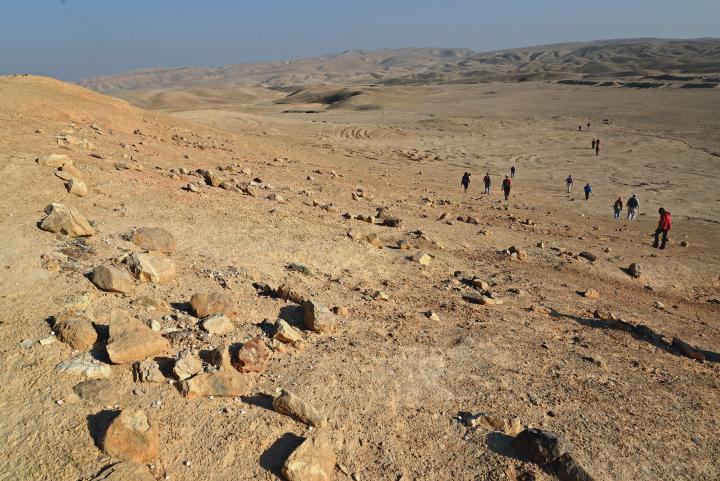 A view of the valley around the site, as seen from the fortress of Horkania, is shown here with indication of the points of interest: 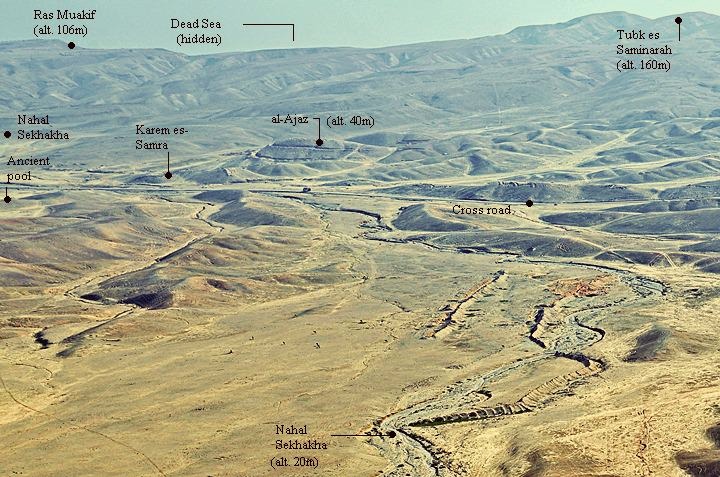 The narrow road along the valley passes near the site, which is seen here just behind the two Bedouin donkey riders.

You can notice the remains of the ancient wall, made of large unhewn rocks, along the foothills. 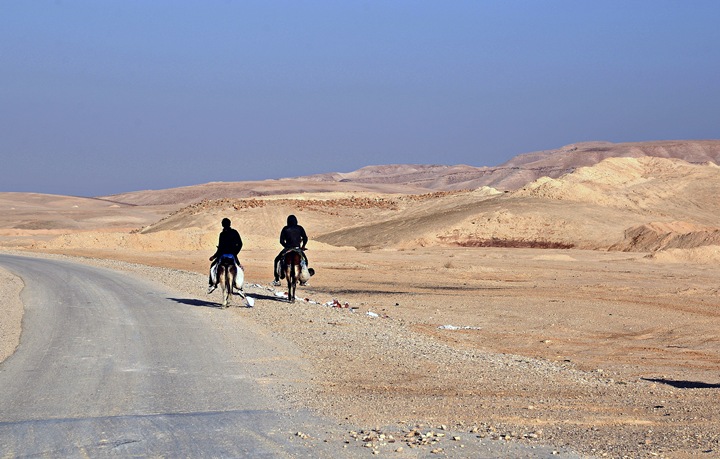 A closer view of the north side of the ruin is seen here. There are few noticeable remains except for the scattered rocks, and the site was not excavated. The site is dated to the Iron Age II period – the time of the Israelite Kingdom, and may have been a fortified farm. 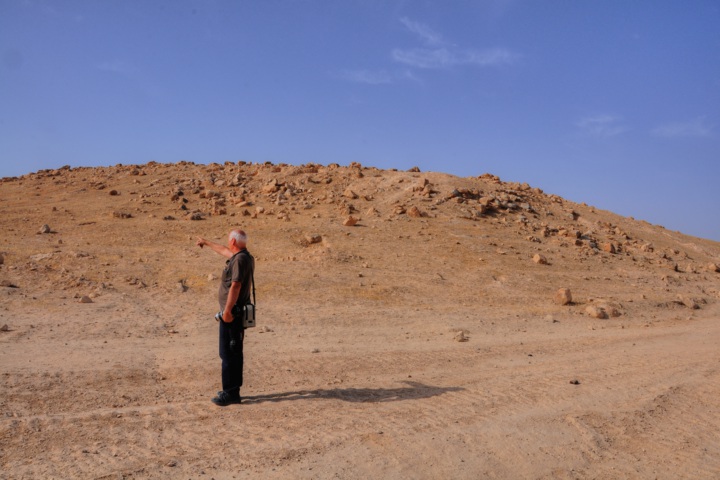 The walls around the site are composed of these large stones. The wall is a casemate design (two rows of walls with rooms between the walls) – typical of the Iron Age II fortifications. 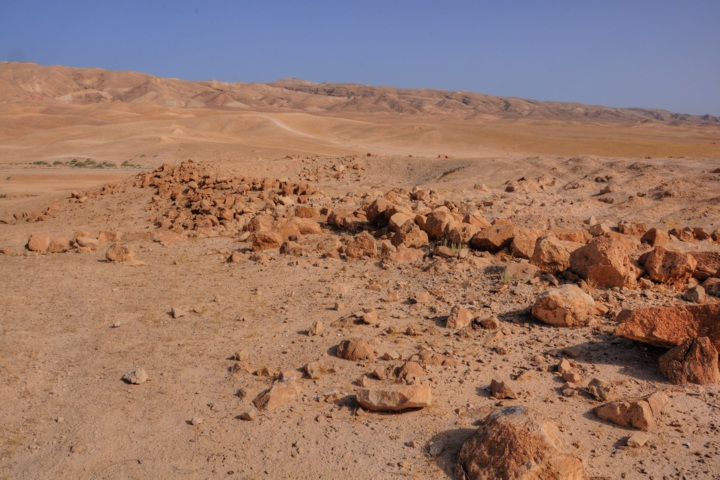 A higher hill (“el Ajaz” – the miracle) is located to the south-east of the ruins. Its height is height: 40m, 30m above Kh. Samra.  This may have been the upper city of the Iron settlement, and was also a fortress during the Roman period.

The hill is cut by a road and fortifications made by the military, who exercise in the valley during the week. 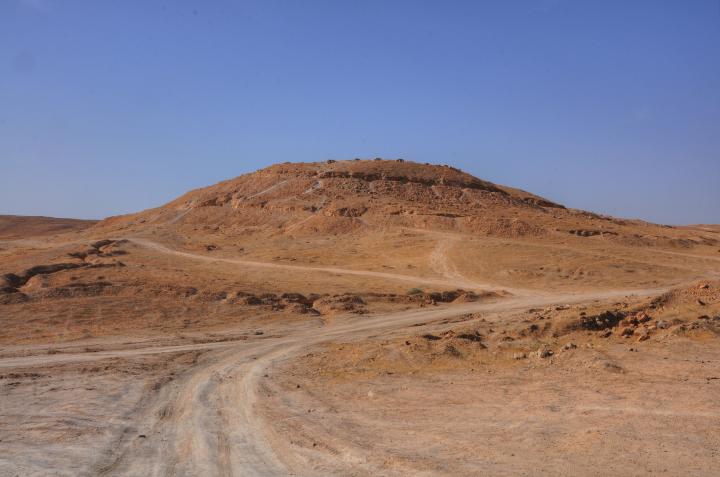 The whole area is littered by remains of bombs and shells. Some of them may be live, hence it is dangerous to walk around. 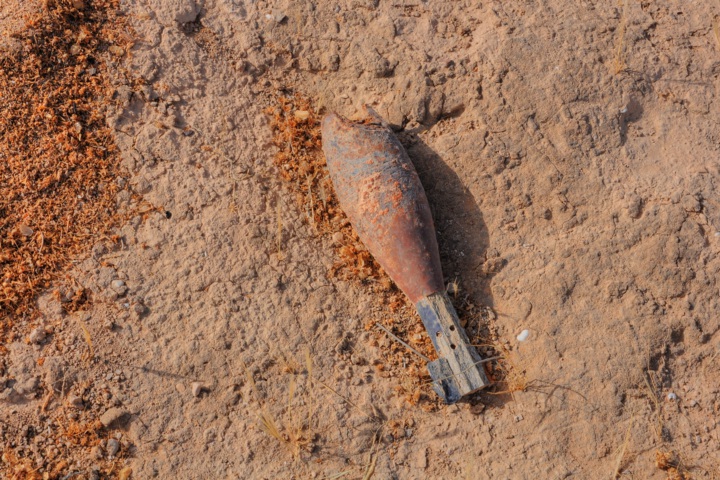 Around the site and across the valley of Horkania are camels, who graze here. They are owned by the Bedouins who live along road #1. 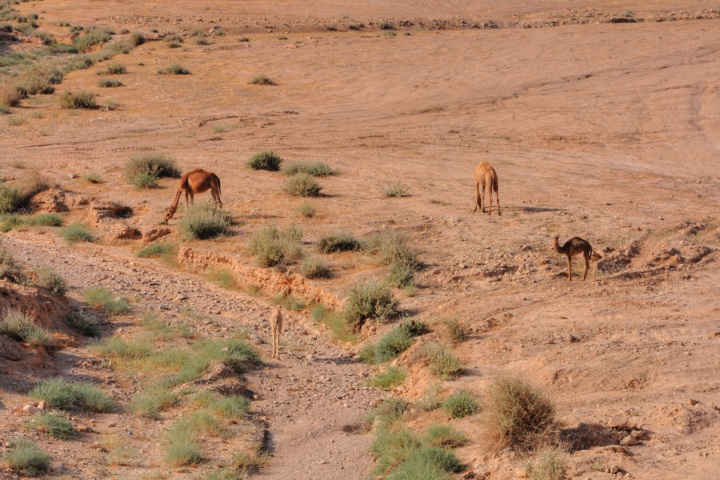 The camel was one of the main transportation vehicle in the Biblical times, and is referred many times in the Bible while describing property (the camel was an important asset) or travel. Their ability of carrying heavy cargo due to their strength, the ability to handle the dry conditions of the desert area with few stops for water – made them the best pack animals in the ancient times. A typical number of camels (50,000!) and relative ratio  to other beasts (25 more times than asses) can be seen in a description of the battles of Reuben tribe against the Hagrites (1 Chronicles 5 21):”And they took away their cattle; of their camels fifty thousand, and of sheep two hundred and fifty thousand, and of asses two thousand, and of men an hundred thousand”.

The Hebrew name – “Gamal” – is retained with little variation in all languages: it was transformed in Greek to “Kamelos” and then it came to be “camel” in English as a shorter form. 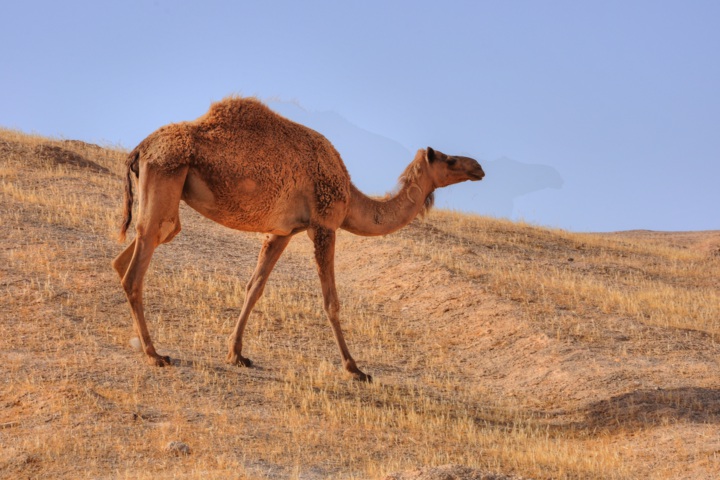 The meaning of the Hebrew name “Sekhakha” is: an open sided shed.

BibleWalks.com – Have Bible, will Travel!