Kiryat Luza is a modern Samaritan village, located on the foothills of the Samaritans’ Holy Mt. Gerizim.

Kiryat Luza is a modern Samaritan village, located on the foothills of Mt. Gerizim. It was built in the 1980s, close to the Samaritan Holy sites.

Kiryat Luza is located on the northwest side of Mt Gerizim archaeological park. The access to the village is through the road that leads to the Har Brakha community.

Another recommended place to visit is Joseph lookout at the side of Tell er-Ras. 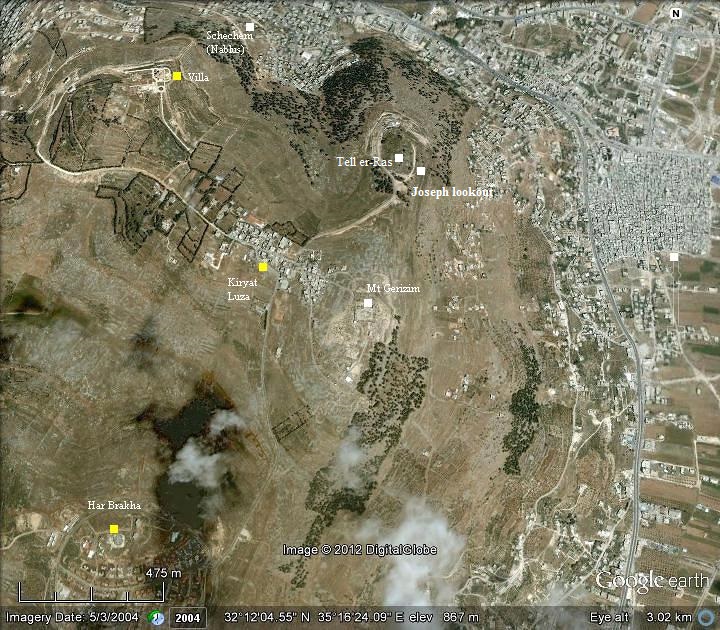 Mount Gerizim is a Holy hill, located on the south side of Shechem (today’s Arabic city of Nablus). On the opposite side of Shechem is Mount Ebal. Both of these hills witnessed the mass ceremony held by Joshua after his entry to Canaan, following the return of the Israelites from the Exodus in Egypt. The ceremony took place according to the commands Moses received earlier from God – to gather the people between the two facing hills – Gerizim and Ebal – and bless the former while cursing the latter.

The blessing of Mt Gerizim is described in the Bible (Deuteronomy 27, 11-13): “And Moses charged the people the same day, saying, These shall stand upon mount Gerizim to bless the people, when ye are come over Jordan; Simeon, and Levi, and Judah, and Issachar, and Joseph, and Benjamin: And these shall stand upon mount Ebal to curse; Reuben, Gad, and Asher, and Zebulun, Dan, and Naphtali”.

Both mountains are about the same height (881m for Gerizim, 940m for Ebal). Between them, in the valley, is the city of Shechem (Nablus). The Canaanite/Israelite city was located to its east (“Tel Balata”).

The Samaritans split from Judaism during the period of the return to Zion from the Babylonian exile at the end of the 5th century BC. They established a temple city on Mount Gerizim, which served as the religious and administrative center for the Samaritans, and substituted the Jerusalem temple.

During the Hellenistic period, with a peak in the 2nd century BC, the city around the temple covered 400 Dunam (40 Hectares) with a population of 10,000, mostly priests who served the temple and supported the Samaritan pilgrimage from Samaria and beyond.

The city was destroyed at the end of the 2nd century BC by the Hasmonean King John Hyrcanus I, and many of the Samaritans were forced to bring back to Judaism. 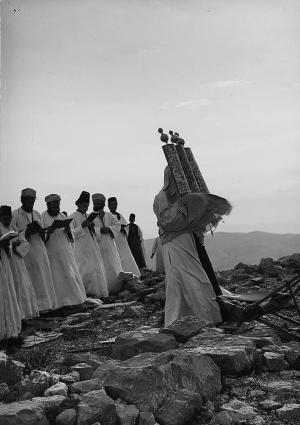 After the Roman conquest, the Samaritans gained again their freedom, and their communities flourished in the region. However, they were  not allowed to rebuilt the temple city.

Luza was a Samaritan dwelling  place, located near their holy sites on the top of Mt Gerizim. It was established at the Persian period, after the Samaritans separated from Judaism following the disputes with the people who returned from the Babylonian exile.

During the Roman times the Samaritans increased in size (a million people) and wealth. They populated Samaria and beyond, with dozens of villages in the Holy Land.   The village of Luza is listed in the “Tolida” – the mediaeval Samaritan history chronicles.

The Samaritans reached a peak from the 2nd century AD to the middle of the 5th century AD.  However, their success brought upon them a fierce reaction from the Christian population. The Byzantine ruler Zenon constructed a church in 484 AD on the ruins of the holy precinct, which caused the Samaritans to mutiny. After 100 years of struggles the Samaritans were forced to convert or were exiled. 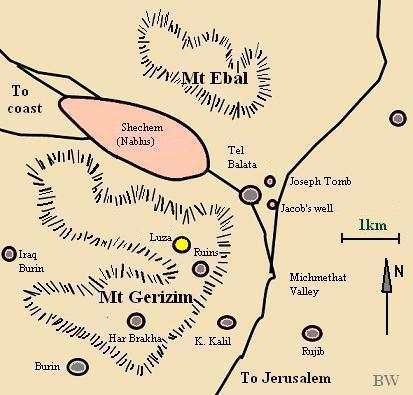 Map of Mt Gerizim area, with Luza indicated by a yellow marker

Luza, as other Samaritan villages, existed until the 7th century AD. The Samaritans became a very small minority and most of them converted to Christianity (Byzantine period) and then to Islam following the Arab conquest.

In the PEF map (1878) the site is listed as “Kh. Lôzeh” – or the ruins of Luzeh. At that time there were only ruins on top of Mt Gerizim.

Kh. Lôzeh is seen here on the right, below the city of Shechem (Nablus), to the northwest of Mt Gerizim (Jebel et Tôr, altitude 2848 ft). 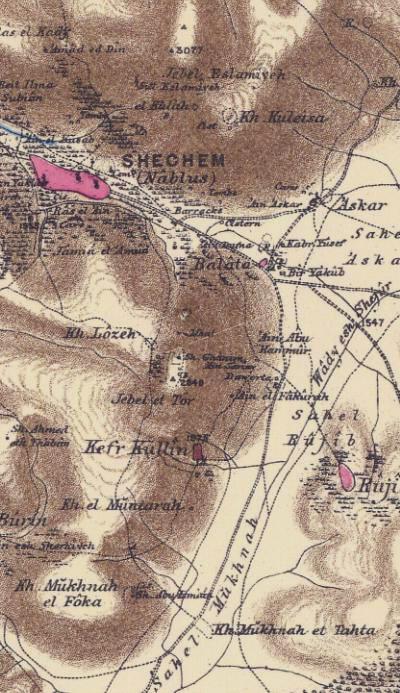 The authors Conder and Kitchener write about Kh. Lôzeh in the  Survey of Western Palestine (Vol 2 p. 169):

“The Samaritans hold that this town stood on Gerizim, and it is mentioned under its old name Luz in the Chronicle, and the Arabic translation gives Lôzeh. This accounts for the existence of the name Khirbet Lôzeh, applied to the heaps of stones round the Samaritan place of sacrifice on Gerizim. The name is generally known ; it is also mentioned by Jerome (‘Onomasticon,’ s. v. Luza). The Crusaders held this to be the Bethel where one of the Golden Calves was erected…”.

In other sections of their report they focus on the details of their survey of Mt Gerizim, which will be detailed in another web page.

The Samaritans of the West Bank dwelt until the late 1980s in Nablus.  Another group of Samaritans live since 1954 in the Israeli town of Holon.  Both groups total several hundred people.

During the riots in the West Bank the Samaritans were harassed by their neighbors in Nablus. They relocated to the  top of the hill, in the proximity of the ancient site of Mt Gerizim. Here they established the  village of  Kiryat Luza  (“Town of Luza”).

Today (2012), there are several dozens of houses, a Samaritan museum and Synagogue.  They hold dual Israeli and Palestinian citizenships. The area of the village and Mt Gerizim is under full Israeli control (aka, “C” zone), and therefore can be accessed by Israelis.

The village of Kiryat Luza is located on the northwest side of the ruins of Mt Gerizim. This view was taken from the ancient site, which overlooks Luza. The western outskirts of Nablus is seen on the far right background, and behind it are the foothills of Mt Ebal. 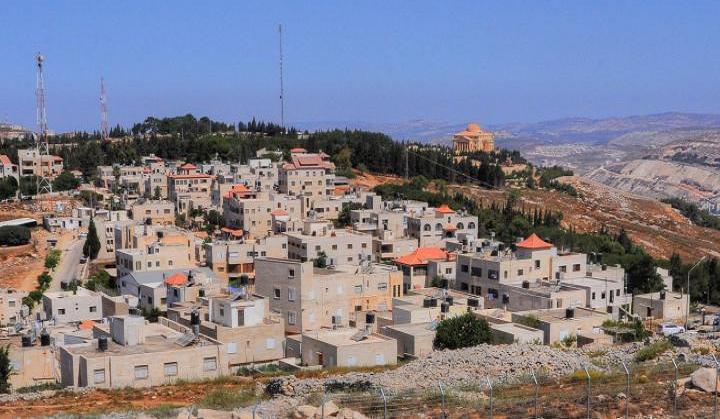 An Italian style villa is also seen on the right of the village, overlooking the city of Nablus/Scechem. This villa was built in 2000 by Munib al-Masri – a wealthy Billionaire from Nablus. 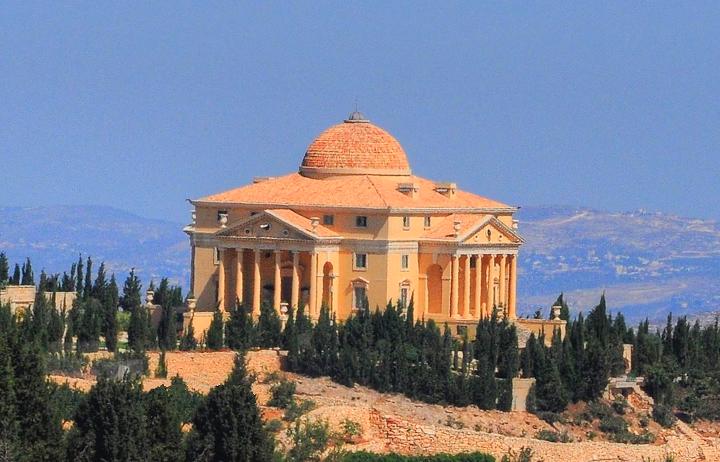 We met these two elders on the way up to the archaeological park on the top of Mt Gerizim. These Samaritans, who were sitting by the side of the road,  speak fluent Hebrew and Arabic, and provided us with explanations and tips.

A Nargileh (Hookah, Shisha, water pipe), seen here in the center, is a common Arabic instrument for smoking flavored tobacco, in which the smoke is passed  through the glass-based basin before it is inhaled. 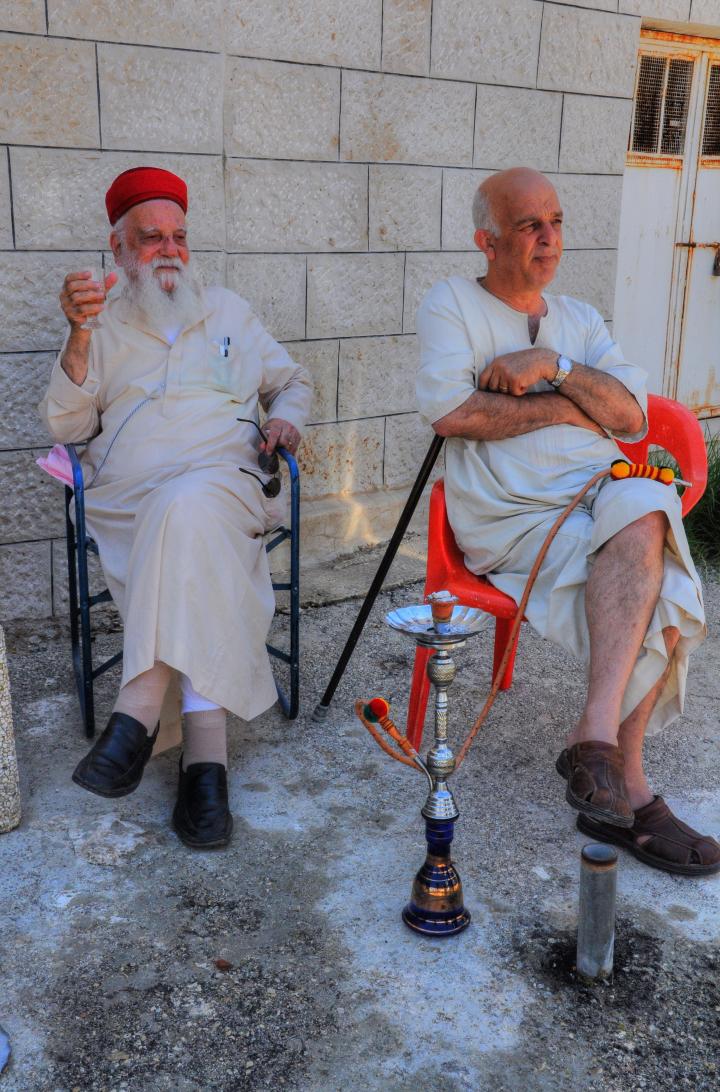 A Samaritan synagogue is located in one of the houses in Kiryat Luza. 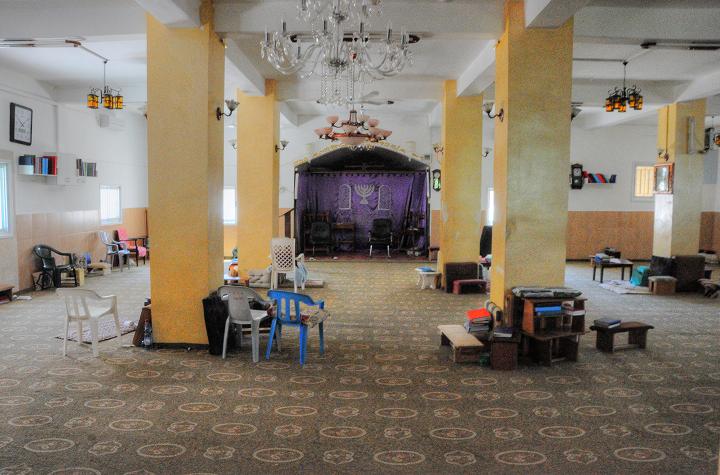 The Synagogue looks very much like a Jewish Synagogue. 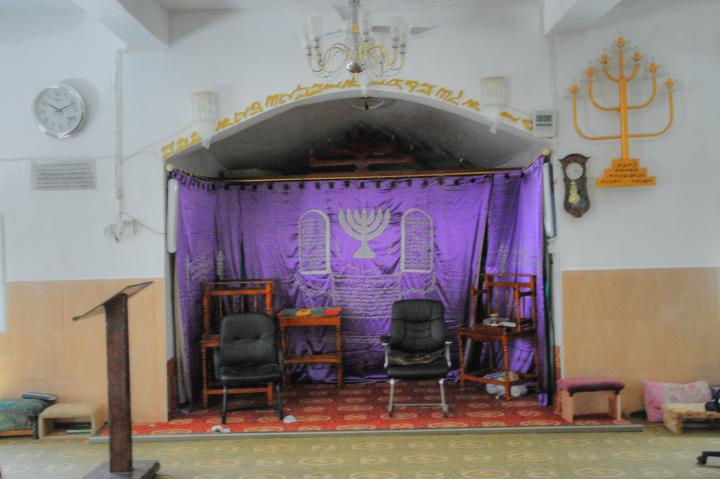 Under the Menorah is an inscription with ancient Samaritan letters, which is still used by the modern Samaritans in addition to Hebrew and Arabic. 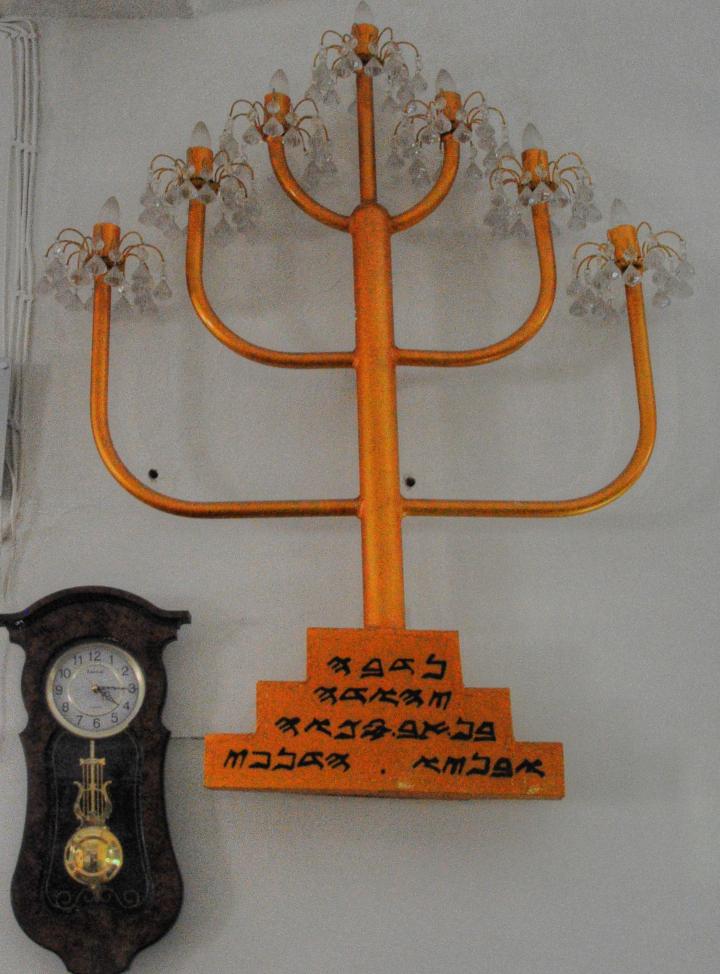 On a fence of one of the houses was a display of the 12 tribes of Israel.  Under each of the icons is the name of the tribe, written in ancient Samaritan letters. The icons of the tribes below are ordered according to the Biblical description, with the first 6 standing on Mt Gerizim to bless, while the other 6 on Mt Ebal to curse  (Deuteronomy 27, 12-13): “These shall stand upon mount Gerizim to bless the people, when ye are come over Jordan; Simeon, and Levi, and Judah, and Issachar, and Joseph, and Benjamin: And these shall stand upon mount Ebal to curse; Reuben, Gad, and Asher, and Zebulun, Dan, and Naphtali”. 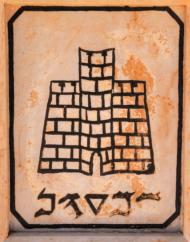 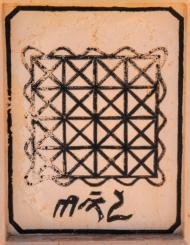 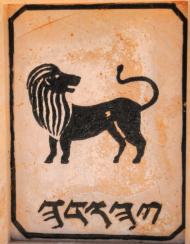 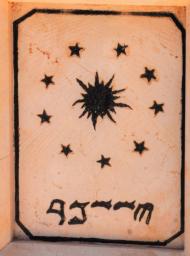 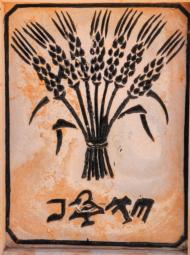 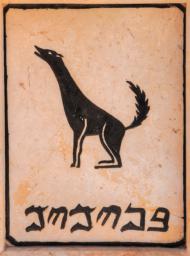 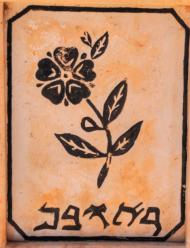 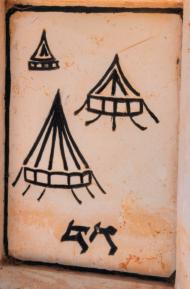 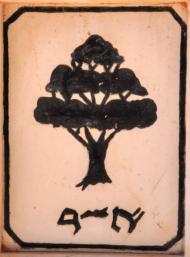 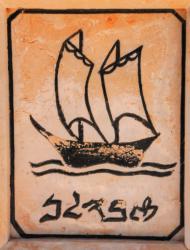 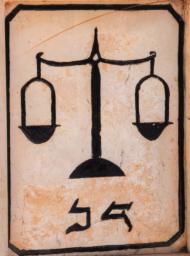 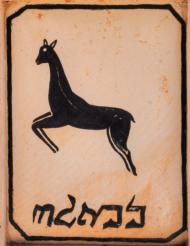 The Samaritan holidays are similar to the Jewish holidays, with slight variations. We have met in September 2016 with some of the locals in Kiryat Luza, and Samir graciously sent us a number of photos of their  Sukkoth (Feast of Tabernacles) holiday.  This photo shows their uniquely decorated booth: 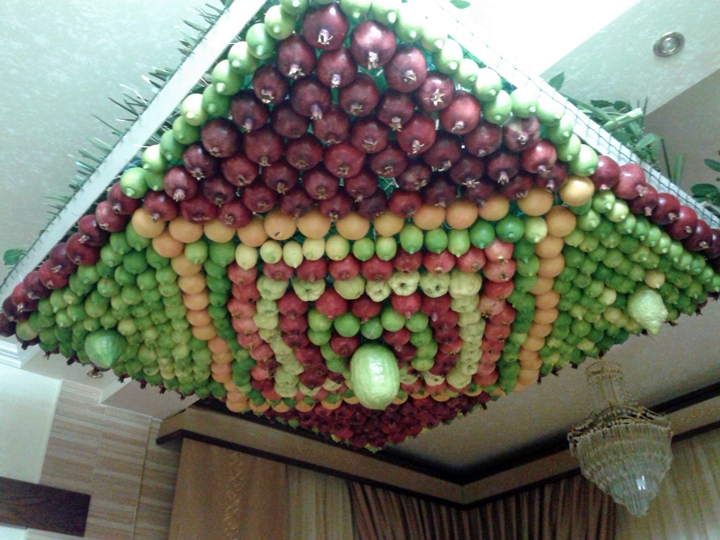 This year the Samaritans start the holiday a day earlier than the Jewish holiday. Also, they differ in their custom of decorating the Sukkoth booth, by covering its top with an array of fruit, observing the book of Leviticus law (23:40,42): “And ye shall take you on the first day the boughs of goodly trees, branches of palm trees, and the boughs of thick trees, and willows of the brook; and ye shall rejoice before the LORD your God seven days….Ye shall dwell in booths seven days; all that are Israelites born shall dwell in booths:”.

Sesame Tahini is an essential ingredient in many Middle Eastern dishes, and is considered healthy. When you come to Kiryat Luza, don’t forget to visit the Sesame factory, or stop in one of the groceries. The Sesame factory was the first industry of the Samaritans. It produces one of the best Tahini (Tehina) pastes in Israel, and also makes sesame-flavored Halva.

The Tahini bottle below is named “Har Bracha”, meaning the “mount of blessing” (Gerizim). It is produced with Millstones, which crush the hulled sesame seeds. 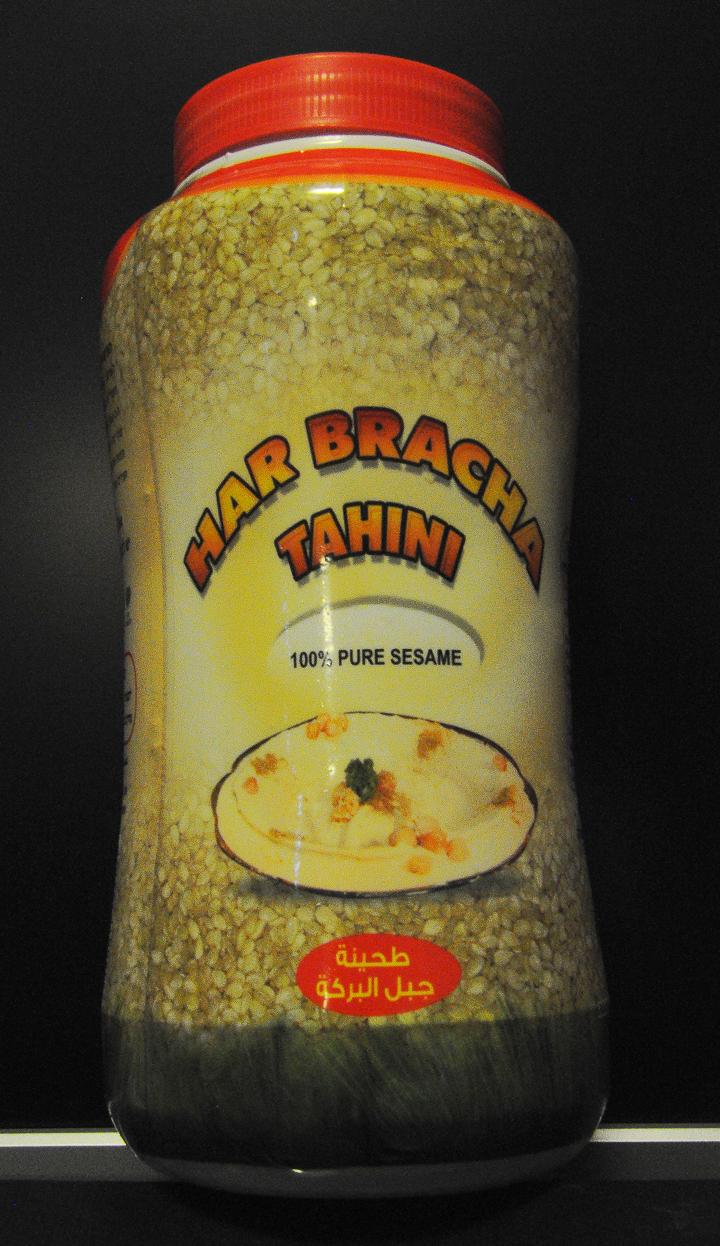 BibleWalks.com – following the paths of the Bible

This page was last updated on Apr 5, 2020 (Added Joseph lookout)