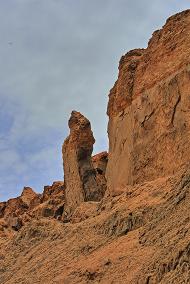 The mountains of Sodom are located on the south-west side of the Dead Sea, rising 150-250m above it. The mountains, 11KM long and 2KM maximum width, are made of salt mixed with other minerals. The water penetrates into the salt, creating large cavities.

This web page explores some of the caves of this salt mountain, which are associated with some of the Biblical stories – the destruction of Sodom and Gomorrah, the rescue of Lot, the turning of his wife to a salt pillar, and the cave where Lot hid with his daughters.

The mountains of Sodom (Sedom) are located on the south-west side of the Dead Sea, along road #90, as illustrated in the aerial map. They start  from the Dead Sea Works plant, and extend 11KM to the north up to  Zohar brook. 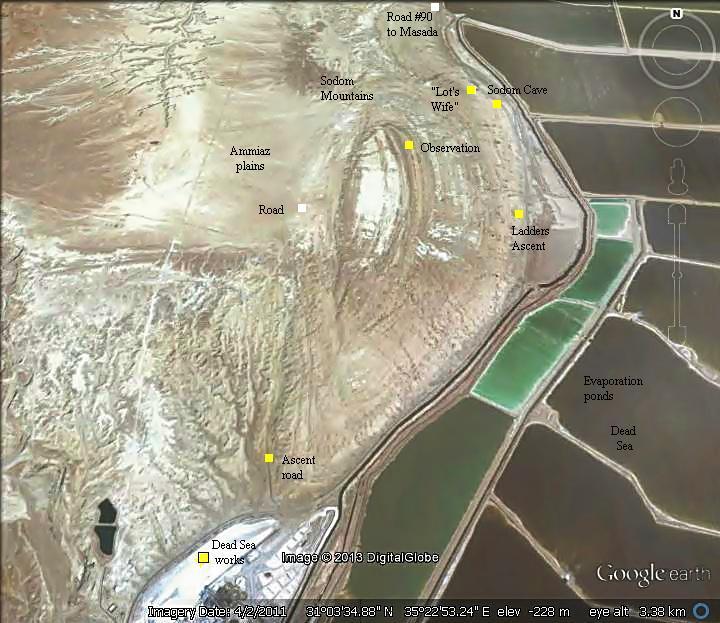 Over the years, the salt deposits reached to a large size, with a depth of 5-6 kilometers, 8-12 KM wide and 40KM long. Later, other kinds of heavier minerals and rocks accumulated over the layers of salt. Their pressure on the body of the salt caused the salt layers to push sideways.

The salt body slid 1-2KM towards the edges, rising above the “younger” rocks on the edge of the cliffs.

Chunks of Dead Sea salt, found on the floor of the sea

Mt Sodom is the result of this push west and upwards. Over the years some of the salt melted and washed away, mixing with the rock and creating many cavities and channels that poke the mountain.

Sodom is mentioned in the Bible in connection to the destruction of Sodom and Gomorrah  (Genesis 19 28): “And he looked toward Sodom and Gomorrah, and toward all the land of the plain, and beheld, and, lo, the smoke of the country went up as the smoke of a furnace”. The location of the ancient city is not known, yet in modern Israel the area of Sodom (Hebrew: Sedom) is located on the south-west side.

Lot, his wife and two daughters escaped just before the wicked city was destroyed. The angels told Lot to flee to the mountain, and never look back (Genesis 19 23-26):

“And when the morning arose, then the angels hastened Lot, saying, Arise, take thy wife, and thy two daughters, which are here; lest thou be consumed in the iniquity of the city. And while he lingered, the men laid hold upon his hand, and upon the hand of his wife, and upon the hand of his two daughters; the LORD being merciful unto him: and they brought him forth, and set him without the city. And it came to pass, when they had brought them forth abroad, that he said, Escape for thy life; look not behind thee, neither stay thou in all the plain; escape to the mountain, lest thou be consumed”. 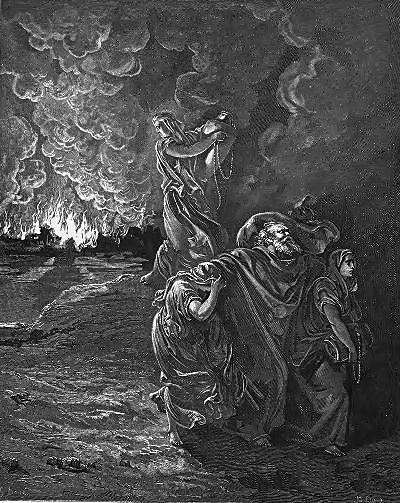 Lot’s wife is looking back to the fire, and turns into a pillar of salt

“The sun was risen upon the earth when Lot entered into Zoar. Then the LORD rained upon Sodom and upon Gomorrah brimstone and fire from the LORD out of heaven; And he overthrew those cities, and all the plain, and all the inhabitants of the cities, and that which grew upon the ground”.

Lot’s wife ignored the instructions, looked back, and consequently turned into a pillar of salt (Genesis 19 26):

“But his wife looked back from behind him, and she became a pillar of salt.”.

The cities and roads during the early periods are indicated on the Biblical Map below. 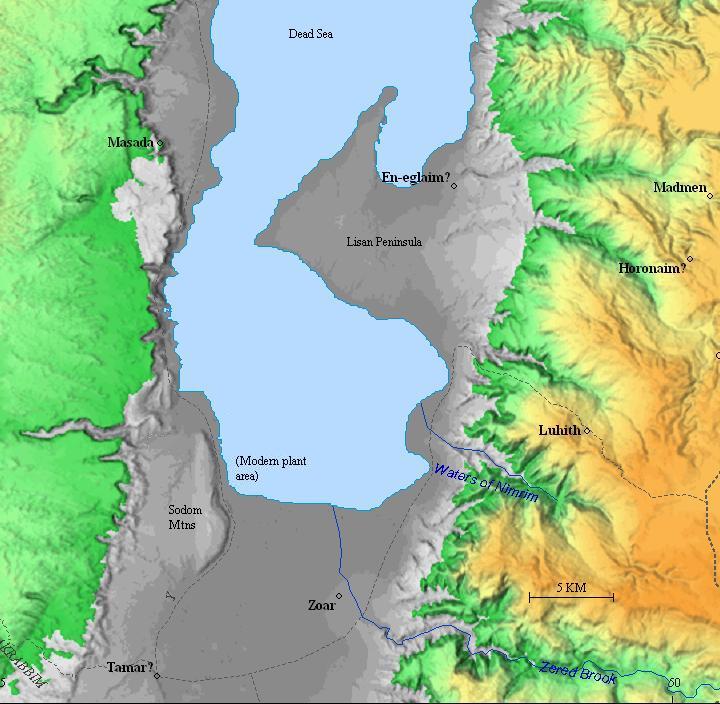 The city of Zoar is identified on the south-east side of the Dead Sea. This is where Lot avoided to enter during his flight after Sodom was destroyed (Genesis 19 30): “And Lot went up out of Zoar, and dwelt in the mountain, and his two daughters with him; for he feared to dwell in Zoar: and he dwelt in a cave, he and his two daughters”. It was probably located at the ruins of Tel Sheikh ‘Isa, near the village of Safi.

Zoar is also mentioned in the Bible in connection to the departing of Abraham and Lot (Genesis 13, 10): “And Lot lifted up his eyes, and beheld all the plain of Jordan, that it was well watered every where, before the LORD destroyed Sodom and Gomorrah, even as the garden of the LORD, like the land of Egypt, as thou comest unto Zoar“. Zoar, also called Bela, is mentioned again in the fight between the 4 kings of Aram-Naharaim and the 5 kings of the Dead Sea area, here named the “valley of Siddim” or the “Salt Sea” (Genesis 14 2-3): “That these made war with Bera king of Sodom, and with Birsha king of Gomorrah, Shinab king of Admah, and Shemeber king of Zeboiim, and the king of Bela, which is Zoar. All these were joined together in the vale of Siddim, which is the salt sea”.

Road #90 passes along the shores of the Dead Sea, just under the Mountains of Sodom. Along the road are several points of interest, and you can easily stop at the side of the road and visit them.

The shore of the Dead Sea is located on the east shore of the Mountains of Sodom. In recent years, following the industrial production of minerals by the Dead Sea Works plants, the water level has receded in the southern section, and it looks more like a collection of shallow pools rather than a “Sea”. 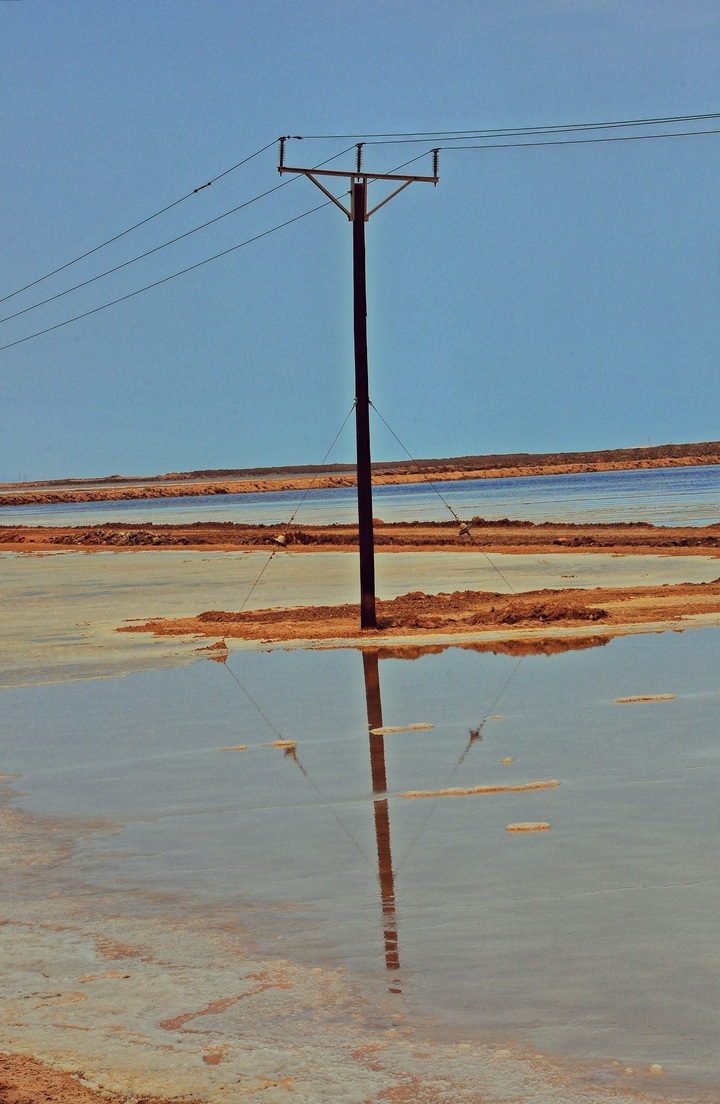 Lot and his family fled the doomed city of Sodom.  However, the curious wife ignored the instructions (“look not behind thee … lest thou be consumed”), and consequently became petrified (Genesis 19 26): “But his wife looked back from behind him, and she became a pillar of salt.”.

The following photo shows a pillar of salt, a vertical section which detached from the salt mountain. It is regarded as the “remains” of Lot’s wife. 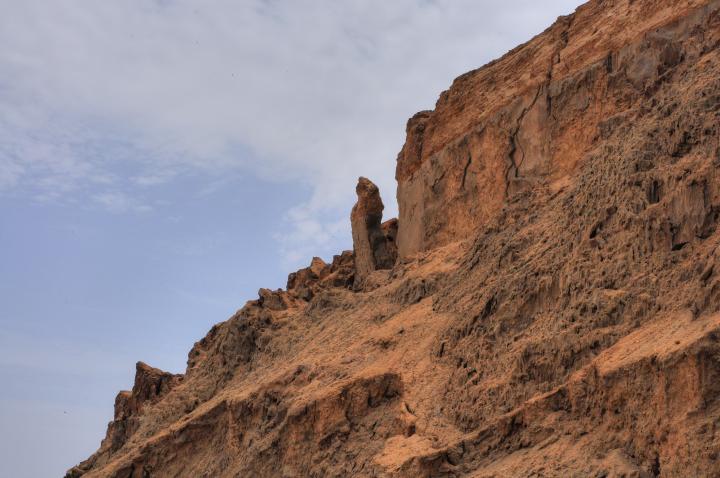 A closer view of the pillar of salt – “Lot’s wife”: 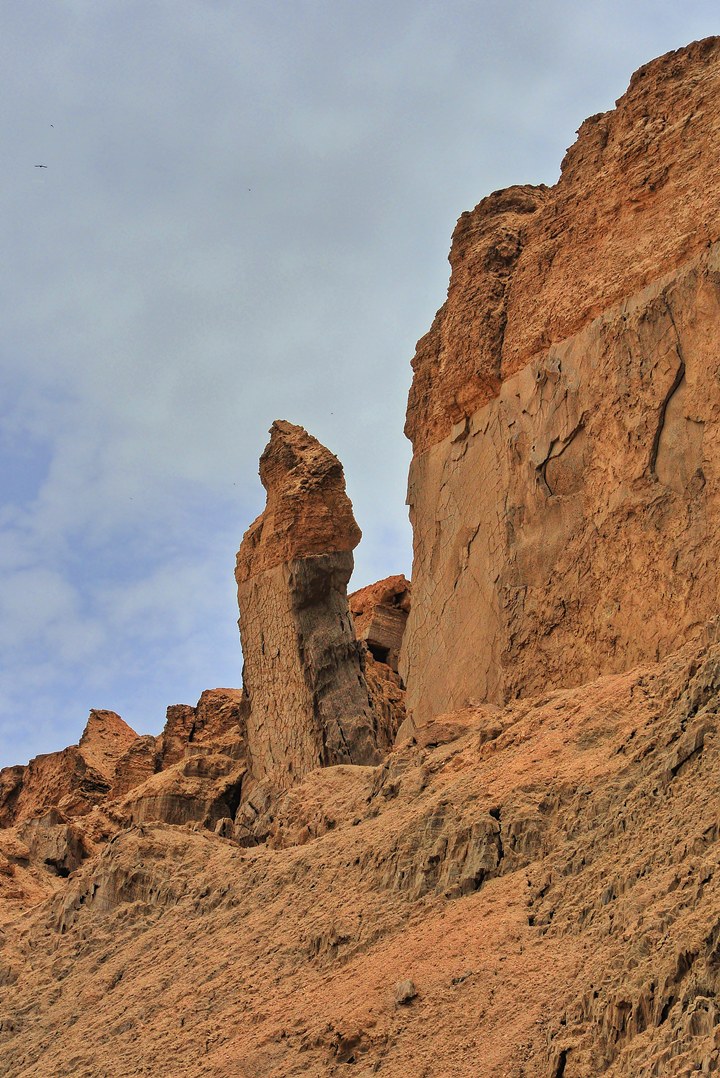 Under “Lot’s wife” section is one of the many caves of the salt mountain. This cave, or others around it, may have been the hiding place of Lot and his two daughters  (Genesis 19 30):

In the cave, both daughters became pregnant by their drunken father (Genesis 19 36): “Thus were both the daughters of Lot with child by their father”.

The entrance to the caves is forbidden by the authorities, since they can collapse. 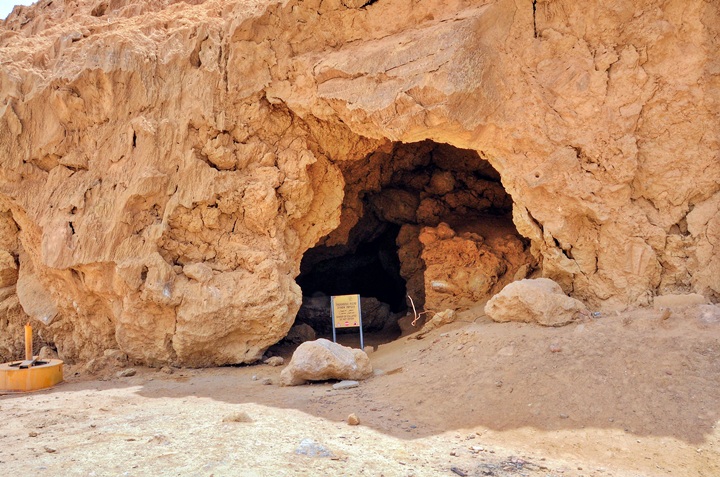 Inside the cave, are great forms created by the layers of the salt. 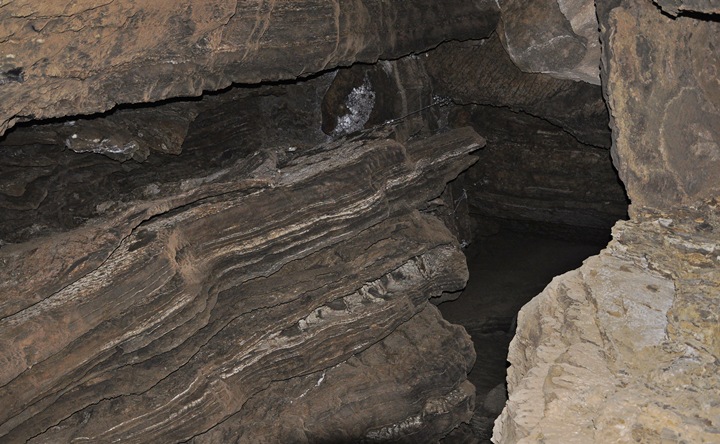 Most of the sections of the cave are pitch dark. 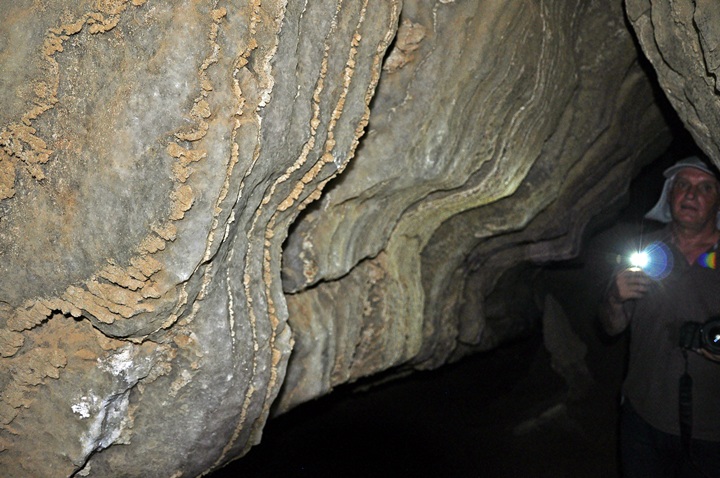 Another cave is located to the south of Lot’s wife. 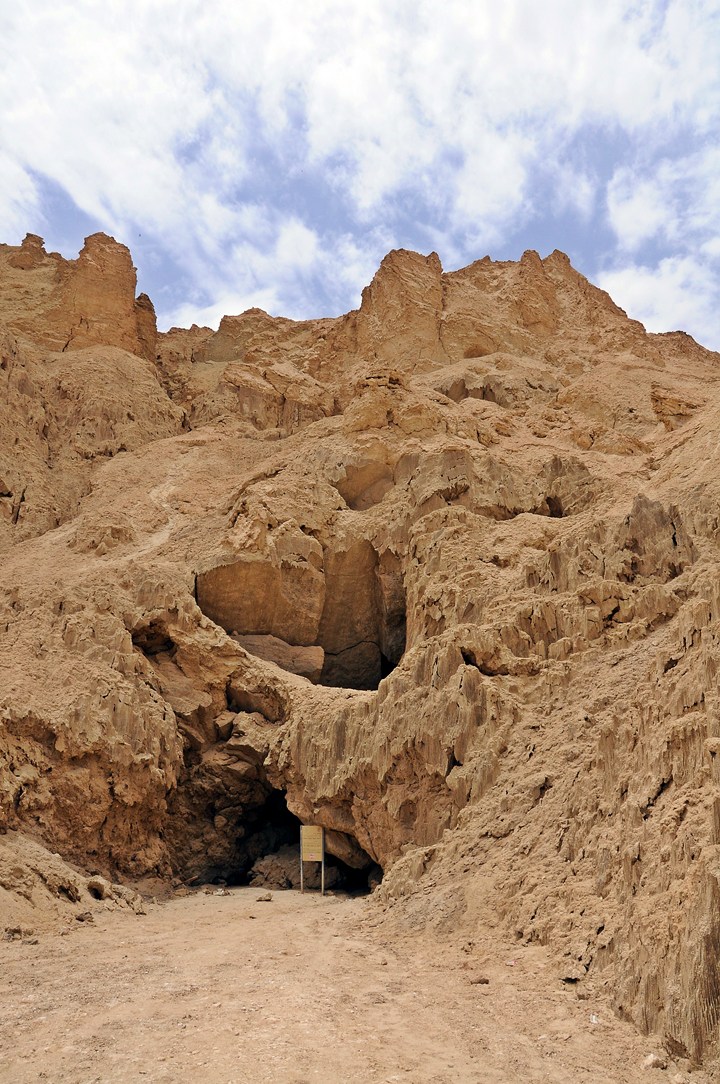 The entrance of the cave leads to a corridor that enters into the depth of the mountain. 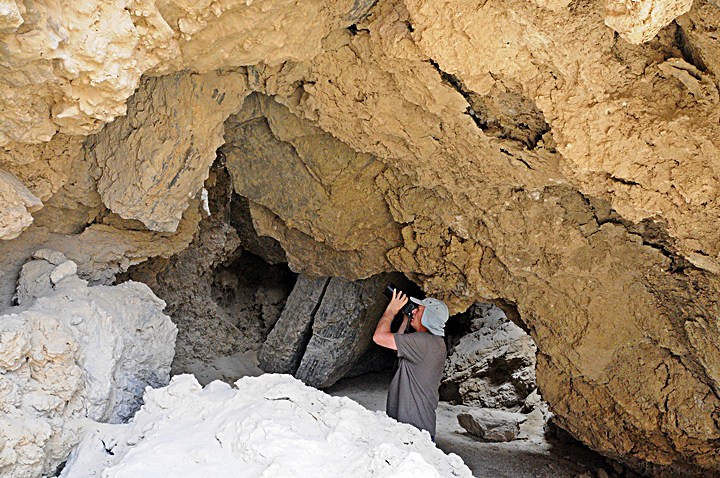 Inside the cave are remarkable salt rock formations. 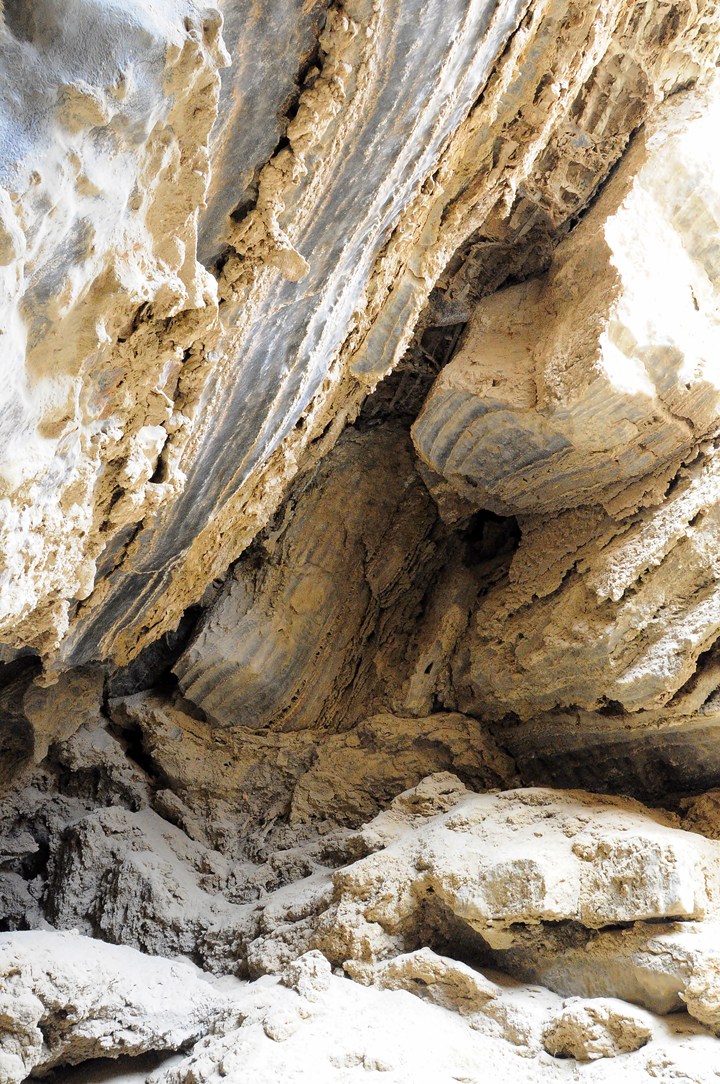 Inside the cave are tall chimneys, reaching high above the ground, and opening a window to the sky. These were created by the melting of the salt by the water, which drilled down into the mountain. Since the rain is scarce in this desert region, the salt was not washed away during the thousands of years it stood here above the Dead Sea. 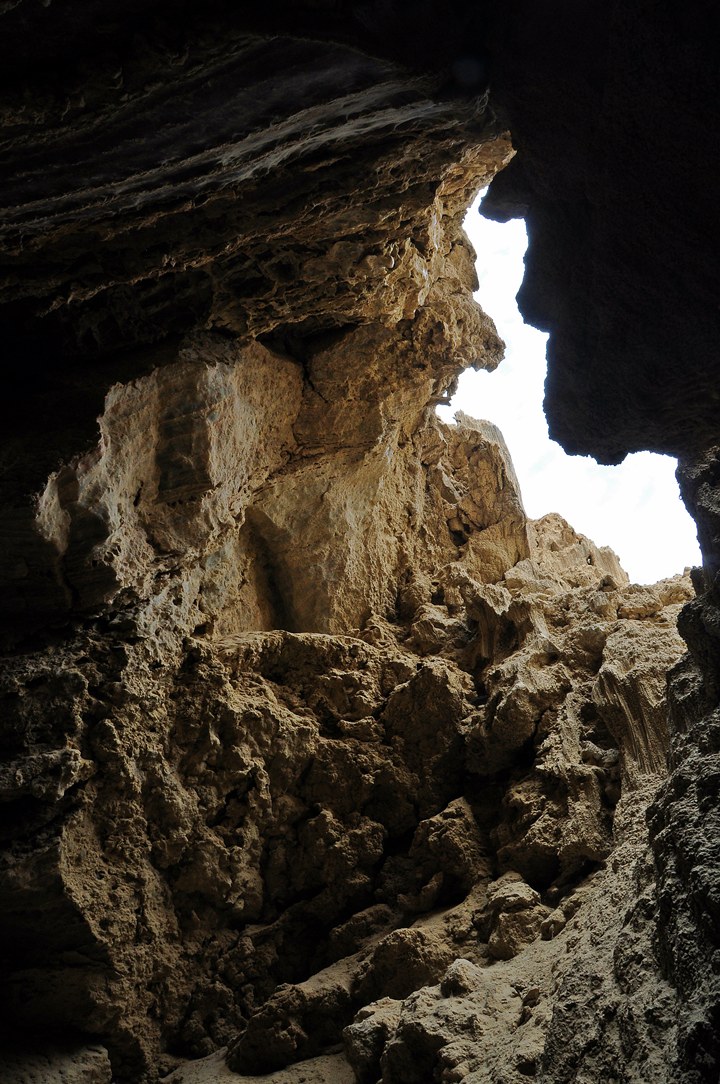 The upper section of the chimney is seen in the next photo: 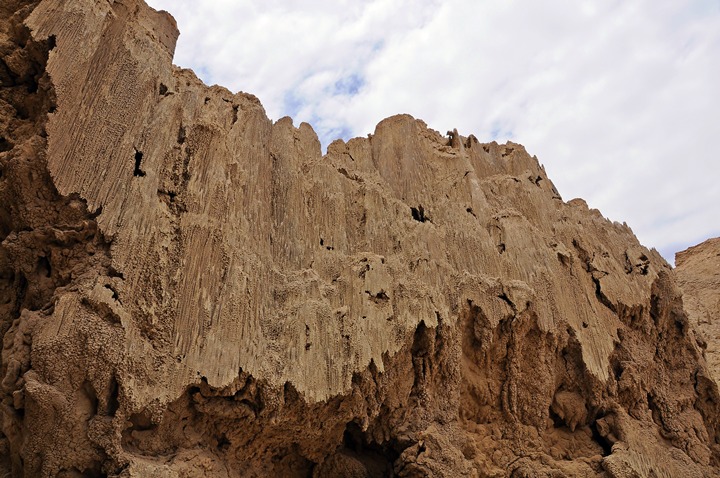 Another section of the cave: 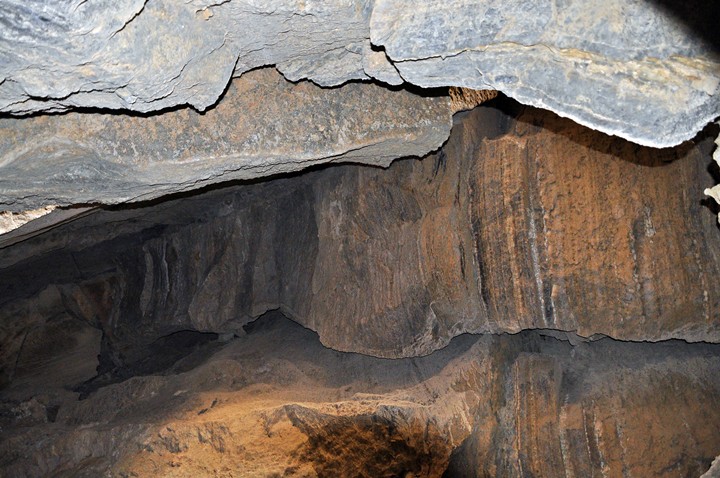