Ruins of a large Upper Galilee village, dated to the Byzantine and Mameluke/Crusader period. Its nickname - "the lost city" - is derived from its obscurity, as it was hidden inside the thick forest.

Ruins of a large village, dated to the Byzantine and Crusader/Mameluke periods. Its nickname - "the lost city" - is derived from its obscurity, as it was hidden inside the thick forest.

This aerial map indicates the major points of interest around the site.  Drive to a parking place near the site along a partially paved road, starting from Moshav Even-Menachem off highway #899.

Point on the yellow squares to navigate to the selected place in this page or other pages. 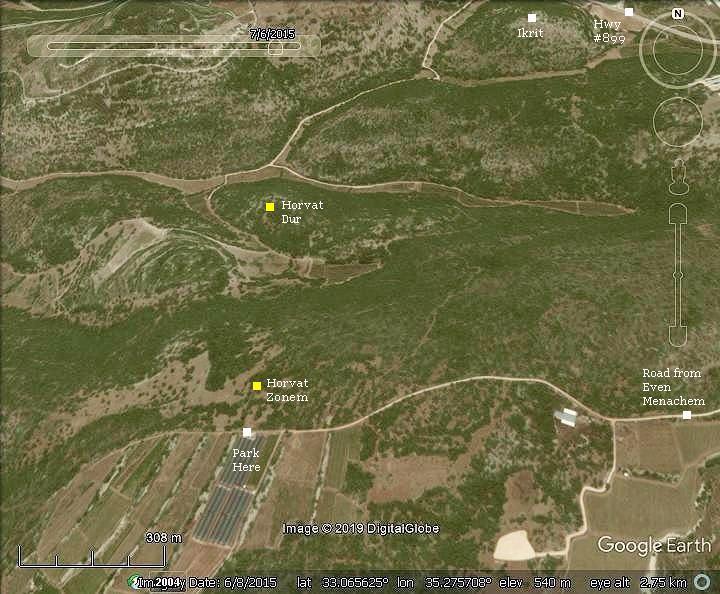 This Christian village was founded during the Byzantine period. Most of the structures were constructed during this period. It covers an area of 15 Dunams (4 acres).

The village was also inhabited during the Crusaders/Mameluke period, reusing the Byzantine structures.

This ruins of this impressive site is hidden in a thick forest. A short trail leads from the parking plate at the side of the dirt road.

The ruins are hidden among a thick forest, giving the site a nickname of 'hidden city'. 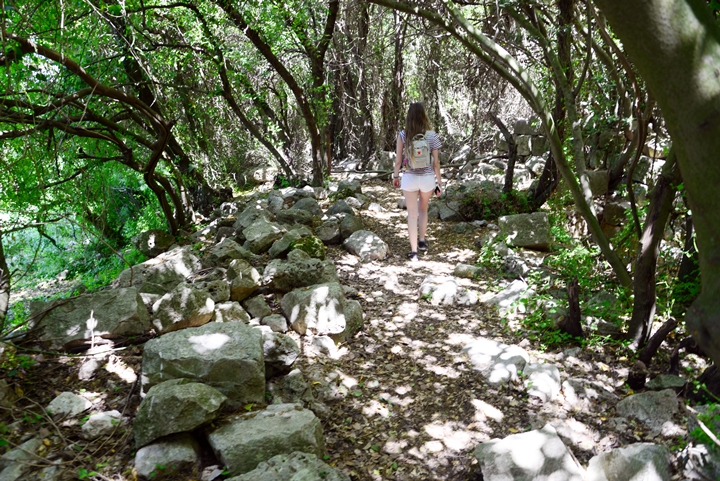 Along the trail, and beneath the ruined structures,  are cisterns built of well dressed medium-large stones. Amit is seen here peeking into one of the cisterns, which was full of water after a very wet winter. The cisterns were the primary source of drinking water during the antiquities, as there are no springs in the site. 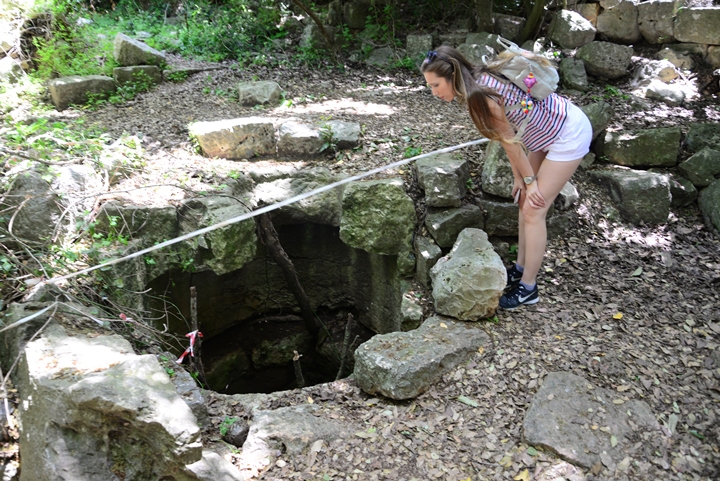 One of the remarkable structures in Horvat Zonem is a set of arches which supported the upper floor of a large building, perhaps a public structure. 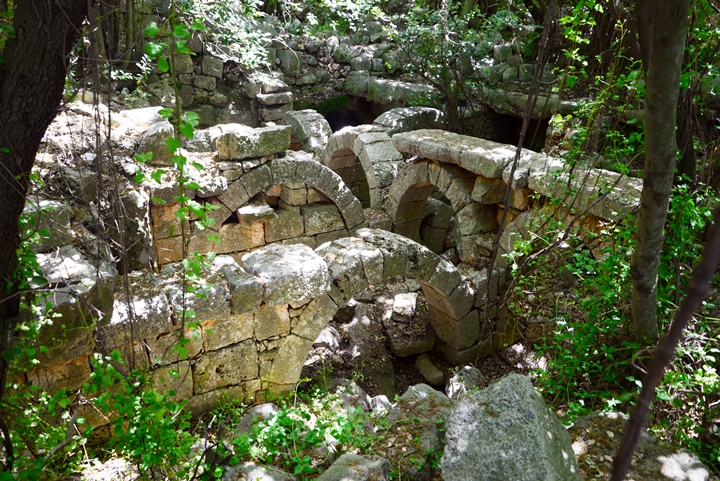 A view from another side shows the slabs of the upper level supported by the arches, creating a lower level. 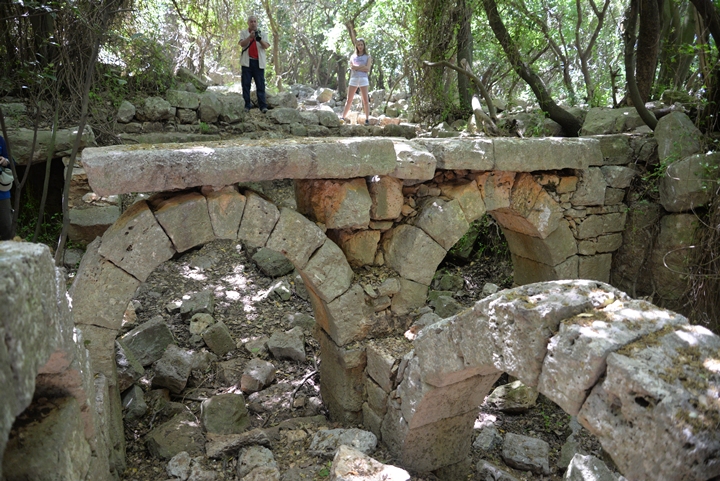 The lower level, below the arches, served as a large underground water reservoir.  The walls are plastered to keep the stored water.

A detail of the arches is in the next photo. Notice the plastered wall inside the chamber, and the quality of work on the base of the arch. 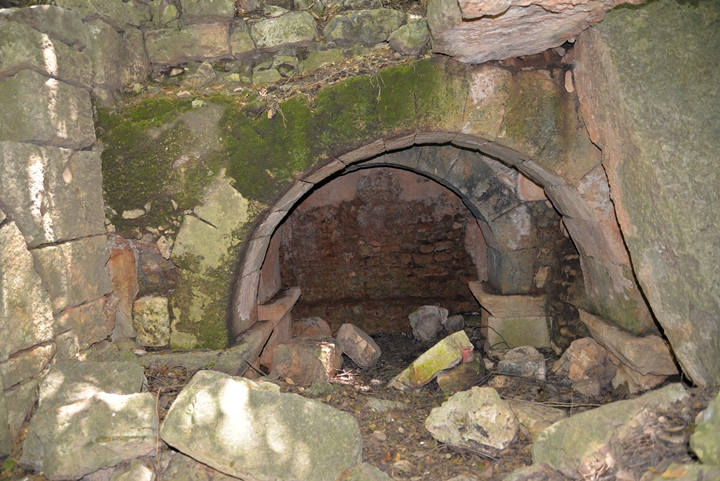 Horvat Zonem is one of the largest sites in the area, covered with dozens of ruined structures. Most of the buildings are covered by the bushes and trees.  Ruins of a Church (Byzantine period) and a Mosque (Mameluke period) were identified in the site, but we could not find them. 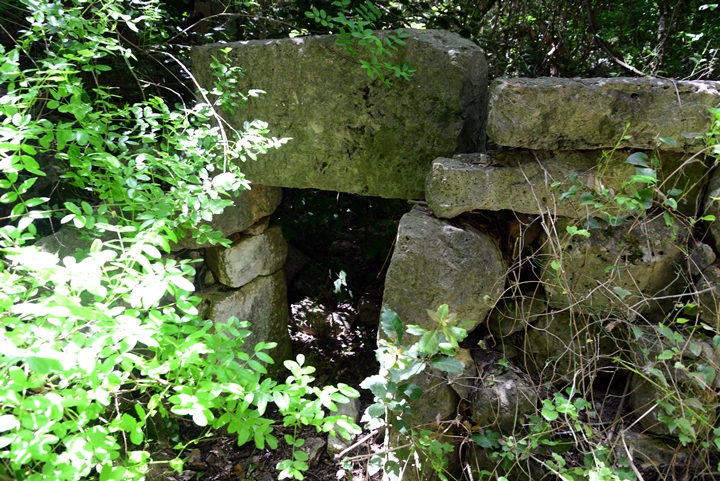 The base of a crushing stone, part of an olive oil press installation, is located on the northern foothills. 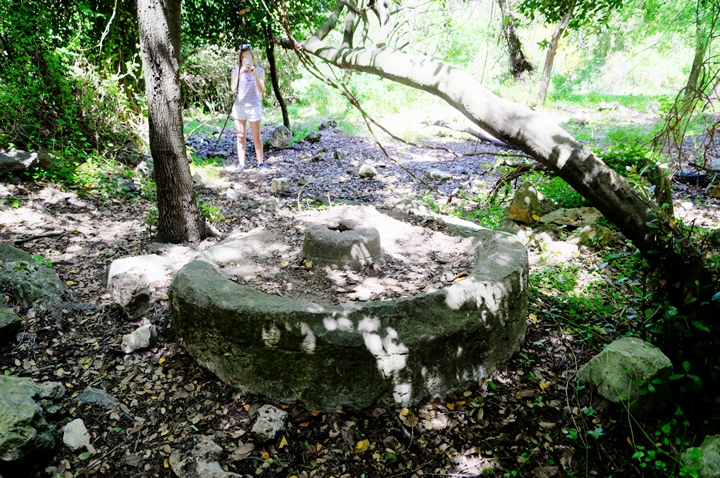 Of the ceramic fragments, we noticed this glazed ceramic sherd. The pottery dating to the Crusader/Mameluke periods consists of different types of glazed bowls and cooking ware. 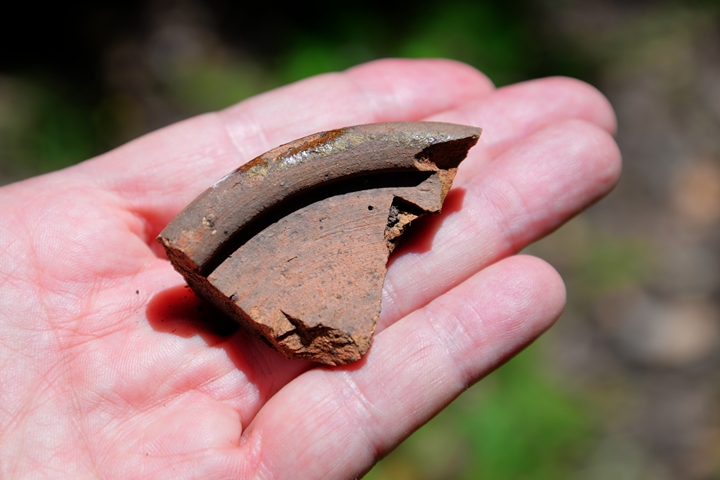 There are various wild flowers along the trail. During early May purple flowers were the majority of the flowers seen along the fringes of the forest. These annuals are identified as Campanula Sidoniensis  (Hebrew: Pa'amonit Zidonit). 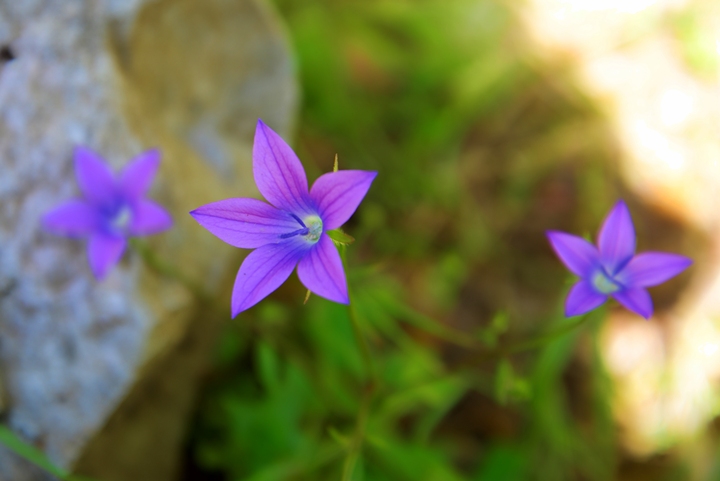