Ruins of an ancient Canaanite and Philistine city on the Besor brook, identified as Yurza.

In Tel Gamma, located on the bend of the Besor brook,  are ruins of an ancient Canaanite. This city is identified as Yurza, a city referred in the conquest of pharaoh Thutmose III (reigned 1479-1425 BC). The city was an important trading post on the caravan route from the Mediterranean to Arabia, and one of the Philistine cities during the Iron Age.

Tel Gamma (altitude 45m above sea level) is located to the south of the connection of two major brooks - the Besor  (Wady Aza) and the Gerar (Wady es Sheriah). The Besor continues to flow to the Mediterranean sea, its outlet is located 10KM southwest of Gaza.

The site is located on the side of the road #232 from Kibbutz Re'im to Kibbutz Magen. 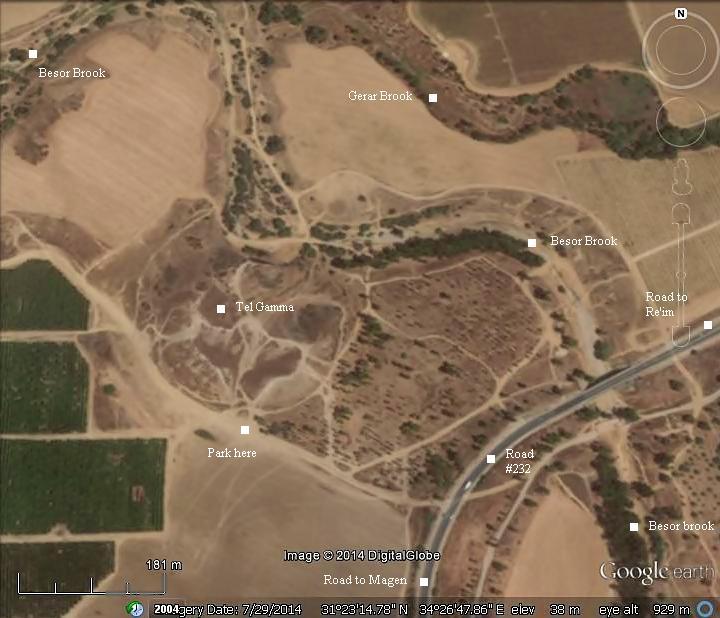 Egyptian records show that Egypt conquered  Canaan during the 24th Century BC, following the intrusion of pharaoh Pepi I Myre (reigned 2332-2283 BC). The Egyptian reached the valley of Jezreel and controlled Canaan cities since then. The Egyptian reach extended to Phoenicia during the 20th and 19th Century.  During this time the site was resestablished.

During the 15th Century the Canaanite Kings managed to group a coalition to free their cities from the Egyptian control. Pharaoh Thutmose III  (reigned 1479-1425 BC), the greatest  Egyptian conqueror, responded in an intrusion to Canaan. The climax of this conquest was the famous battle near Megiddo (1468 BC), which resulted in the Egyptian conquest of Canaan for the next 350 years.

Thutmose III inscribed in his palace at Karnak a list of 119 cities that were conquered during this conquest. One of the cities was Yurza. The inscription reads: "From the city of Yurza to the edges of the world"). This city, Yurza, is identified by scholars as the Canaanite city at Tel Gamma.

The Biblical map below shows the location of the site and the major cities during the ancient times. The city, marked with a red square, is located on the banks of the Besor brook, lying on a central crossroad. 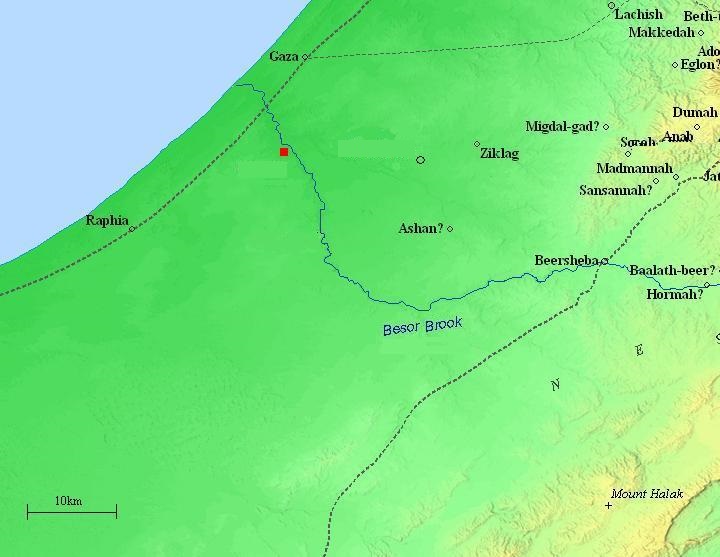 South west of Israel  - during the Biblical  periods  (based on Bible Mapper 3.0)

The Besor brook was a natural barrier, which enhanced the defense of the city. The Bible records that King David encountered a difficulty to cross it while pursuing the Amalekites invaders to the Negev (1 Samuel 30:10): "But David pursued, he and four hundred men: for two hundred abode behind, which were so faint that they could not go over the brook Besor.".

During the 12th C the Philistines arrived to the cities along the shore.  Tel Gamma became one of their cities. The area witnessed a surge in the settlement activity. The excavations unearthed an arched structure dated to this early period, with Philistine structures and ceramics.  A large kiln for producing local ceramics was also found, dated to the 12th Century, although not clear if it was Philistine.

The autonomous Philistine rule continued in the 10th to the mid 8th Century BC.  A four-room house dated to this period were found in the excavations.  During the Iron Age the city covered an area of 40 Dunam (4 Hectares) with an estimated population of 800 inhabitants. In the 10th Century BC there were 15 rural settlements along the Besor basin near Tel Gamma, increasing the local  commerce  ("Arch. of Israel and the Levant", p. 152, A. Shavit).

The Assyrian empire conquered the North Kingdom of Israel in 732BC, destroying most of the cities and villages in the land. The Assyrian King Tiglath-Pileser III annexed the area (as per 2 Kings 15: 29):     "In the days of Pekah king of Israel came Tiglathpileser king of Assyria, and took ... and carried them captive to Assyria").   The Assyrians developed the Gaza coastal plain, making the Philistine cities - from Jaffa to Raphia - a kingdom subdued and raising taxes to the Assyrians.  An Assyrian administration center was establish in Tel Gamma, and the city became an  being an important trading post on the main caravan route between the sea and Arabia. The excavations indeed revealed a large structure, perhaps the governor's palace.

The Babylonian empire rose after the fall of the Assyrians (610BC), defeated the Egyptians (609BC) and conquered the land until the Nile  (2 Kings 24 7): "... for the king of Babylon had taken from the river of Egypt unto the river Euphrates all that pertained to the king of Egypt".  The Philistines presence ended after their cities were conquered by the Babylonians in 604 BC.   The residents of the Philistine cities were relocated to Mesopotamia. This ended the 600 years of the Philistine presence in Israel.

The Persian empire replaced the Babylonians in 538 BC. During the Persian period, the former cities of the Philistines were resettled by the Phoenicians. From this period, the archaeologists unearthed a large structure, perhaps a fortress. This was the last major phase of occupation on the mound.

Alexander the great defeated the Persians and the Hellenistic period brought major changes to the cities of the Levant. Most of the ancient Tells ceased to function and new cities were established.  On Tel Gamma the excavations found Silos made of mud bricks which are dated to the Hellenistic period.

The site was abandoned, and a new settlement was established south of the deserted mound. Remains of this new site were found in salvage excavations east and south of Tel Gamma.

A major battle was fought near Tel Gamma on October 28 1516, between the Turkish Ottomans, and the Egypt-based Mamelukes. This battle, known as the "battle of Khan Yaunis" (the nearby city in the Gaza strip), was an important milestone in the history of the land. The Mameluke cavalry (led by Janbirdi al-Ghazali)  attempted to attack the Ottoman forces (led by Hadım Sinan Pasha) who camped here, in order to block their advance southwards. However, the Ottomans broke the cavalry charge. The Mamelukes, who ruled the Levant since 1215, were defeated and retreated to Egypt, while the Turks continued to advance through the Sinai. After another battle of Ridaniya near Cairo, the Ottomans took control of the Levant, starting the Ottoman period which lasted 400 years.

On the foothills of Tel Gamma are signs commemorating the mounted infantry maneuver of the Australian and New Zealand Army Corps (Anzac) forces on Oct 31, 1917, during the World War 1.

Their bold mission was to surprise the Turkish forces in Beersheba in order to break the 8 months long deadlock of the British Army's siege on Gaza.  General Allenby, who was appointed just before this operation after the two failed attacks on Gaza, ordered a surprise charge as the first phase of his 5-steps plan to break the stalemate, capture Beersheba, and finally reach and conquer Damascus.

Horses being watered at Tel-el-Jemmi after the second operation at Gaza. Courtesy of Australian War Memorial

A memorial trail passes along the historic route of the Anzac forces. Its third station is located on the south side of Tell el-Jemmeh (Tel Gamma). 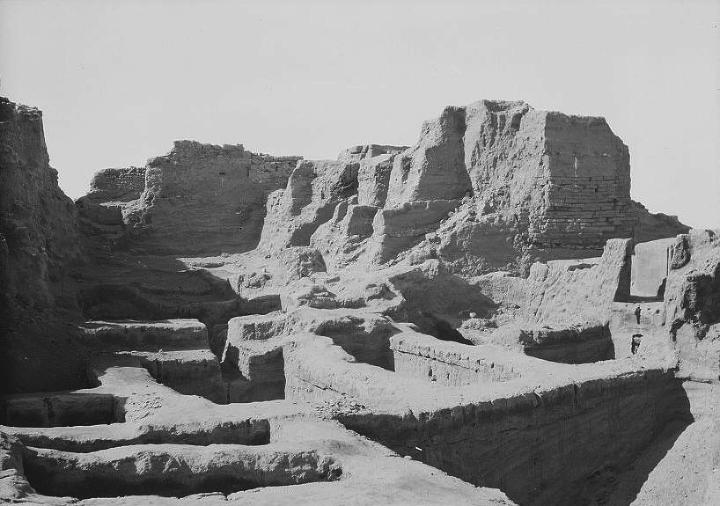 The site is open to the public. You can climb up the steep mound, but be extremely careful not to get close to the edge of the summit.

The following aerial view was captured by a quadcopter drone in December 2014.  This view, from the south side, shows the artificially raised mound, hallowed in its center, situated along the bank of the Besor river, which is seen here behind it. 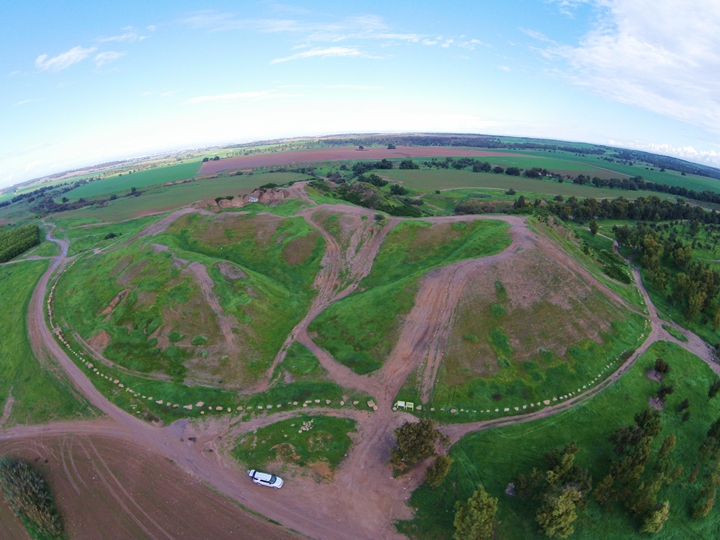 This photo was captured in December, minutes after a heavy rain passed through the area. The hill is now covered with a low grass  with blankets of wild flowers, but most of the year it is barren and brown. The average rainfall in the western Negev area is 250mm (9/8"). 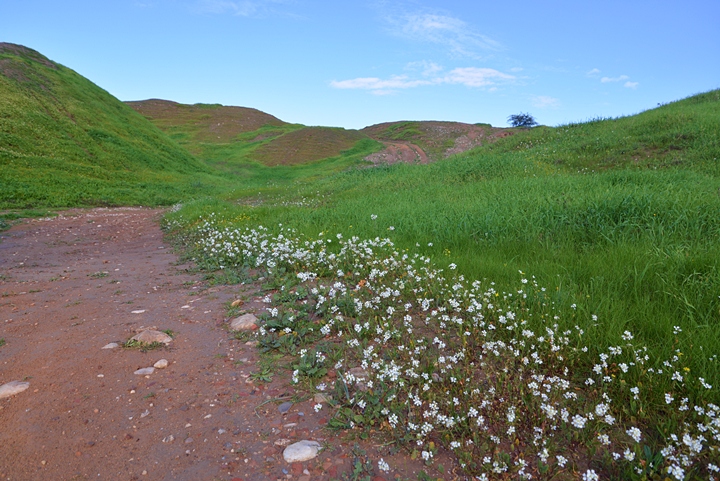 An easy access up the mound is on the south side. The artificial mound, 50 Dunam (5 hectares) in area, is about 9m (30ft) above the area around it. 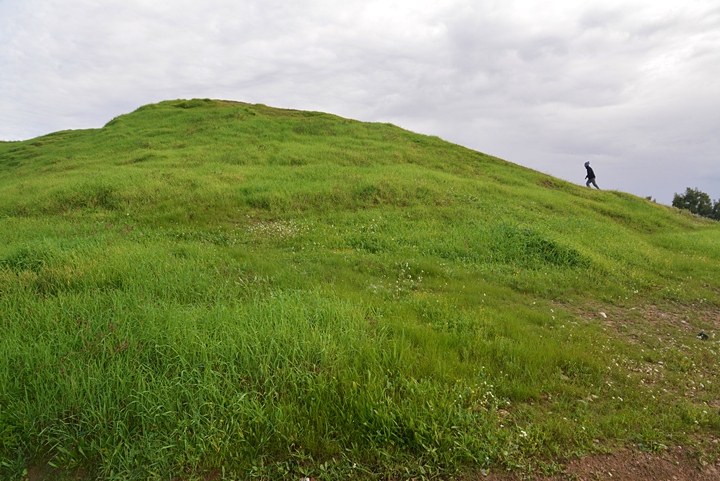 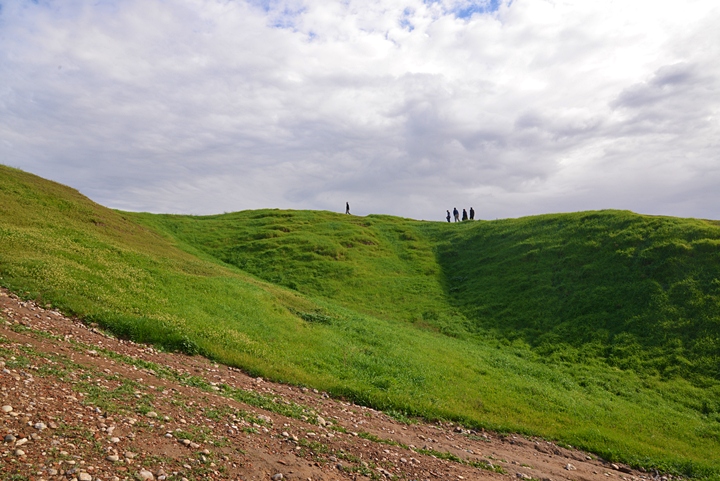 The following photo is a view towards the south.  You can park the car on this edge and climb up to the summit. 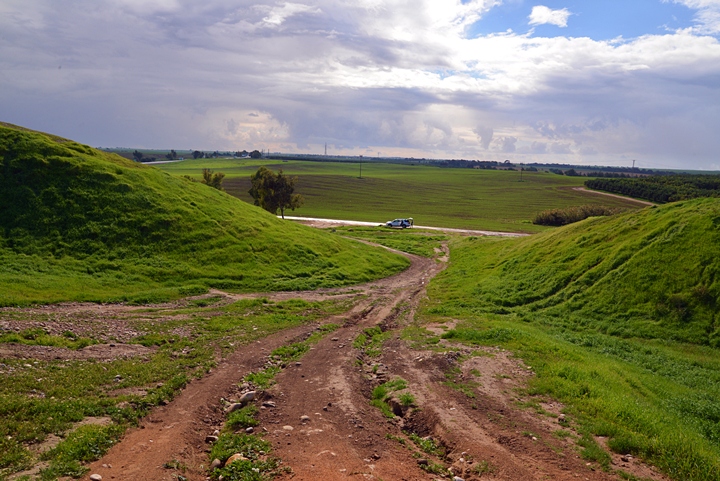 The mound is covered by thousands of Bronze and Iron age ceramic segments, as seen along the ascent path. 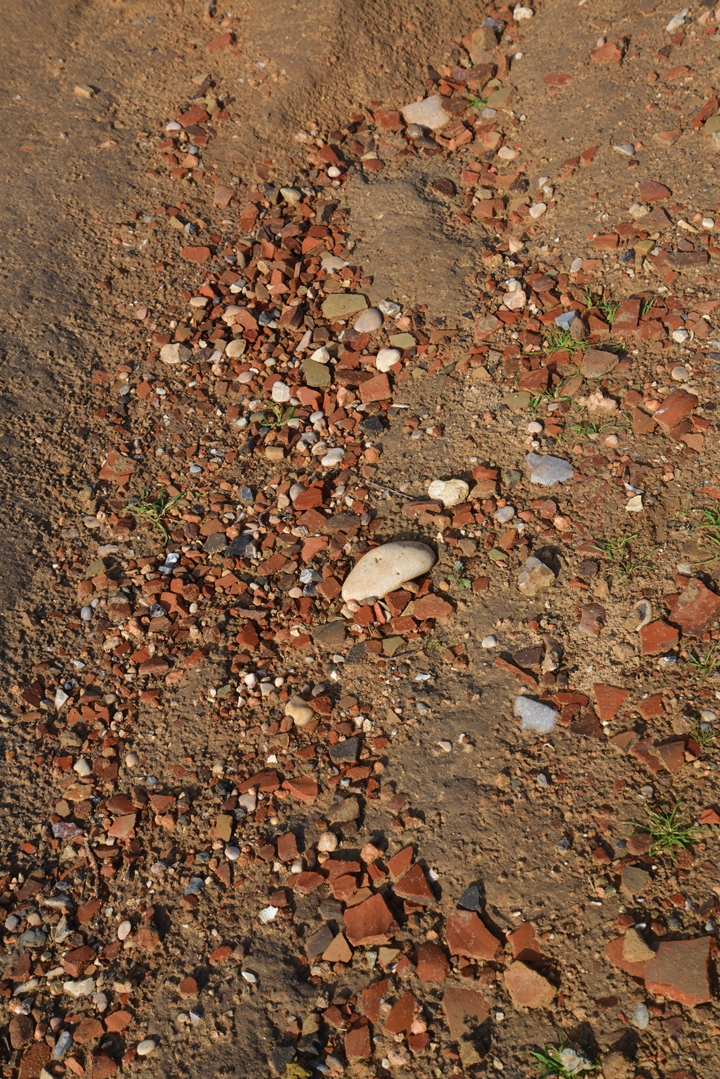 The northern side of the summit is shown here, with an eastern view of the basin of the Besor brook. Kibbutz Re'im is seen in the far background. 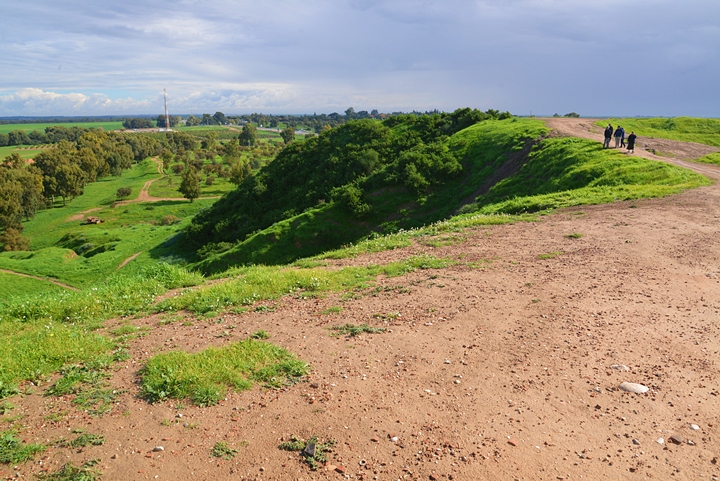 In this northwest section of the mound is a deep cavity, for some of the ancient structures caved in. Be careful not to approach the edges of the hill, as the northern precipice is dangerous! 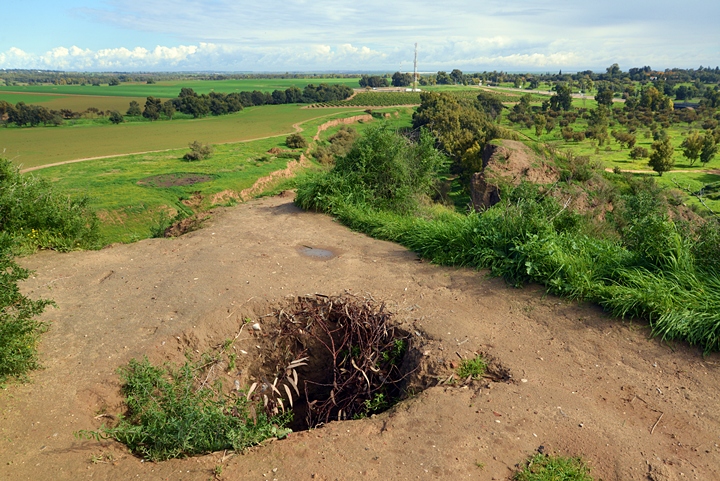 On the west side of the summit are remains of the Petrie excavation of the British school of Archaeology, which were conducted during six months on the years 1926-1927. 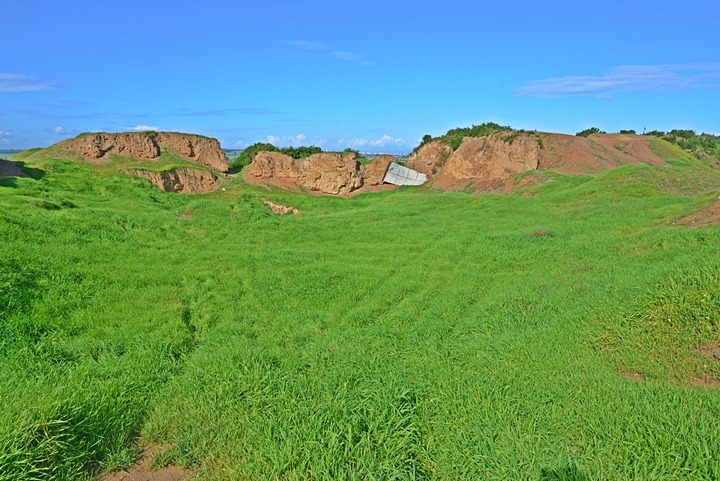 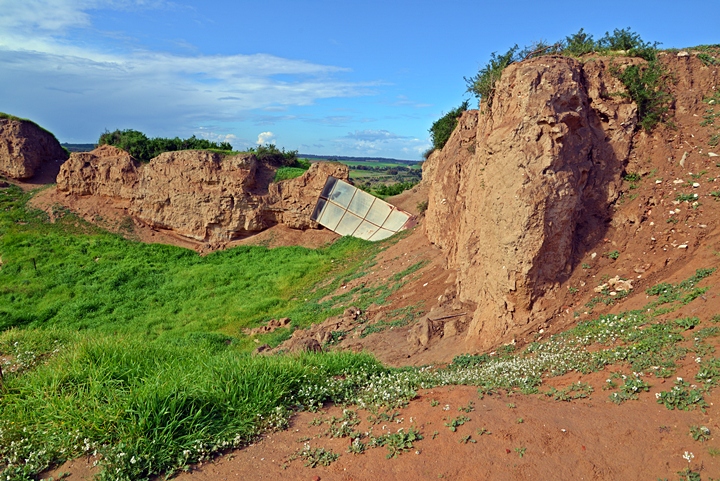 The Besor stream basin is located on the north side of Tel Gamma, almost cutting into the hill. 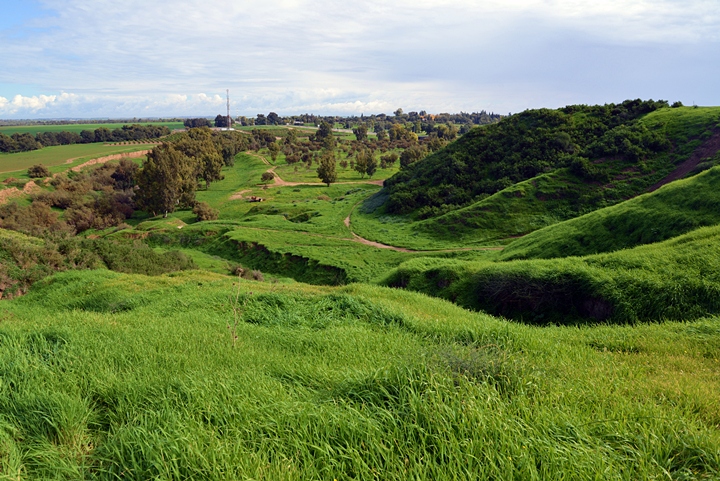 The Besor loops around the mound, and is also seen on the western side of the hill. In the background are the houses of the Gaza strip, located 8km to the west. 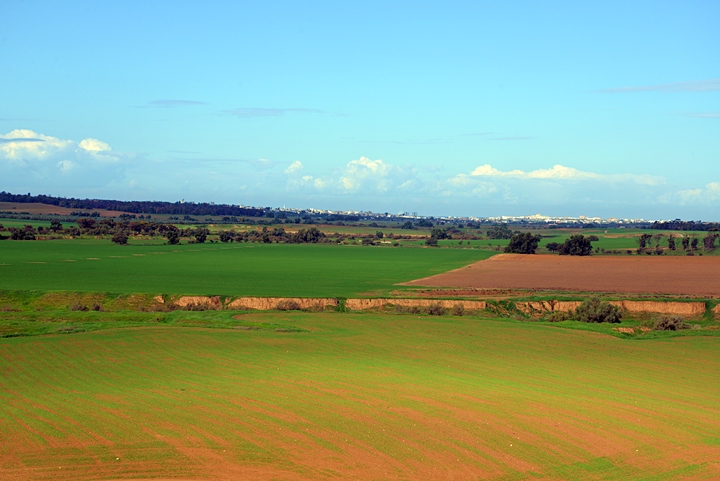 A 360 degrees panoramic view, as seen from the north west side of the summit,  is shown in the following picture. If you press on it, a panoramic viewer will pop up. Using this flash-based panoramic viewer,  you can move around and zoom in and out, and view the site in full screen mode.  Hot spots indicate the major points of interest.

BibleWalks.com - Exploring the ancient jewels of the Negev