Remains of a Crusader fortified farmhouse, in the center of et-Taiyibe in the Jezreel valley.

Remains of a Crusader fortified farmhouse ("Le Forbelet"). The foundations of its tower, walls and farm houses are located in the center of a Muslim village (et-Taiyibe, meaning: "the goodly") in the Jezreel valley, near the stream of Nahal Issachar.

The village of et-Taiyibe is located in the Jezreel valley, west and north of  Nahal Issachar stream. A single road (#717) leads 2km south to the entrance of the cooperative village of Moledet (Bnei Brit), and from there to the main highway (#716 - Ein Herod to Endor). The antiquities are mostly buried  under the modern houses and in the ruins of Khirbet Haddad east of the stream. In the center of the village, adjacent to the mosque, are the remains of the fortress and a some structures. 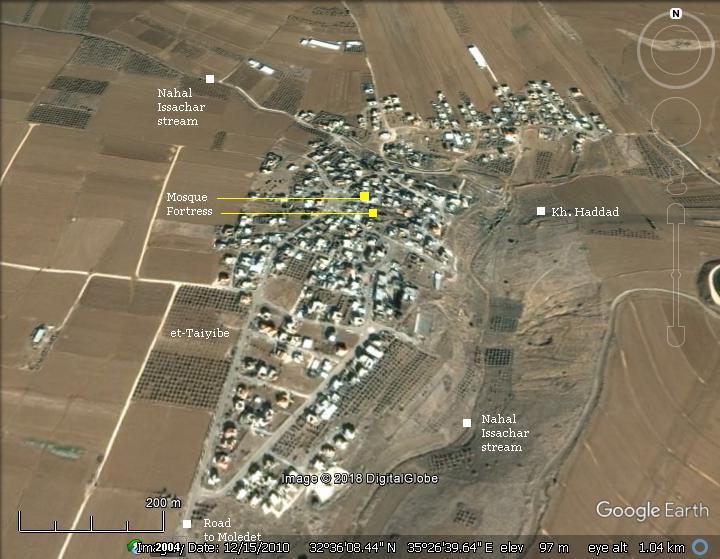 After the conquest of Canaan by the Israelites, the area was within the inheritance of the tribe of Issachar.

The site was also identified by some scholars as Ophrah - the city of the judge Gideon. (Judges 6:11: "And there came an angel of the LORD, and sat under an oak which was in Ophrah, that pertained unto Joash the Abiezrite: and his son Gideon threshed wheat by the winepress, to hide it from the Midianites".

Some of its remains are located east of the village in the ruin named Horbat Haddad. The name Ophrah was translated to the Arabic name Taibe, meaning: "good".

The cities and villages (circles) and roads (dashed lines) during the Canaanite to Roman periods are indicated on the Biblical Map below. The site is indicated in its center as a red dot. Although it is not situated along a major road, there was a route that passed nearby, connecting the ancient highway south of Mt. Tabor, via Endor, to Beth Shean. 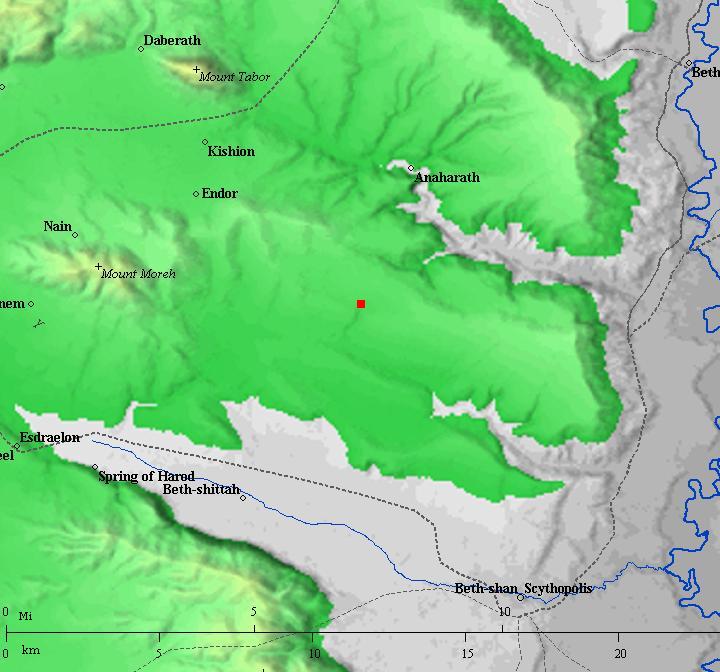 Map of the area around the site (marked by a red circle) - during the Canaanite to Roman periods  (based on Bible Mapper 3.0)

Potsherds dating to the Hellenistic period were found in the vicinity of Horbat Haddad, east of the modern village.

The town grew in the Roman and Byzantine period and covered a large area - now occupied by the modern village. On the north east side of the village was the graveyard of the Roman city, as several sarcophagi (stone coffins) were found in archaeological surveys.  According to the finding of a decorated bronze incense shovel, it was a Jewish town.

Excavations on the east and north side of the modern village, and surveys conducted around the village, revealed architectural remains and other findings (pottery, glass, metallic) dating to the Roman and Byzantine periods. Two pools were exposed along Nahal Issachar that were filled by an aqueduct, and were dated to the Byzantine period.

The Crusader fortified farmhouse (named "Le Forbelet") is located only 7KM west of the Belvoir Crusader fortress. It defended the Crusaders passage to their strongholds in Mt Tabor, Beit Shean and Afula. The fortress was occupied by the knights of the Hospitallers order.  This quasi-military structure was probably constructed in 1168, on Roman foundations. This was the same year the main fortress of Belvoir was constructed, in order to fortify the north eastern front of the Crusader Kingdom.

The tide against the Crusaders turned after 5 years when Saladin's forces defeated the Crusaders in the decisive battle of Hittim (July 4, 1187). Following this victory, the Galilee remained without a regional force that could repel the Ayyubid forces, and the fortified Crusader cities - Acre, Tiberias and Haifa - were captured. The Belvoir fortress was on siege for a year and a half.  But on January 5, 1189, the Muslim fighters managed to knock down the eastern tower and walls of Belovoir, resulting in the surrender of the defending Knights.

These defeats led to the 3rd Crusade (1189-1192), headed by Richard the lionheart (Richard I King of England), in an attempt to re-conquer the Holy Land from Saladin.  The Crusaders managed to reclaim most of the lost land, but failed to recapture Jerusalem.

After 100 more years of turmoil, the Crusaders kingdom of Jerusalem finally fell in 1291.

The Mamlukes were Turkish prisoners who were sold to the Sultan of Egypt, trained by him and served as his palace guards. In 1250 they seized the control of Egypt.   The Mamlukes  controlled the Holy Land for the next 250 years.

The fortress was used by the Mamlukes (renamed ‘Afrabala) and the town grew around it.   Excavations on the east and north side of the modern village exposed revealed architectural remains dating to this period.

This place is perhaps the Tubi of the Lists of Thothmes III., mentioned next to Sarana (Sarona, .Sheet VI), the name being identical.

Taiyibeh - This village, poor and miserable, is now nothing but a wretched relic of an important city, situated on the slope of a hill whose summit was surrounded by a fortress. This was formerly constructed of very fine basaltic blocks, cut and dressed with care ; a ditch cut in the rock and now three-fourths filled up surrounded it, at least on the south and west. There remain

of this stronghold several thick parts of the wall, and within vaulted magazines which now serve the fellahin for refuge : rude dwelling-houses have also been built within the enclosure.

One of these houses, more considerable than the others, and partly constructed of good

basaltic stones taken from the ruins of the fort, occupies the top of the acropolis, which I regard as ancient, although allowing that it may have received attention from the Mohammedans or the Crusaders. As for the city, which extended to the north and east of the castle, it now, with the exception of a few courses still upright, presents nothing but a heap of ruins. (Gurin, 'Samaria,' i. 126.) 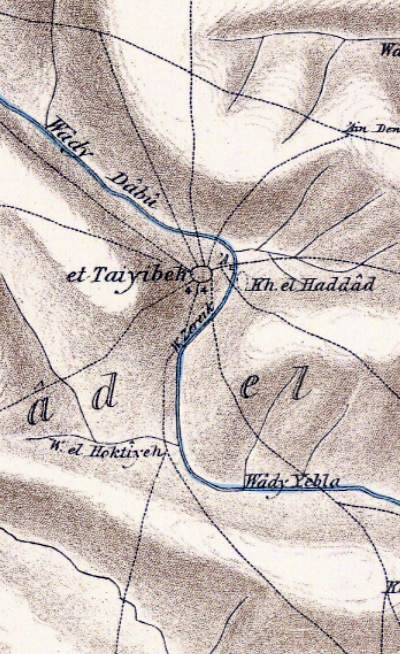 Part of Map sheet 9 of Survey of Western Palestine, by Conder and Kitchener, 1872-1877. (Published 1880, reprinted by LifeintheHolyLand.com)

During the Ottoman period (~1873), Bedouins of the Zoabi clan were invited by the Ottomans to immigrate from Irbid, Jordan, to the plains of Isschar.  Their original came from Iraq. The Zoabis populated a dozen or so villages around the area of Mt. Givat Moreh, and their leadership is in Nazareth.

The tour of the site was with Uncle Ronnie, who lives nearby and has many friends and co-workers in the village. 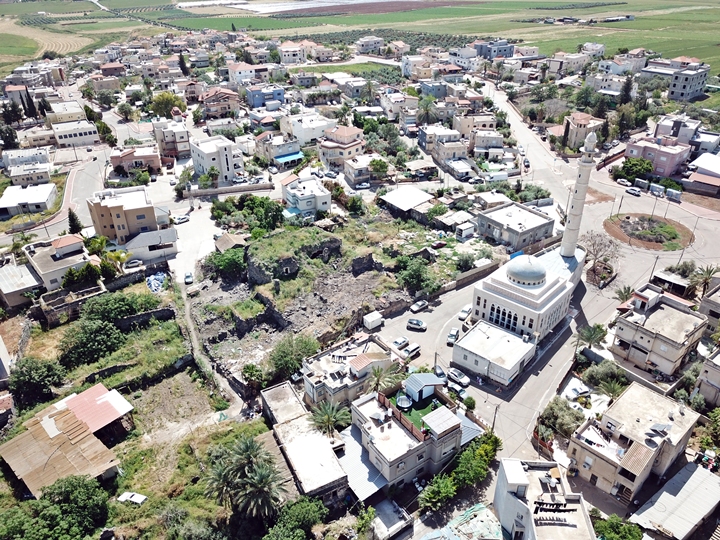 A closer aerial view of the fortress is seen next, captured from the east side. 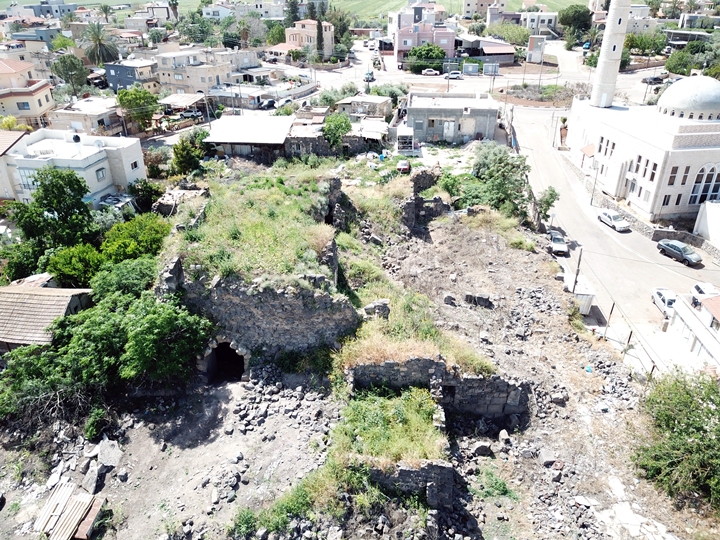 The following photo is a vertical view of the fortress. 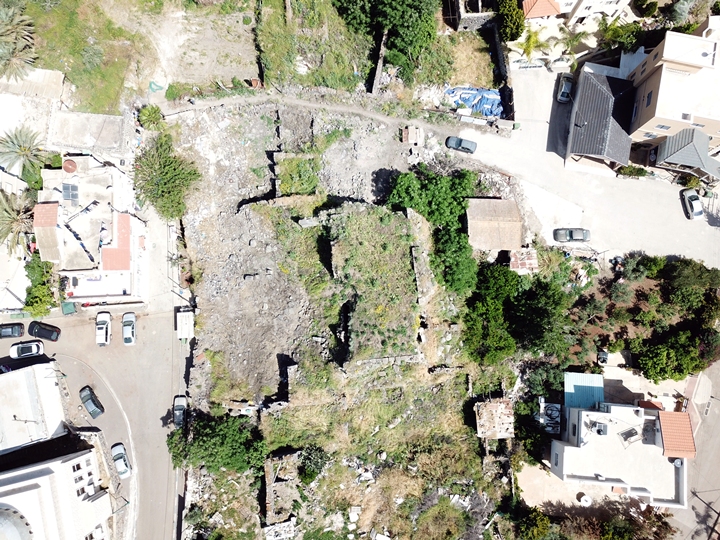 This YouTube video shows a flight over the site:

(b) Center of village, Mosque

In the center of the village is the mosque. The minaret (call-for-prayers) tall tower and the structure of the mosque is viewed here from the west side.

In 2008 the villagers painted the dome of the mosque in blue and white colors - Israel's national colors. This was an unusual gesture of solidarity for the country's 60th birthday. 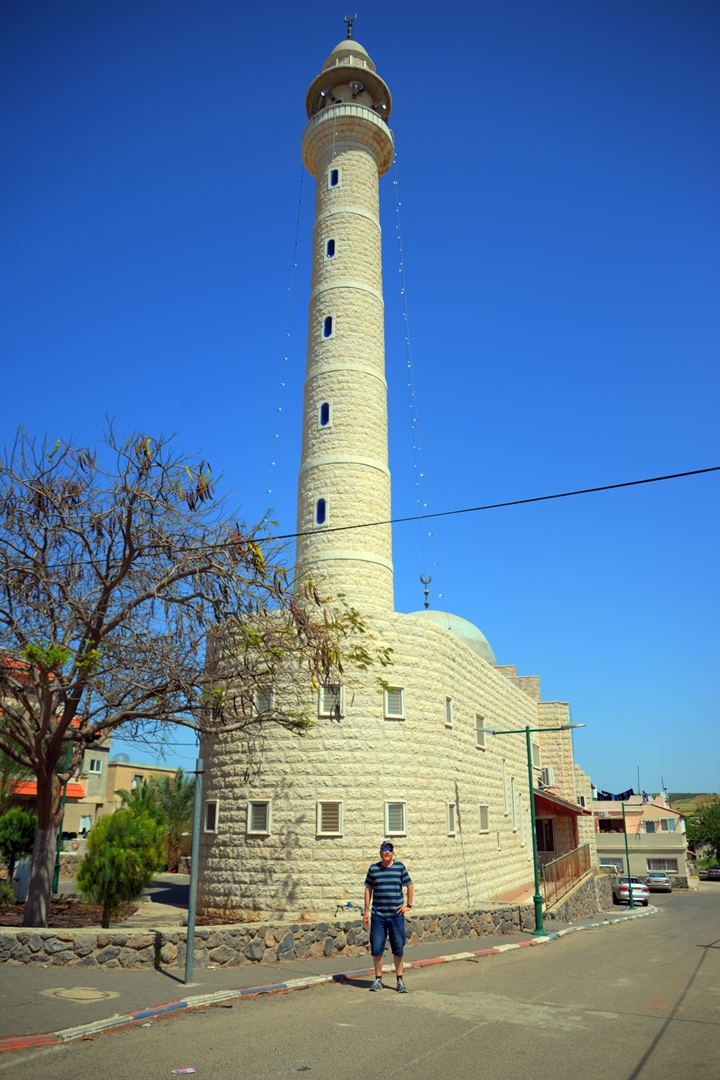 In the center of the roundabout, west of the mosque, is a carved in basalt stone. Perhaps, a foundation stone from one of the ruined structures. 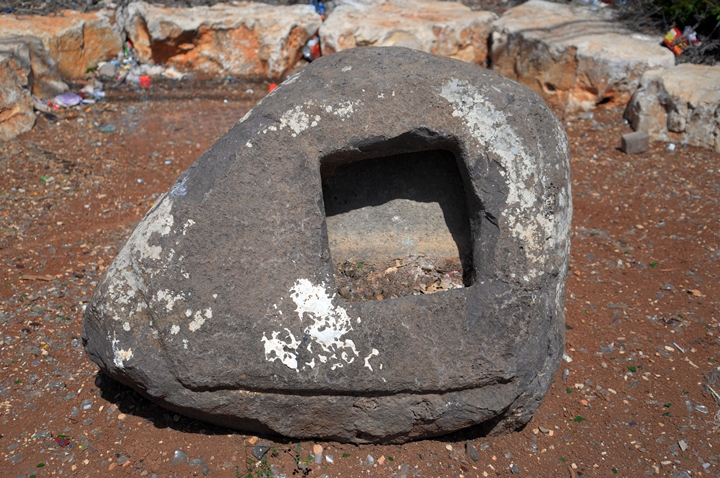 The castle consisted of a strong tower-keep, with a square (26.3m) plan. The tower had 4 groin-vaulted bays.

The vaults were  supported on massive central pier (2.1m square) and the walls are 4.1m thick.

* Note: A groin (or cross) vault is formed by the perpendicular intersection of two barrel vaults. It was in use since 1050 AD.

This photo shows a western view of the ruins. 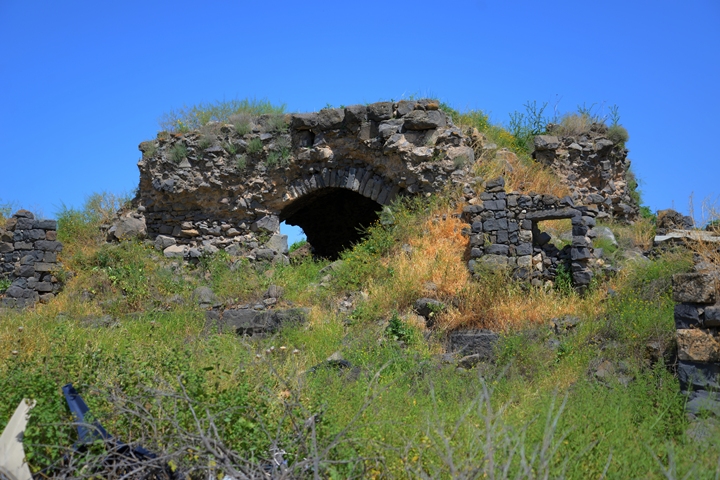 The entrance to the basement of the tower is from the east side. 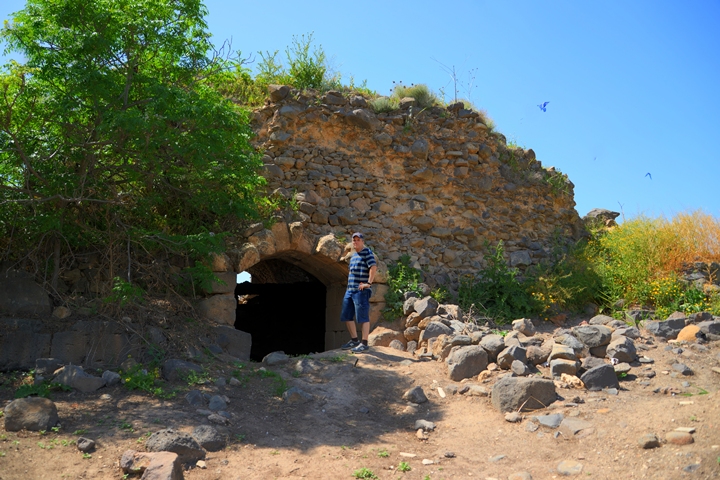 Only the south half of the basement of the tower survives. 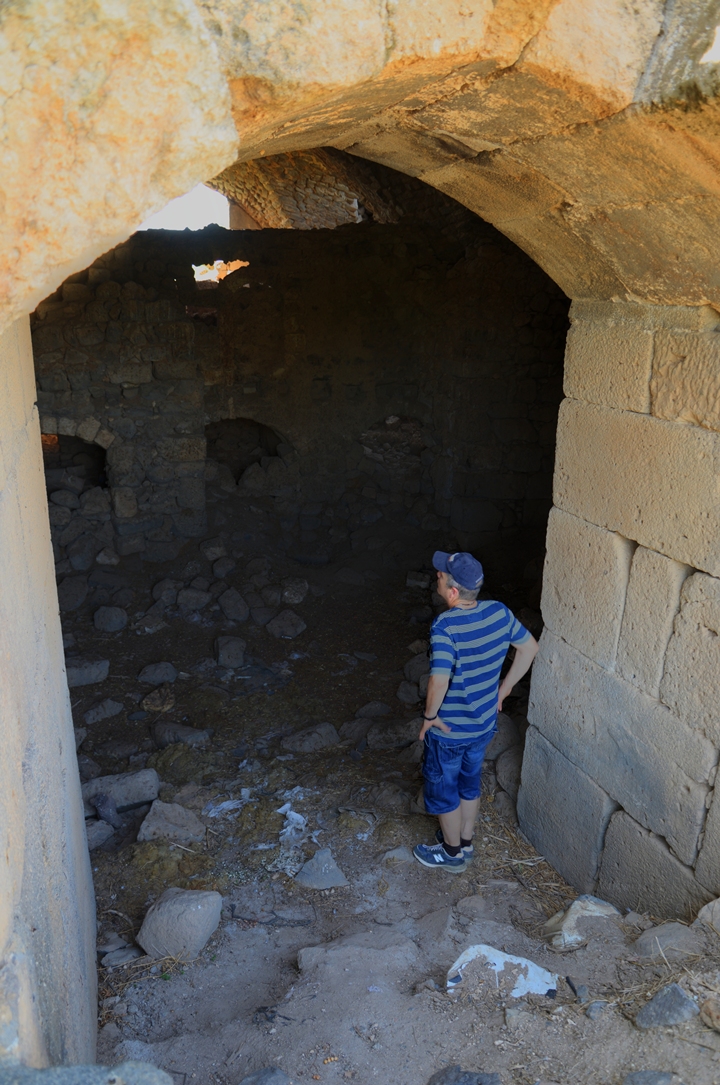 In the photo below is a view of the interior of the tower's basement. The staircase on the left side is modern.

Notice a hole in the ground in the center, behind the pile of rocks. We did not try to descend into it, but a villager told us that there was an escape tunnel that led from the castle to the stream (150m to the east). 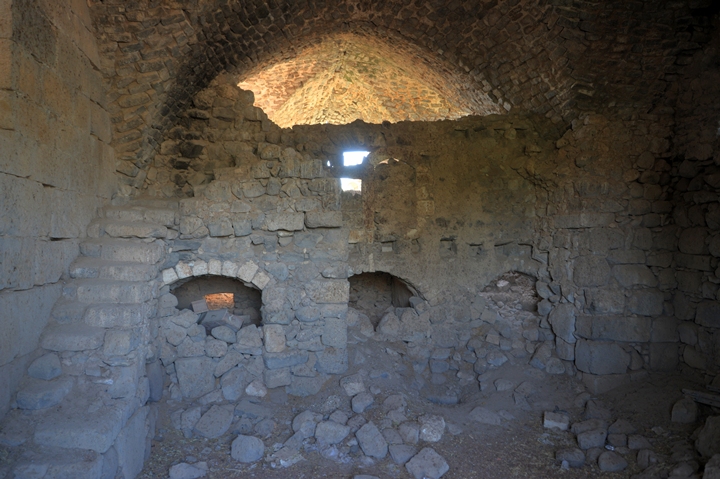 The villager also told us that this place is spooky and he dares not enter into here. This was due to an old practice of placing the corpse of a deceased villagers before it was carried to the nearby graveyard.

On the north side of the entrance are more remains of the fortress. 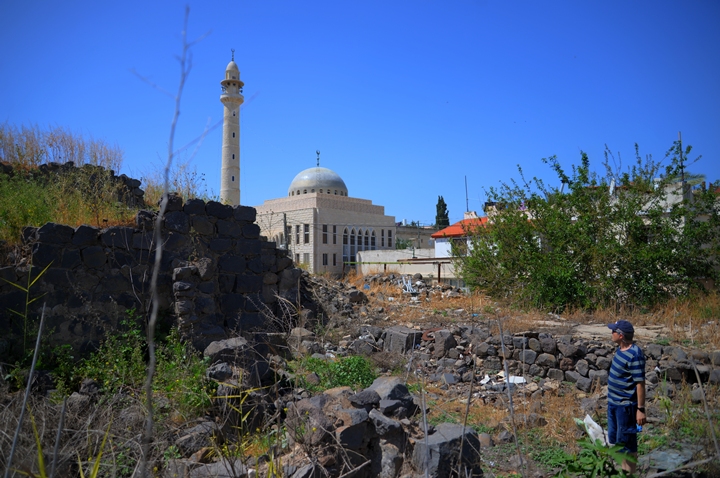 A closer view of the north east side of the ruins. Unfortunately, there is much garbage scattered around here. 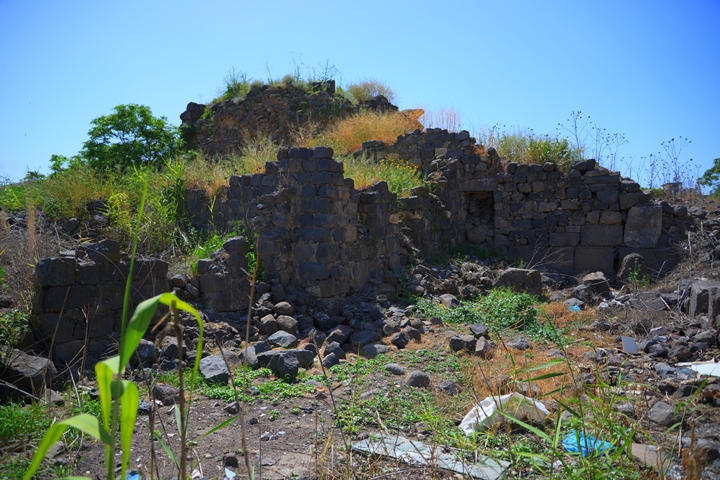 The north side of the ruin is adjacent to the mosque. 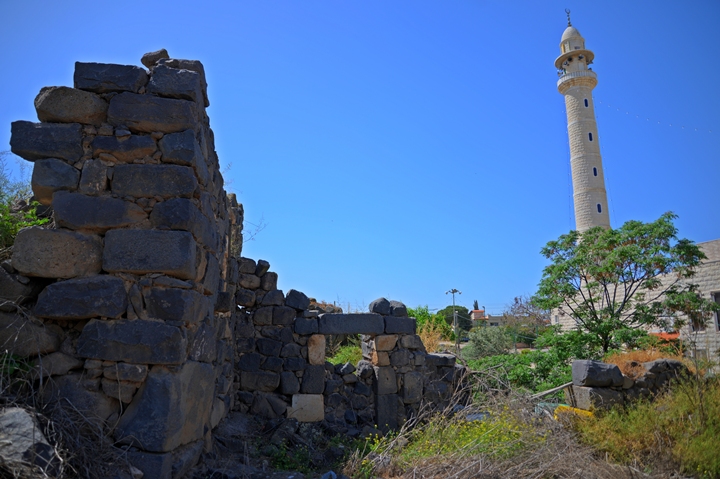 Another view of the northern wall: 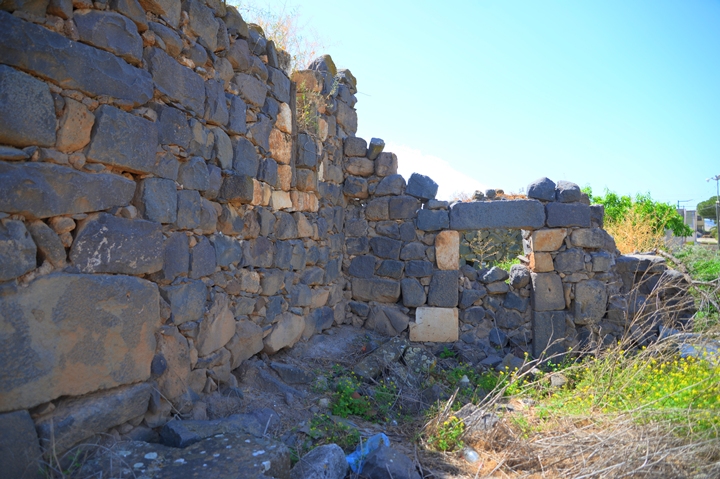 Another section of the wall: 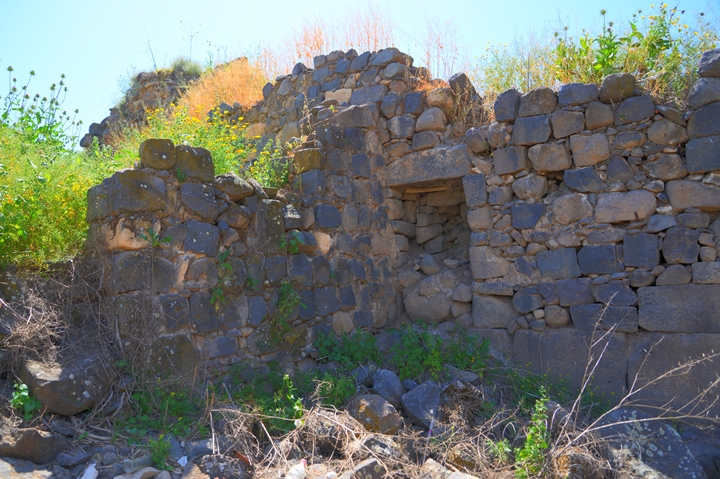 Among the rubble surrounding the northern section are some interesting building blocks: 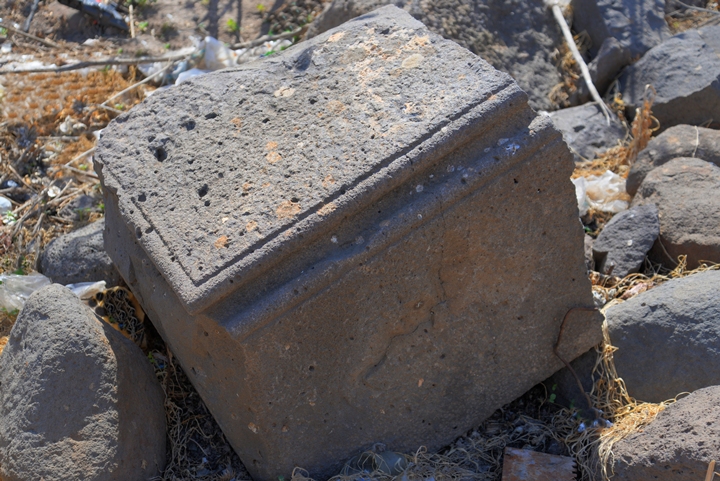 The excavations conducted next to the fortress revealed three strata - Crusader, Mameluke and Ottoman.  No remains predating the Crusader period were yet exposed.

A view towards the east: 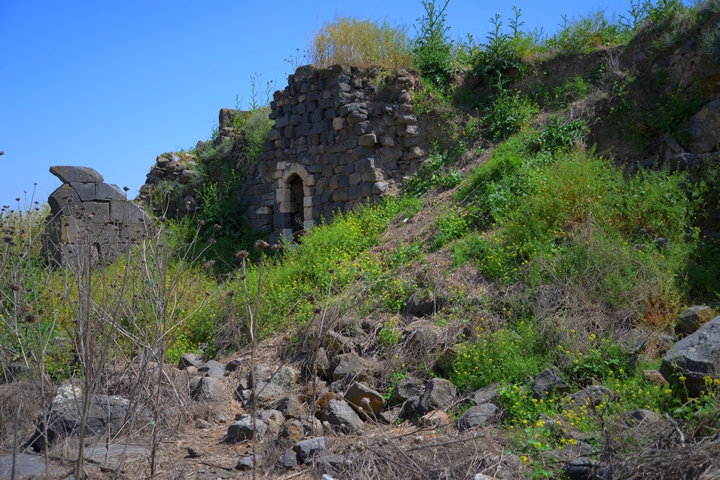 A closer view of the arched window: 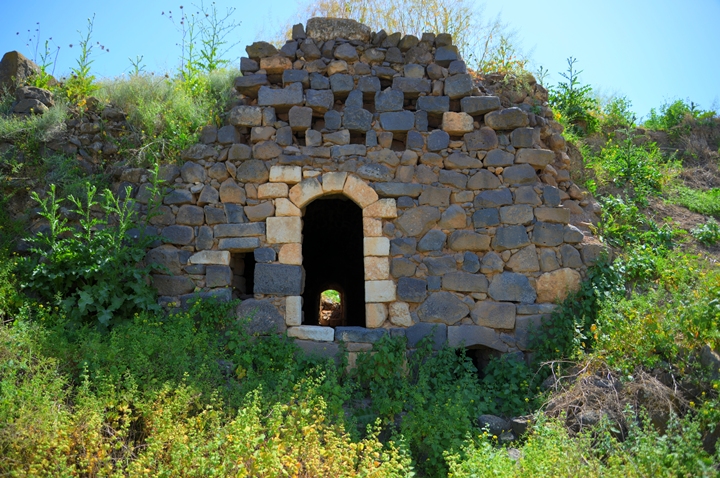 An element on the north side: 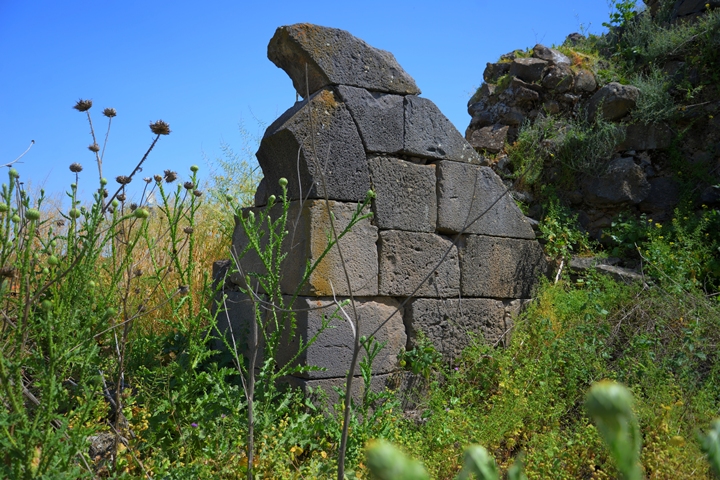 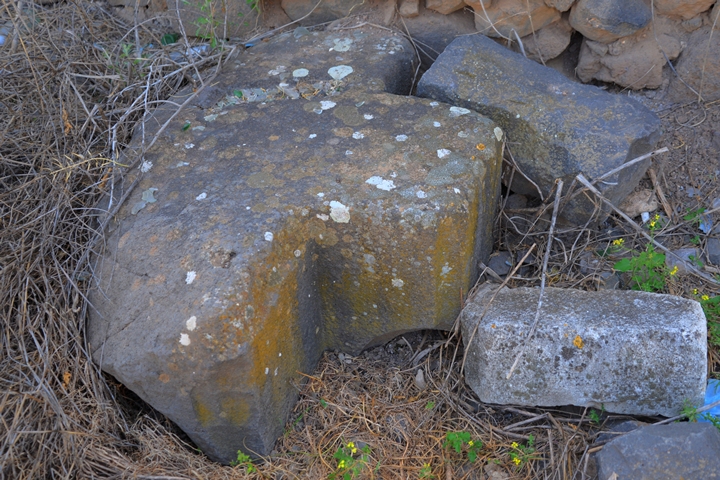 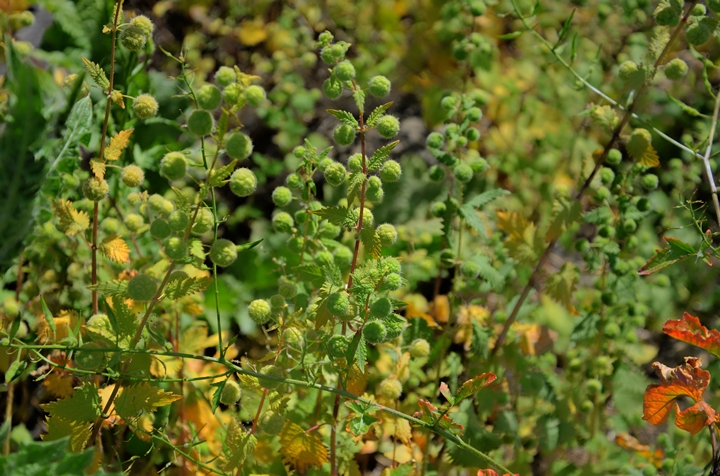 The sirpad (Roman nettle) can be found in the several Biblical texts:

Job 30, 7:  "Among the bushes they brayed; under the nettles they were gathered together".

On the south side of the ruined tower are modern structures, and an old shack. Not a very attractive view, but still an interesting composition of structures. 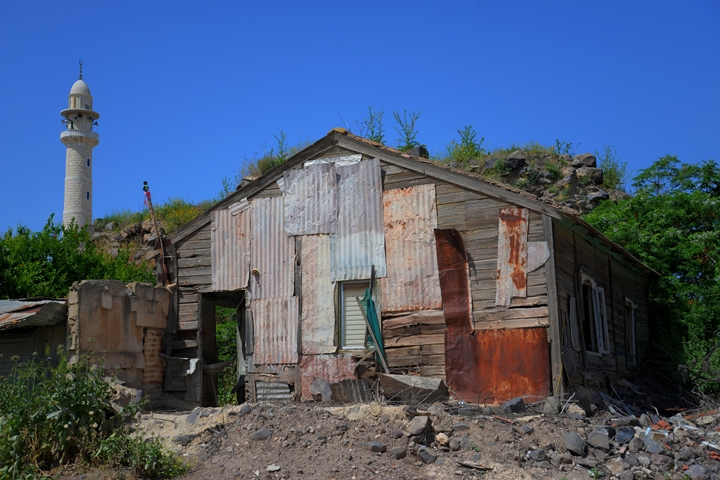 This poor condition of the site calls for a conservation work. In several decades ago the fortress was standing taller and in better shape. Time and neglect are grave factors for the preservation of the site.

(g) Residential quarter on East side

On the east side of the fortress are remains of almost complete structures, dated to the Crusaders, Mameluke and Ottoman periods. 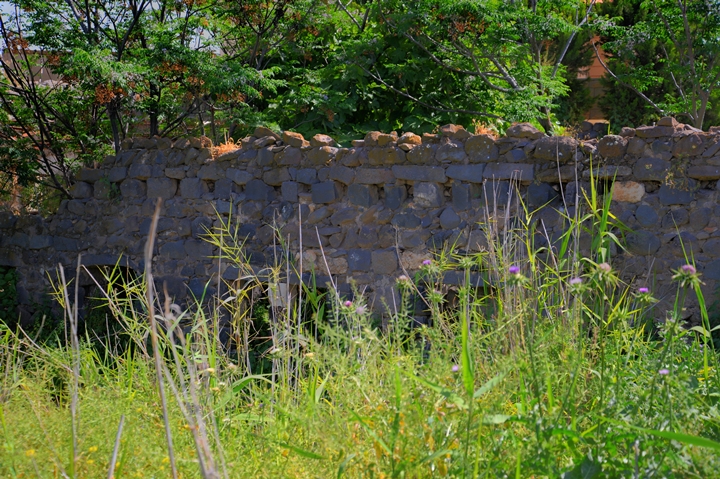 Another wall of a structure is seen next. The higher section (stratum I) is 0.8-1.0m wide, with 3.0-3.5m preserved height, and was dated to the Ottoman period (18th-19th century). Some of the foundations (stratum II) are dated to the Mameluke period, while an earlier building dated to the Crusader period, built on the bedrock (Stratum III), was also exposed in the archaeological excavation (see HA link volume 123). 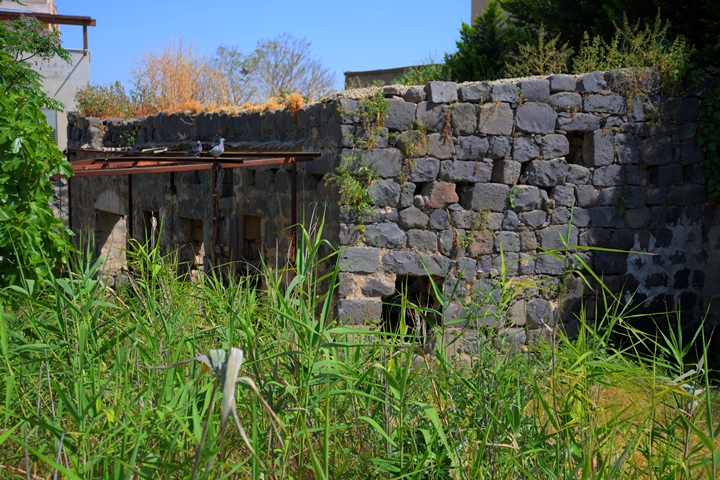 The excavations on this side concluded that the site was first settled in the Crusader period. After the destruction of the fortress in the Mamluke period, the settlement continued to exist and new building were constructed on the Crusader remains, reusing their stones.  During the Ottoman period a residential quarter was constructed alongside the fortress ruins.

Uncle Ronnie stands near the entrance to one of the structures. 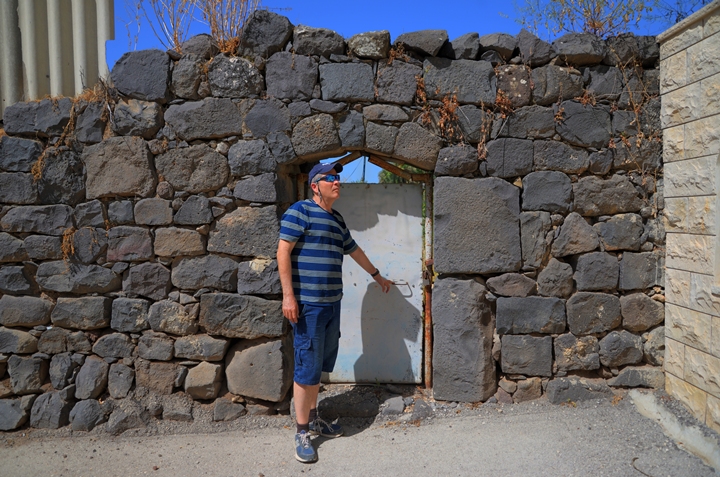