Excavations on the south side of the temple mount revealed important Herodian findings, including base of "Robinson" arch, a paved street, ritual baths and shops that were used by the visitors to the 2nd temple.

1 Kings 2: 10: "So David dwelt in the fort, and called it the city of David. And David built round about from Millo and inward.
And David went on, and grew great, and the LORD God of hosts was with him".

Excavations of recent years have unearthed amazing structures related to the second temple in the south-west side of the temple mount, including the Robinson arch structure, paved street with evidence of the destruction of Jerusalem, and a flight of stairs leading to the temple.

The southern side of the temple mount was fortified and built from the  Herod the Great, King of Israel under the Romans (37BC - 4BC), enlarged and rebuilt the second temple, and made it a magnificent temple. The destruction in 70 AD, after the Jewish revolt against the Romans, left most of Herod's second temple in rubble.

The south-west side of the walled temple mount is seen in the photo below. The Al-Aqsa mosque, with its silver dome, is located along the southern wall. Near the south-western corner are remains of the "Robinson arch", which was part of the structure of the bridge and staircase between the temple mount and the lower city. 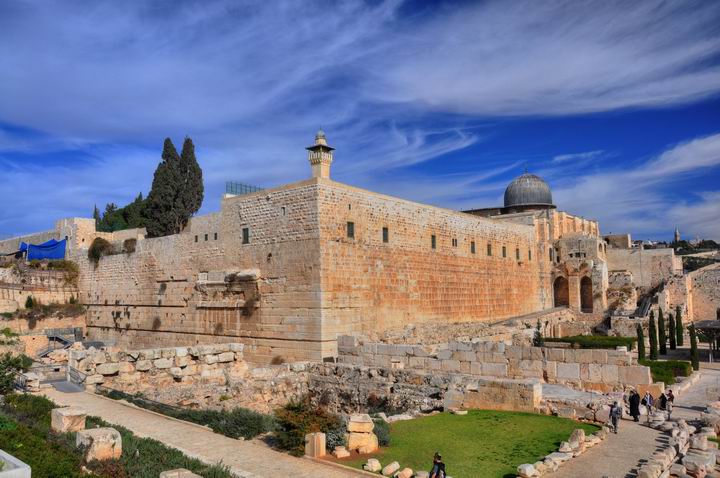 A closer look on the "Robinson arch", which was the eastern base of the bridge and staircase. It is named after the  American researcher, Edward Robinson,  who discovered it in 1838 . 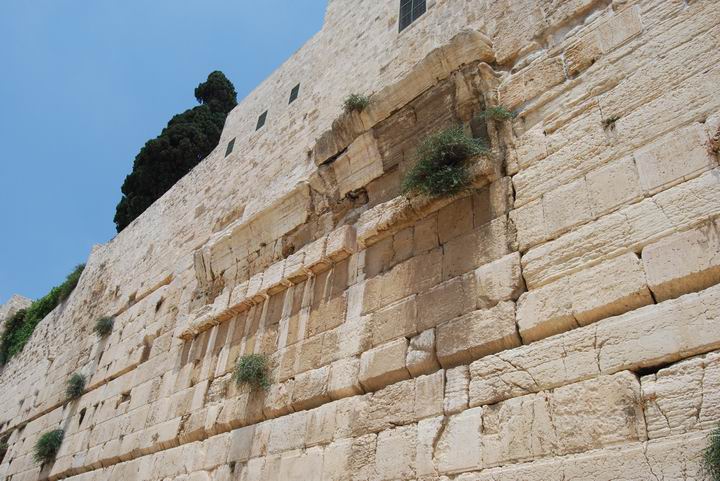 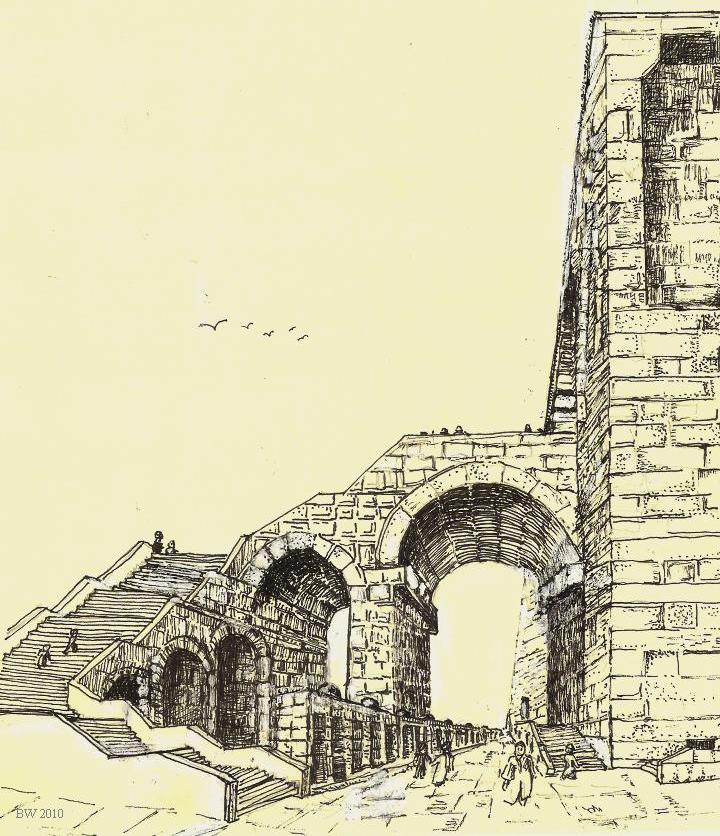 Sketched by Rina, based on the reconstruction by the excavators

A different angle of the arch and the base of the staircase, as viewed from the north-west side, is in the following photo. 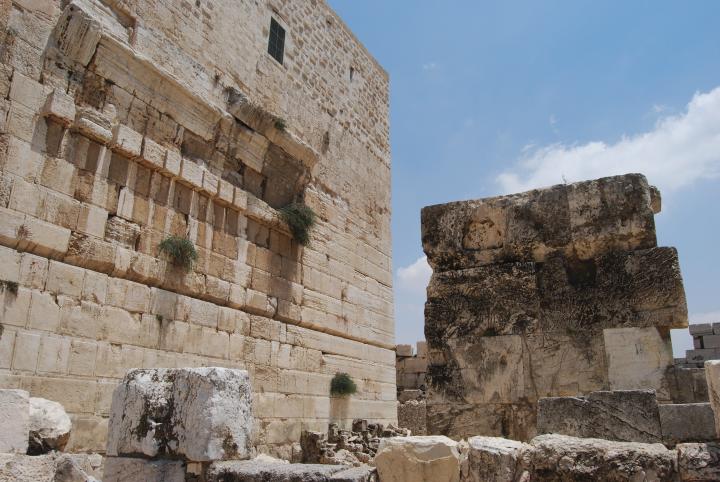 The photo below shows the paved street after the excavations. Also seen in this picture: the southern wall on the right, and a building with 4 shops  on the left. The building was the lower base for the pathway and staircase above the road, that allowed the visitors to climb up to the temple. 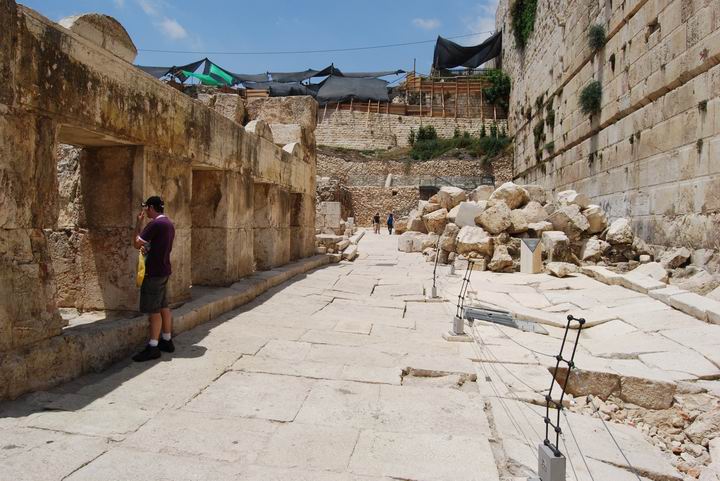 On top of this street the excavators found a number of large stones which were thrown from the temple above into the street by the Roman soldiers, during the leveling of Jerusalem, after it was captured and burnt.  The photo below shows an amazing record of the history - the  street was damaged by the stones that were toppled from the temple mount down into the street. 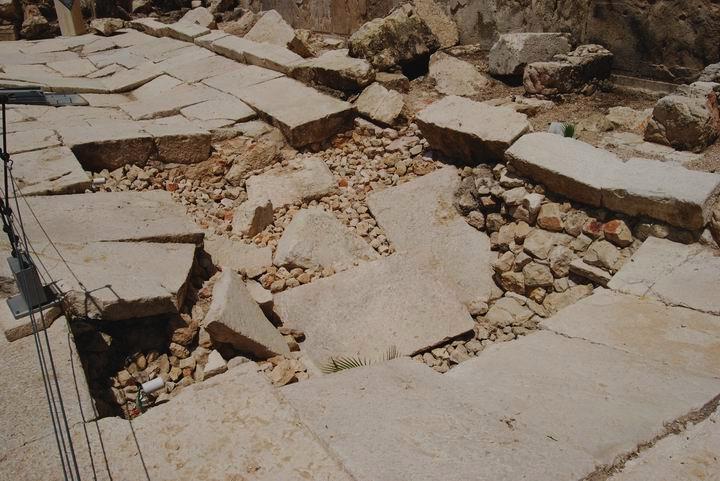 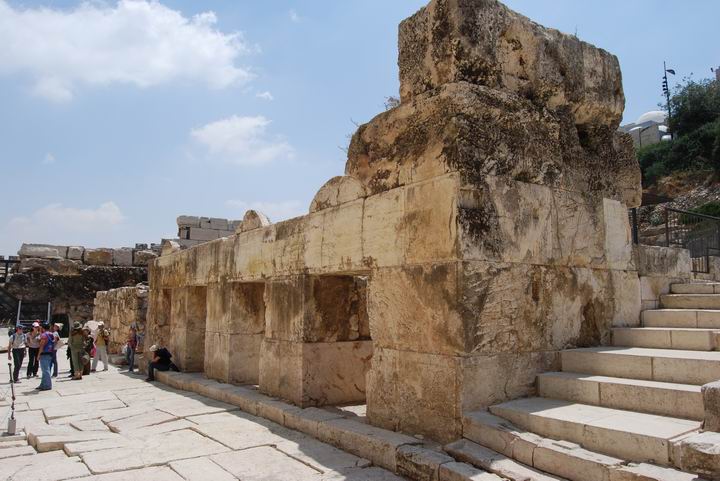 Another amazing find is a large inscribed stone on the south-west corner street. It is inscribed with the Hebrew words: "Lebeith Hatkiah Lehach(kriz)" meaning: "to the trumpeting place to [proclaim?]". This may refer to the sounding of a trumpet to proclaim the onset of the Sabbath on Friday evening, by a priest standing on the temple mount. This Herodian-style stone may have marked the ritual site, and tossed down by the Legionnaires. 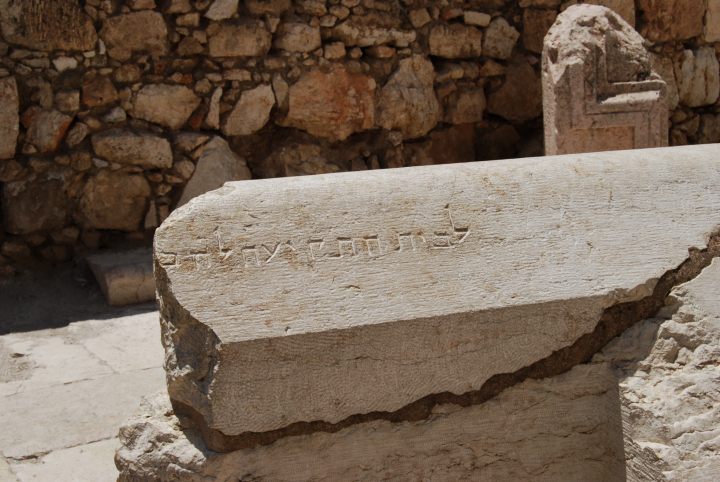 The southern wall excavations unearthed dozens of ritual baths (Mikveh; baptismal). They are located close to the walls and the purpose of these baths were to purify the visitors to the Temple. Looking at the quantity of these baths , these served thousands of  worshippers who came to the temple.

The ritual baths were constructed according to the Jewish religious laws: the structure was built in the rock and not above it, to be in direct contact with the ground. The water should flow, undrawn, into the pool. The amount of water must be at least 1 cubic meter, 1.2M high, and the walls must be plastered. 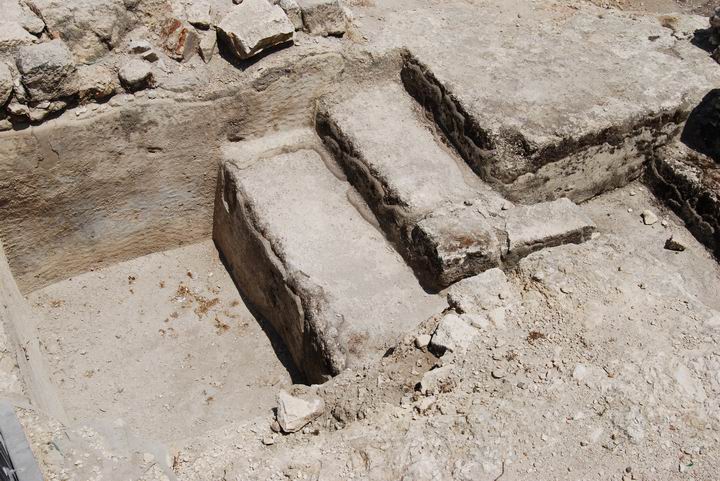 Another example of a rock-cut Mikveh is seen below, and is from the second temple period (1C BC to 1 C AD). There are two sets of separated stairs: one side was for the way down to be purified, while the other side for the cleaned bathers - on their way to the temple (through the "Robinson" arch which is seen in the background). 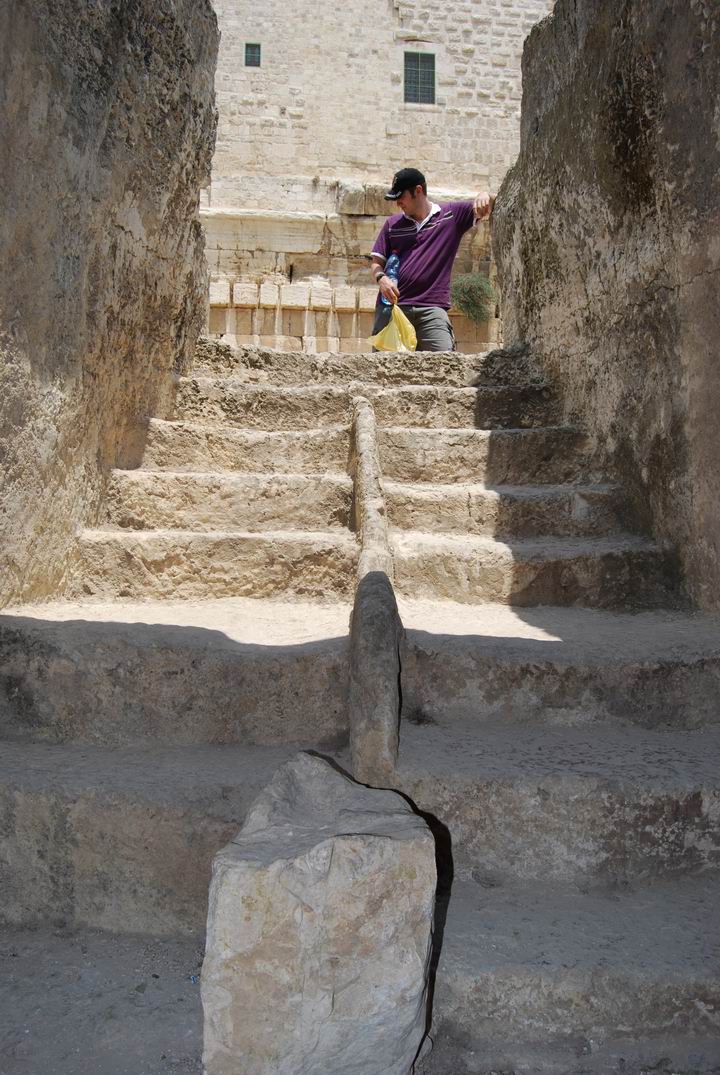 There are dozens of such ritual baths around the south-west and south sides. For example, see a ritual bath near the south staircase to the temple.

A view on the south most side of the temple mount. In the Archaeological garden you can see, among other findings, a part of one of the temple gates  ("Hulda" gates) and a monumental staircase that leads to the Temple Mount, consisting of 15 pairs of alternating broad and narrow steps. These steps lead the visitors up to the  gate, through a tunnel, and up into the temple. 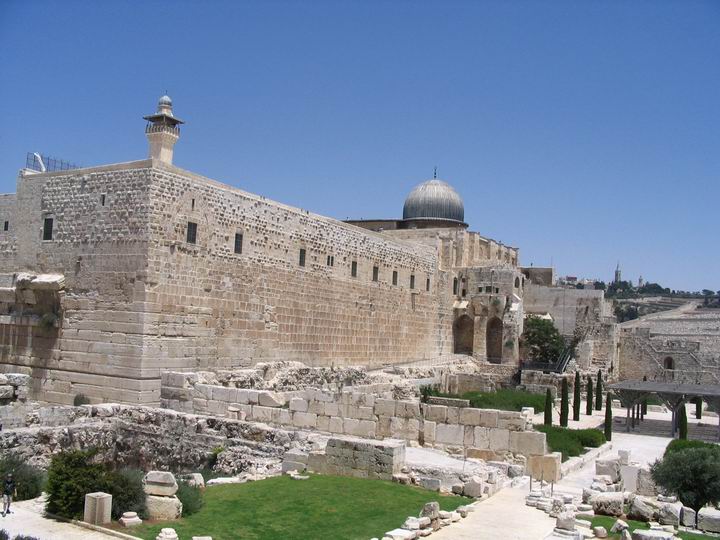 Above, in the temple mount, the Silver dome of the Al-Aksa mosque (built in 705AD).

Outside of the temple mount, along the southern wall, are ruins of a palace dated to the Arab period known as the Ummayad Calpihate (661-750AD). The western wall of this palace can be easily seen in the photo above. The walls of this palace were based on huge building blocks (80 x 80 cm) that seem like Herodian stones, but are actually from this later period. This can also be seen in the following picture. 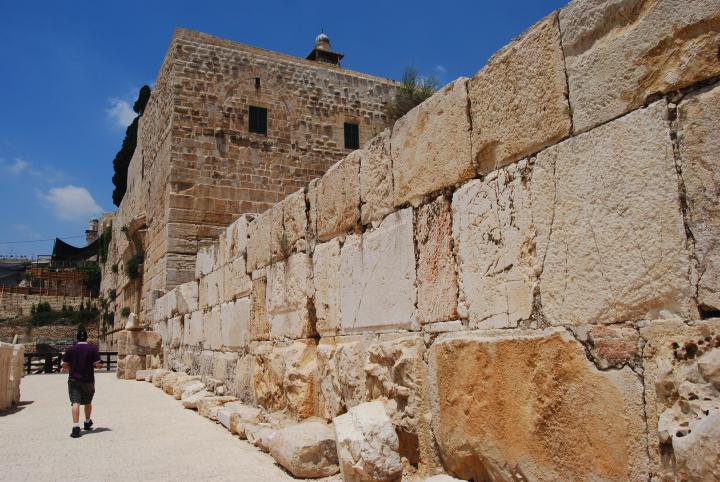 An eastern view of the palace is shown below. The wall from the previous picture is way back at the end of the garden. On the left, behind the roofed pergola, is the southern wall museum and visitors center. Behind it, on the hill, is mount Zion and the Jewish quarter. 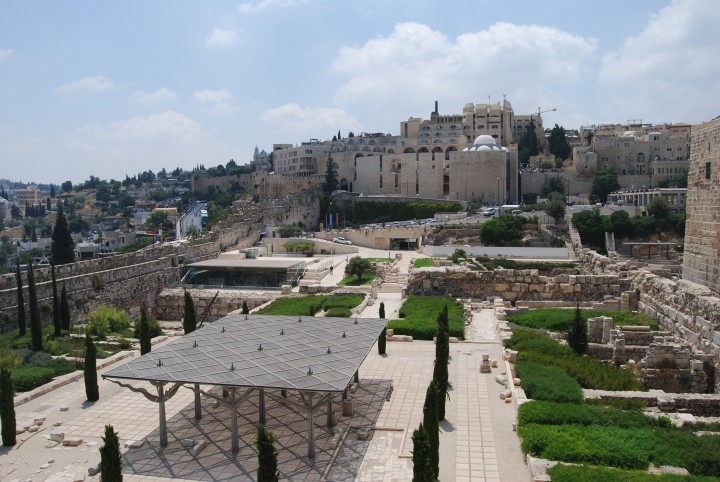 There were several Umayyad public structures along the south walls. Near the Hulda Gates staircase, under the Al-Aqsa mosque (seen in the background below) are traces of the ruins of a colonnaded palace, which reused columns from earlier Byzantine and Roman structures. 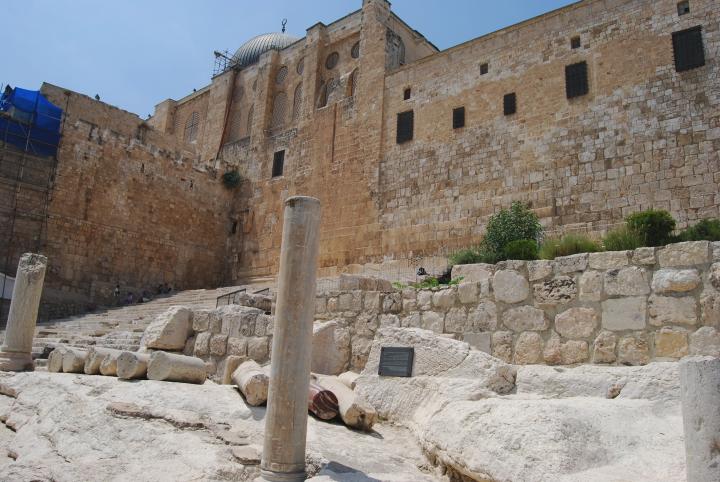 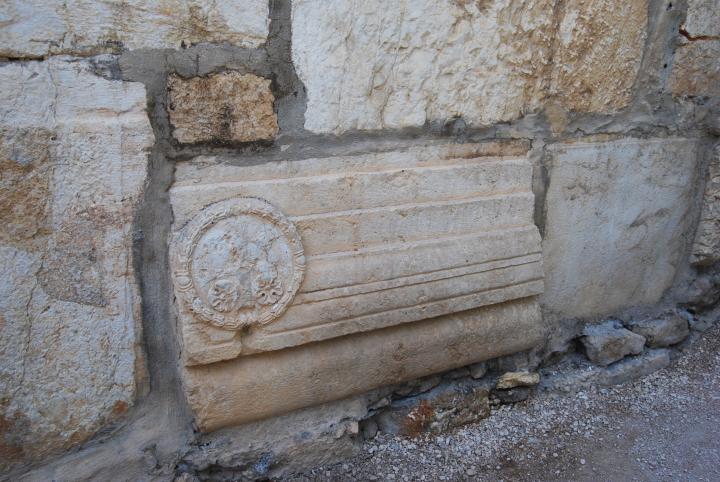 One of these is a Roman rounded pillar with a unique inscription, found in the ruins of the Umayyad palace.  It reads in abbreviated Latin:    "IMP CAESAR VESPESIAN[US] AVG IMP T CAE SAR VESP AVG L AVG PR PR LEG X FR").

This inscription includes the name of Vespasian Caesar, the conqueror of Jerusalem in 70AD, and the 10th Legion  Fretensis ("LEG X FR" or: "Tenth legion of the sea strait") which was  the central Roman legion during the revolt and afterwards.

"So David dwelt in the fort, and called it the city of David. And David built round about from Millo and inward.
And David went on, and grew great, and the LORD God of hosts was with him".

Josephus, the Commander of the Jewish revolt against the Romans, and later a historian of the period. He writes about the construction of the 2nd temple by Herod, which expanded the previous temple of the returnees. Note that cubit unit is about 44cm.

"So Herod took away the old foundation, and laid others, and erected the temple upon them, being in length a hundred cubits, and in height twenty additional cubits, of which [twenty], upon the sinking of their foundations fell down; and this part it was that we resolved to raise again in the days of Nero. Now the temple was built of stones that were white and strong, and each of their length was twenty-five cubits, their height was eight, and their breadth about twelve; Now in the western quarters of the enclosure of the temple there were four gates; the first led to the king's palace, and went to a passage over the intermediate valley; two more led to the suburbs of the city; and the last led to the other city, where the road descended down into the valley by a great number of steps, and from there up again by the ascent for the city lay near to the temple in the manner of a theater, and was encompassed with a deep valley along the entire south quarter; but the fourth front of the temple, which was southward, had indeed itself gates in its middle, as also it had the royal cloisters, with three walks, which reached in length from the east valley to that on the west, for it was impossible it should reach any farther: and this cloister deserves to be mentioned better than any other under the sun; for while the valley was very deep, and its bottom could not be seen, if you looked from above into the depth, this further vastly high elevation of the cloister stood upon that height, insomuch that if anyone looked down from the top of the battlements, or down both those altitudes, he would be giddy, while his sight could not reach to such an immense depth. This cloister had pillars that stood in four rows one near to the other all along, for the fourth row was interwoven into the wall, which [also was built of stone]; and the thickness of each pillar was such, that three men might, with their arms extended, fathom it round, and join their hands again, while its length was twenty-seven feet, with a double spiral at it basis; and the number of all the pillars [in that court] was a hundred and sixty-two. Their chapiters were made with sculptures after Corinthian order, and caused and amazement [to the spectators], by reasons of the grandeur of the whole. These four rows of pillars included three intervals for walking in the middle of this cloister; two of which walks were made parallel to each other, and were contrived after the same manner; the breadth of each of them was thirty feet, the length was a furlong, and height fifty feet; but the breadth of the middle part of the cloister was one and a half of the other, and the height was double, for it was much higher than those on each side; but the roofs were adorned with deep sculptures in wood, representing many sorts of figures. The middle was much higher than the rest, and the wall of the front was adorned with beams, resting upon pillars, that were interwoven into it, and that front was all of polished stone, insomuch that its fineness, to such as had not seen it, was incredible, and to such as had seen it, was greatly amazing".