Remains of a Biblical city, dated to the times of David and successor kings of Judah. It was an important fortified gateway city, protecting the western flank of the Kingdom.

Remains of a Biblical city, dated to the times of David and successor kings of Judah. It was an important fortified gateway city, protecting the western flank of the Kingdom, situated along the valley of Elah.

The following aerial view shows the points of interest, with the valley of Elah in the center.  The site is located south of road #375.

You can point on the yellow squares to navigate to the selected place within this page or other web pages. 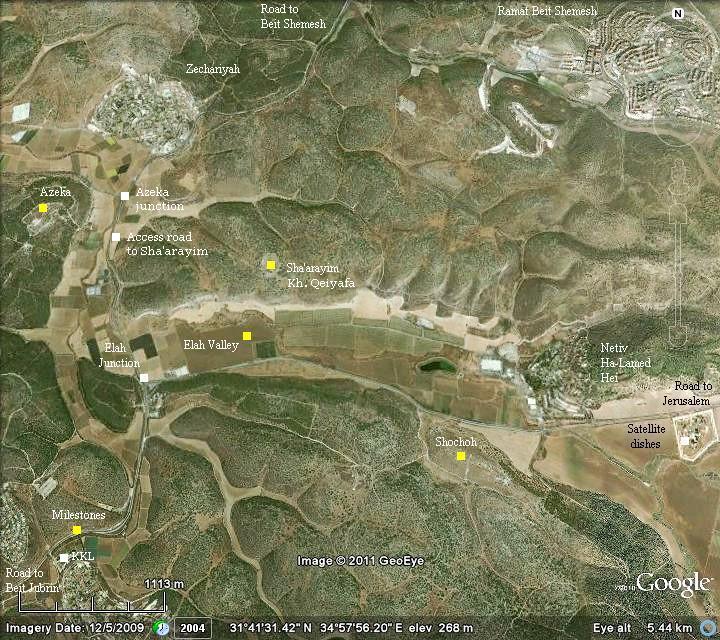 The city of Sochoh (also: Socoh, Sokho, Shochoh) was one of the cities of the tribe of Judah (Joshua 15: 20, 35-36): "This is the inheritance of the tribe of the children of Judah according to their families.... and Adullam, Socoh, and Azekah, And Sharaim,...". Its location according to this verse is between Adullam and azekah, and indeed the ruins of Sochoh are located exactly in the middle between Kh. Adullam (4 KM to the south-east) and Tell Azekah (4KM north-west).

Sochoh was an important fortified city during the times of the Judea Kingdom (11thC through 6th C BC), defending the kingdom against attacks through the valley of Elah on its western frontier. There are several texts that emphasize its strategic importance to the Kings of Judah:

King Saul: The city appeared in the Biblical account of the battle between David and Goliath of Gath. This famous battle is detailed in the web page of the Valley of Elah.  According to the Bible, it is located near the place of the battle in the valley of Elah (1 Samuel 17: 1): "Now the Philistines gathered together their armies to battle, and were gathered together at Shochoh, which belongeth to Judah, and pitched between Shochoh and Azekah, in Ephesdammim. ".

King  Rehobam, son of Solomon, fortified the city  (2 Chronicles 11 5-12):  "And Rehoboam dwelt in Jerusalem, and built cities for defense in Judah. He built ...  Shoco, and Adullam, And Gath, and Mareshah, and Ziph, And Adoraim, and Lachish, and Azekah... And he fortified the strong holds, and put captains in them, and store of victual, and of oil and wine. And in every several city he put shields and spears, and made them exceeding strong...".

The Assyrian empire, a rising force in the region, conquered the North Kingdom of Israel in 732BC, destroying most of the cities and villages in the land. The South Kingdom of Judah managed to survive this onslaught by teaming up with the Assyrians, but not for long. After the death of the Assyrian King Sargon  II (722 – 705BC), King Hezekiah - son of Ahaz - mutinied against the Assyrians, joining other cities in the area who attempted to free themselves from the Assyrian conquest. Hezekiah recaptured Sochoh  as well as other cities in the area (2 Kings 18 8): "He smote the Philistines, even unto Gaza, and the borders thereof, from the tower of the watchmen to the fenced city".

After the Assyrian intrusion, the city of Sochoh was in ruins for a 1,000 years.

The ruins of the Biblical city are located on the western side of the hill, and were reused during the Roman/Byzantine period. The village extended to the east in this time.  Eusebius Pamphili (better known as Eusebius of Caesarea), a 4th C Greek historian of the Church, wrote in his book "Onomasticon" that at his times there were "twin villages" on the hill - an upper and lower. He wrote: "Sokcho - two villages nine miles from Eleutheropolis on the road to Jerusalem. The upper and the lower are named Sokchoth.  tribe of Juda".

The area around the valley of Elah  was  examined in the Palestine Exploration Foundation (PEF)  survey (1866-1877) by Wilson, Conder and Kitchener. The valley of Elah appears on this map of 1878 in its Arabic form -  "Wadi es Sunt" (the valley of the Acacia).  An ancient road traverses the valley - marked as a double dashed line crossing from left to right - and passing the site.

Note that there are other sites in the area of Judea called "Khürbet Shuweikeh" (e.g, 12KM north of Jerusalem) and Biblical cities with the name "Sochoh" (e.g., in the land of Hefer - as per 1 Kings 4:10).

The site has not yet been thoroughly excavated, although there are plans to start digging there in a large scale. In limited excavations, the IAA reports (July 2011):  "An excavation was conducted at the foot of the northern slope where a Byzantine building from the fifth–sixth centuries CE was exposed. Remains from Iron Age II were uncovered in another excavation at the foot of the northern slope, and walls dating to the Middle Bronze Age were discerned in probe trenches...".

During late Winter and Spring the hill is covered with flowers and  attracts visitors, so it is commonly known as the "hill of Turmus" (the blue/purple Lupinus flower). 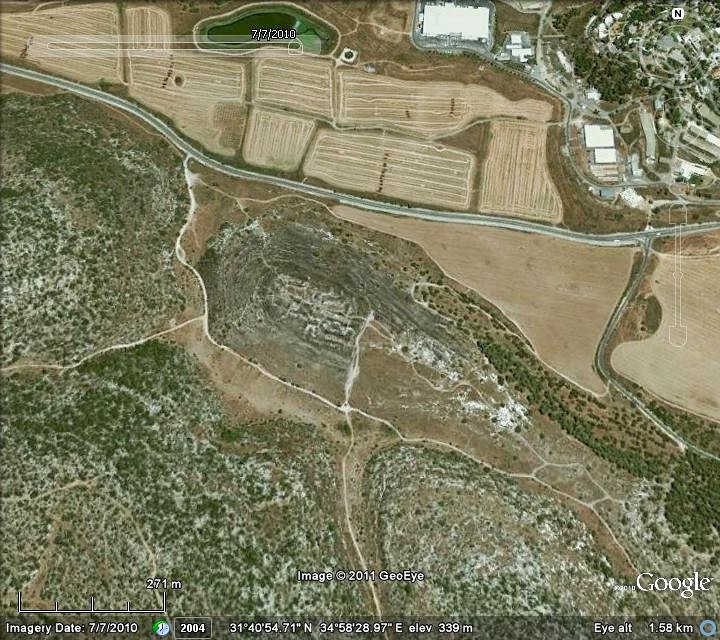 An aerial view of the site was captured in June 2015 over its western side. On top of the hill are traces of its ruins. The site extends towards the eastern side, which is not visible in this view.

In the left background is a eastern section of the valley of Elah. Behind are the mountains of  Gush-Etzion and  Hebron. 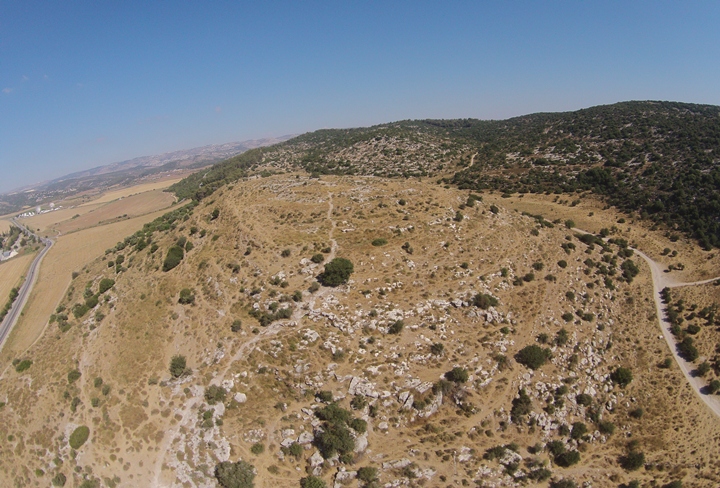 "Fly" over the site with this drone video:

(b) Foothills of the Western hill

A convenient place to start your hike is on the western side of the hill, where you can turn off the main road and leave you car. On your way up you may notice a large tree that planted itself into one of the underground cisterns. 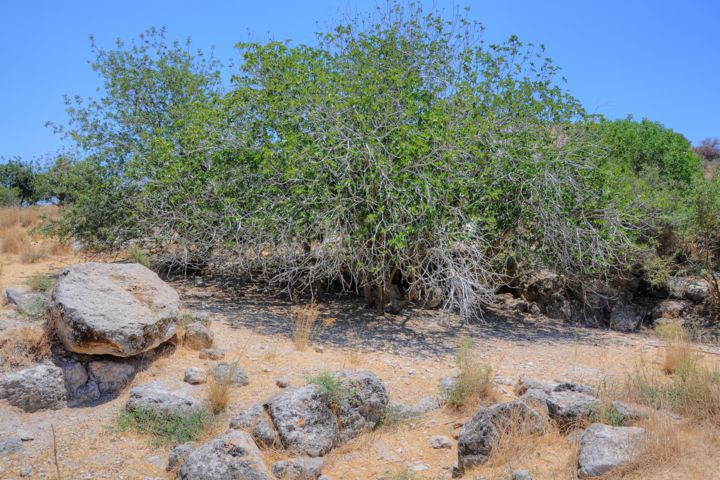 Around the hill are several Elah trees (Terebinth -Pistacia), which gave this valley its name. 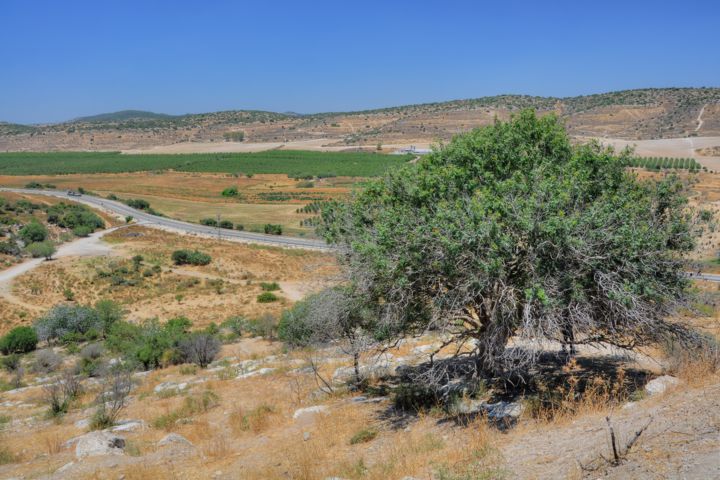 You need to be careful while climbing up the hillside - not only due to the height difference of 70m from the bottom of the valley to the top of the hill, but also due to snakes (such as this skin). 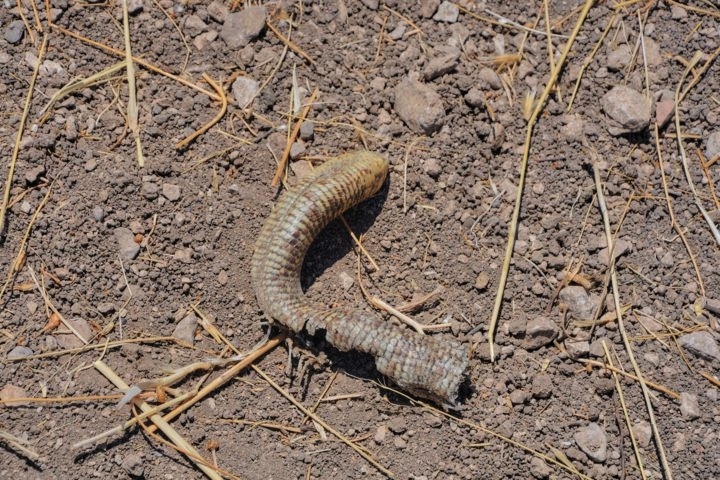 (c) Top of the Western hill

On top of the hill are traces of walls, roughly hewn stones, ruins of houses, and cisterns. This site was not yet excavated (2011), although excavation permits are in the pipeline. The antiquities get denser as you get closer to the top.

The western hill dates primarily to the Biblical Iron-Age period, with some remains from the later Roman/Byzantine period. 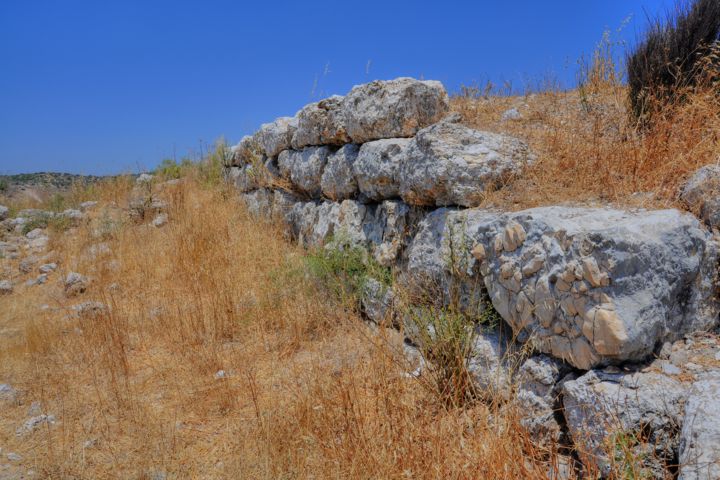 A view from the south side of the top of the hill, looking westwards. The major ruins cover the top of the western hill, with an area of about 100m wide (south-north) by 200m (west-east). 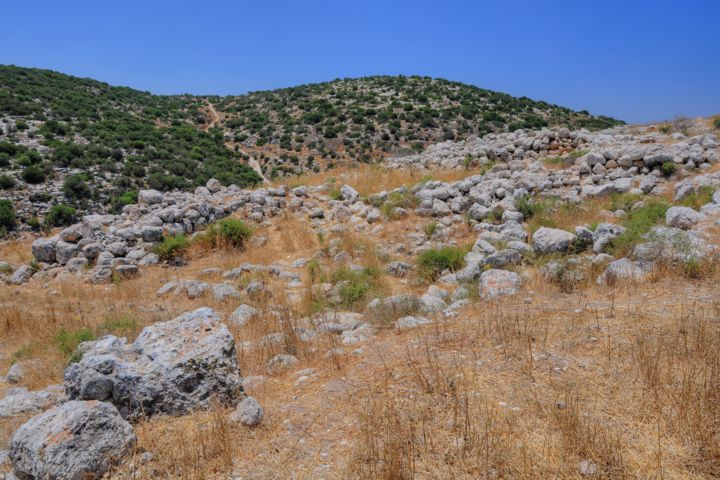 Some parts on the south side are clear of visible structures, since they are buried underground. 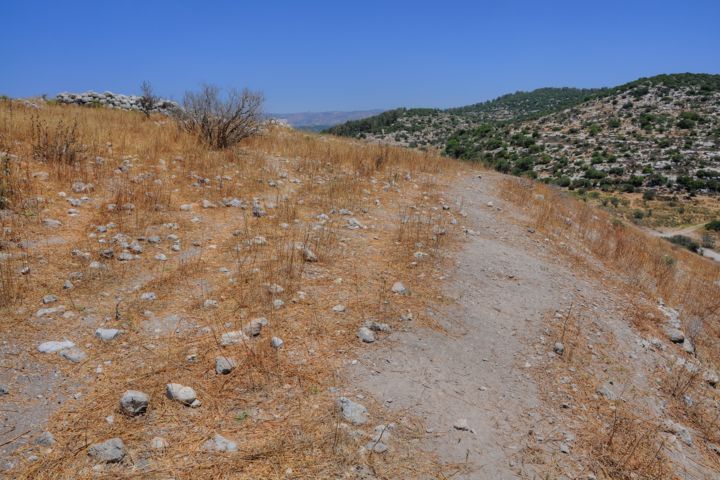 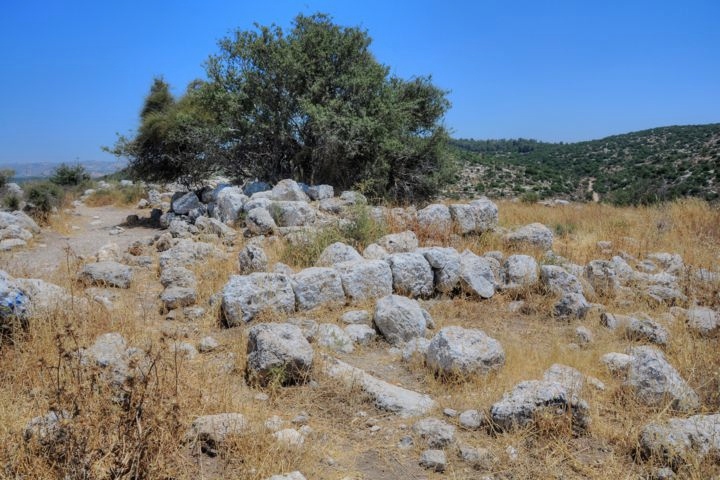 A southern view of this location: 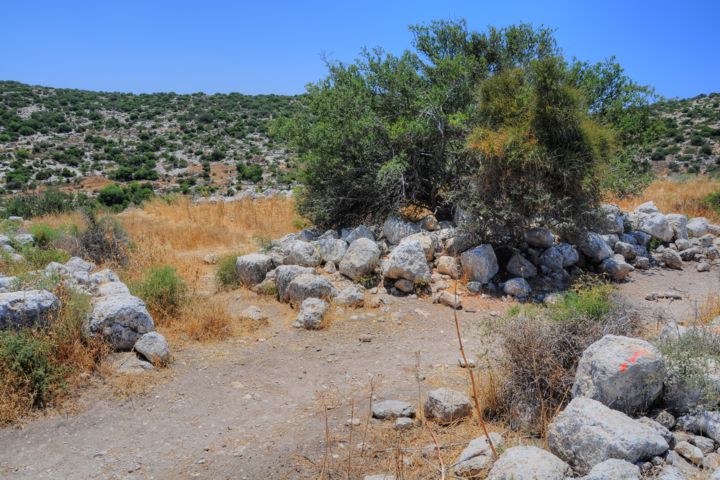 (d) East side of the Western hill

Tell Sochoh ruins continue to the east, where they end in the middle of the hill top. 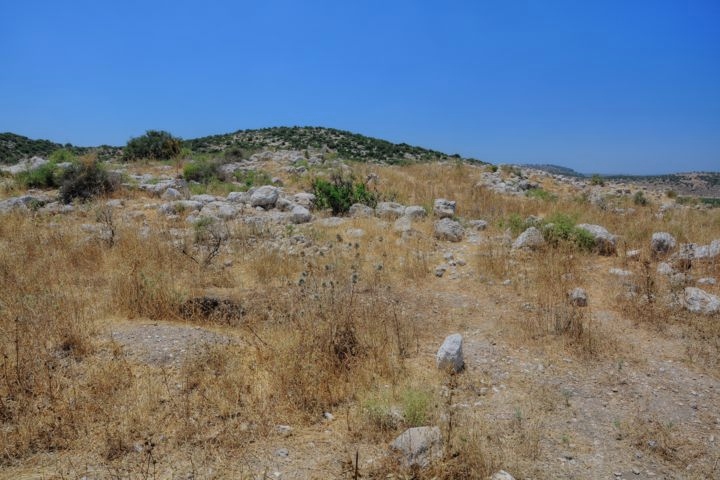 The north-east walls of Tell Sochoh  are seen below. 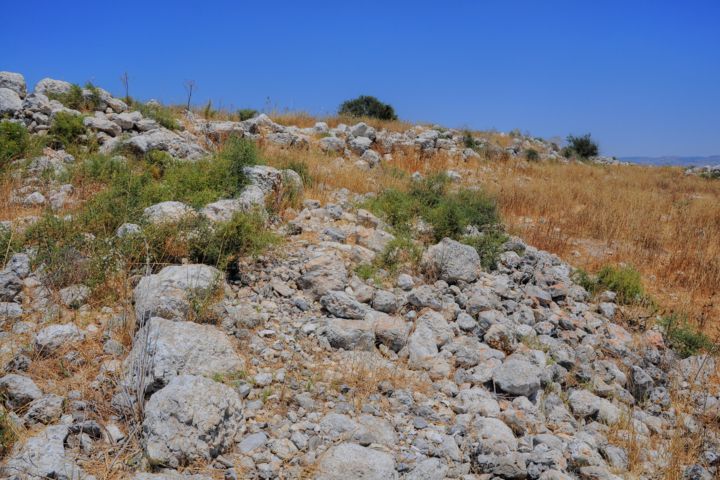 The next picture shows a view from the top of the ancient site, looking eastwards to the eastern edge of the valley of Elah.  The Kibbutz Netiv Halamed-Hei is on the left side, while the satellite dishes are seen in the far center.  On the far right side is where the valley of Elah turns to the south where the ancient site of Adullam is located (it was also mentioned in the list of fortified cities by Rehobam). 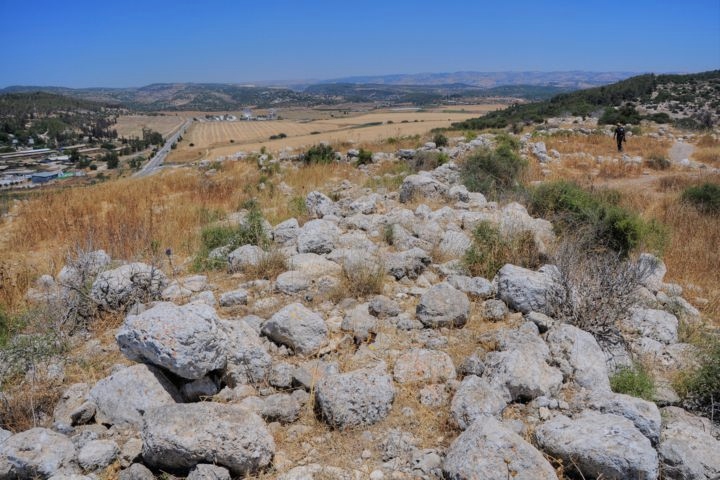 To the east of the ruins of Sochoh are the ruins of Khirbet Shuweikeh. Here are remains of a later dated village - from the Roman/Byzantine period.  The Arabic name of the ruins  - Shuweikeh - actually preserves the ancient Hebrew Biblical name, although Sochoh is located on the western hill. 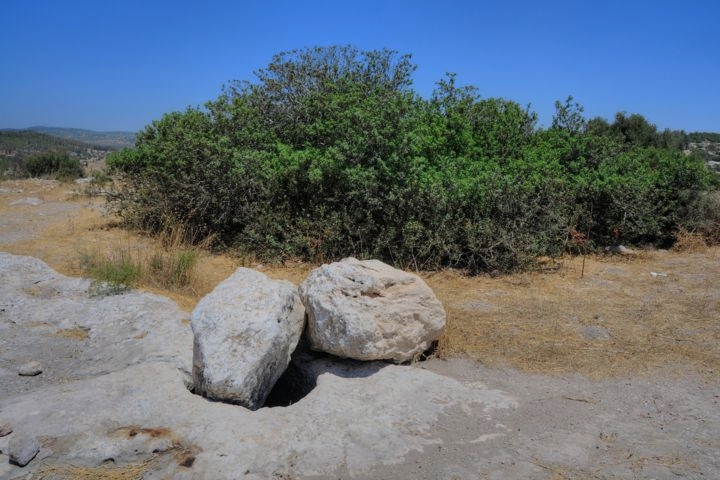 This side has less scattered rocks like on the western side. There are, however, many agriculture installations and cisterns hewn into the rock.  The following pictures show a sample of these installations. 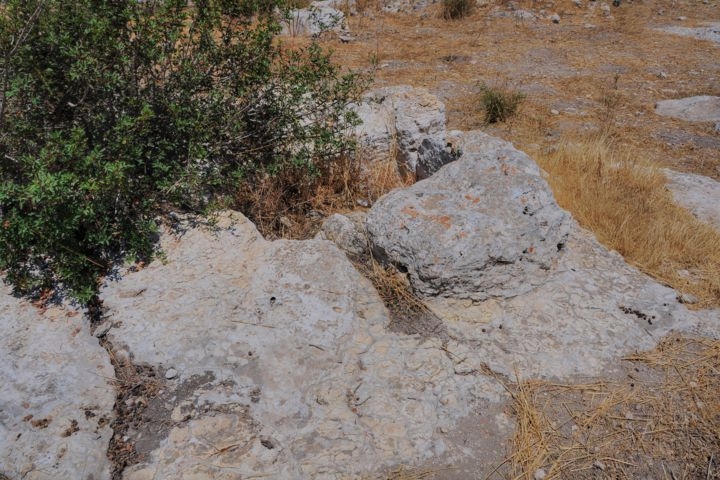 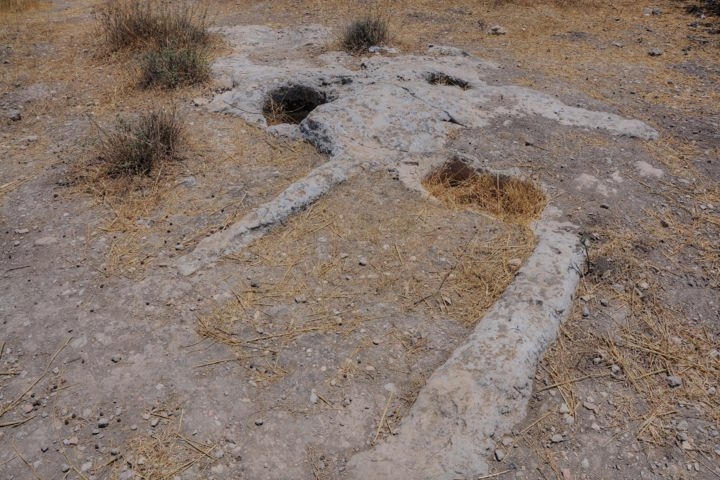 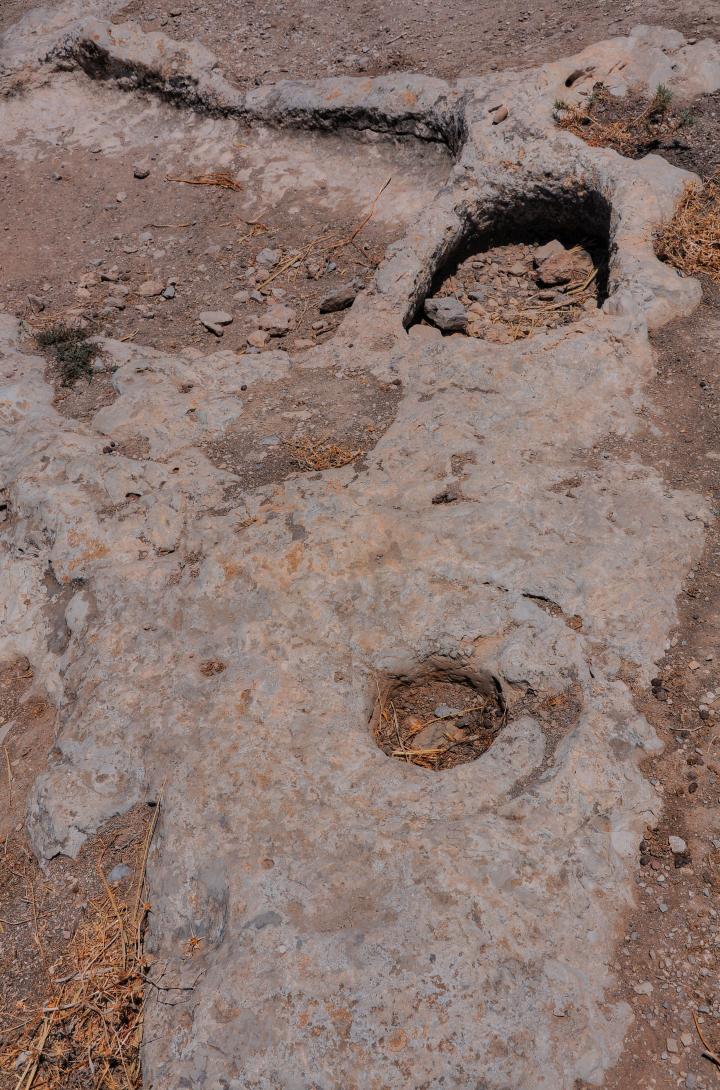 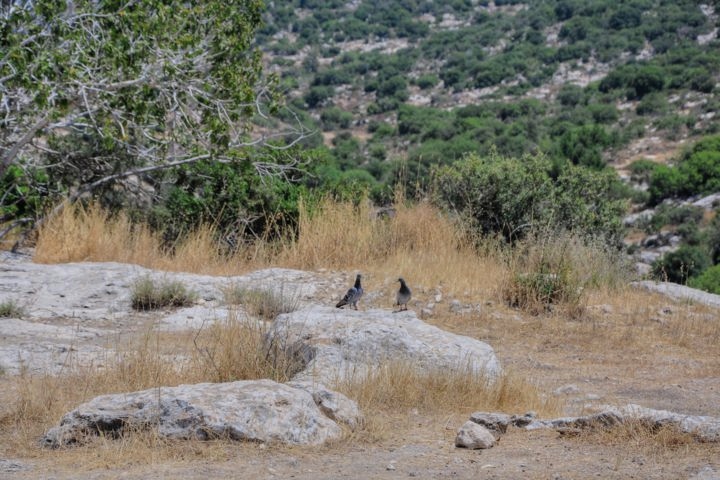 An ancient winepress under the shade of a tree: 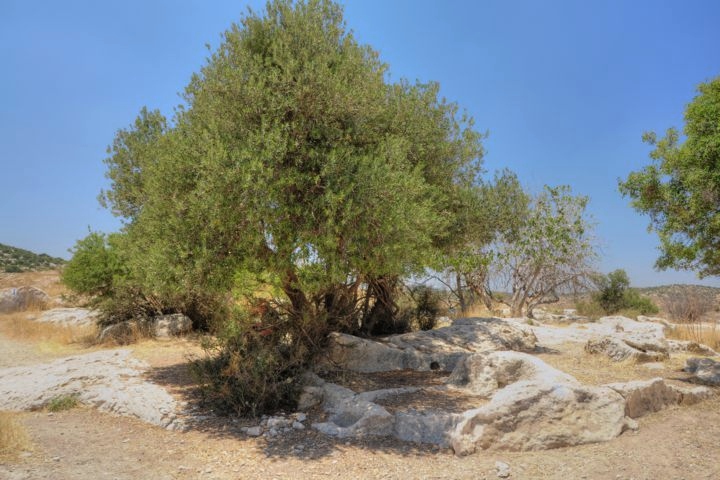 A closer view of the winepress: 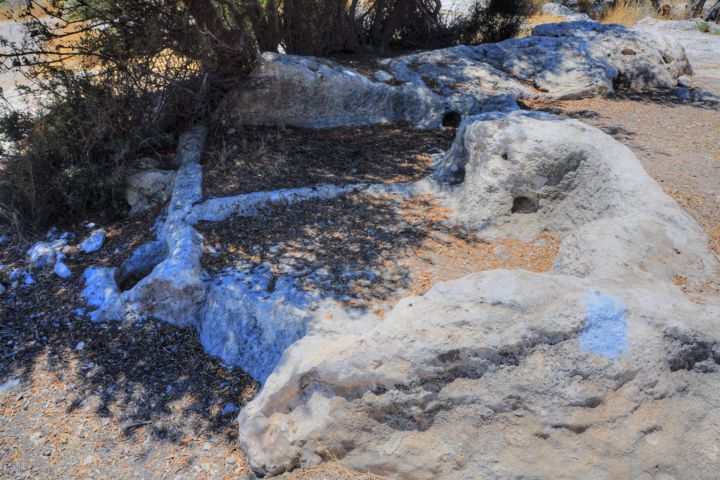 A fig tree grows in one of the cisterns: 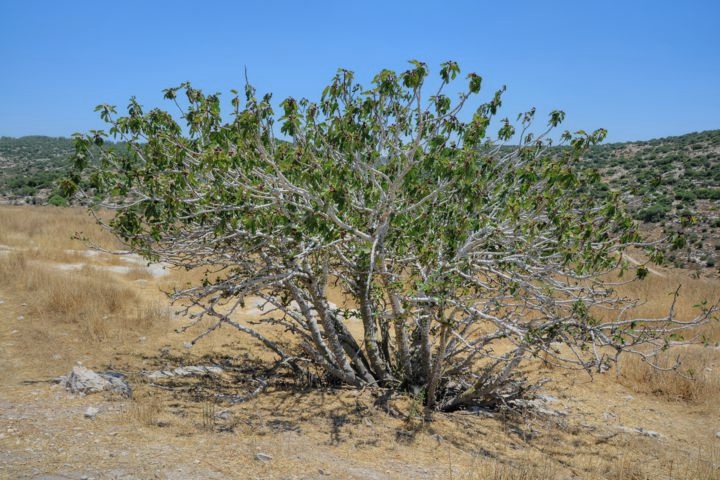 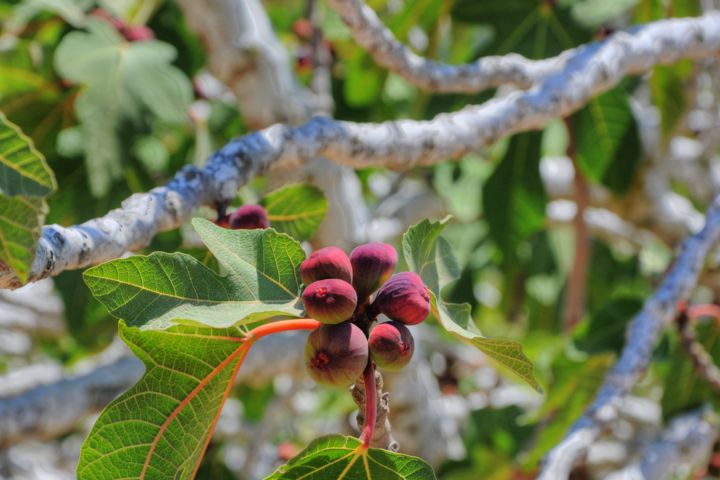 Yechiel is seen below near one of the water cisterns: 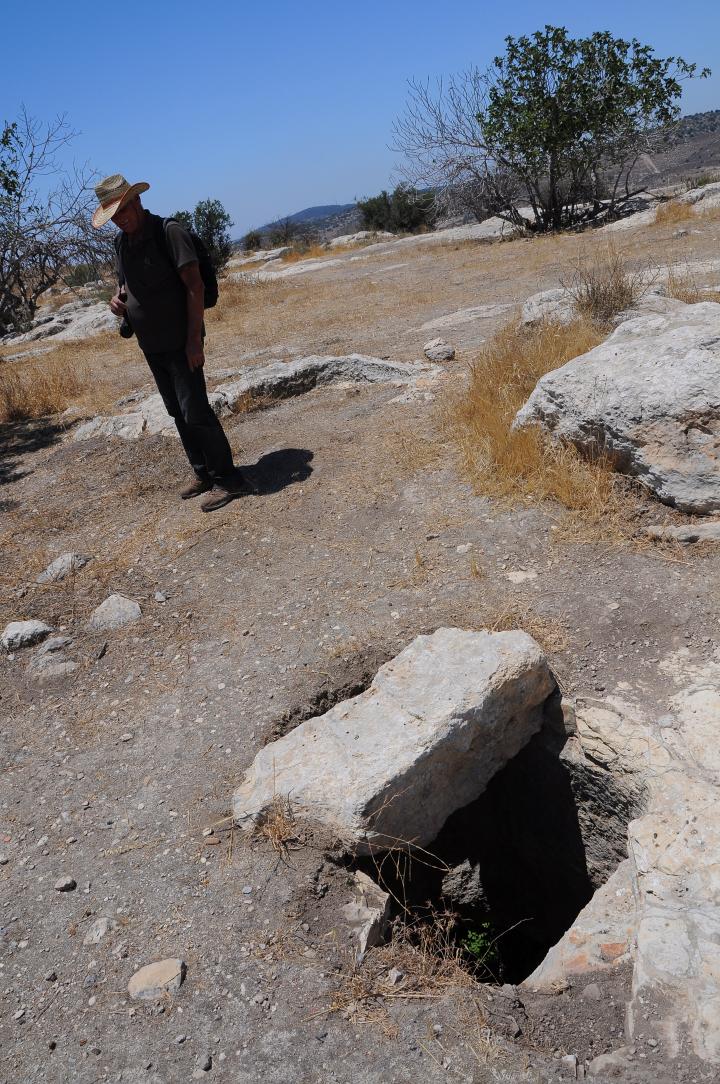 A long wall stretches along the southern side of the hill: 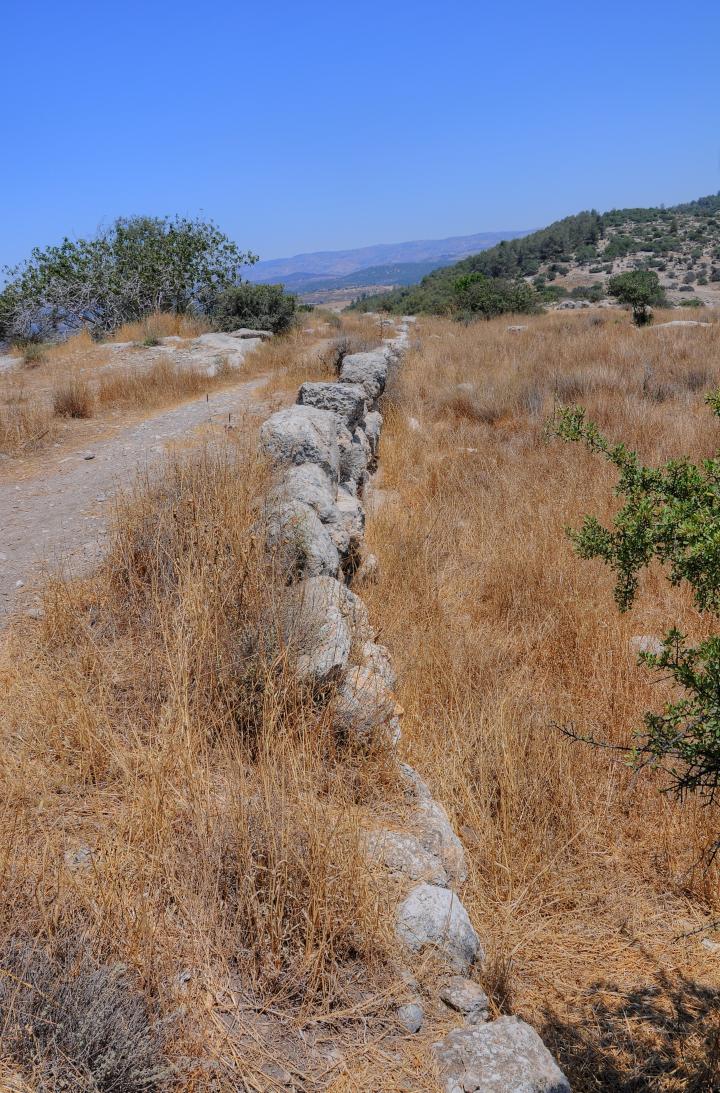 The next picture shows a view from the top of the eastern hill: 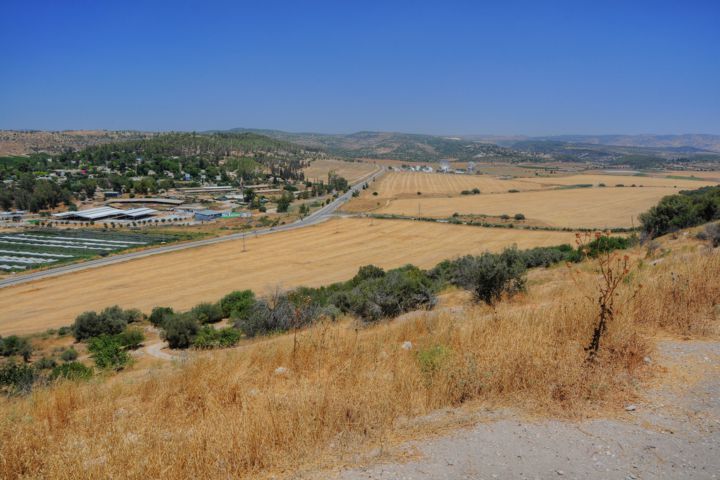 Panoramic views, as seen from Tell Sochoh, are shown in the following pictures. If you press on any one picture, a panoramic viewer will pop up. Using this flash-based panoramic viewer,  you can move around and zoom in and out, and view the site in the amazing full screen mode (like you are really there).

To open the viewer, simply click on one of the photos below. Note that it may take minutes to upload, but then its worth the waiting time.

The location of these panoramic views, and their viewing zones, is shown in the following map as a reference: 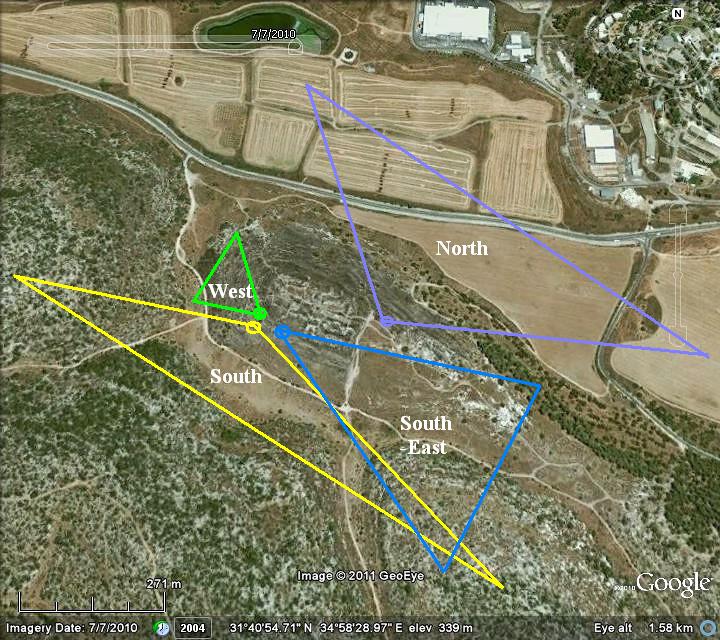 Many seals were found in Israel imprinted on jars with the Hebrew letters  LMLK ( "L'melekh"), meaning "belonging to the king". Some of these royal seals bear the name "Sochoh" on the bottom (4 Hebrew letters Shin-Vav-Kaf-Hey). This name may refer to the Sochoh in the valley of Elah, or to another one of the cities named Sochoh, or they "may have been used as literal words of devotion" (as per G.M. Grena of LMLK.com who helped us with this section, and provided the following stick figures and photos).

There are 4 types of Sochoh seals, 3 are shown below: