Sarid was one of Zebulun cities, and located in the Jezreel valley.  Near the Tel (in Arabic, Shadud, which preserved the name) is the Kibbutz by the same name, Sarid.

Joshua 19: 10: "And the third lot came up for the children of Zebulun according to their families; and the border of their inheritance was unto Sarid."

Sarid is a Biblical city in the Jezreel valley.  It was mentioned in the bible as belonging to the area of Zebulun. Today its ruins are located near Kibbutz Sarid.

The Tel (Biblical mound) can be seen while driving from Nahalal towards Afula, near the junction of Migdal Haemek and Kefar Baruch.  The name of the Tell in Arabic is "Sadud" or "Shadud", which preserved the ancient name and is one of the keys for the site's identification.

The aerial map of the area shows the site from the east side, indicating the points of interest in the area.  Pointing on  purple points will automatically scroll  to the relevant photo, text or web page. 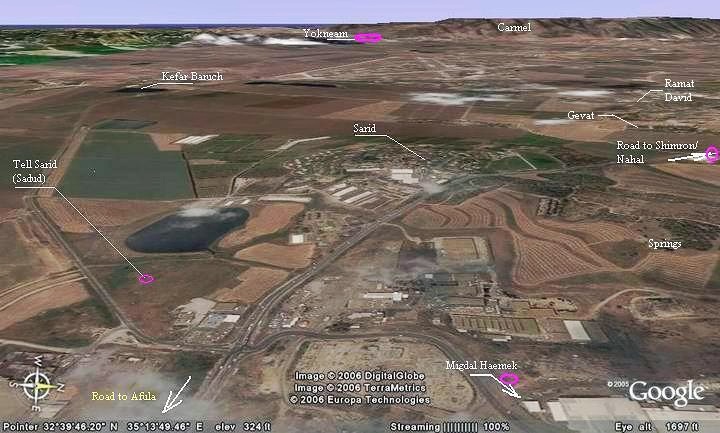 The site of Tell Sarid was inhabited for 2000 years: starting from the Bronze age, and continued to be in use throughout the Israelite/Iron Age, up to the Hellenistic period (2-3 C BC).

The city was strategically located near the ancient road that was adjacent to the site, which connected  Shimron to Mount Tabor, Afula, Megiddo and other east Galilee cities. 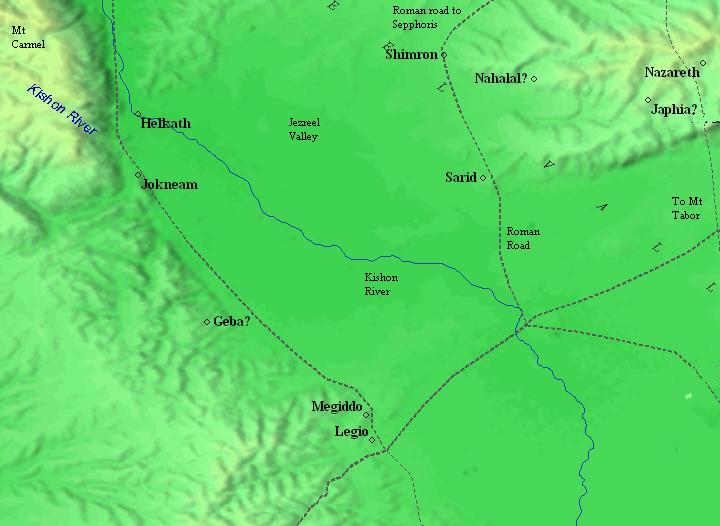 Map of the area around Sarid -From Canaanite/Israelite periods to the Roman period  - 15C BC through 3 C AD  (based on Bible Mapper 3.0)

In the Roman times this site was already deserted, but the Roman road passed nearby. This road connected Sepphoris to Legio (Megiddo), and from there to the south of Israel and Egypt. Since Jesus traveled several times from Nazareth to Judea and Jerusalem and back, he must have passed this site by this road.

In 1868 a  German Christian sect tried to settle near the Tell, near the ruins of Khirbet Huneifis (Akhnifs, or Ikhneifis). After a short time they encountered hardships, became sick and died from Malaria, and decided to evacuate the site to other places.

A kibbutz by the same name, Sarid, was established  in 1926 in the area west to the Tel.

This aerial view of Tel Sarid was captured in September 2015 from a drone on the south west side of the mound. The south industrial area of Migdal Haemek is on the left background, to the north of the junction and the gas station. In the center of the far background is Mt Precipice (Nazareth)  and the round hill of Mt Tabor. On the right is the valley of Yizreel. 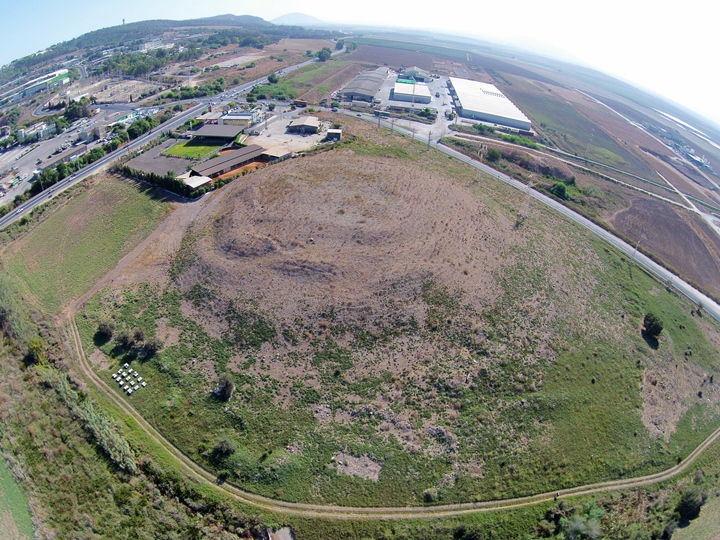 This is the view from the south, close to the road from Migdal Haemek to Kefar Baruch. 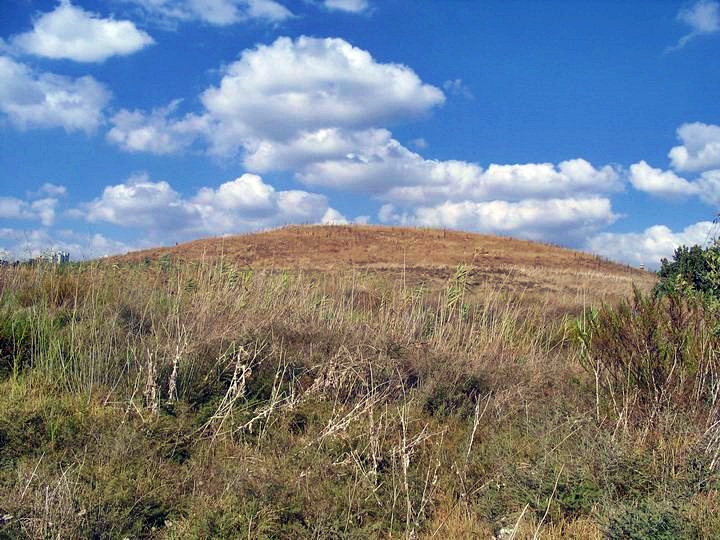 A view from the valley below the Tell, a small creek that used to flow water from the springs nearby (Ein Haklil) into Lake Baruch and Kishon river. It was one of the sources of water for the Tell. Another source of water was Sadud springs, on the south-eastern side of the hill (across the road). 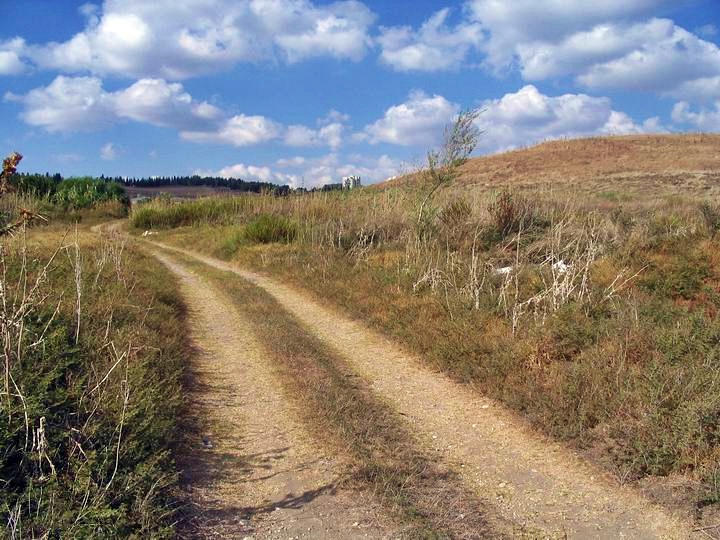 In April 2014 the IAA announced the discovery of rare artifacts during a salvage excavation at the foot of Tel Sarid (Tell Shadud). The excavation was conducted prior to an installation of a gas pipe to the nearby Industrial park of Ramat Gabriel, Migdal Ha-Emek.

The photos of this section are the courtesy of the IAA - Israel Antiquities Authority. The excavation was directed by Dr. Edwin van den Brink, Dan Kirzner and Dr. Ron Be’eri. 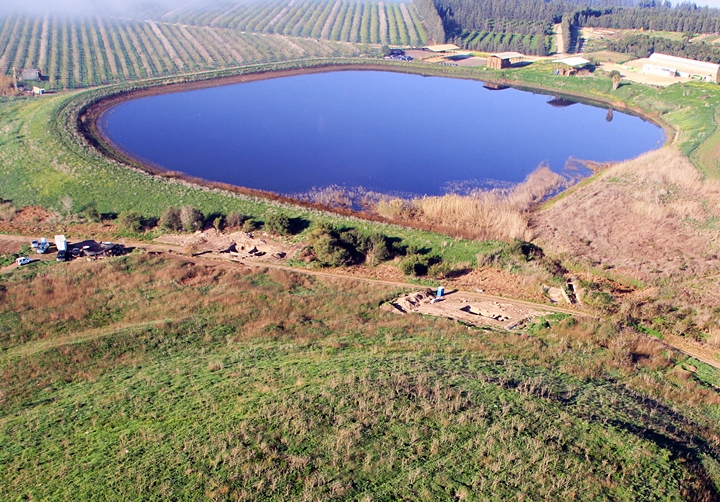 A 3,300 year old coffin was one of the exciting findings. This clay cylindrical coffin was probably the burial place of a wealthy Canaanite, possibly an official of the Egyptian army. The burial site is dated to the 14th or 13th Century BC (Late Bronze age). A skeleton of an adult was found inside the coffin. 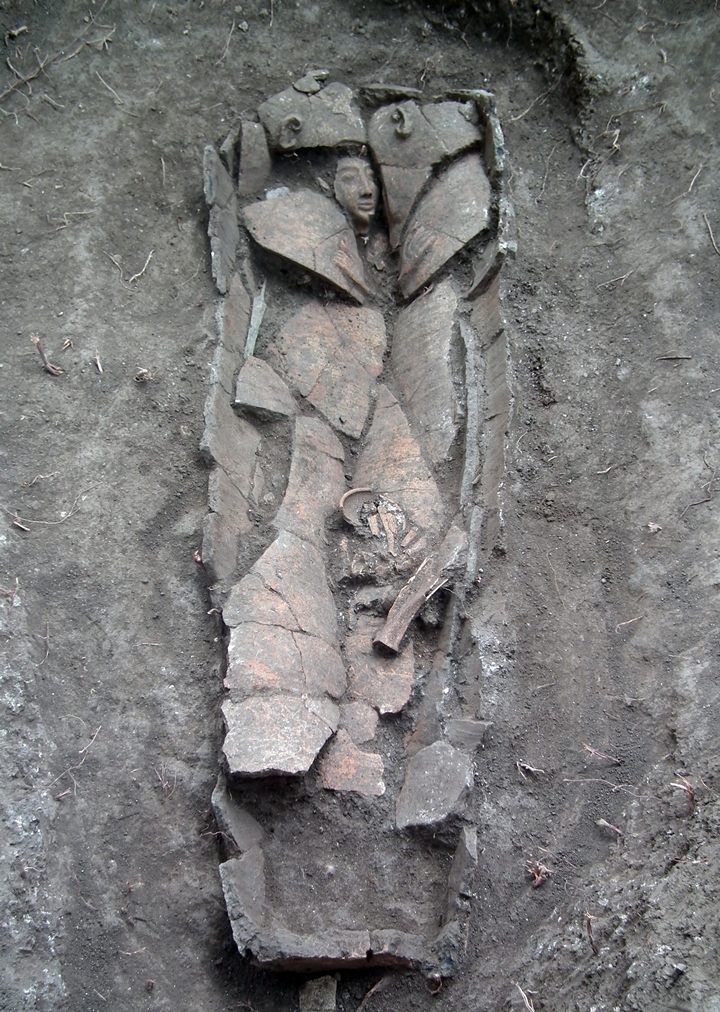 A detail of the head of the coffin, with a cover bearing an image,  is seen below. This burial method is termed "anthropoid coffin", which is an Egyptian burial practice commonly used in the 14th to the 10th Century BC. 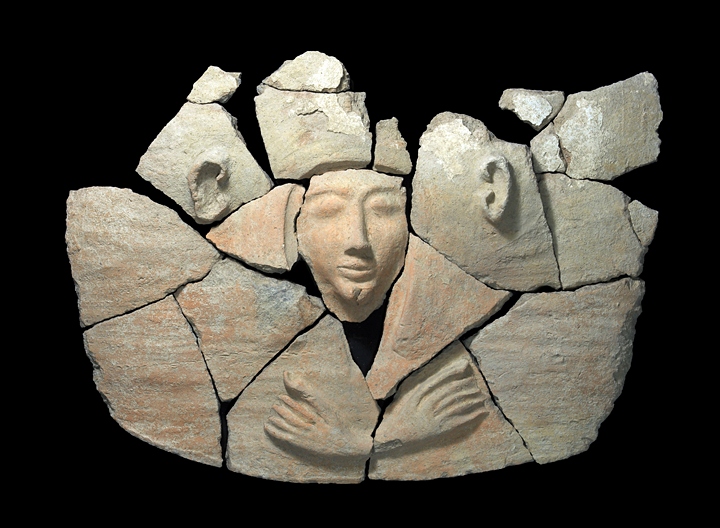 Inside the coffin was a gold ring, bearing the name of the Egyptian Pharaoh Seti I (~1294-1279 BC), son of Ramses I and father of Ramses II (commonly identified as the Pharaoh of the Exodus). 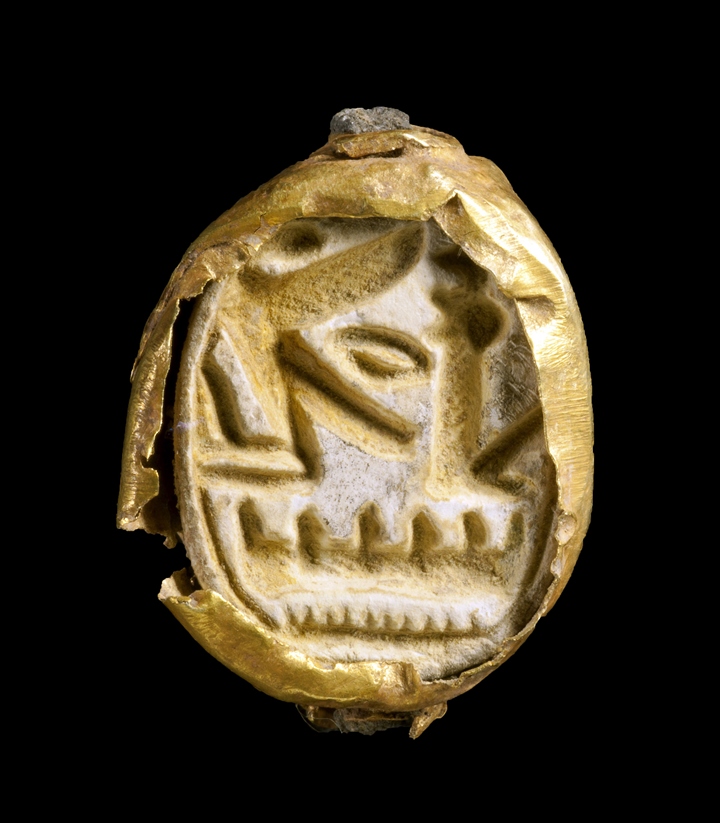 The coffin was surrounded by a variety of pottery, a bronze bowl and dagger (seen below), to be used in the afterlife of the dead.

Additional graves of two men and two women were found near the coffin.

This discovery attests to the Egyptian control of the area during the Late bronze Age.

This text described the borders of the Tribe of Zebulun (Zevulun), where the territory is referenced to Sarid (the border goes west and east to the city):

"And the third lot came up for the children of Zebulun according to their families; and the border of their inheritance was unto Sarid. And their border went up westward, even to Maralah, and reached to Dabbesheth; and it reached to the brook that is before Jokneam. And it turned from Sarid eastward toward the sunrising unto the border of Chisloth-tabor; ...".

In this text the name "Yessded", breaking the clods of the ground,  which may be the source of the name (see also below in the Etymology).

" Doth the plowman plow all day to sow? doth he open and break the clods of his ground?"

Another text uses the word "Yesadad":

"Canst thou bind the unicorn with his band in the furrow? or will he harrow the valleys after thee?"

Another text using the word "Yesaded":

"And Ephraim is as an heifer that is taught, and loveth to tread out the corn; but I passed over upon her fair neck: I will make Ephraim to ride; Judah shall plow, and Jacob shall break his clods".