A grand Mausoleum dated to the Hellenistic and Roman periods, is one of the oldest standing structures in Israel.

A Mausoleum, dated to the Hellenistic and Roman periods, is one of the oldest standing structures in Israel. The structure  is situated close to the Via Maris cross road, near the modern settlement of El'ad and Moshav Mazor.  The Mausoleum, a monumental structure enclosing a tomb, later commemorated John the Baptist (and named by locals as Neby Yahyah - St. John).

The site is located at a height of 80M, near the ancient route of Via Maris south of the Afek pass. An aerial map of the area around the site is shown here, marked with the major points of interest. The site is located close to Road #6 (Israel's cross highway), but the access is thru road #444 south of Elad.

You can point on the yellow squares to navigate to the selected place within this page or other web pages. 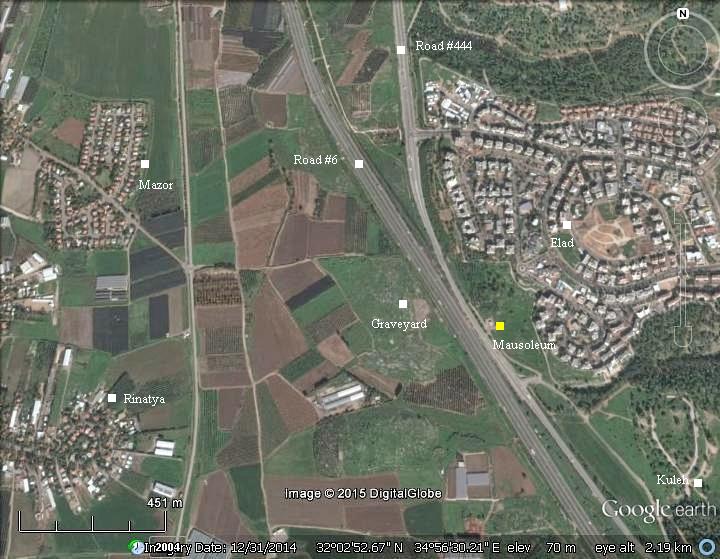 The structure was built during the Hellenistic period. It was later modified during the Roman period (at about 300 AD), as its architecture follows similar structures of the late Roman period that are found in Syria.

The tradition of a monument commemorating John the Baptist may have started in the Byzantine period. Later, the Arabs continued to dedicate the structure as a shrine to St. John, as he is regarded in the Quran as a prophet. They named it Makam en Neby Yahyah, or the "shrine of John the Baptist".

A section of the survey's map, part of Sheet 14, is shown above. The site is to the left of the El Mezeirah village (the meaning of the Arabic name is "the sown land"). The report also includes a short description of the village at that time:      " El Mezeirah - A mud village on the edge of the hills, near [Kuleh]".

This quadcopter aerial photo shows a view of the Mausoleum from the north east side. 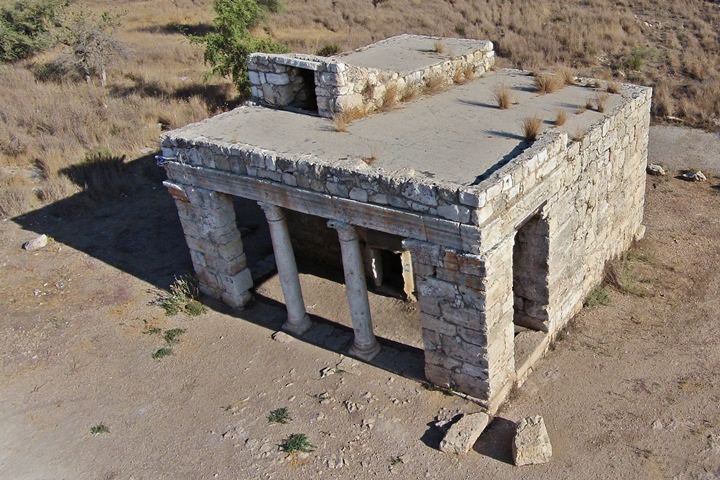 The mausoleum consists of a portico (porch leading to the entrance of a building) and a square building. The building behind the portico includes two chambers - the main hall in the western (right) chamber  and a smaller chamber on the east (left) side. A staircase on the eastern chamber leads up to the roof of the building. 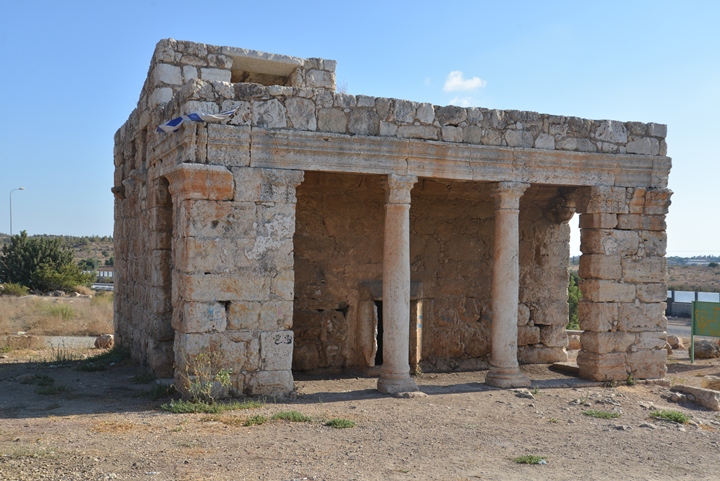 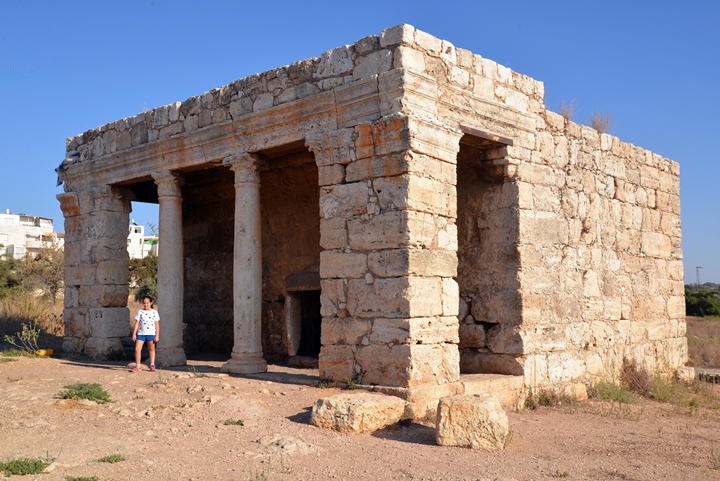 The portico has two pillars and two piers, with Corinthian capitals supporting a cornice. The front is 4.8m high. 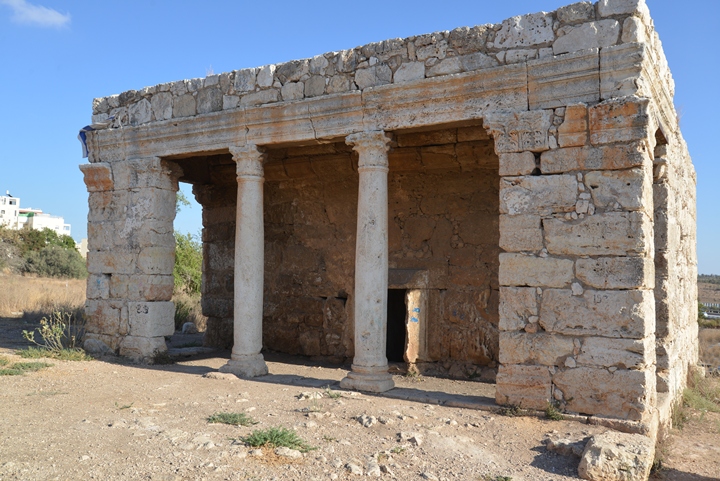 On the eastern side (right side of the photo below) and southern side (left side) are windows, located close to the roof. 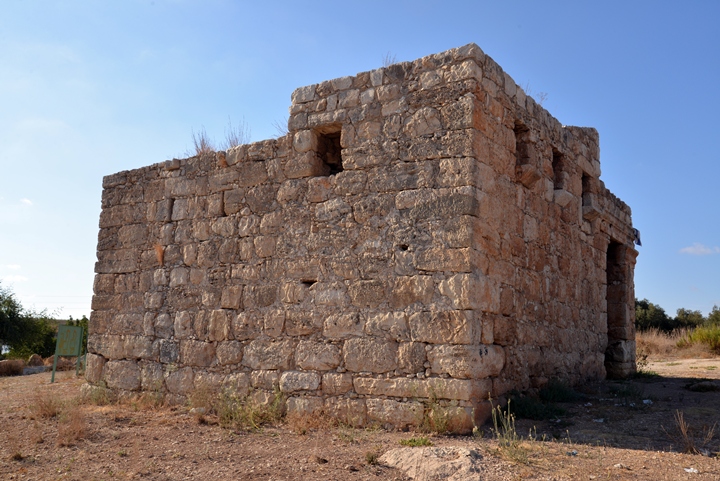 Notice the flat stones in front of the eastern windows. 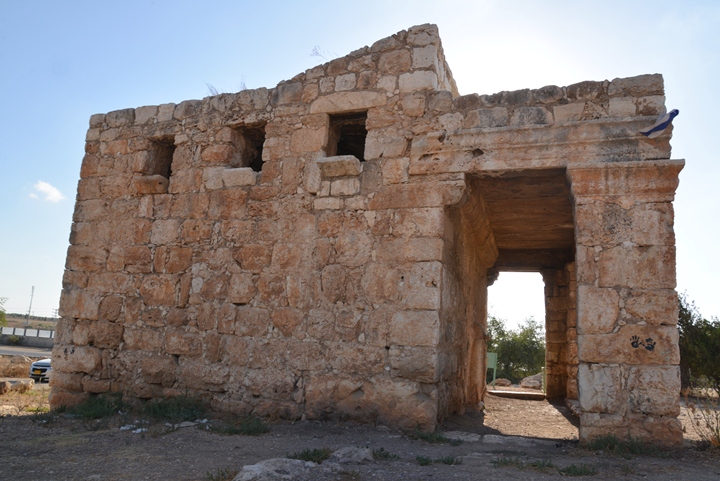 A narrow (1m) opening is located under the portico on the northern wall. 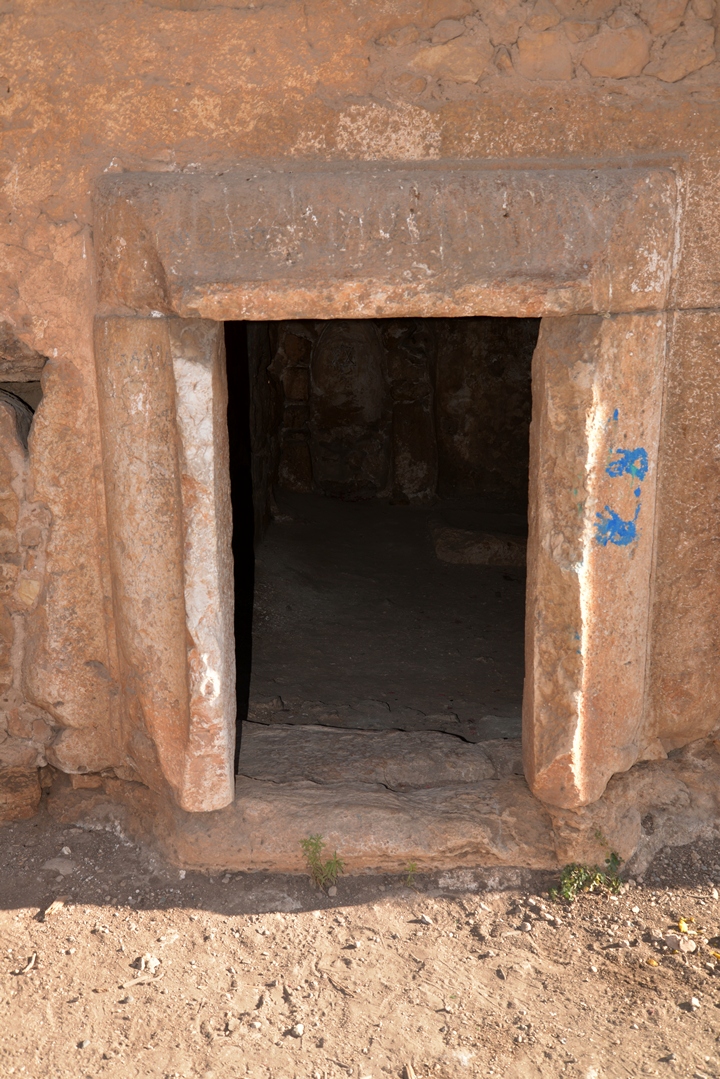 A view of the northern wall is seen below from the inside. The entrance opens up to the western chamber of the structure, which is the main hall. A heavy stone door once stood there to block the entry. 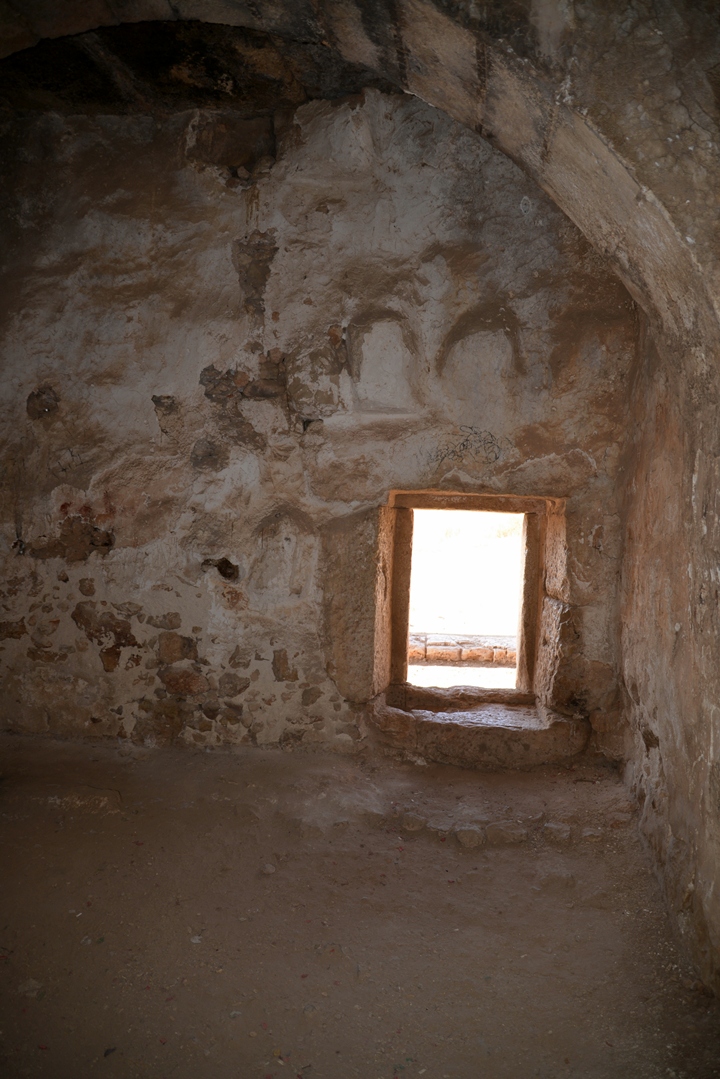 The southern side of the main hall is seen in the following photo. In the center is a base of a sarcophagus (stone coffin) which is a cenotaph (an empty tomb erected in honor of John the Baptist - Neby Yahyah). Another smaller perpendicular base of another sarcophagus may have been a coffin of a child. 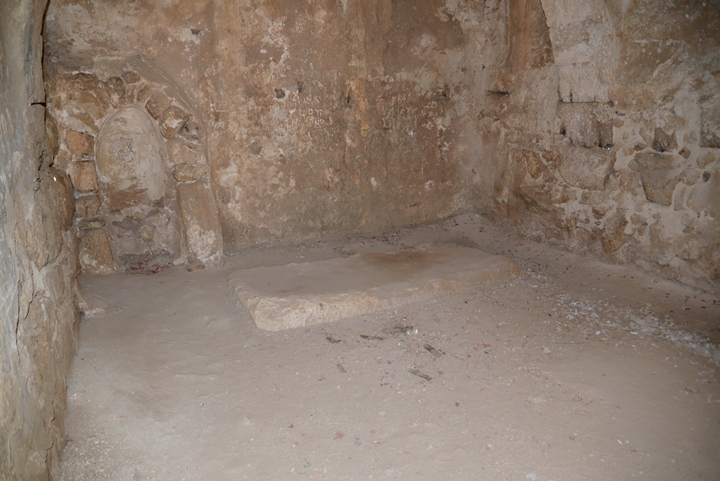 The top part of the southern wall is below. An arch holds the roof which is composed of long stone slabs. The PEF report described it:

"The roof of the western chamber is supported on two semicircular ribs of 19 voussoirs each. The key-stones are the smallest, the haunch-stones the largest, as in Byzantine buildings. On these ribs, 15 feet span, and about 2 feet wide, the flat roofing slabs are laid in three rows of six each, north and south." 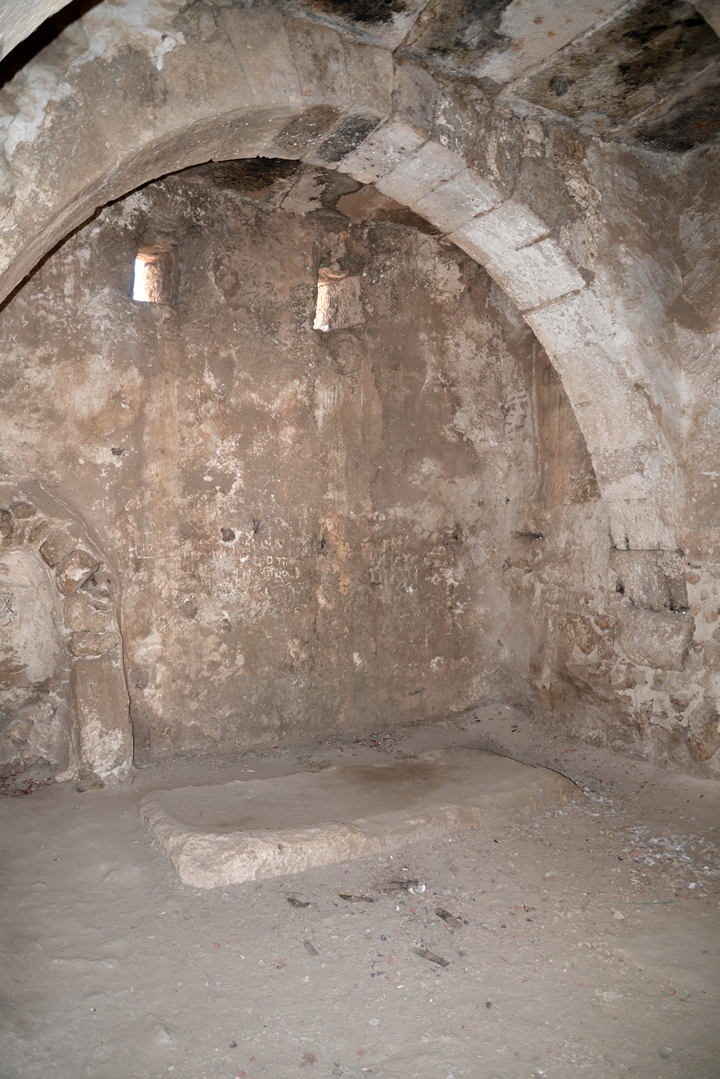 In the photo below Yarden poses in front of the southern wall. She really enjoyed visiting the site and nearby ruins of the Crusader fortress of Kuleh, and especially excited to fly the drone around the structure. 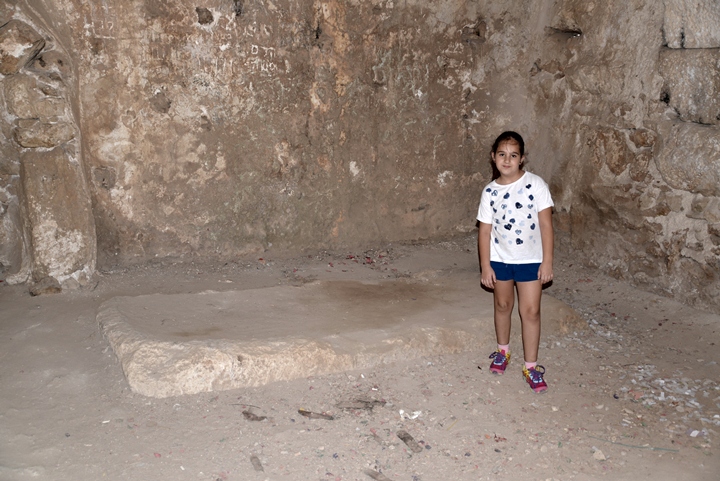 A mihrab (Muslim prayer niche) is located on the eastern side of the south wall. The Muslim prayer niches are on south walls since they are oriented toward Mecca. The niche was added in a later period, covered with red plaster. It converted the Roman structure to a shrine dedicated to John the Baptist (called Neby Yahyah in Arabic). John, as other Biblical figures, are regarded as a prophet in the Muslim Quran.

A graffiti of a Jewish Magen David was added on the cavity of the mihrab, an ugly act that is regrettable. 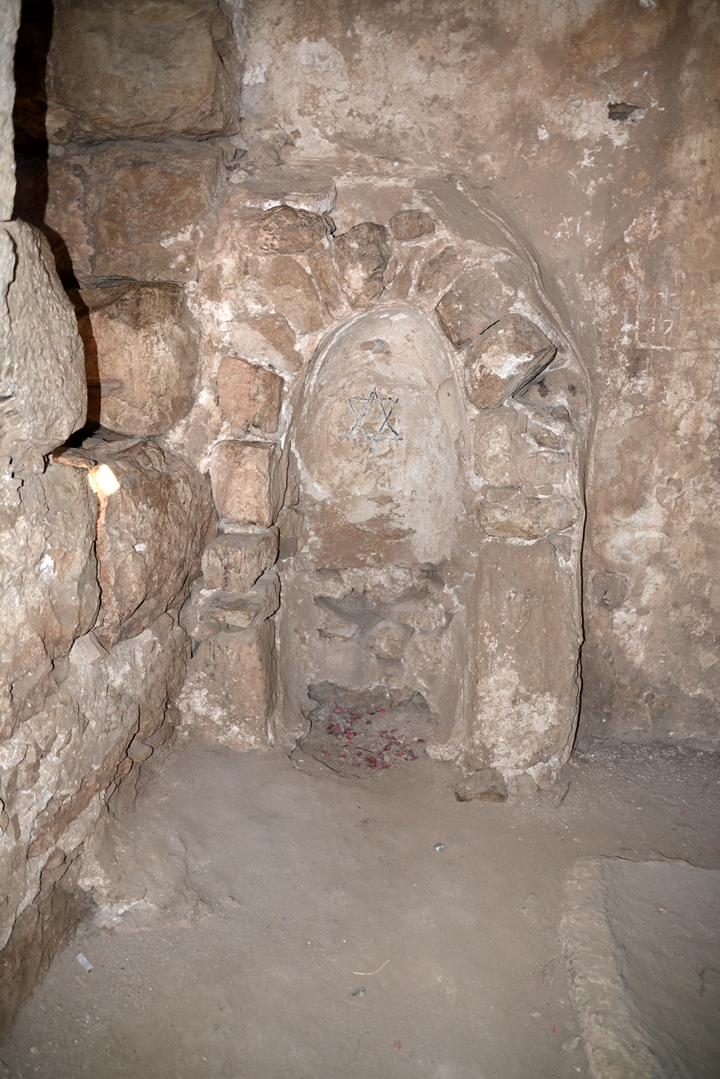 A hole on the western wall is a place where ritual candles are placed and lit. It seems like some people still come here to light candles and come to pray or request favors. 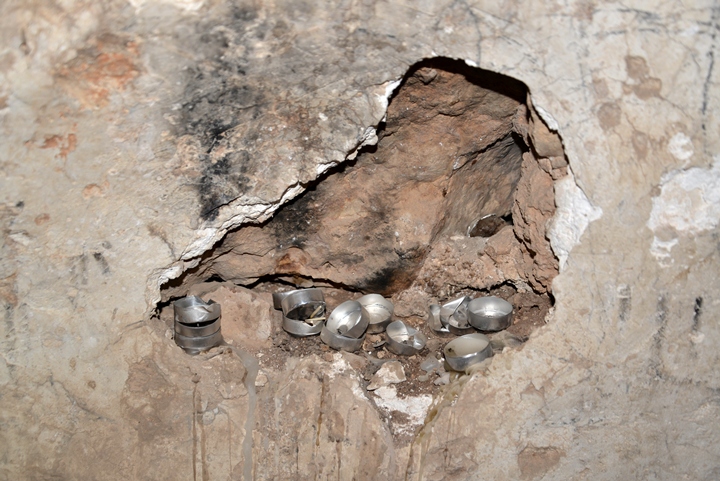 A high opening on the eastern wall leads to a second chamber. 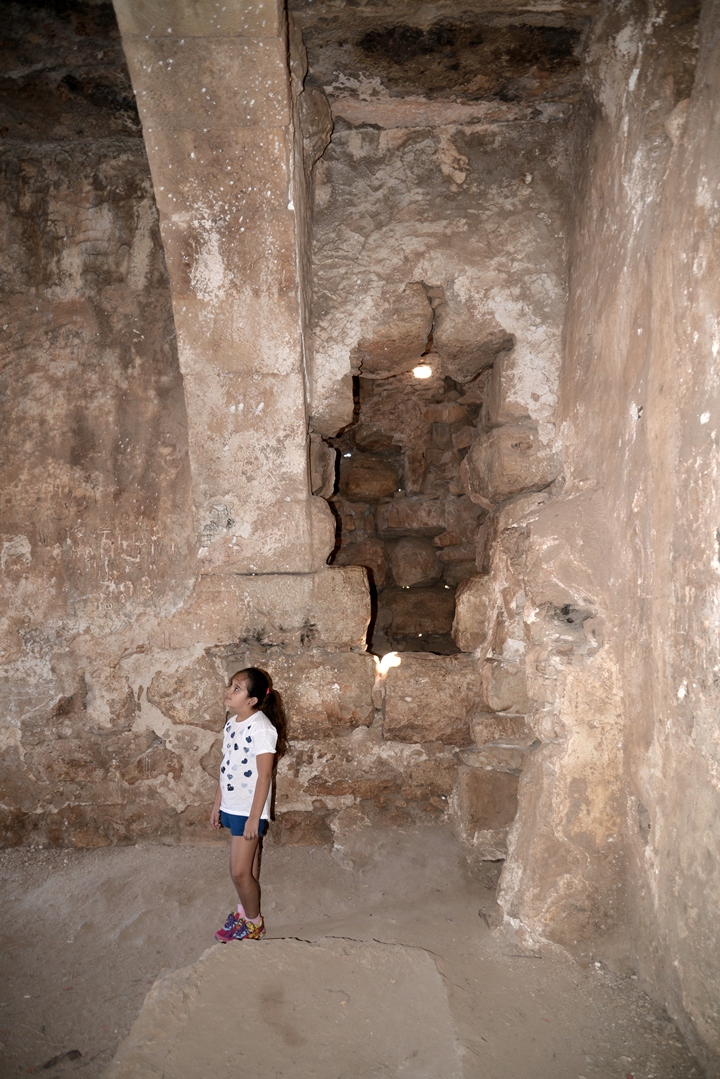 Inside the eastern chamber is a "columbarium" with several dozen  square holes. The holes were used to store vases (urns) with the cremated remains of the diseased, probably the ashes of servants of the Mausoleum's owner.

The word 'columbarium' is based on the Latin word columba ('pigeon'), as it was originally used for a place to house doves and pigeons.  Since these storage places looked like the pigeon holes, these type of burial sites were also named columbarium. 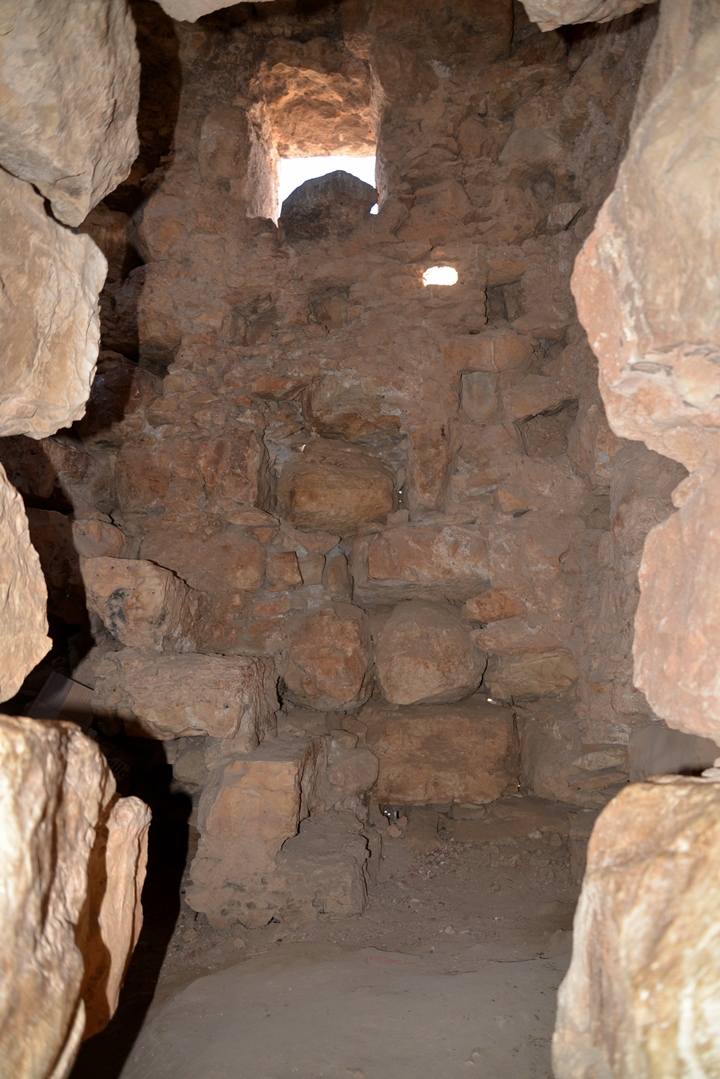 Stairs lead up along the wall to the roof. The PEF report wrote about this:

"A staircase leads up the east wall of the east chamber inside ; it consists of flat slabs built into the wall, of which seven remain. They lead up a height of 10 feet 10 inches to a window, of which there are three on the east wall of different heights. The rest of the staircase was, perhaps, outside, but  there is also an opening to the roof on the north". 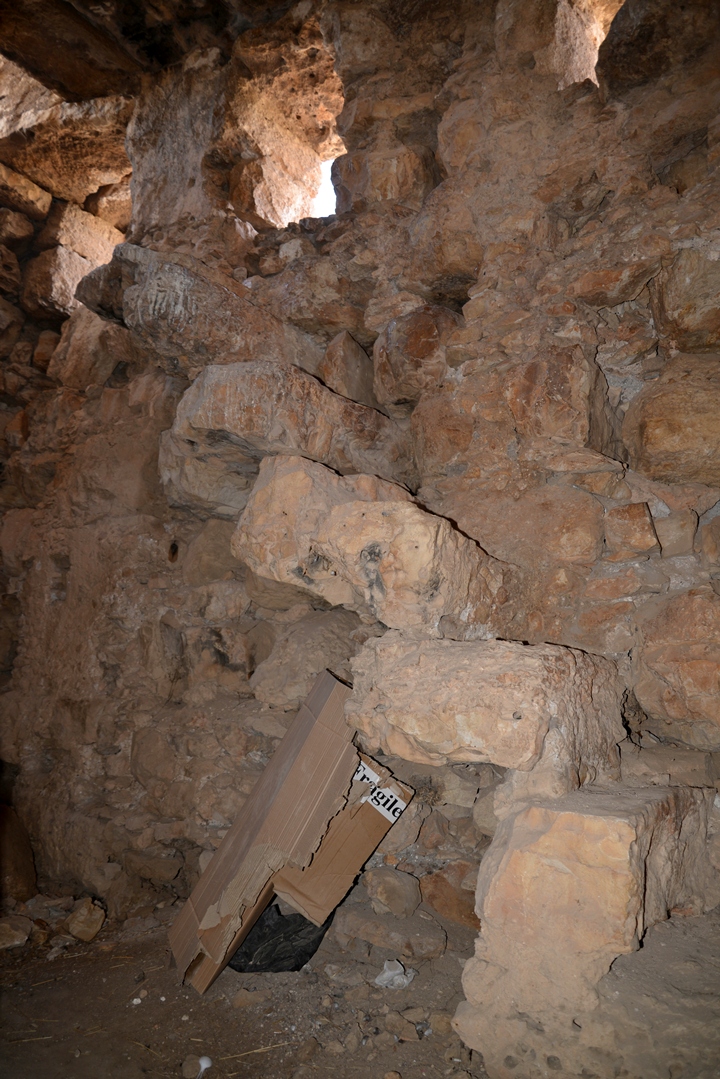 The stairway leads up to the roof of the structure, through an inclined roof.  The PEF report speculated that a second story was located above the structure.

(e) Around the structure:

Around the structure, covering an area of 2 Dunam, are many burial caves and cisterns. This one is on the west side, close to the structure: 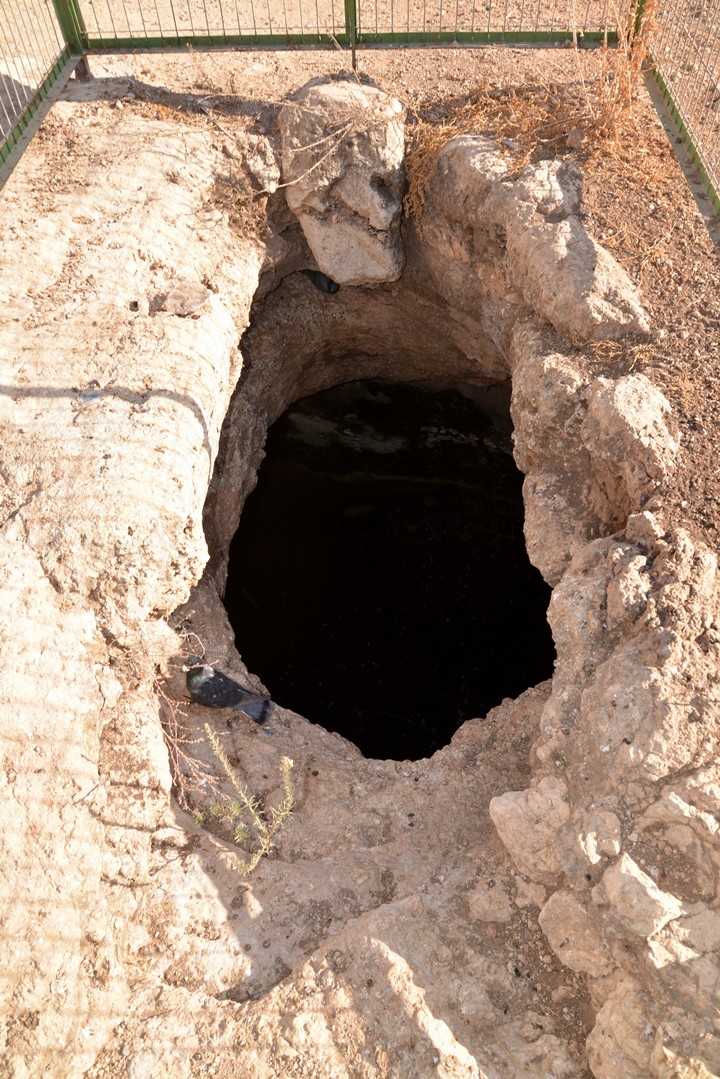 Another 4.2m by 4.2m square plastered cistern is located 16m away, on the north side. It is 3.6m deep, and was covered by stone slabs.  The water was drawn from a shaft 4.5m to the south of the reservoir, that was connected to it by a tunnel. 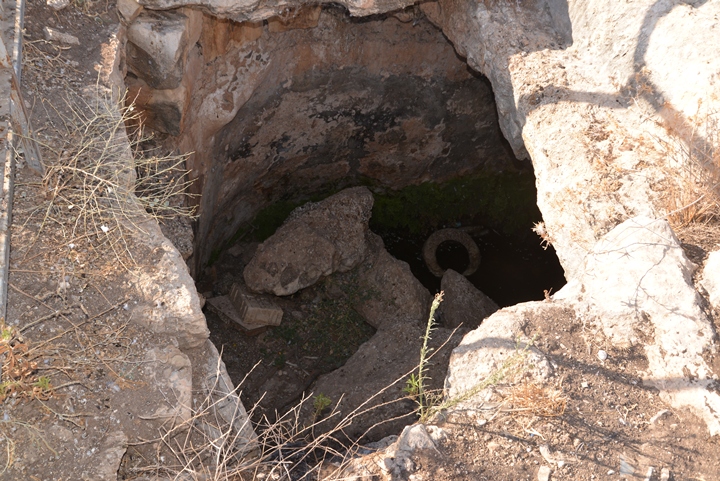 Near the structure we noticed a cluster of Hazav (squill, or: urginea maritima) flowers. They flower at the end of the summer (September/October), signaling the beginning of the Autumn season. Their bulbs were also used to mark the edge of a field or lot, an ancient practice that is widespread in the Holy Land. A legend even held that Joshua used the squill bulbs  to mark the borders between the tribes. 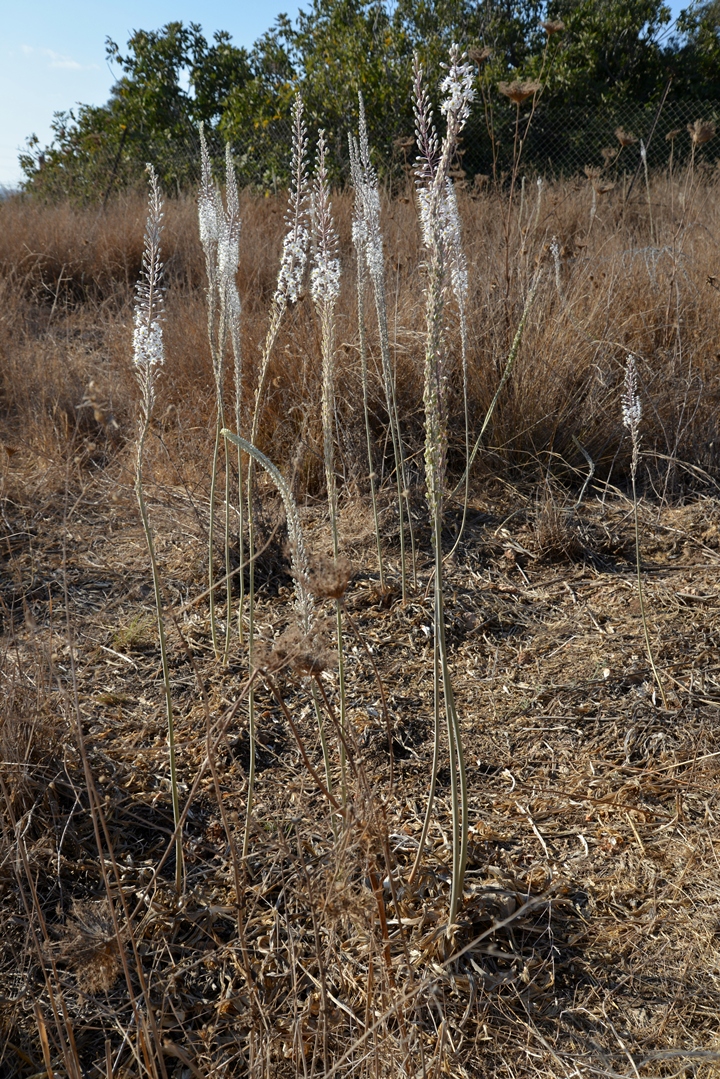 BibleWalks.com - touring the Land with the Bible in hand