Khirbet Manot is the ruins of a Roman and Crusaders period village located on the west end of the Kziv creek in the upper Galilee. The village is located on two areas on the western hillside: an upper side, where the Crusaders fortified farm complex used to be, and a lower side where the sugar processing factory was located.

An ancient stone quarry is located on the side of the road that continues along the creek to New Avdon. Among its walls are Roman/Byzantine rock-cut tombs.

An aerial map of Khirbet Manot and the area around it is shown below, indicating the major points of interest. Point & click on the purple points to navigate to the selected point. 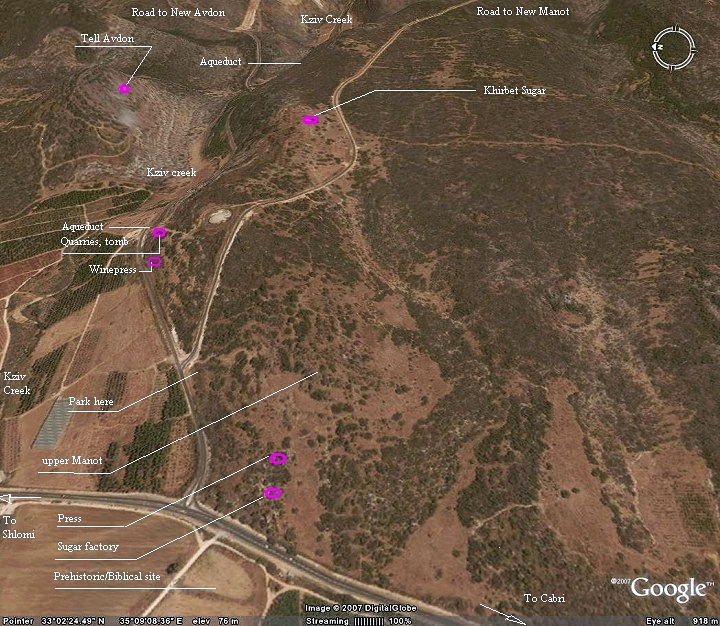 Along the Kziv creek, about 1KM east, are many findings starting from from the Neolithic period (83C BC- 45C BC).

At Abu edh Dhahab, 200M to the west of lower Manot site, are traces of  a settlement from the Early Bronze to Iron and Persian periods (~30c BC thru 4 C BC).

The ancient site relocated to the new hillside villages (Manot and Suggar)  during or after the Hellenistic period. Today the Biblical site is completely razed and only pottery fragments scattered on the surface can attest to the existence of the earlier site.

The village was established at the Roman period. There are few remains from that period and the Byzantine period located mainly on the lower side of the hill.

Other Roman/Byzantine villages are located nearby: Khirbet Suggar (800M east), Khirbet Hamsin (1KM north-west), Khirbet Emed (1.2KM west) and Khirbet Shakof (2KM west). This density of villages shows that the area was heavily populated during this period - due to the fertile lands and supply of water along the creek, the strategic location near a port and trade road, and the prosperity during these periods.

The Crusaders established one of their important fortified farms in the area, calling it Manueth. The lands of the farm were leased in 1169 and the houses were built on the higher foothills - "upper" Manot.

In the nearby valley of Kziv the farmers grew sugar canes. The canes require plenty of water which the creek provided. They also built a large sugar processing factory on the lower side of the farm, close to the modern road.  The sugar production was one of the Crusaders industries, and other sites in the Holy Land had similar factories, such as Gilgal in the Sharon.

Manueth's military purpose was the protection of the entrance to the creek, where a road led to the Montfort castle and farm. The farm was part of the Crusaders alerting network: it kept a visible communication line with other posts - using fire signals at night and smoke signals at bright days, alerting each other on approaching enemies. On the east side it communicated with Montfort (7KM), via relay stations along the creek (such as Avdon). On the west side it had a direct visible line to the coastal Castle Imbert (Achziv, 5KM).

In 1187 the farm was taken for a short time by Saladin's forces, but returned back to the Crusaders shortly after. In 1212 the farm was sold by its owner to the Templars order, who held it until 1260.

The Mamlukes, under Baybars, captured the village in 1260 and held a headquarter in the farm. It was later given to the order of Hospitalars, who leased it to the knights of Montfort. The sugar factory continued to function several centuries later, being a lucrative source of income.

The site is in ruins today, but there are good trails to ease the passage through the bushes. There are plans to reconstruct the sugar factory and the area around it.

A new settlement, Moshav Manot, was established in 1980 and named after Khirbet Manot.

This aerial view shows the site from the west side. The ruins of the village spread over the whole hill, and few of its structures can be seen among the bushes. The Crusader sugar factory is located close to the road, while the Roman/Byzantine period ruins are located on the foothills behind it. 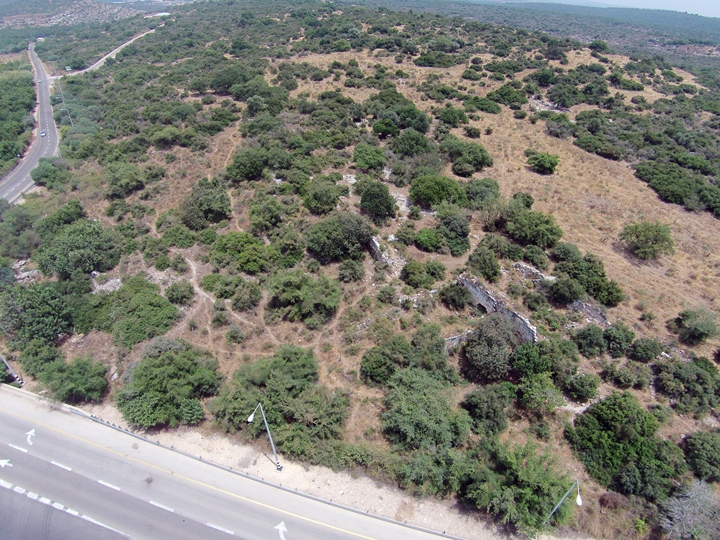 A flight over the site, with a 360 degrees view around it, can be seen in this drone video:

The Crusaders manufactured sugar in a building and installations that are located close to the road on the west side. Its ruins are seen in this aerial view.

A ground view of a section of the factory is in the following photo. The long (35 x 8M) hall behind the high walls - about 10M above the original surface -  contained a number of furnaces that boiled the water together with the sugar cane juice.

The sugar canes  were grown in the valley of the Kziv creek and brought to the factory. Then they were chopped, smashed, boiled, then poured into ceramic cones. During the cooling the juice would crystallize into sugar, and then packaged and sold. 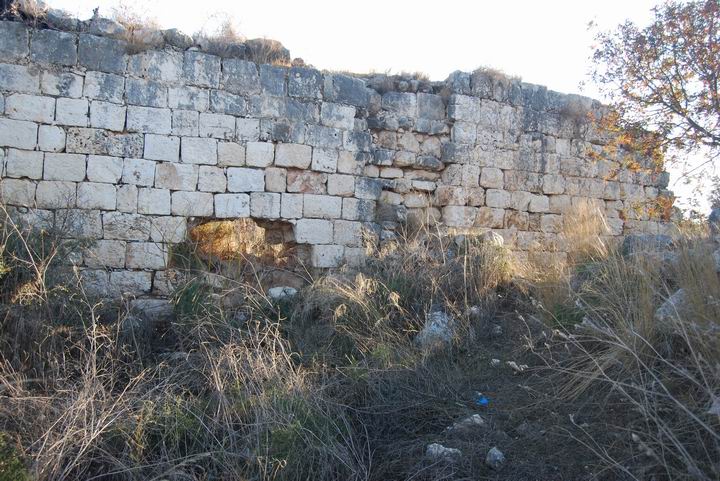 This is one of the arches that lead to a furnace, located on the north side. It was used to keep the fire boiling the water. 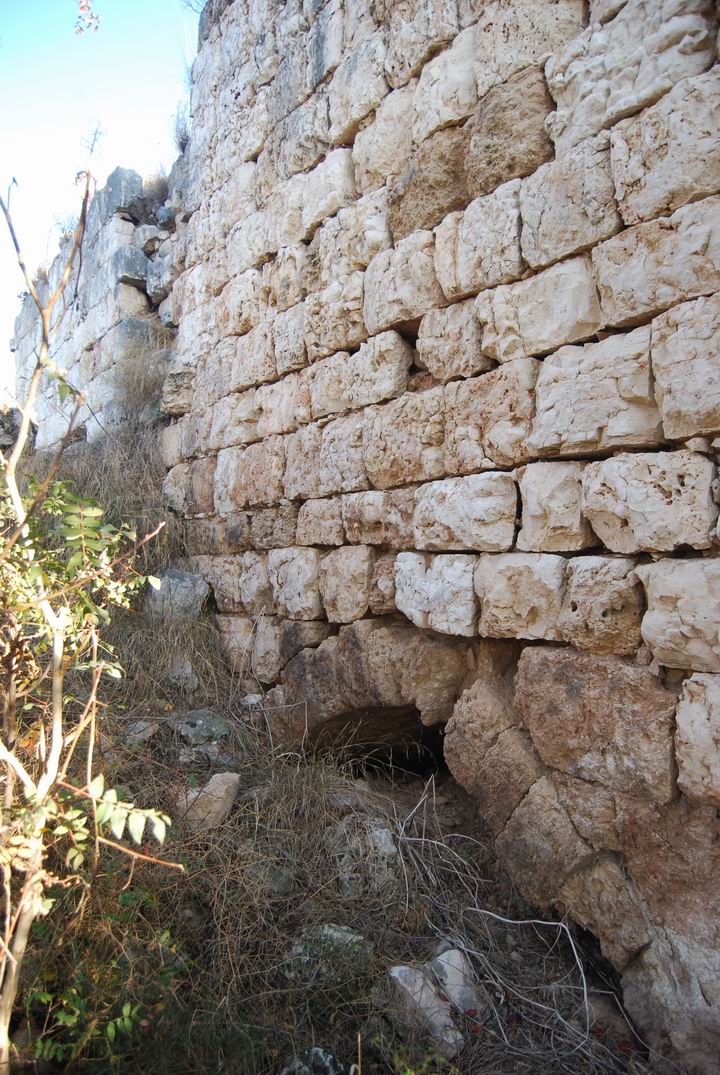 This is a view from the west, where the furnaces were located. 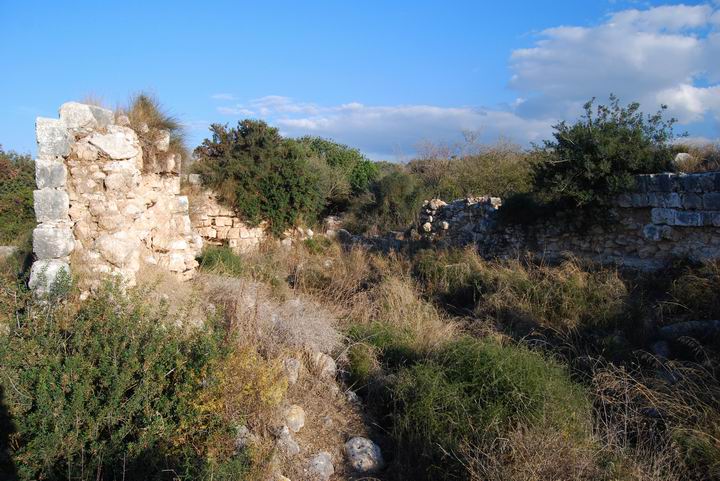 A view of the southern wall. Before the wall is an underground cellar. 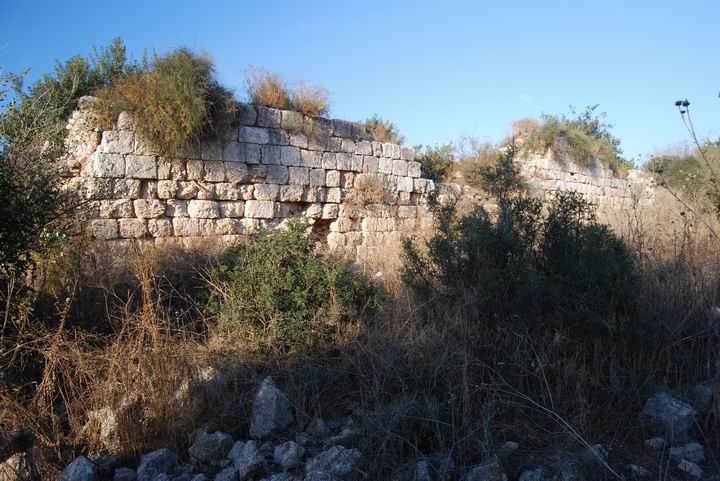 The water used in the sugar production process was fetched from an aqueduct that entered on the side of the north wall - which  extends 5M from the main hall. The photo below shows the base of the aqueduct close to its entrance to the north wall. 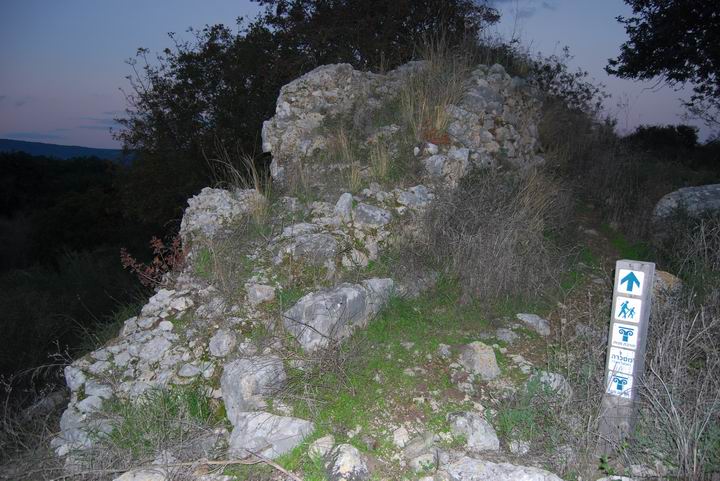 Part of the sugar factory process was a secondary crushing installation, where the crushed canes were brought for further extraction of the juice. It included a square shallow pool (7cm deep, 0.9 x 1M) and a base for the lever and screw behind the pool. The pool held the extracted juice after it was pressed out of the crushed cranes. 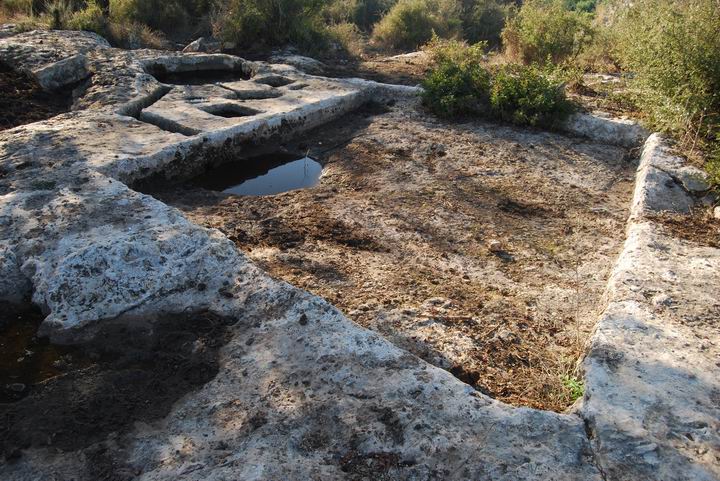 At the side of the pool is the central press-bed, which was used to crush the sugar canes and extract their juice. The installation was based on a lever and screw direct pressure device. The base of the device, called the Manot-type press,  was cut into the rock. The central press base leads via a channel (10cm wide ) to a collecting vat (60cm diameter). Two square holes (25cm wide, 45cm deep) are cut on each side and were bases for the wooden beams. 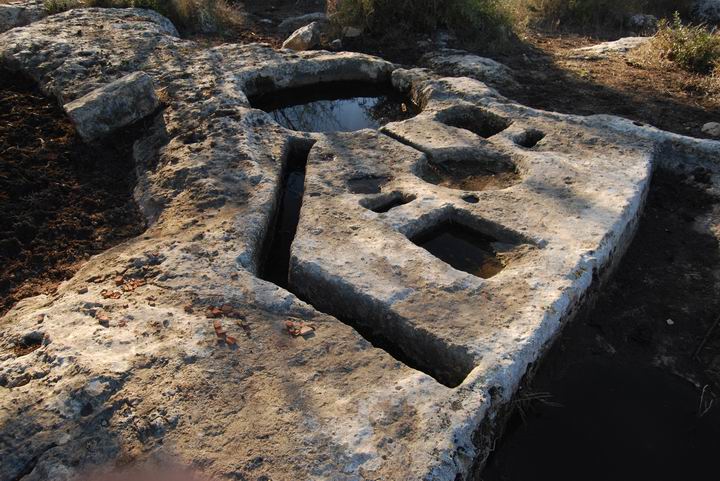 Nearby are remains of an ancient stone quarry, as seen in the foreground of the photo below. 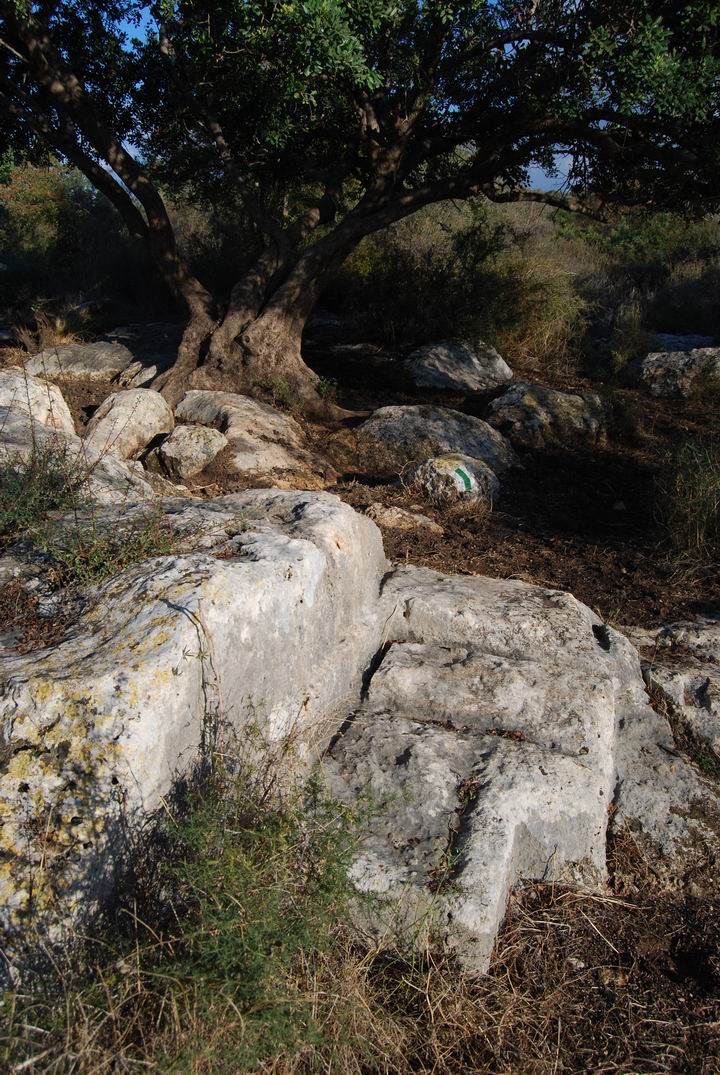 Most of the site is hidden in a dense bush area.

North-east to lower Manot, along the south side of the Kziv creek, is an ancient stone quarry. This may have been one of the occupations of the residents of Manot. In this quarry there are agriculture installations cut into the rock, such as a winepress. 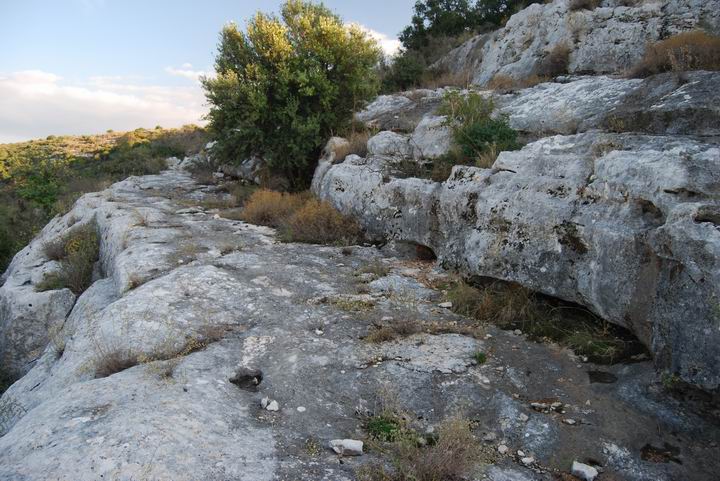 There are also rock-hewn tombs located in some parts of the quarry, some of them yet unexcavated - such as these ones seen on the right side.

One of the tombs are seen in the photo below. It has a square entrance with a arched recess around it. 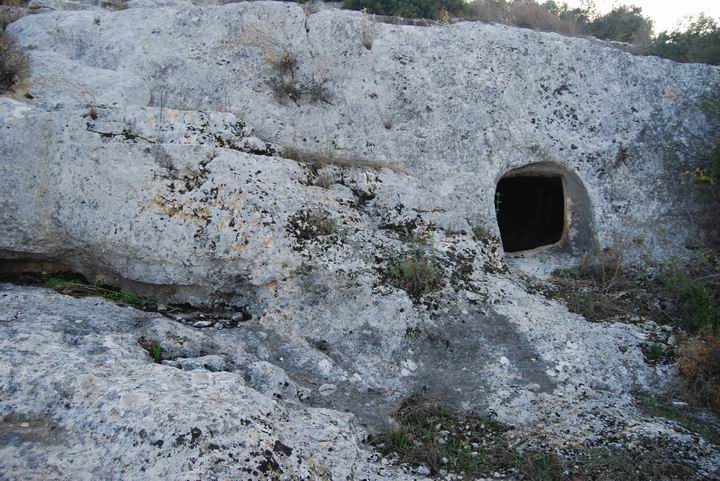 Three steps lead into the square burial chamber.  Inside are 5 burial cells. 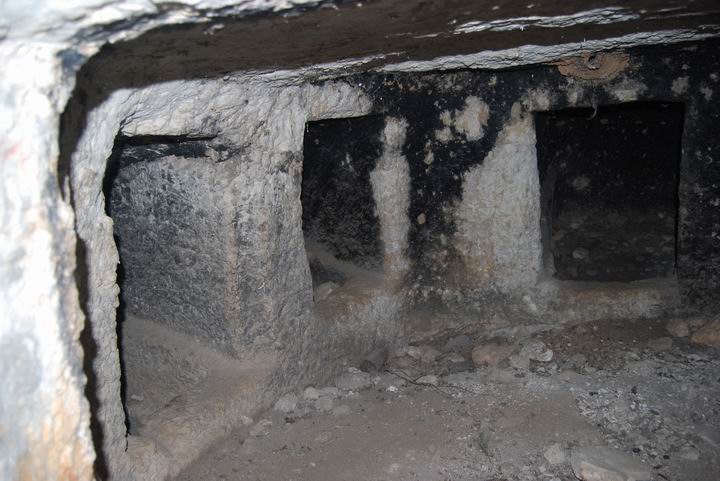 Another set of caves are located closer to the road, near the ancient winepress (which is located in the top right side).  One of these caves is seen below, hidden in the center below the bush. The grooves in the rock, on both sides of the cave shaft,  were used as a diversion channel to prevent the rainwater from flooding the cave. 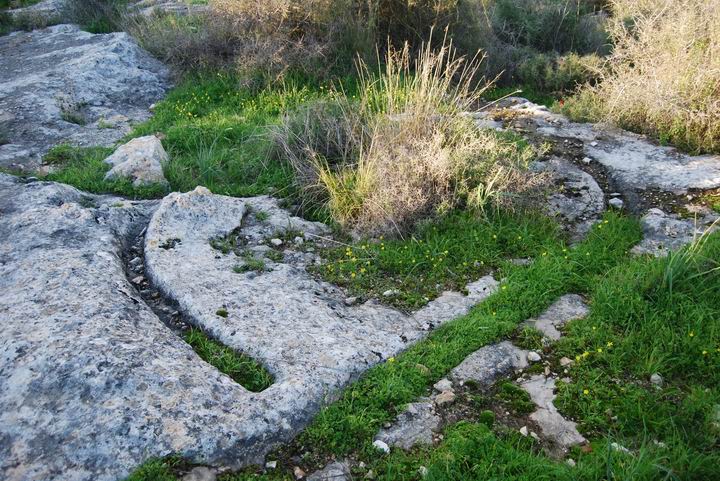 Just south to  the road to new Avdon, and 50M west of the ancient aqueduct and tombs, is a large rock-hewn winepress. The treading floor (pressing platform of the winery) is a 4x4m cavity cut into the rock, and covered with mosaic stones, as seen below. There is also a square collecting vat (2.6m x 2.6m) with wide ledge cut into the side of the collecting vat. 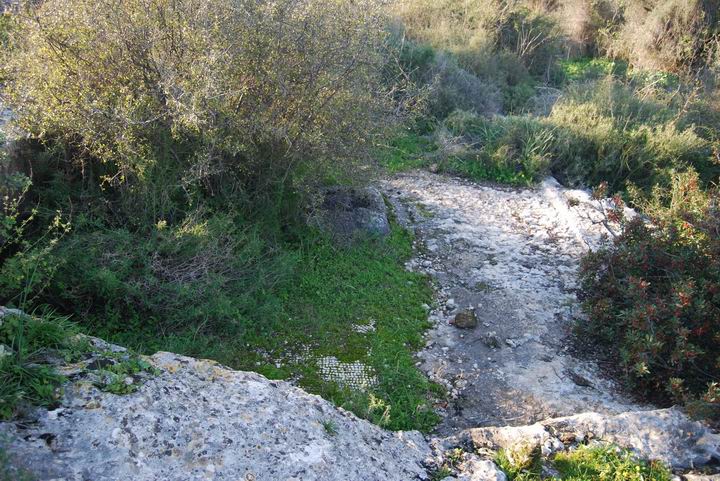 Another view of the winepress, from the west side, is seen below. 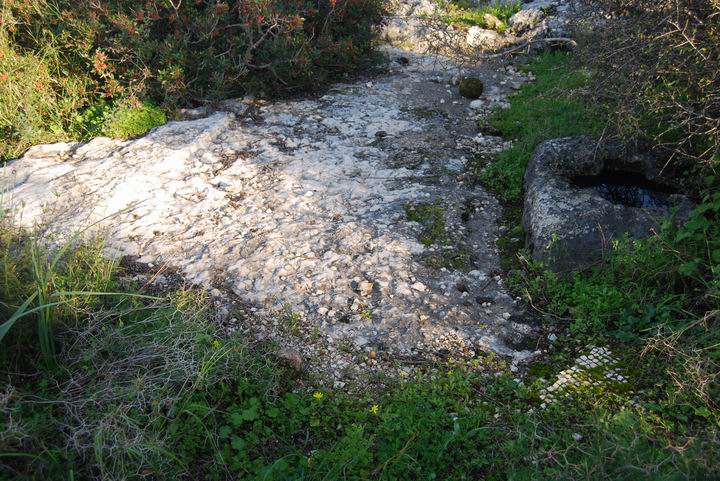 Through the quarry, 0.5KM north-east to the site of lower Manot and just above the road to Avdon, is a long groove which is cut in the rock along the edge of the cliff.

This was part of an ancient aqueduct, which may be related to the water mill that was located at its edge. It may have also been a part of the water supply for the Manot - either for the village or for the sugar factory. 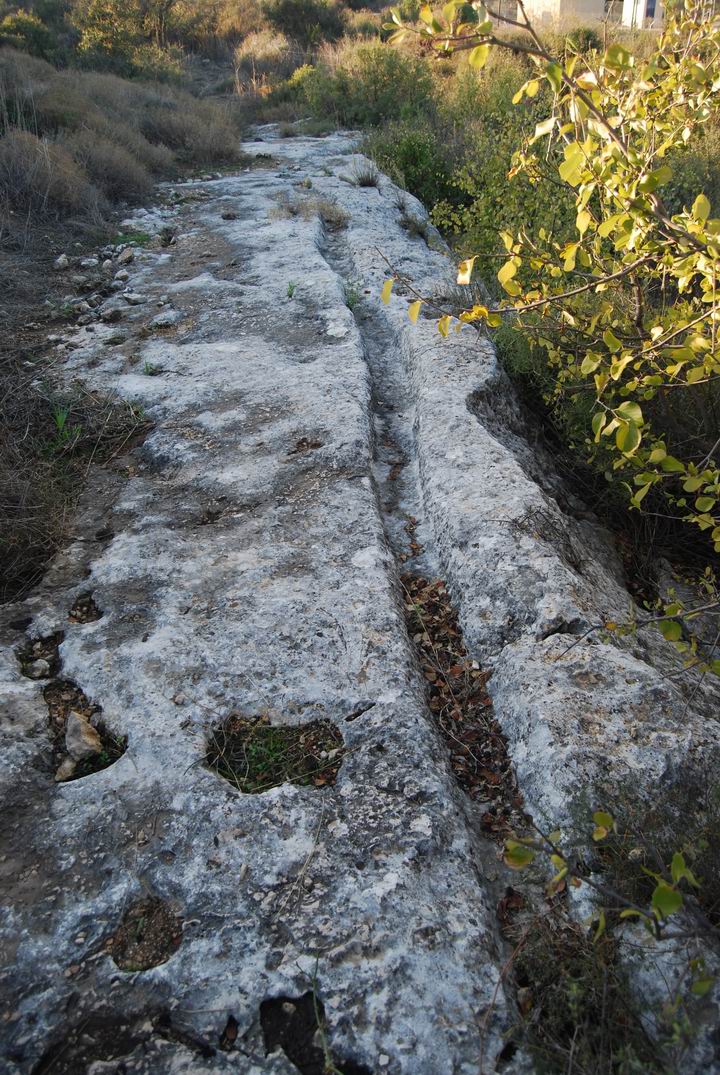 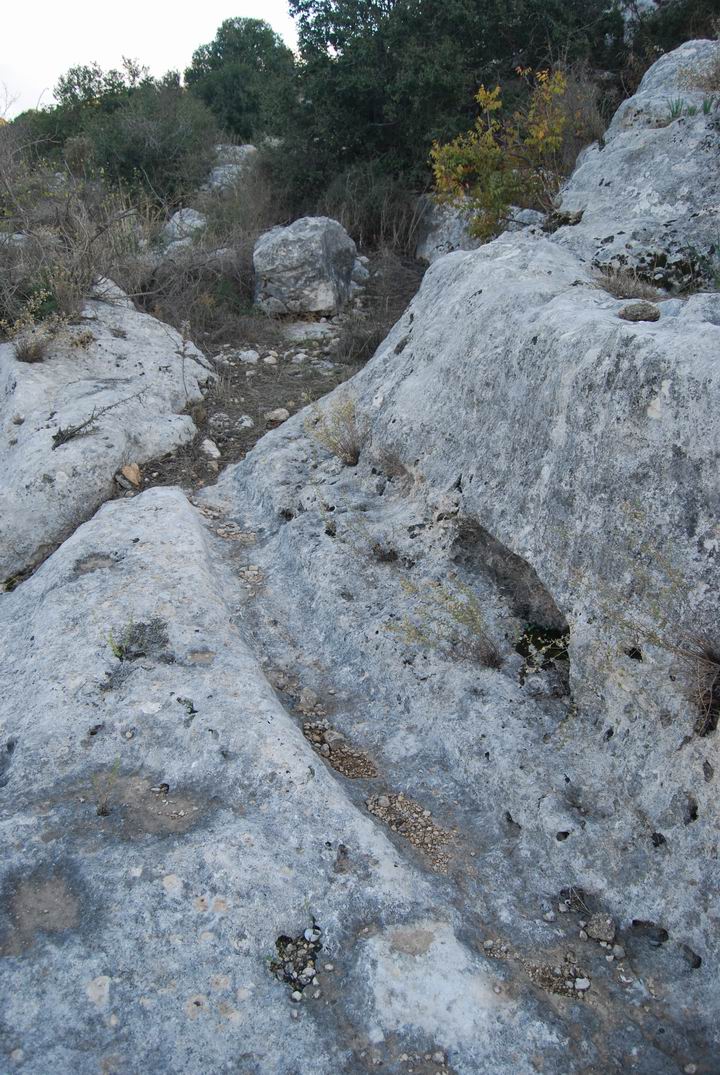 An aerial quadcopter view from the north side is seen in the following photo. The route of the aqueduct can be seen following the slope of the rocks towards the right (west) side. 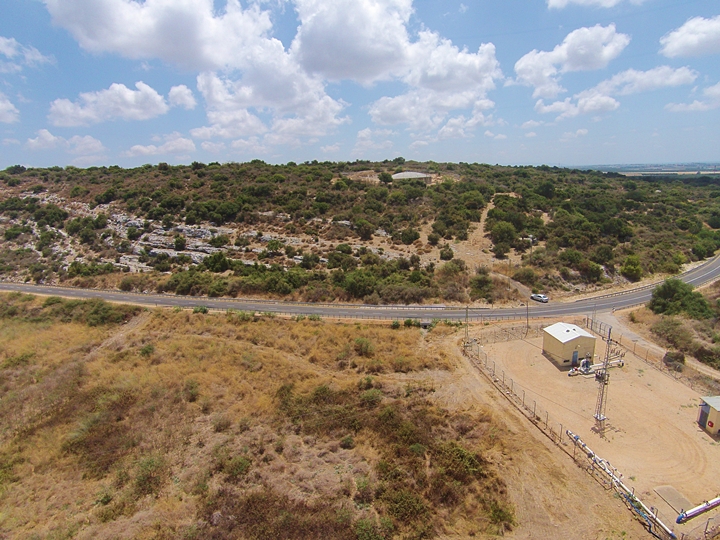