Lod (Lydda) is a historic city, starting from a Canaanite city situated along two major roads in the heart of the Country. The birth and burial place of the famous St. George, an early Christian Martyr who inspired the Crusaders and Christian World.

Lod (Lydda) is an historic city, starting from a Canaanite city situated along two major roads in the heart of the Country.  It became an important Jewish city until the Roman period. Lod/Lydda  is the birth and burial place of the famous St. George, an early Christian Martyr who inspired the Crusaders and the Christian World.

This page is an overview of the old sites of Lod. Additional information can be found in web pages that provide site specific information and photos.

The following aerial view shows some of the the points of interest on and around Lod.  Point on the yellow points to navigate to the selected point in this page and other pages. 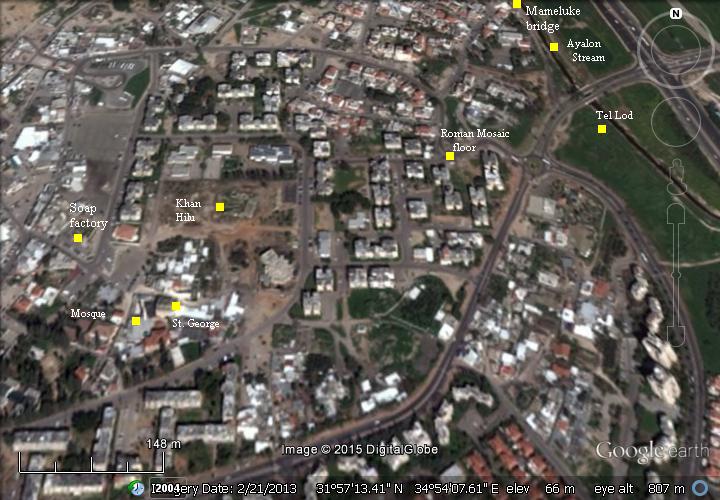 Scholars debate whether the Canaanite city  was destroyed before or during the conquest of Canaan by the Israelites. According to the Bible, Lod was settled  by the tribe of Benjamin (1 Chronicles 8: 1,12): "Now Benjamin begat...and Shamed, who built Ono, and Lod, with the towns thereof ".

This map, illustrating the greater area of the site,  indicates the roads and sites during the Biblical period (Iron age period until the Roman period).  Lod/Lydda is situated along two major roads  - the west/east road from Jaffa/Joppa to Jerusalem, and the north-south coastal road ("Via Maris"). The city's location was at the point of crossing of the Ayalon stream. 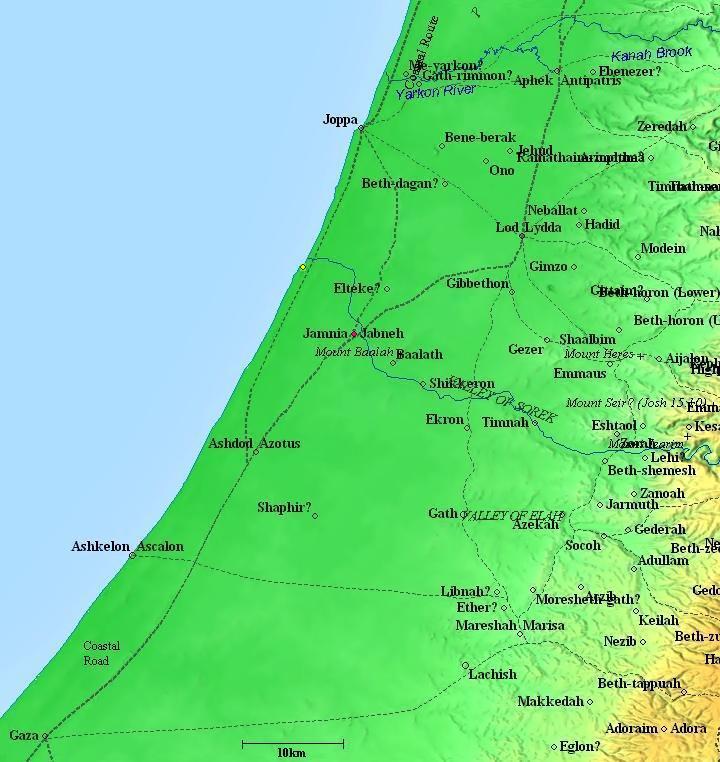 Map of the area around Lod  (based on Bible Mapper 3.0)

After the return from the Babylonian exile, Lod was resettled (Ezra 2:1, 33): "Now these are the children of the province that went up out of the captivity, of those which had been carried away, whom Nebuchadnezzar the king of Babylon had carried away unto Babylon, and came again unto Jerusalem and Judah, every one unto his city; ... The children of Lod, Hadid, and Ono, seven hundred twenty and five".

Lod/Lydda was a Jewish city, and was incorporated into the Hasmonean Kingdom in 147 BC as part of a treaty the Hasmonean King Jonathan managed to secure from the Seleucids  (1 Maccabees 11:32-34): "King Demetrius to the Honorable Lasthenes, greetings.  I have decided to grant the Jewish nation certain benefits because they are our loyal allies and keep their treaty obligations.  I confirm their rights to the land of Judea and the three regions of Ephraim, Lydda, and Arimathea, which are hereby annexed to Judea from Samaria with all the lands belonging to them".

The Roman city of Lydda was located in the area of the ancient Tel Lod, and in the area north of it until the Lod bridge.

In the year 201 AD Caesar Septimius Severus gave the city a status of a Roman Colonia, and renamed it Diospolis ("city of God"). Coins were minted in the city, with the Greek letters "Diocpolic". A Roman military base was established in the city, with the purpose of keeping a watch on the significant Jewish presence in this area, and in order to protect this strategic crossroad.

St George was born and lived in the 3rd C AD in the city of Lod (Lydda). George, an early Christian, served as a Roman tribune and died in Asia Minor in 303.  He is the most important soldier-saint in Christian tradition since the Byzantine period.

The Jewish center of the city was burnt by the Roman legions during the Constantinus Gallus revolt (351/2 AD), as Lydda was one of the centers of this revolt.  The Christians became the majority of the residents in the city.

In the Byzantine period the city witnessed a commercial prosperity, thanks to the Christian pilgrims who came to see the city where Peter cured the sick man, and the birth and resting place of St. George.

George was venerated (honored as a saint) at the end of the 5th Century. During the 6th Century, a large Church was built over the traditional site of his burial site.   Remains of this church can be seen in sections of the adjacent mosque.

The Sasanian-Persians defeated the Byzantines in the battle of Antioch (613) and conquered the land  (614). They damaged the Church.

After the conquest of Jerusalem and the Holy Land by the Arabs (638AD), Lod became a regional government city and was renamed Lydda.  In 716 the Umayyad Caliph Sulayman ibn Abu al-Malik founded a new city nearby, naming it Ramla. This moved the center of power to the new city, while Lod/Lydda was partially destroyed.

The church was initially unharmed, as it was  honored by the new rulers, who respected St. George and his burial place, as well as other Christian sites.  However, the Byzantine church was later leveled by the Arab rulers when their faith became more extreme. The church was destroyed, as suggested by scholars, in 1010 by the Fatimid ruler Al-Hakim bi-Amr Allah (985-1021). This ruler was known as the "Mad Caliph", as he destroyed the Holy Sepulcher in Jerusalem (1009) and all the convents and churches of the Holy Land in the following years.

The destruction of the Holy Sepulcher may have sparked the Crusades, which were aimed at regaining the control of the Holy city and rebuilding the Holy Sepulcher.  The crusade to liberate the Holy Land and free Jerusalem was initiated in the great council meeting of Piacenza (March 1095), following an appeal from the Byzantine emperor Alexios I Komnenos to repel the Muslim (Seljuk) Turks conquests in the south Turkey. Pope Urban II (1042-1099) pushed for a military action to the Holy Lands at the council of Clermont (27 November 1095), with the primary goal to assist the Byzantine capitol of Constantinople. His speech at the council had a great influence, resulting in a call for arms throughout Europe to regain the Holy Lands under the name of God.

Jerusalem was captured finally a month later, thus completing the First Crusade goal and establishing the Kingdom of Jerusalem.

Ayyubid conquest:     The Ayyubid dynasty was founded by Saladin (Salah ad-Dīn Yusuf ibn Ayyub), and ruled Syria and Egypt (1171-1341). They defeated the Crusaders in the decisive battle of Hittim (July 4, 1187). Following this victory, most of the Holy Land - including Lod - were captured by Saladin 1187. The church was destroyed by Saladin's armies  in 1191.

A third Crusade, headed by Richard the Lionheart, recaptured the coast line including Lod (1192). St. George became a popular "warrior" saint for the third Crusade. According to legends, the warrior saint helped the Crusaders in their battles.

A peace treaty of 1198 gave the Crusaders the right to hold the coast line cities. The Crusaders held this region until 1263.

The Mamelukes were Turkish prisoners of the Mongols who were sold to the Sultan of Egypt, trained by him and served as his palace guards. In 1250 the Mamlukes, headed by Bybars, seized the control of Egypt, and defeated the Mongols (1260) and captured the Holy Land (1263).

Lod was an important Mameluke city, situated on the road to Jerusalem. They constructed an impressive bridge and great mosque:

An old photo of the Mameluke bridge is seen here: 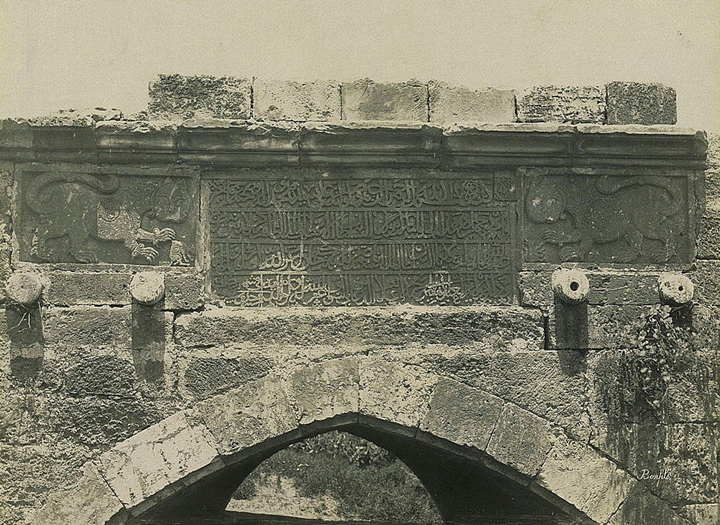 The Mamelukes continued to rule the entire region until 1516, when they were defeated by the Ottomans from Turkey.

The famous painter of the Holy Land, David Roberts, visited Lod in march 29, 1839 and illustrated this beautiful view of the city. 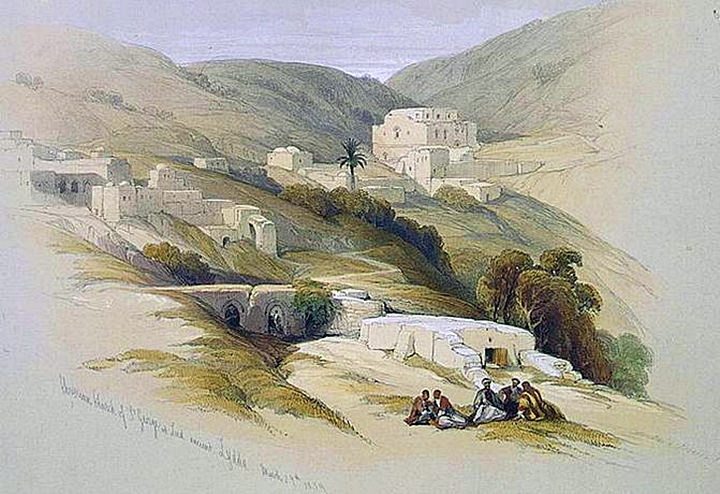 The area of was  examined in the Palestine Exploration Foundation (PEF) survey (1866-1877) by Wilson, Conder and Kitchener.   The map below is a section of their survey results. The sites of Lod are described in their report (Vol 2, Sheet XIII, p 252):

The sites of Lod (Ludd) are detailed in other sections of their report (p. 268) -

Most of the old city of Lod is gone, and only few remains can be seen among modern buildings.

An aerial view, captured by a quad copter, shows the area of St. George from the north side. The Church and Monastery are located to the left side of the minaret of its adjacent mosque. 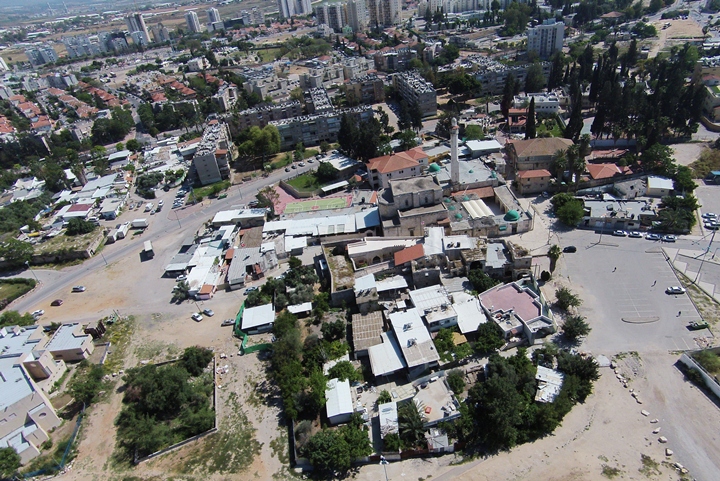 St. George, the most important soldier-saint in the Christian tradition, was born in Lod (Lydda). The church was first constructed in the Byzantine period, rebuilt by the Crusaders, and rebuilt during the late Ottoman period. 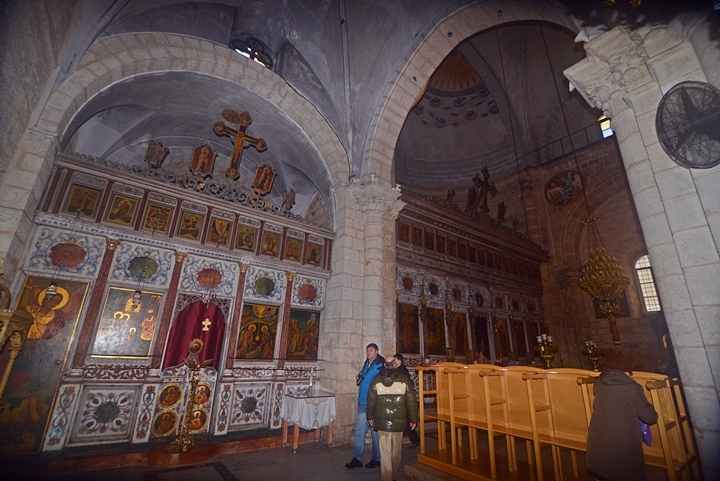 Steps on both sides of the main hall leads to an underground chamber - the crypt of the church - where the bones of St. George are buried.   The crypt is dated to the Byzantine period, and the Crusaders and Ottoman period churches were actually built over it. 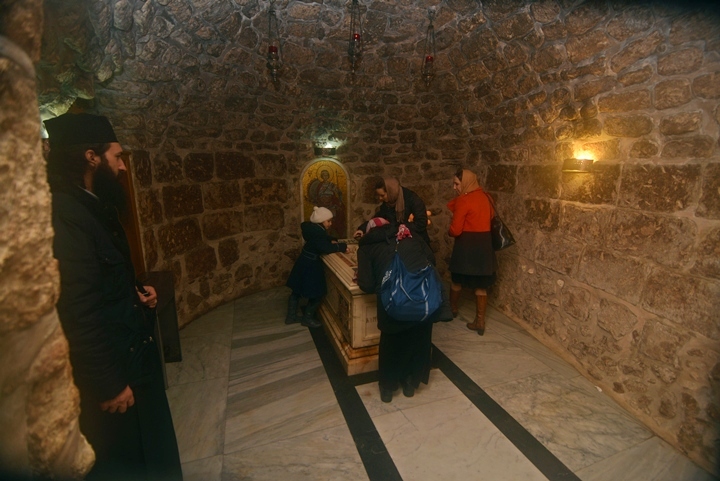 The Grand mosque (Jamaa el-Kebir) is adjacent to St. George, and built over a section of the Church on its west side. Its high minaret tower is seen in this photo, as well as the courtyard.  The structure on the left corner is a place where the body is washed prior to former prayers and reading the Quran (the Islamic Wudu procedure).

Sections of the Byzantine and Crusaders  structures are embedded inside the mosque. 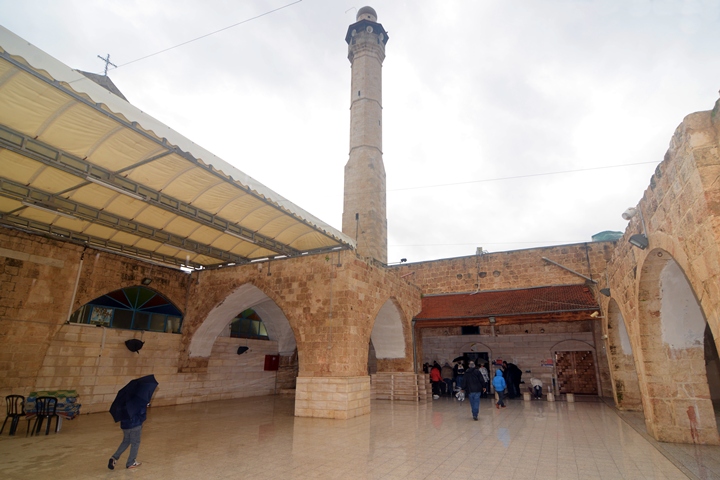 Behind the Grand mosque, on the south side, is the el-Omari Mosque. It was built in 1268 during the Mameluke period, and is named after Omar Ibn el-Khattab (577-644), the Caliph who conquered Jerusalem in 637 AD and expanded the Islam Caliphate. 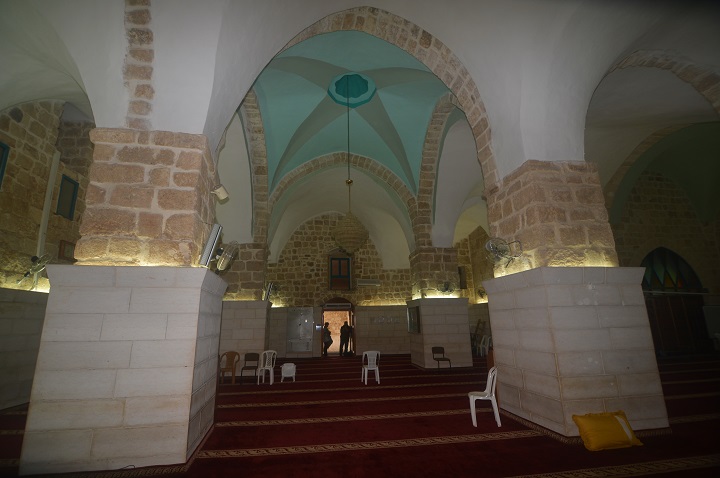 An impressive 19th Century Khan (inn, caravansary) located near St. George. Excavations and conservation works are reconstructing this unique structure, with plans to open it as a major tourist attraction.

An aerial view, captured by a quad copter, shows the Khan from the west side.  The entrance to the site is from a gate on the lower side of the picture. 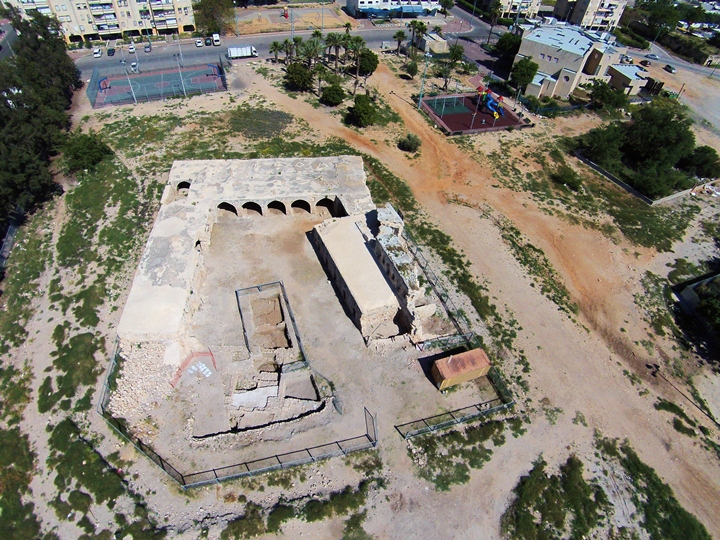 Tel Lod, the ancient Canaanite and Israelite period city, was located on an artificial mound in the north side of the city,  on the south bank of Ayalon stream. Remains of the ancient periods were identified in the archaeological excavations. These ruins are not visible today above the surface. 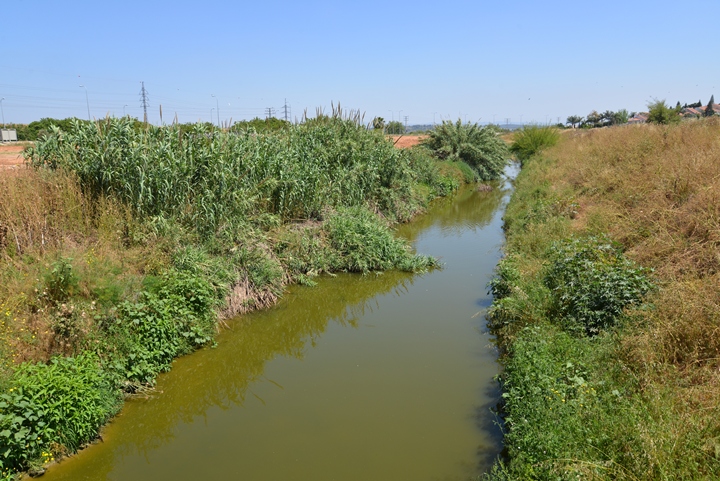 In 1273 the Mamelukes  constructed a bridge over the Ayalon stream near the city of Lod. The impressive bridge ("Jisr Jinda") is 30m long, 13m wide, and is supported by three arches. 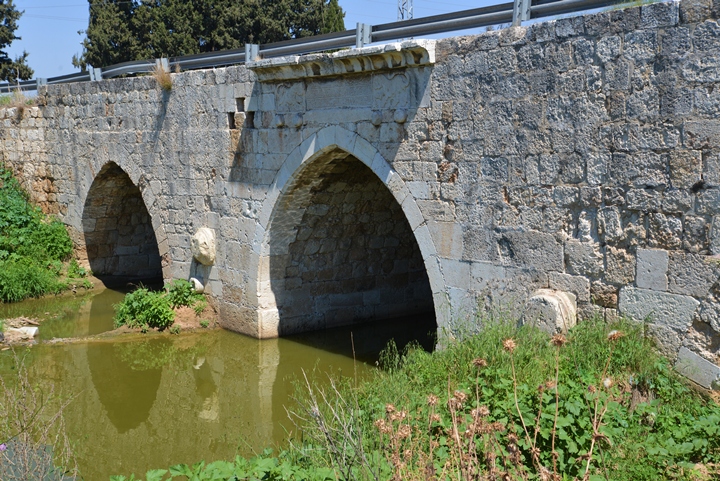 On both sides of the bridge is an inscription commemorating Baybars and the builder, with an illustration of a cheetah  (royal symbol of Bybars, often misplaced with a Lion). It appears toying with a rat, symbolizing their enemies. The construction of both mosque and bridge were managed by Ala e-Din a-Suk. 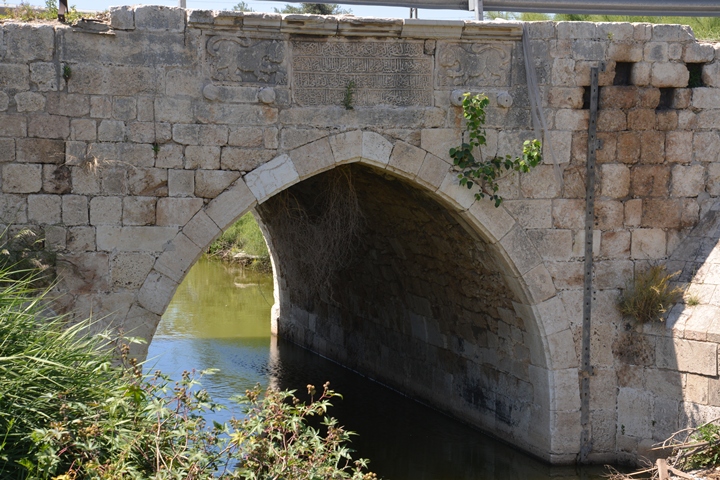 In 1996 an impressive 4th Century AD mosaic floor was found in Lod, located near the Ayalon river on the north east side of the old city (along He-Khaltuz street). The purpose of the structure, in which the floor was laid out, is yet unknown. 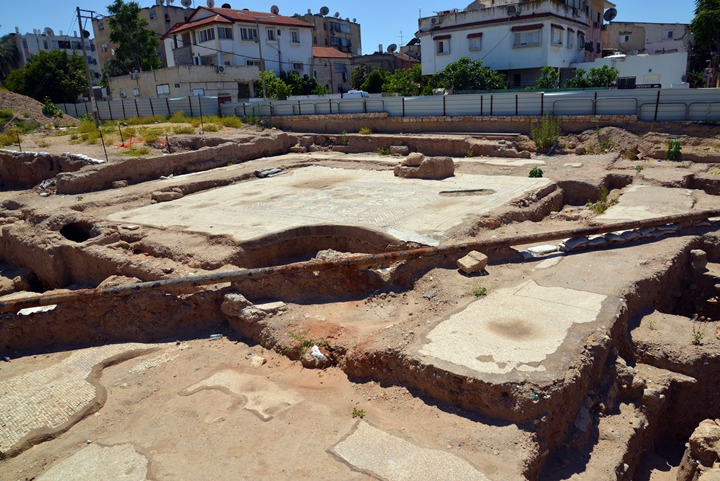 The 18 square meter floor, the largest found in Israel, and is "composed of colored carpets that depict in detail mammals, birds, fish, a variety of flora and the sailing and merchant ships that were used at the time" (- IAA report, from excavations directed by M. Avissar). 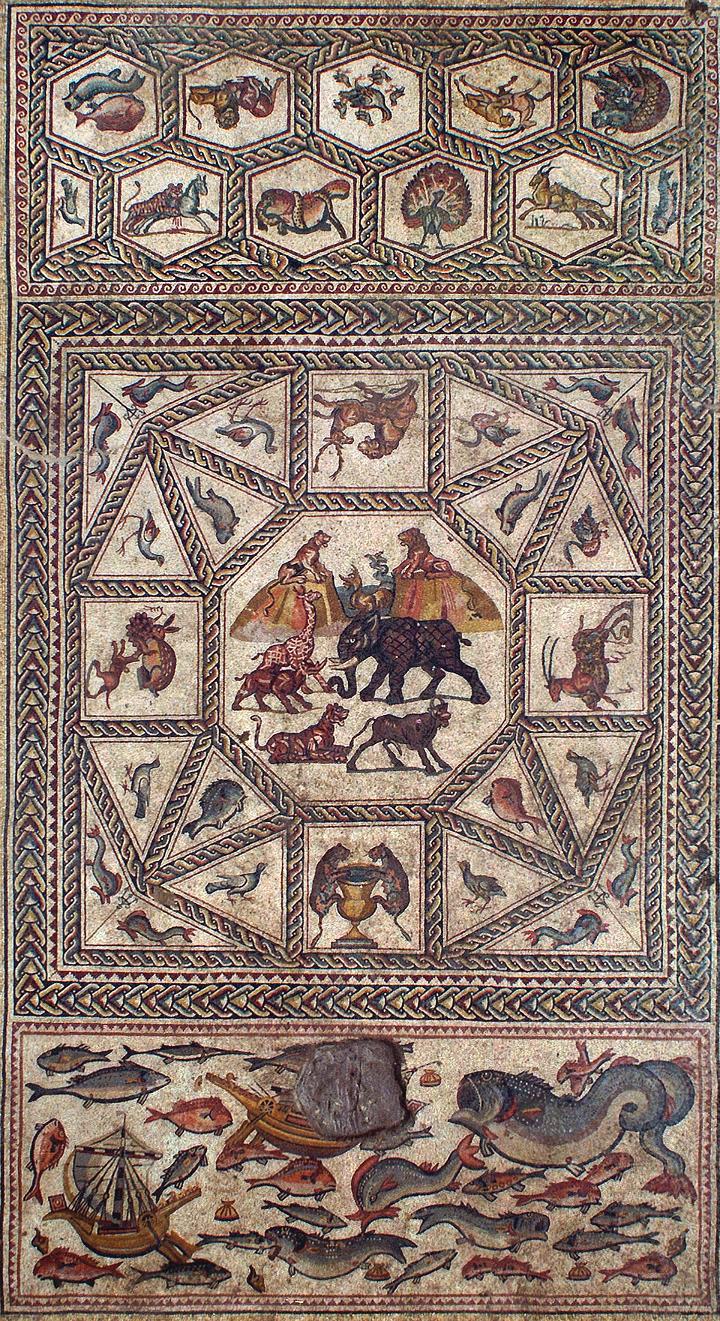 Photo courtesy of the IAA

The site is currently closed to the public. Hopefully soon it will be part of a new Archaeological museum.

Watch a video of the mosaic:

Al-Far soap factory is an early 19th Century stone structure located near the great mosque. The soap was made by crushing olives, then cooked with ash from plants and other oils and chemicals. After the soap bars were left to dry, they were cut, wrapped and  packed in boxes. 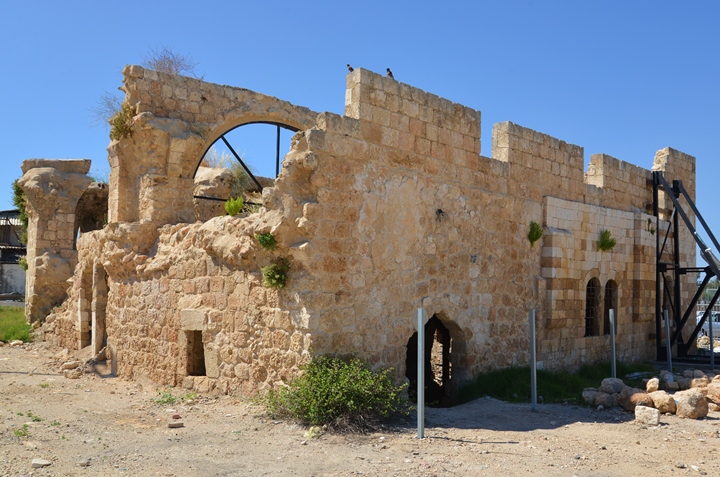 The structure is not yet open to the public, but is planned to join the other historic gems of Lod to be part of a large Archeological center.