This place, on Mount Zion, is the traditional site of the the location of the Last Supper ("Coenaculum"). The present day hall is a 12th C Crusader structure, built on top of King David's tomb.

Mark 15 15: "where I shall eat the Passover with my disciples? And he will shew you a large upper room furnished and prepared"

The site is the traditional location of the upper room of the "Last supper" ("Coenaculum" - dining room).  The "Last supper" is one of these most important events in the life of Jesus, which happened in the upper room of a building in Jerusalem. Jesus and his disciples held a Passover dinner, on the night before Jesus was captured by the Romans, trialed and crucified.

The hall of the Last supper is a 12th C Crusader structure, built on the upper level above the traditional place of the tomb of King David. The archaeological evidence on the lower floor, which revealed an Early Roman level, supports the possibility that this area was indeed the location of the room of the Last Supper.

The site is located on Mount Zion, outside of the old city walls and 100M south-west to Zion gate. It is easily accessed from the parking lot near the Zion gate;  Walk through the alley towards Dormition abbey, and on its corner turn to the left side.

Mount Zion was also the site where some of the events of the last days of Jesus have happened. The "Last supper" is one of these most important events which, according to tradition, happened in the upper floor of the building where the tomb of David is located. As per Mark 15 15: "where I shall eat the Passover with my disciples? And he will shew you a large upper room furnished and prepared".

St. Peter and the other apostles also talk about David's tomb in Acts 2 29: "...the patriarch David, that he is both dead and buried, and his sepulchre is with us unto this day." This text may relate to the original site of the tombs of the house of David, or the new location on Mount Zion.

Another tradition holds that the Holy Ghost descended here as per Acts 2 1-4, and Apostle Peter conducted the sermon: "And when the day of Pentecost was fully come... And suddenly there came a sound from heaven as of a rushing mighty wind, and it filled all the house where they were sitting...".

The second level in this site was a Byzantine building, as determined by an archaeological survey that was conducted beneath the tomb of David, on the lower floor.

The Crusaders  rebuilt  some of the structures on Mount Zion, as well as many sections of Jerusalem. The present day Coenaculum hall is one of these 12th C Crusaders structures. After the Crusaders retreated (1187) the structure was cared by Franciscan Monks, the official custodians of the Holy places.

The Ottomans did not include the area inside the 16th C wall, but regarded the site as a Holy place - the site of the King David's tomb.  They banished the monks, and transformed it into a mosque (1524 AD), as attested by the stone inscription embedded into the eastern wall. The Ottomans, under Sultan Suleiman the Magnificent, added changes which included a prayer corner, colorful windows and a Muezzin tower on the roof. The mosque was named E-Nebi Daud, or: the prophet David.

In the building around the site lived a Muslim family, who held the keys to the site.

The entrance to the complex of King David's traditional tomb and the place of the Last supper is seen below - on the left side, where the synagogues are located on the lower level, the Christian site is on the second level, and the Muslim on the roof. The wall on the right is part of the Dormition abbey. 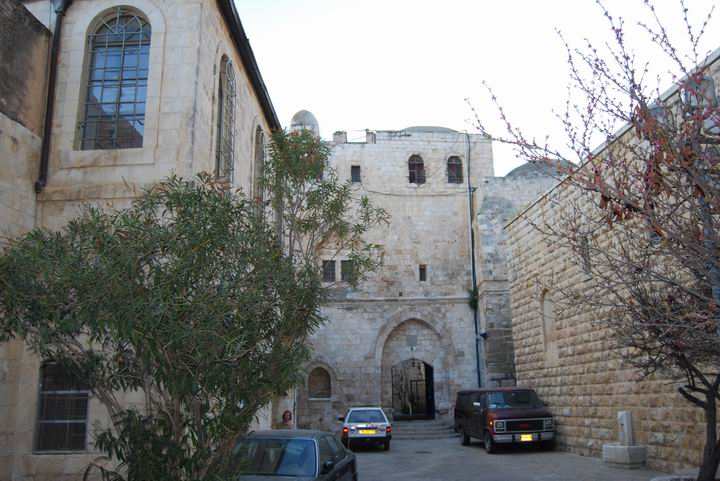 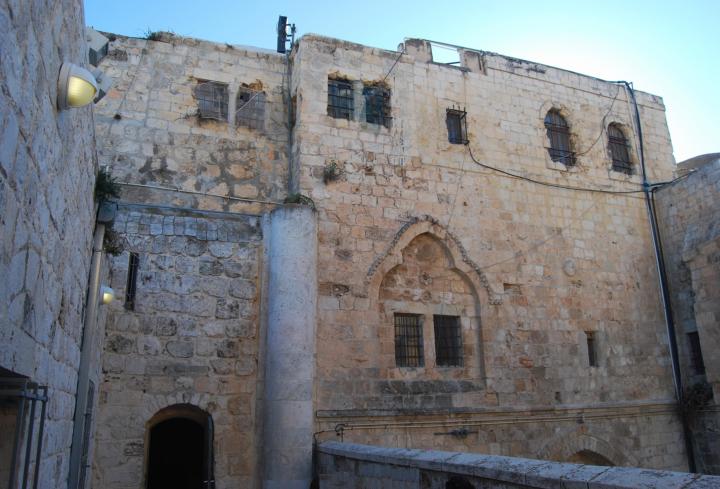 A detail of the entrance is seen below. 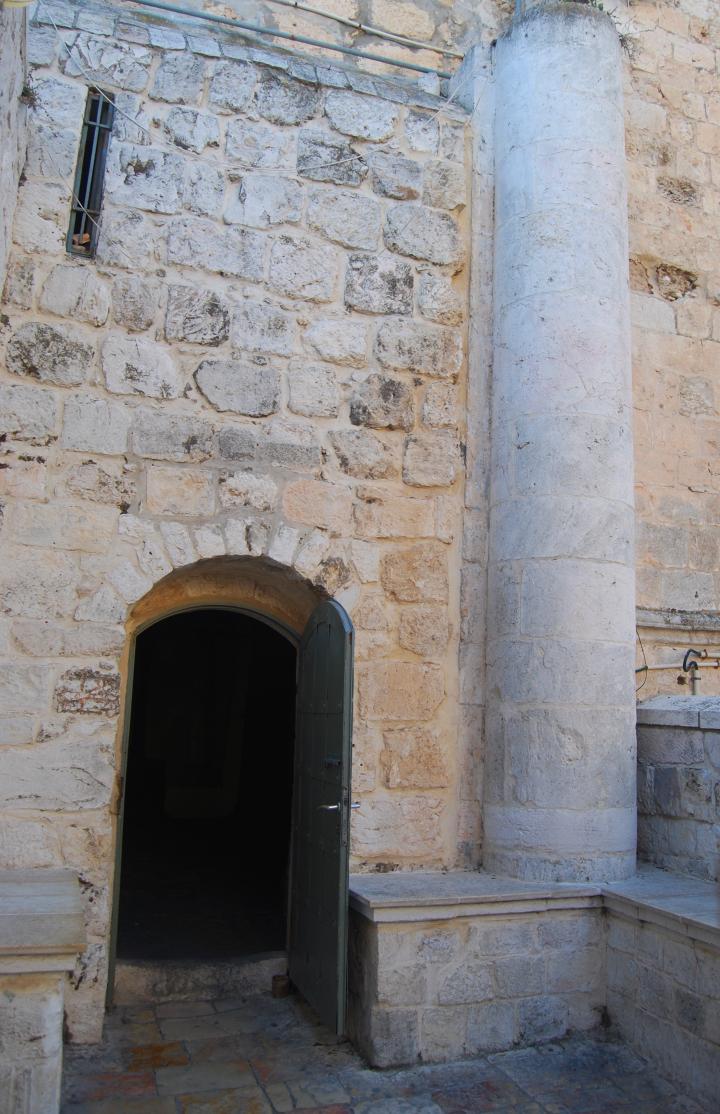 On the photo below is the  view from the entrance from the balcony on the south side. The two windows of the hall are seen on the left side. 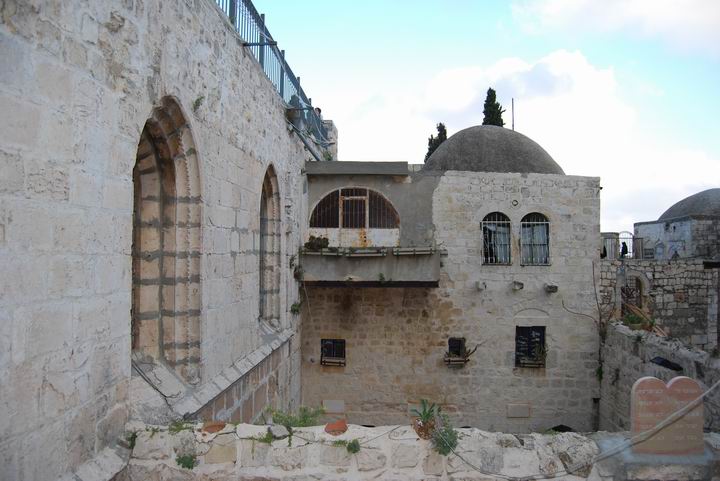 Inside, is the Last Supper hall, seen below. The structure, in the form of a large rectangular arched room,  dates back to the  Crusaders times (12C).  The was built over an earlier Byzantine building. 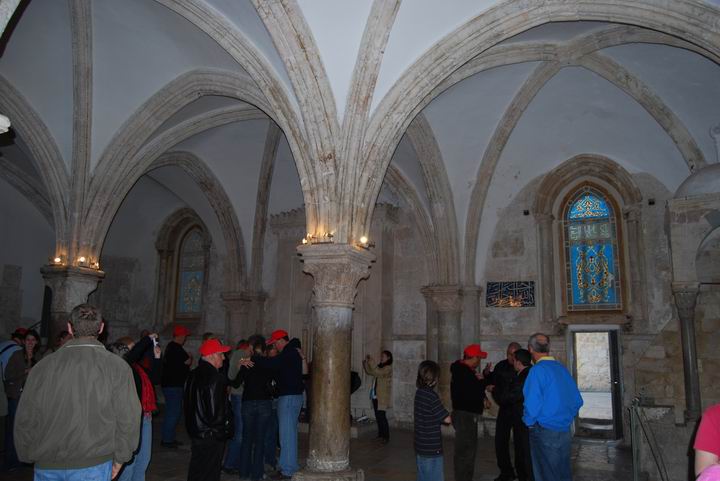 Another view of the Holy place is seen below. The pilgrims are very excited - they dance, chant and pray. Some totally loose control, and the guards occasionally try to cool down the enthusiastic crowd.

A Royal Ottoman Arabic inscription is seen on the wall at the left background, installed by the Ottoman Sultan Suleiman in 1524 AD. It narrates the conversion of the church into a mosque. 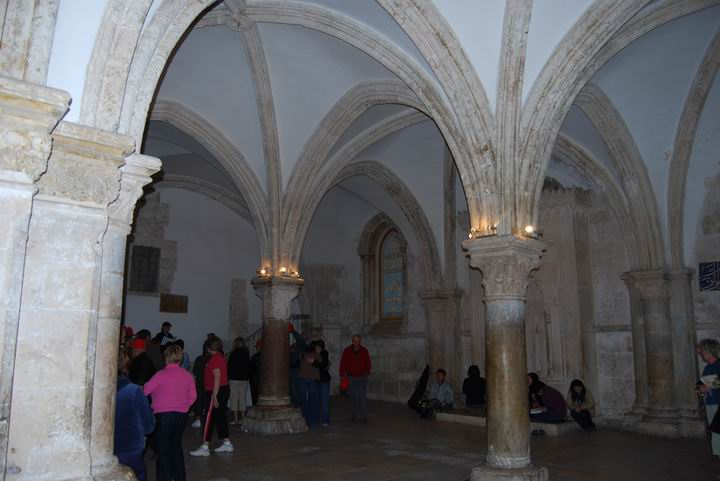 The photo below shows a view of the Last Supper hall towards the south-west corner. The staircase in the left side leads to the first floor (but is closed), while the door on the left is an exit to the balcony  overlooking the court yard. 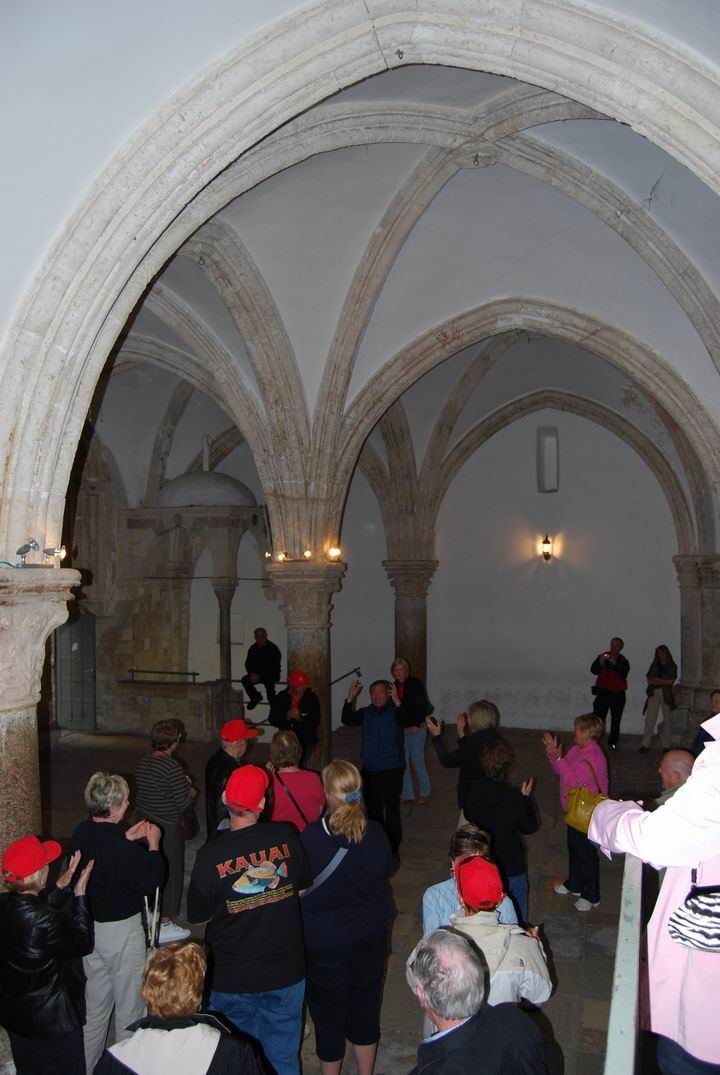 The hall and ceiling are remains of the Crusader hall, dated to the 12th C. Interesting details can be seen around the  caped structure on the south-west,  which is located above a staircase. 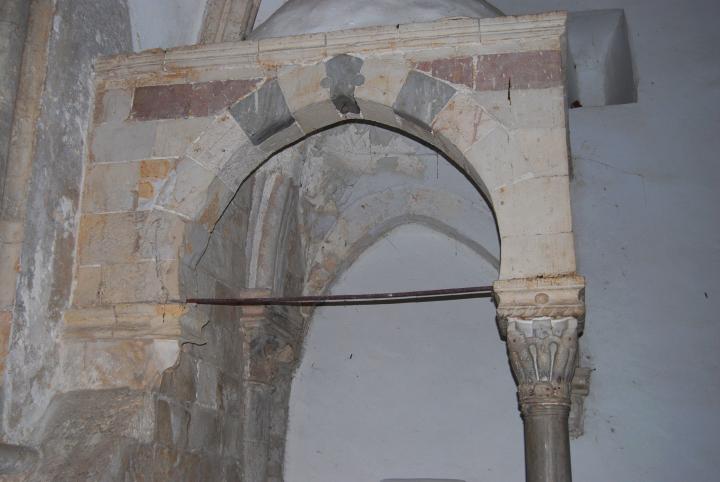 The photo below shows the capitol above the marble column on the right side, with group of three pelicans sculpted into the stone. In this scene is a mother bird with its young birds standing on her left and right; they are picking her heart, eating her flesh and sucking her blood. This symbolizes Jesus and his sacrifice to his disciples, as in Matthew 26:"Take, eat; this is my body....  Drink ye all of it; For this is my blood of the new testament...". 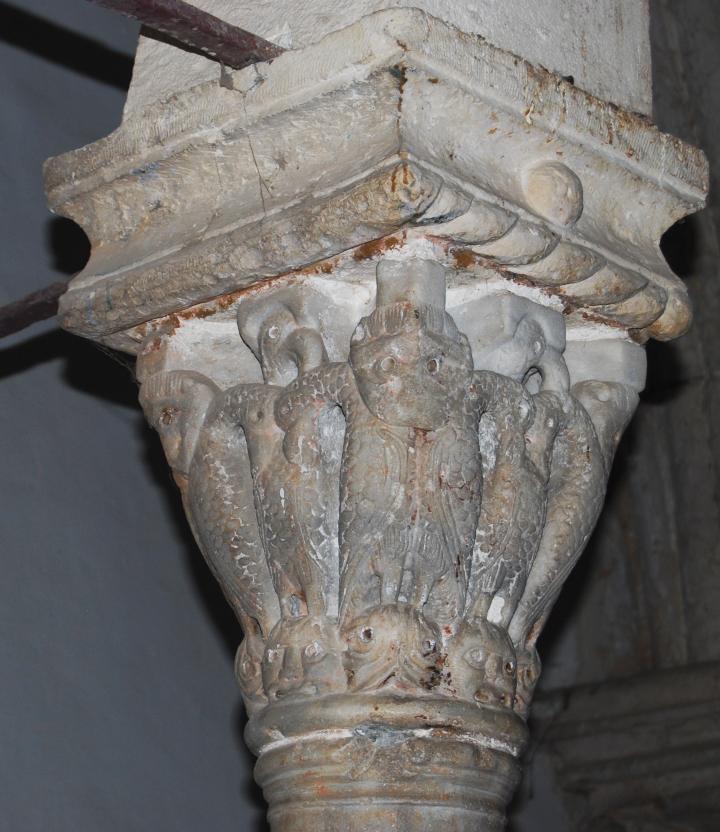 Beneath the dome is a staircase that leads down to the tomb of King David, but this passage is closed. 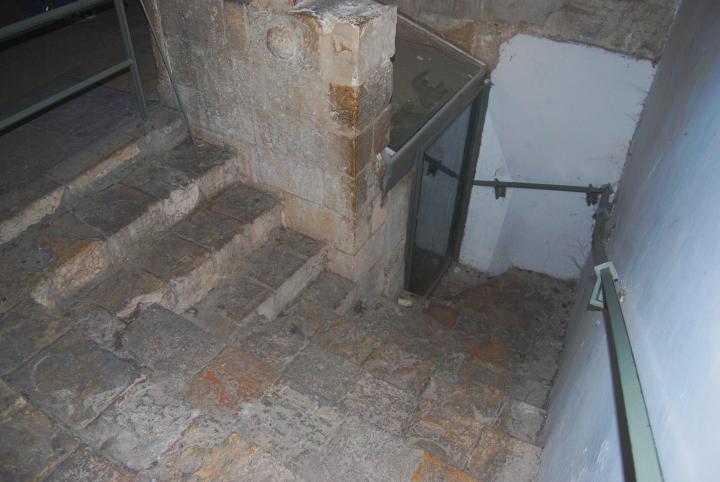 Mosque inside the hall:

In the 16th C, the Ottomans transformed the structure to a mosque, and replaced its windows with these beautiful vitrages, as seen below. The Arabic text includes verses from the Koran, including a praise to King  David (whom Islam regards also as a prophet). 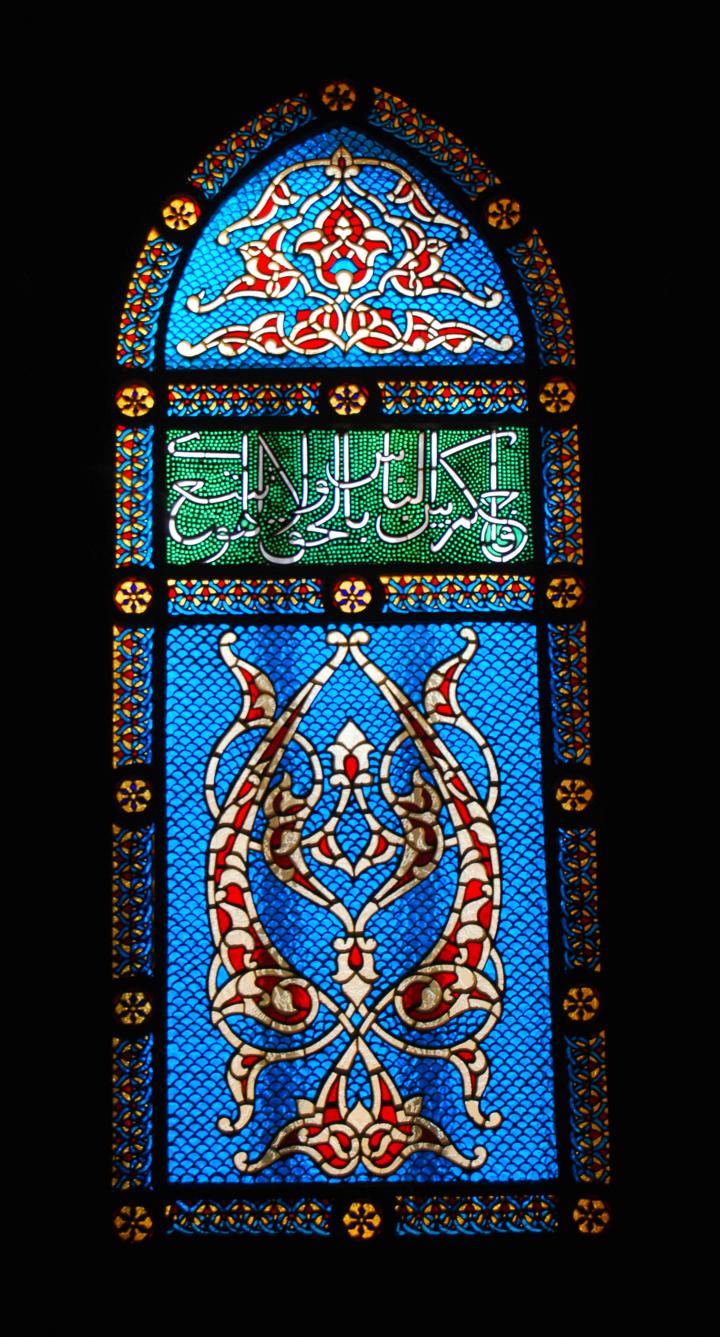 A prayer niche - Mihrab - is embedded on the south wall,  directed towards the Islam Holy cities of Mecca and Medina. 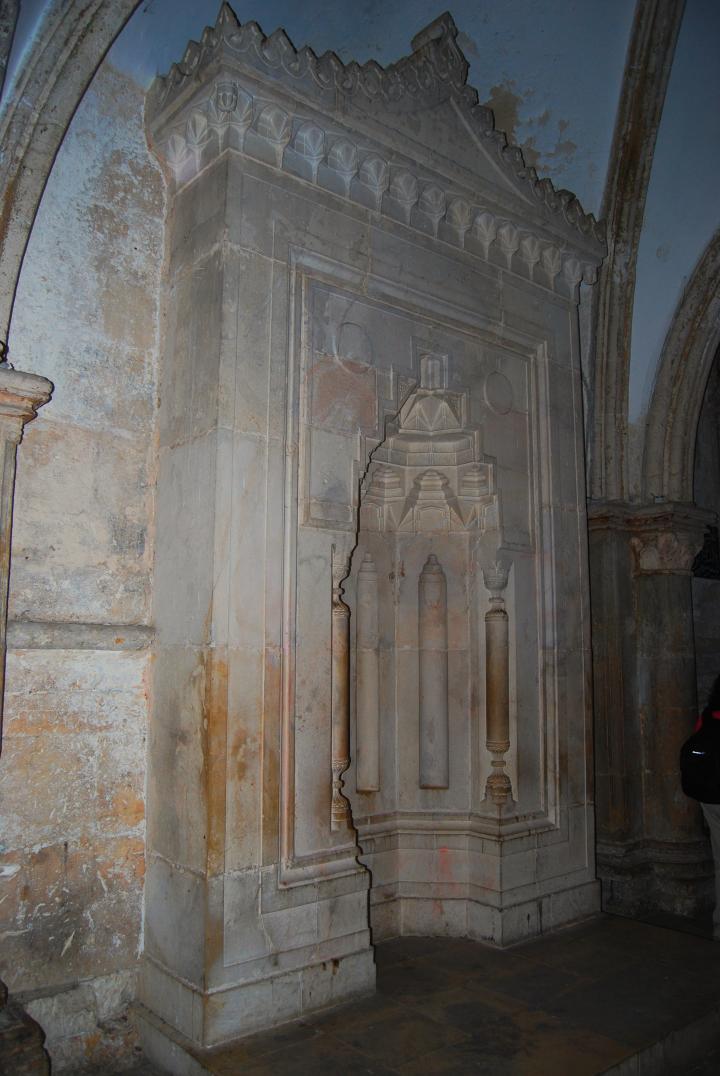 The Last supper was held, according to tradition, in the upper floor above the present location of the tomb of David:

"And the first day of unleavened bread, when they killed the passover, his disciples said unto him, Where wilt thou that we go and prepare that thou mayest eat the passover? And he sendeth forth two of his disciples, and saith unto them, Go ye into the city, and there shall meet you a man bearing a pitcher of water: follow him. And wheresoever he shall go in, say ye to the goodman of the house, The Master saith, Where is the guestchamber, where I shall eat the passover with my disciples? And he will shew you a large upper room furnished and prepared: there make ready for us.  And his disciples went forth, and came into the city, and found as he had said unto them: and they made ready the passover.  And in the evening he cometh with the twelve. And as they sat and did eat, Jesus said, Verily I say unto you, One of you which eateth with me shall betray me. And they began to be sorrowful, and to say unto him one by one, Is it I? and another said, Is it I? And he answered and said unto them, It is one of the twelve, that dippeth with me in the dish. The Son of man indeed goeth, as it is written of him: but woe to that man by whom the Son of man is betrayed! good were it for that man if he had never been born.

A parallel text from Matthew:

"Now the first day of the feast of unleavened bread the disciples came to Jesus, saying unto him, Where wilt thou that we prepare for thee to eat the passover? And he said, Go into the city to such a man, and say unto him, The Master saith, My time is at hand; I will keep the passover at thy house with my disciples. And the disciples did as Jesus had appointed them; and they made ready the passover. Now when the even was come, he sat down with the twelve.

According to tradition this is the site where The Holy Ghost descended on Pentecost:

"And when the day of Pentecost was fully come, they were all with one accord in one place. And suddenly there came a sound from heaven as of a rushing mighty wind, and it filled all the house where they were sitting. And there appeared unto them cloven tongues like as of fire, and it sat upon each of them. And they were all filled with the Holy Ghost, and began to speak with other tongues, as the Spirit gave them utterance".

The Tomb of David is referred in this chapter, by Apostle Peter, who also spoke the Pentecost sermon:

"Men and brethren, let me freely speak unto you of the patriarch David, that he is both dead and buried, and his sepulchre is with us unto this day".