The ruins of the ancient city are located on a large mound, with remains from the Canaanite, Israelite and Persian/Hellenistic periods.

Joshua 21 32: "Kedesh in Galilee with the open land about it, the city of refuge for the manslayer".

Tel Kedesh is located above the Kedesh valley It is composed of an an ancient mound (with North and South hills) and a lower east hill,  with a spring in the center.

The ancient Biblical mound (which was inhabited until the Hellenistic period) is quite large - 900 m from north to side, with a total size of 20-25 acres. Its boundaries are marked in yellow in the center of the map below.

The North side of the ancient mound is at 485m above sea level, almost 100m higher than the plateau of the Kedesh valley around the site (395m). The mound is protected by high steep walls, which was an artificial glacis wall that protected the city.

You can point on the purple points to navigate to the selected point in this page or other pages. 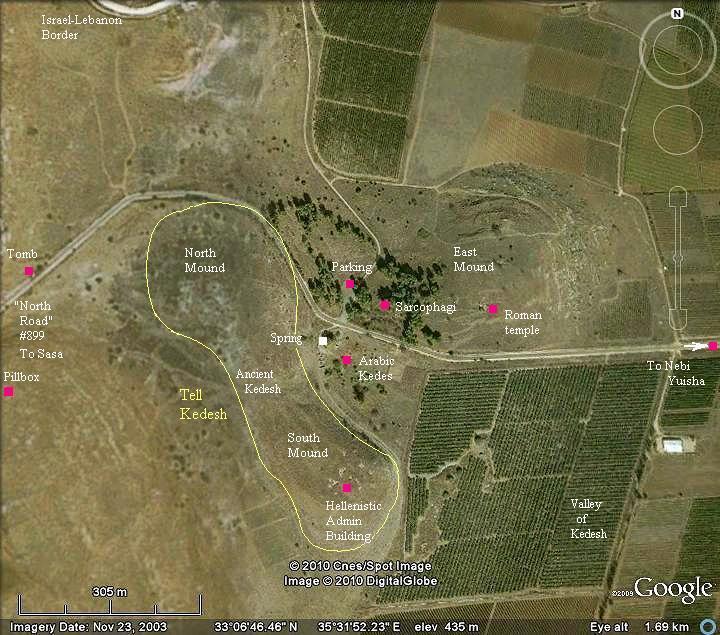 For a complete history of Tel Kedesh - refer to the overview page.

The southern mound is seen from the west in the picture below, with a section of the northern mound on the left. This artificial mound has very steep wall all along its sides, which was once a glacis wall that protected the Canaanite/Israelite city. 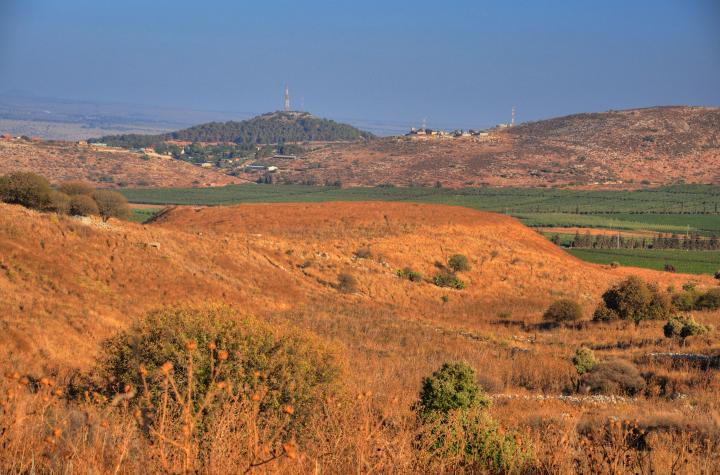 A large scale archaeological work on the ancient mound started only recently, with plenty of places to dig. The team started the exploration of Tel Kedesh on the southern side. They found that the southern mound was occupied only until the Hellenistic period. The PEF survey by Condor, Kitchener (1872-1877) and Wilson (1866) found ruins of a Byzantine chapel on the hill - a small church (25 square feet) in the form of a cross. 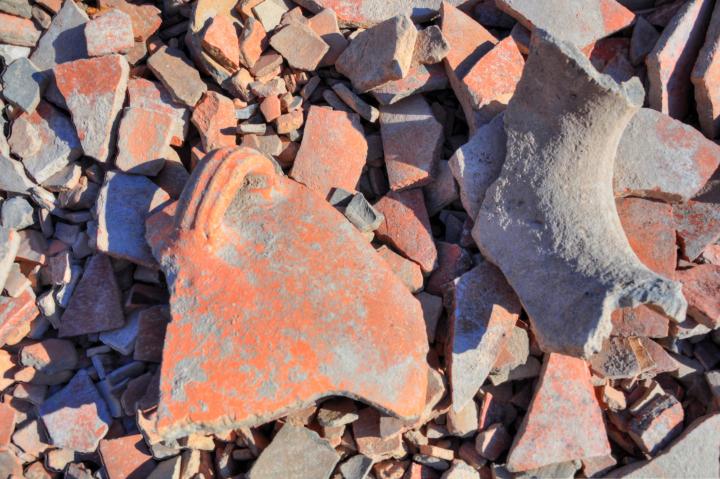 Another view from the north, towards the south-east edge of the mound, is seen in the next picture. This section - at the left edge on top of the mound - is where the excavations focused in years 2007-2010. 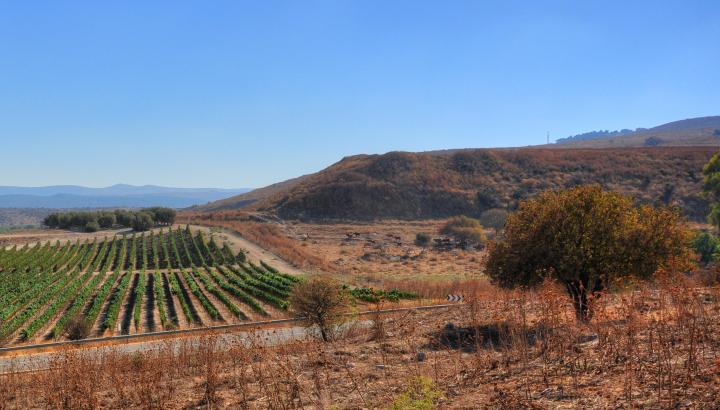 (b) South Side - PHAB building

*** Special Thanks *** to Co-Director Professor Andrea Berlin (Boston University), who graciously helped us to understand the excavation photos and the plan of the building. Some excerpts of her explanations were embedded in the description below.

A large Persian/Hellenistic Administration Building ("PHAB"), located on the south most side of the mound, was the focus of the recent excavation seasons.  The following photo shows the ruins from the south side.   The building was built in two periods - the Persian period (5th to 3rdC BC) and - on top of it - the Hellenistic period building (3rd to 1st C BC). After the Hellenistic period the city relocated to the eastern hill, and so this was the latest major archaeological layer at this location. 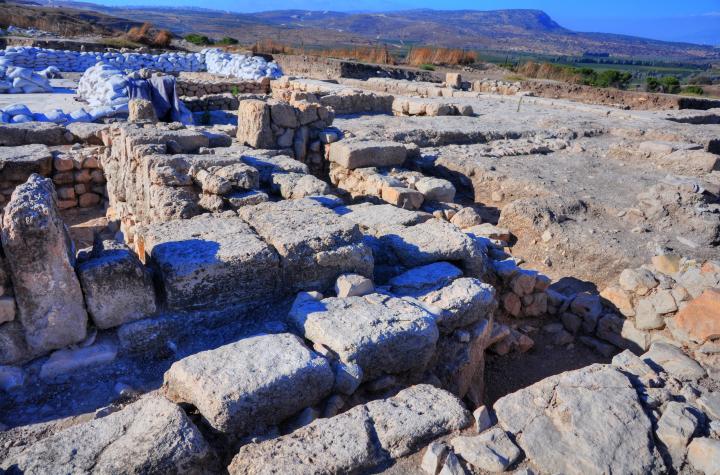 The PHAB structure covers an area 45m (148')  by 50m (164').  The entire building was administrative and ceremonial; there were no living quarters inside.

This photo was captured by a quadcopter drone in December 2014. 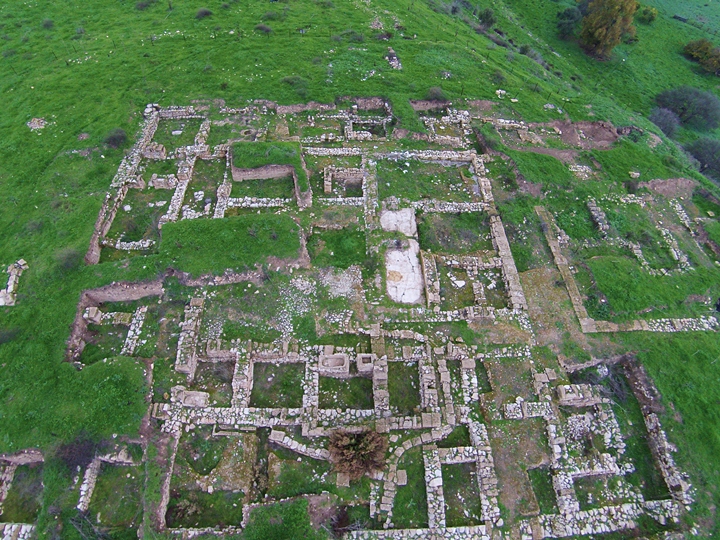 The main entrance to the building was from the north (see plan below, slightly rotated to fit the above view). This entrance led into a wide passage, possibly unroofed, that separated the eastern rooms from the ceremonial and administrative rooms in the middle and on the west. The eastern area was a separate wing with small rooms that perhaps functioned as offices.

In the middle of the building  were three decorated rooms, two small and one quite large, that formed a reception area. On the western side, and in the southwest and northwest corners, were storerooms and also an archive room. These storerooms were separated from the decorated room by a large open air courtyard situated in the western sector of the building.  Finally, along the southern sector of the building were utility areas including drains, ovens, and large plastered bins probably intended to hold agricultural products. 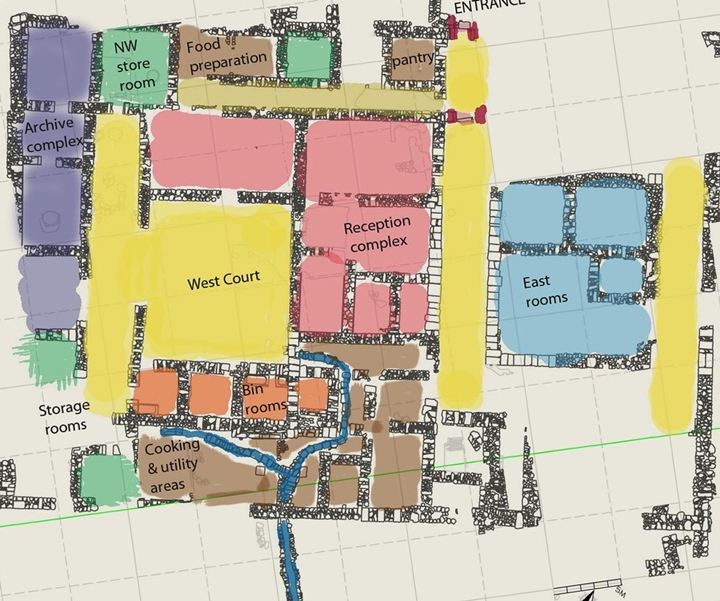 The PHAB was situated in the southeastern corner of the southern mound, and here you can see that the building's east wall runs close to the mound's eastern edge (as currently preserved). The two large flat stones are right outside the eastern wall of the building. 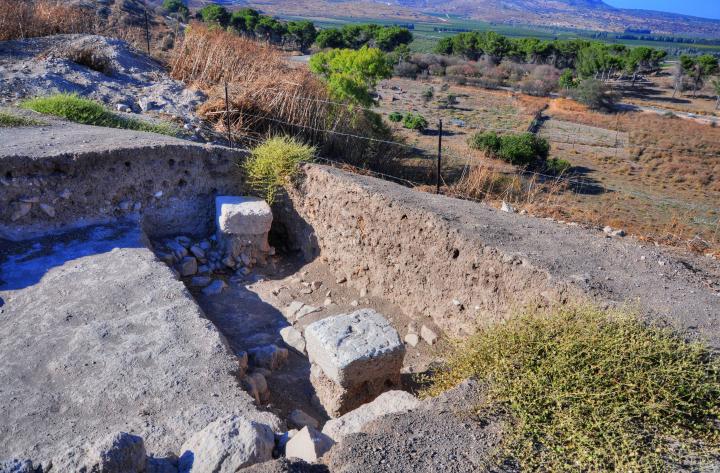 This area on the north-east side of the building was probably an entry court in the Persian period, but was filled in with small rooms in the Hellenistic period. 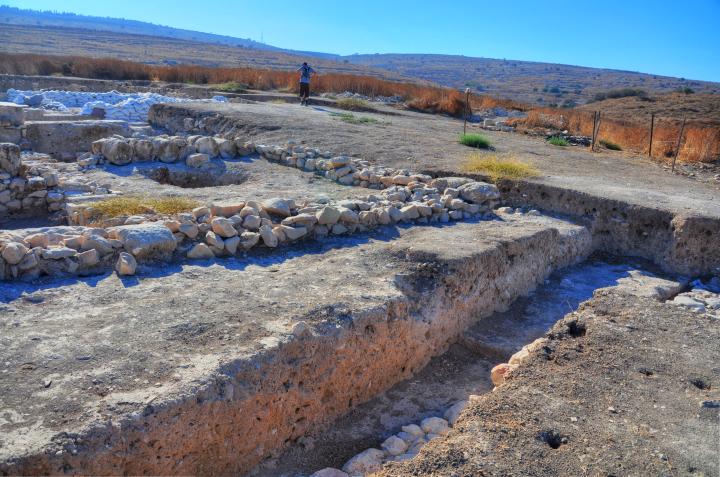 The photograph below shows fragments of re-used column drums in the wall. The column drums are left over from a large colonnaded entry way dating from the Persian period. 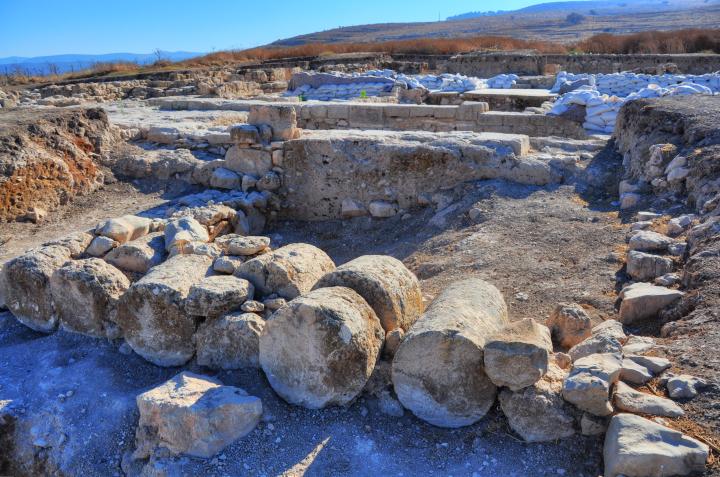 The western side of the PHAB building had ceremonial and administrative rooms in the middle and in the west side. Additionally, there were  storerooms here as well as the southwest and northwest corners. 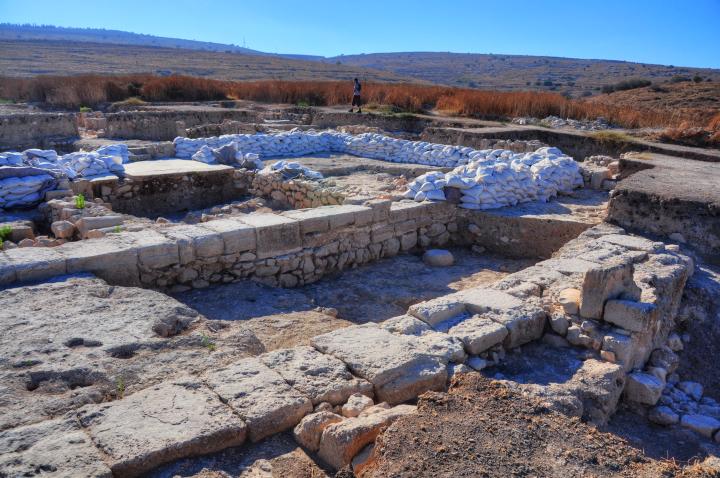 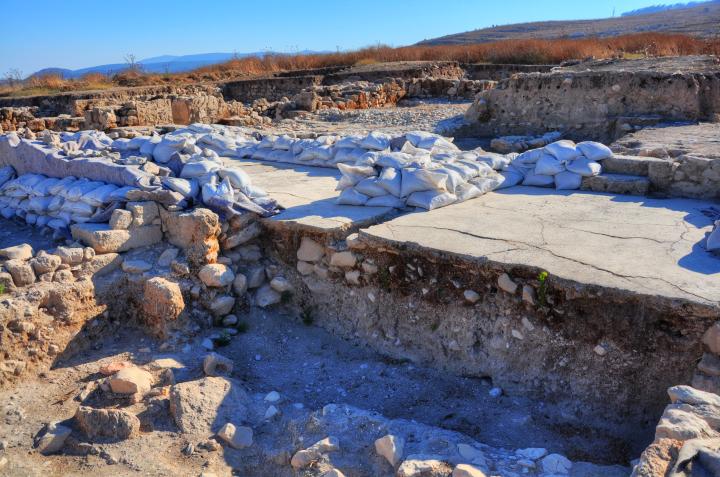 These rooms had plain white mosaic floors (two of which are preserved) and colorful painted plaster panels on the walls. 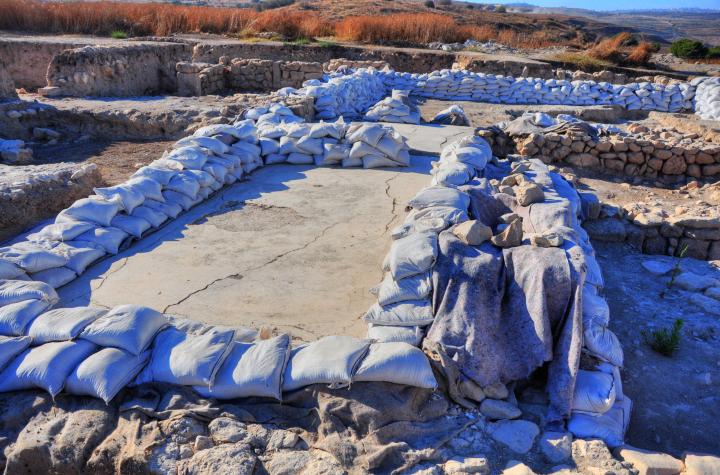 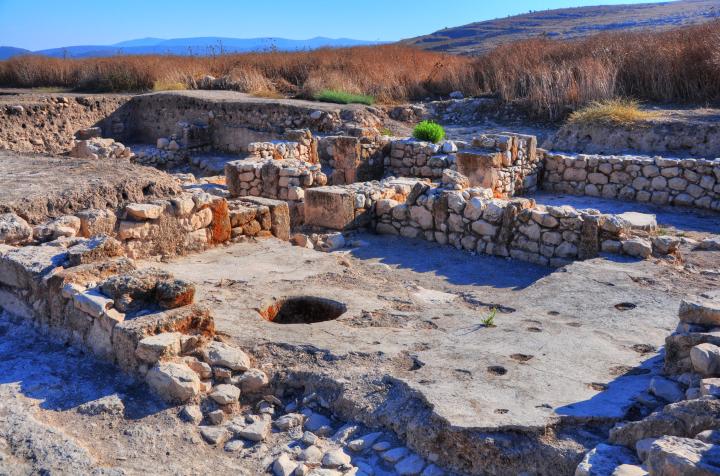 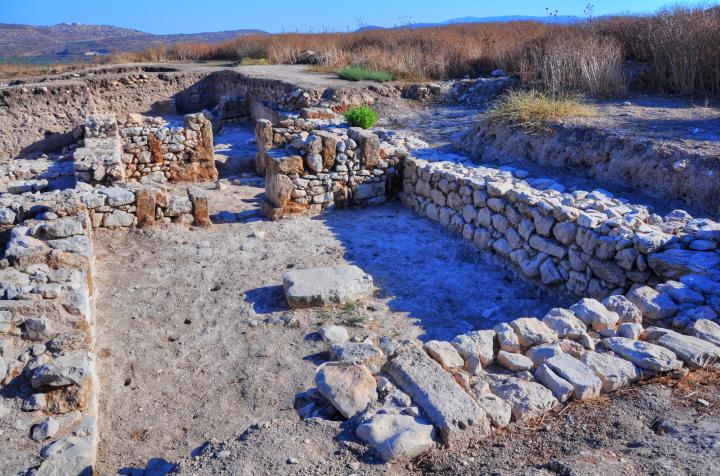 You can watch a short video  of the western side of the PHAB building. (due to its size,  7MB, it may take some time to download, and the screen will be black until the file is downloaded) 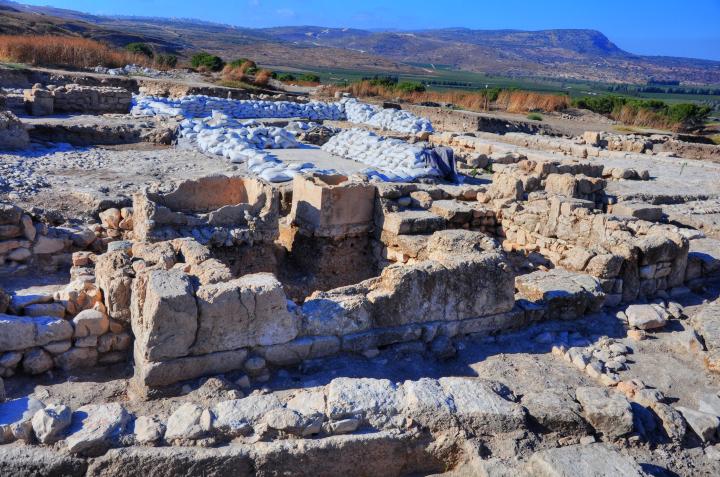 A close-up of one of the plastered bins that has a drainage hole in one corner and so was likely used to store liquids. 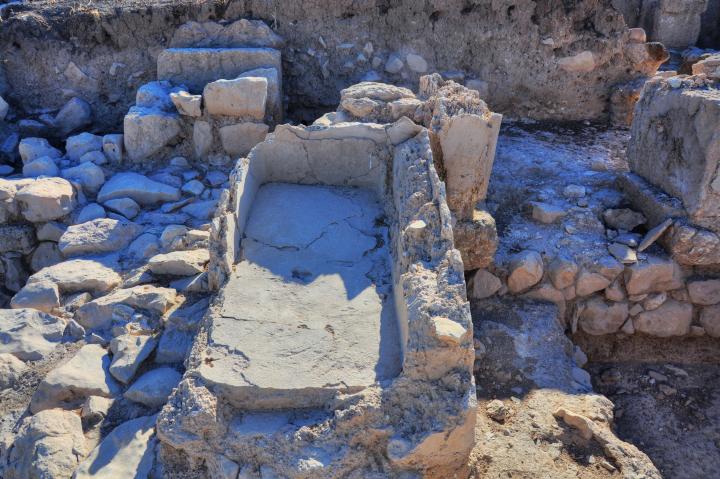 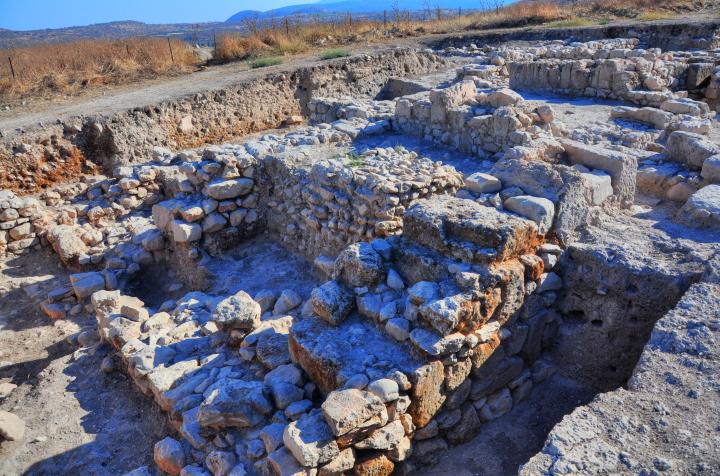 A section of the east wall of the building: 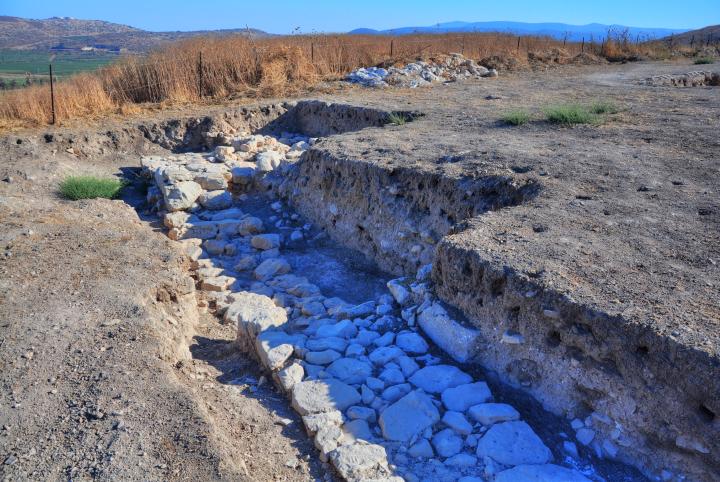 You can watch a short video  of the eastern side of the PHAB building. (due to its size,  3MB, it may take some time to download, and the screen will be black until the file is downloaded) 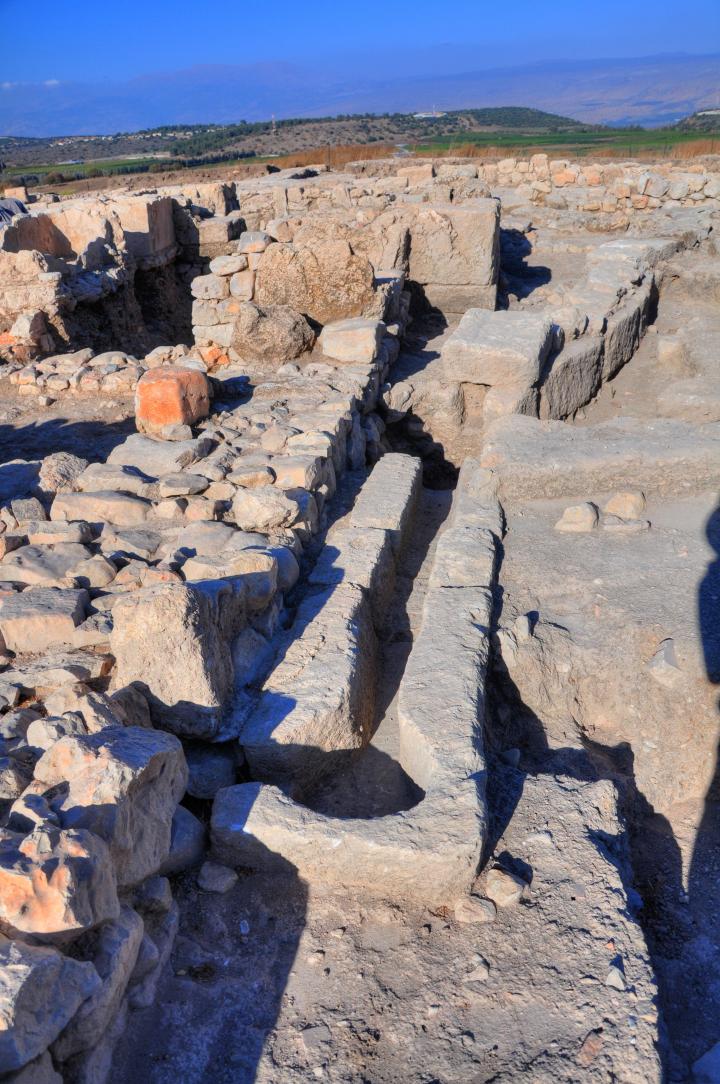 The water runs inside a covered channel along the walls of the eastern section, turning around the corner of the room. 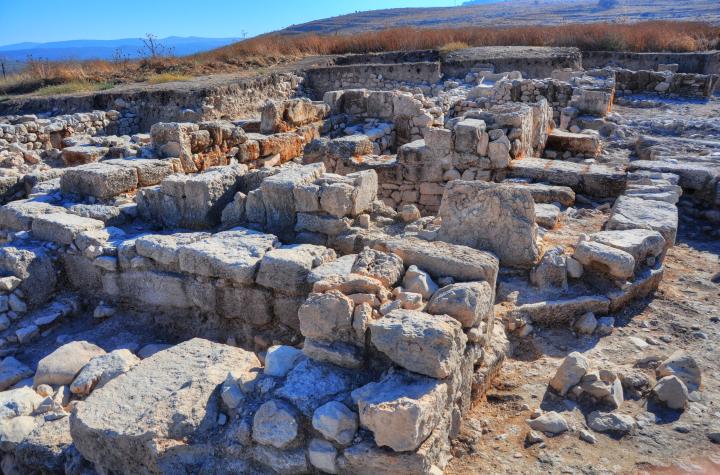 The covered water channel then continues to the south of the building: 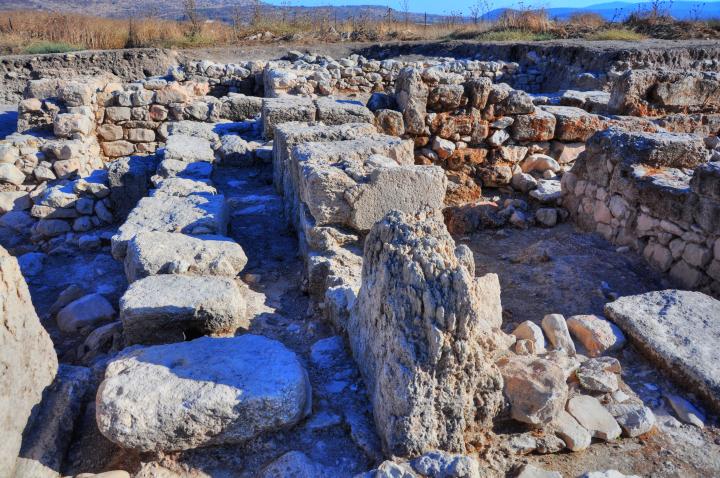 The water channel finally runs to the edge of the mound. 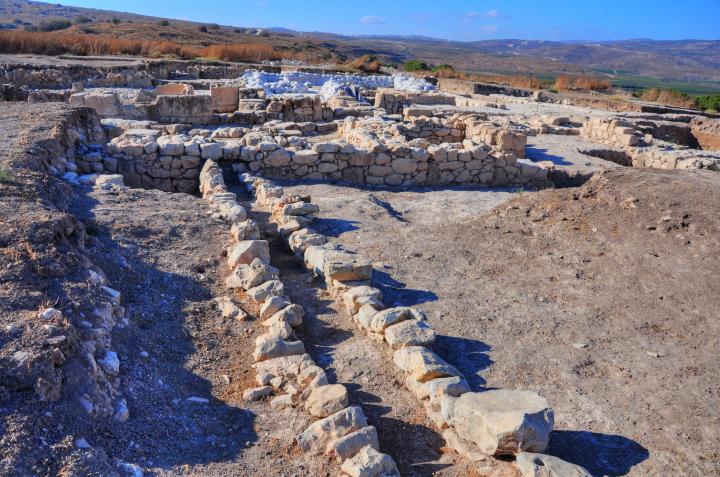 An aerial view of the north mound is seen here, as captured on Dec 2014 from the southern side.

Bases of structures are visible on the summit. On the far northeast side of the summit is an Arab cemetery. 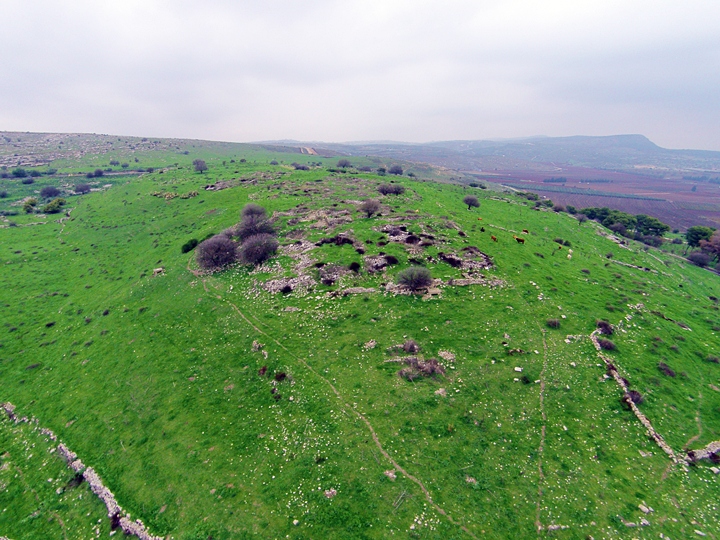 The northern mound is not yet excavated. Traces of ruins are seen around the hill, such as in the view below towards the north side. 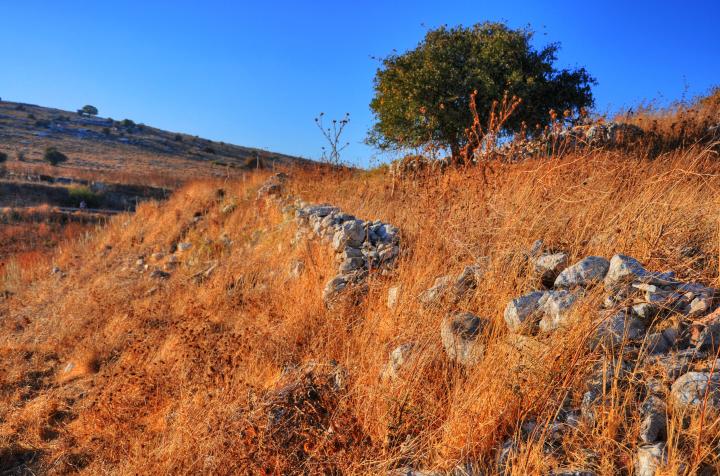 Another view towards the south-east, with the Kedesh valley in the background. 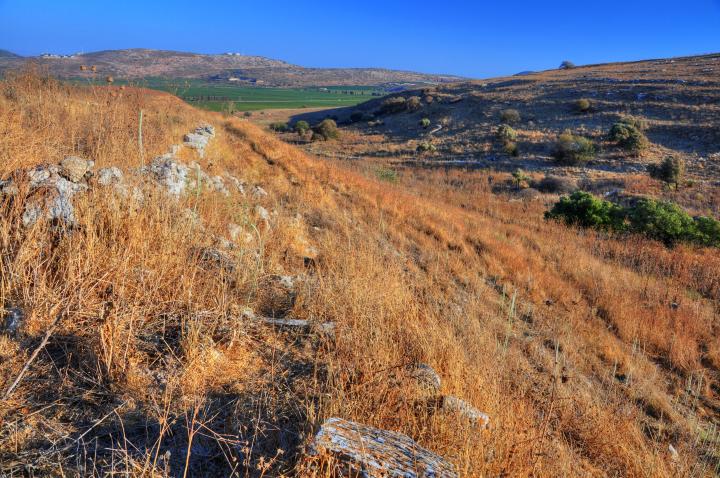 The eastern side of the northern mound is close to the Kedesh spring (it starts behind the ruins on the right). Perhaps, the spring's waters were concealed inside the walls of the ancient site, just like the water systems in Megiddo and Hazor. 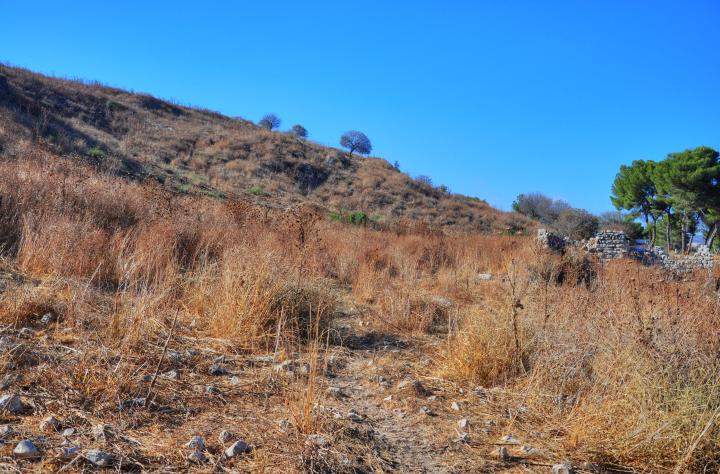 * Names of the city: