Kh. Harithiya is a large Hellenistic and Roman period city, located near Kibbutz Shaar Ha'amakim It is identified as "Geva" or "Gaba".

Josephus Flavius (Wars 3: Chapter 3: 1): "Gaba, which is called the City of Horsemen, because those horsemen that were dismissed by Herod the king dwelt therein;"

Khirbet Harithiya was a large city  in the Hellenistic and Roman periods. The site is identified as "Geva Parashim" or "Gaba" or "City of Horsemen", based on Josephus Flavius 's description.

Khirbet Harithiya (Arabic for : "ploughed land") is located near Kibbutz Sha'ar Ha'amakim ("the gate to the valleys").

This aerial map provides a close up on the main area of Khirbet Harithiya, on the north-west side of the Kibbutz. The site is located on a hill (100M), surrounded by valleys on 3 sides. As seen on the photo, there are traces of ancient walls around the site. The road from the south side entered through the city gates, and traces of them can be seen at that point. 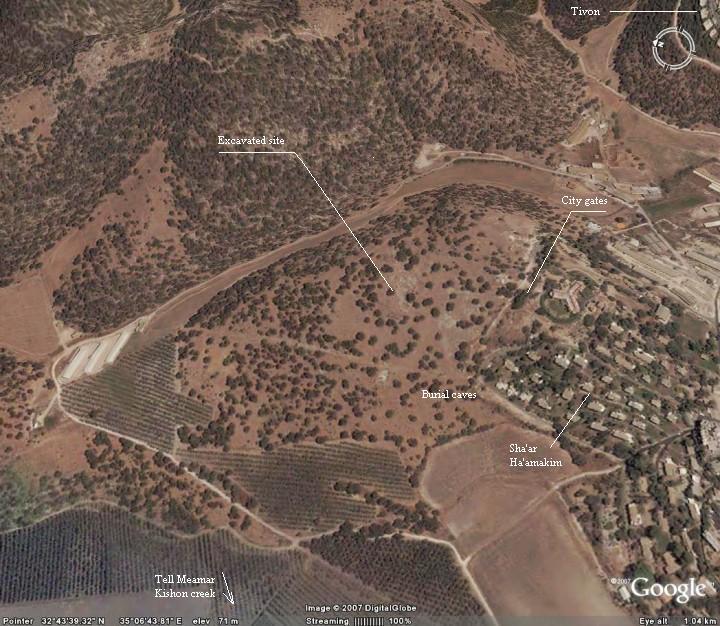 The city first started in the late Bronze period in Tell Meamer (el-Amar), located 1.5KM to the east, just behind the Kishon river. The city is identified as "Geva Shemanim".  Later, the city on the Tell gradually became a minor site and finally abandoned, since it was too small for the larger population.

Note that there are debates among scholars on the location of Geva during the Hellenistic period. Some rely on Josephus description, which makes Khirbet Harithiya the best candidate. However, there are other opinions - check the references.

The new site continued to grow in the Roman period.  The new city was the place where King Herod resettled his retired Horsemen. It is called also as Geva-Parashim (the latter means "horsemen"). It is described by Josephus Flavius (see below). The city was probably given to him by Augustus in 30BC after his victory over Marc Anthony  and Cleopatra, in addition to Jaffa and other coastal cities.

In the Jewish revolt (summer of 66) the Jewish mob attacked the Roman military unit in the city.

The area around the valley was  examined in the Palestine Exploration Foundation (PEF)  survey (1866-1877) by Wilson, Conder and Kitchener. This area appears in the center of the section of the map of 1878 (below). As seen, the site is located on crossroads of ancient highways: an east going road  (marked by a double dashed line) traverses the site on the way to Nazareth and beyond. Another road connects North  via Acre, to South via Yokneam. These gave the site a strategic importance.

During the World war I (1916-7) the Turks had an army base that dug into the hills of Harithiya, since they anticipated that the British will advance through the Kishon valley just below the site.

Today Khirbet Harithiya  is in ruins. It was excavated by Prof. Arthur Segal of the Haifa University.

South-east to it is Kibbutz of Sha'ar Ha'amakim, established in 1935 by Zionist pioneers from Yugoslavia.

A drone view from the east side of the site is seen below. The ruins of the site are scattered on the hill, with a small section excavated in the center.

In the left background is Mt Carmel, with the Biblical mound of Tell Mea'mer in front its foothills. 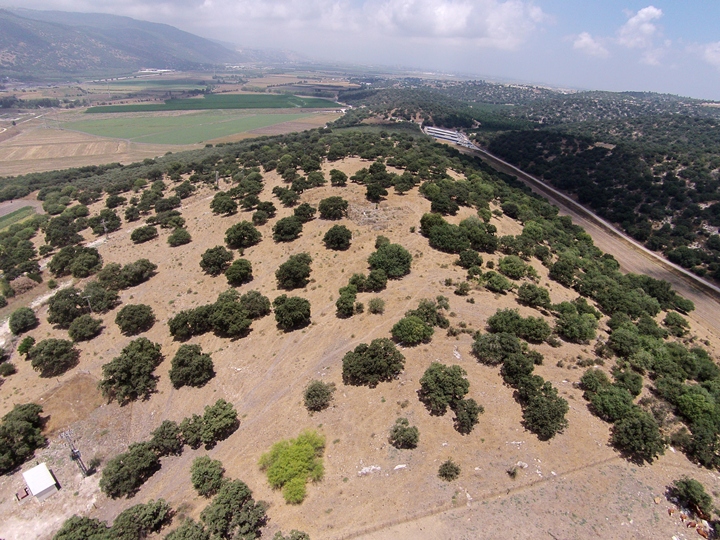 The photo below, towards the west, shows the area of Khirbet Harittiya,  which is in ruins and buried under the hillside among the oak trees. In the far background is the northern slopes of Mount Carmel, and in the near background is Tell Meamar (el-Amar), which predated the site. 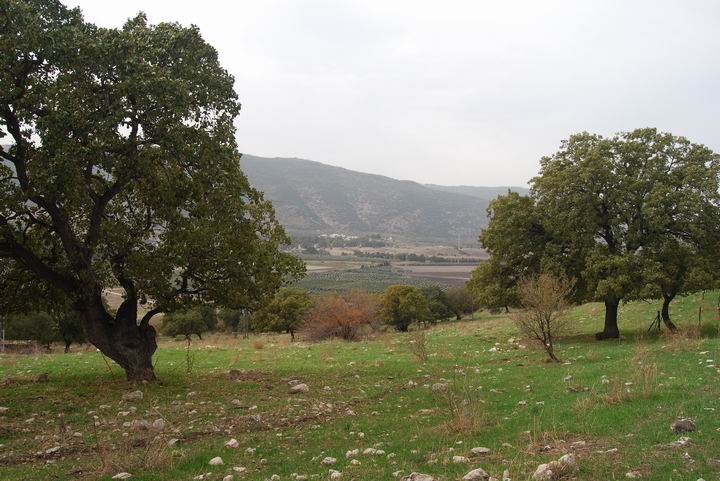 A view towards the south shows the west side of Kibbutz Sha'ar Haamakim. Some parts of the ancient site are buried under the houses on that southern side. 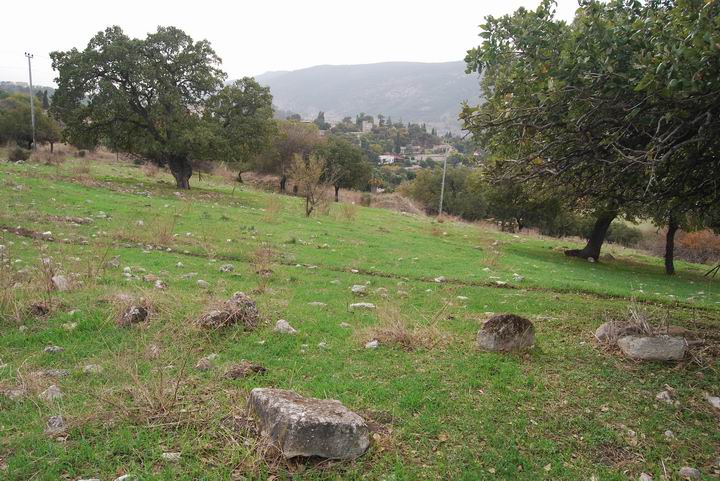 A wide panoramic picture of the area around the site is seen in the photo below.

(c) The excavated area - South side

The next photos show the site from the south side. The excavation unearthed a Hellenistic structure on a hill on the north-west side of the Kibbutz.

*** The information is preliminary - we will add more data on this excavation. 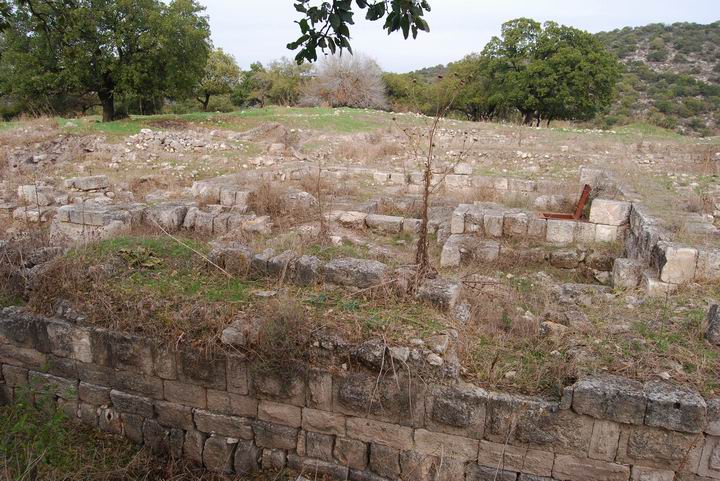 Another view towards the north-east. 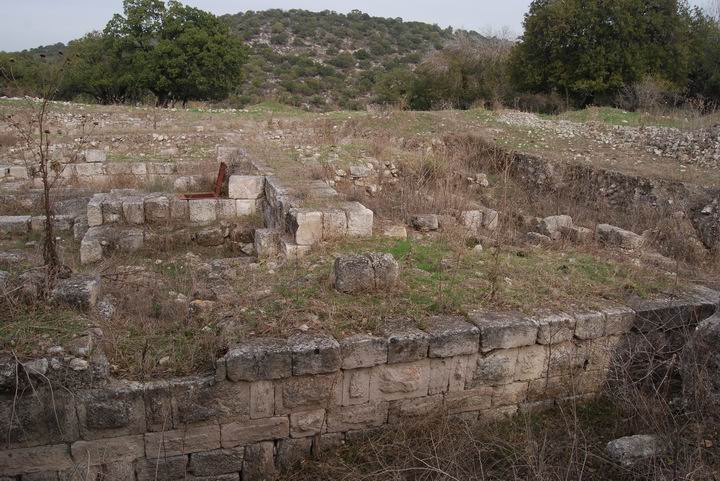 A view from the west side towards the north-east. 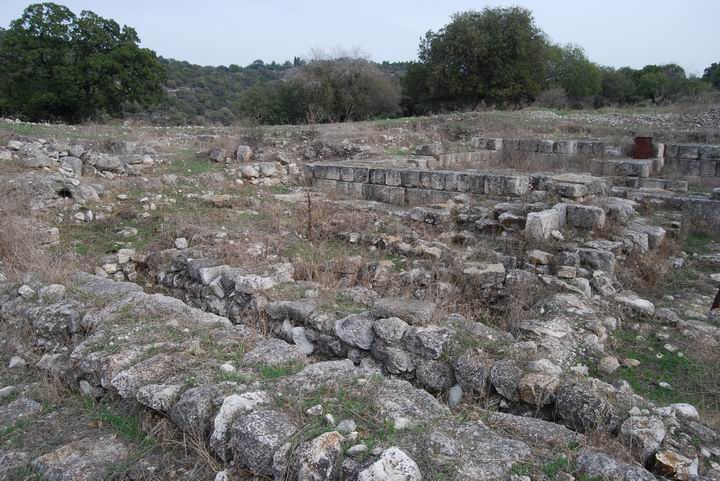 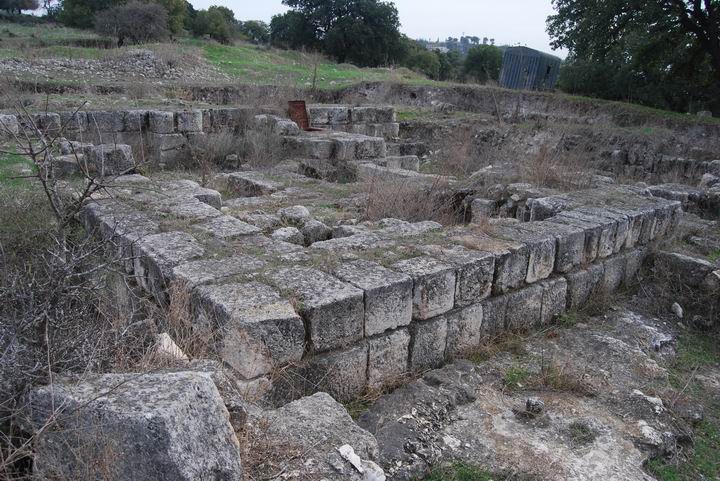 Stairs lead down to a pit located under the structure, under the rusting cover that is seen in the upper photo. 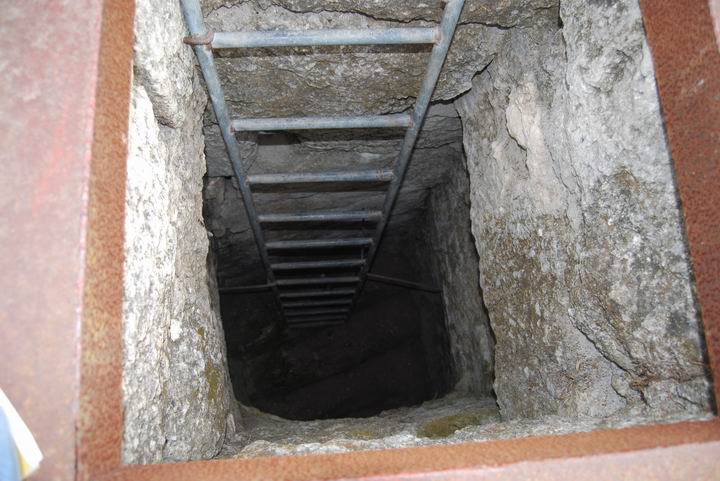 (e) The excavated area - West side

A view towards the west. A second hole and ladder is located at this point. 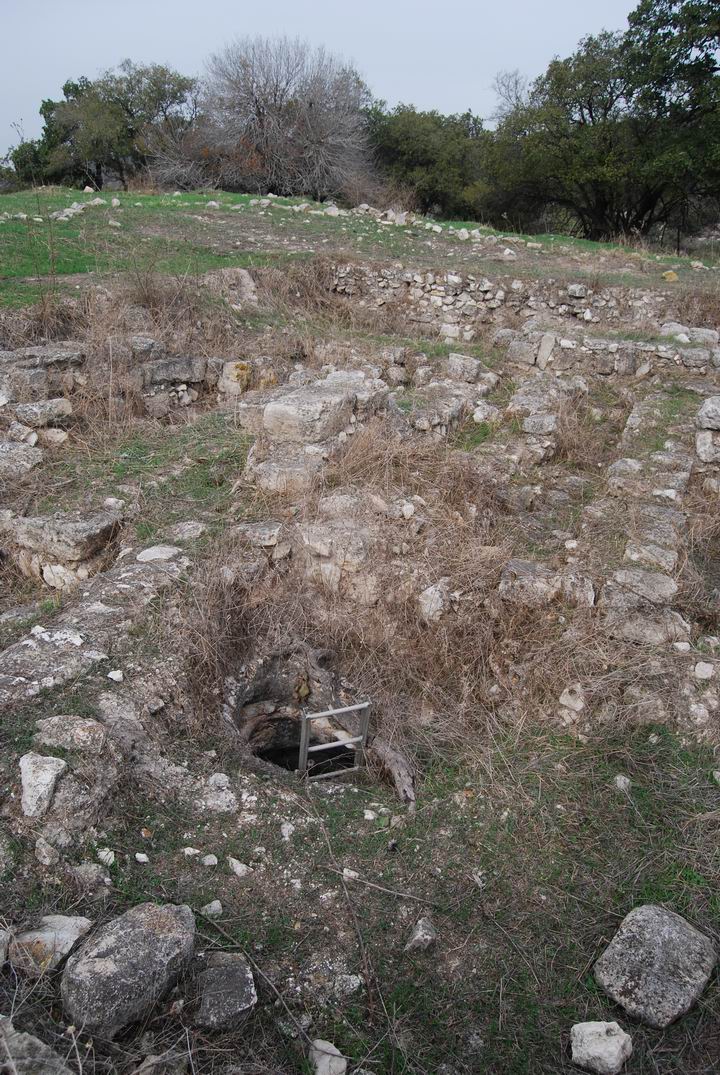 Another view towards the west. 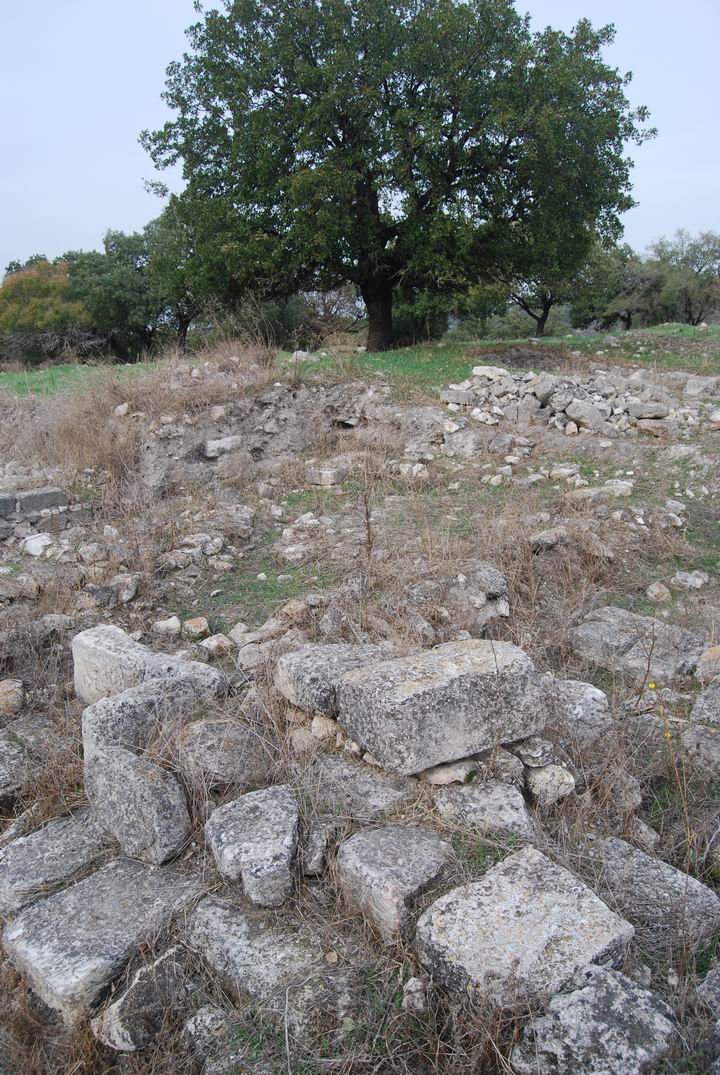 The south-west corner of the excavation, with a view of Mount Carmel in the background. 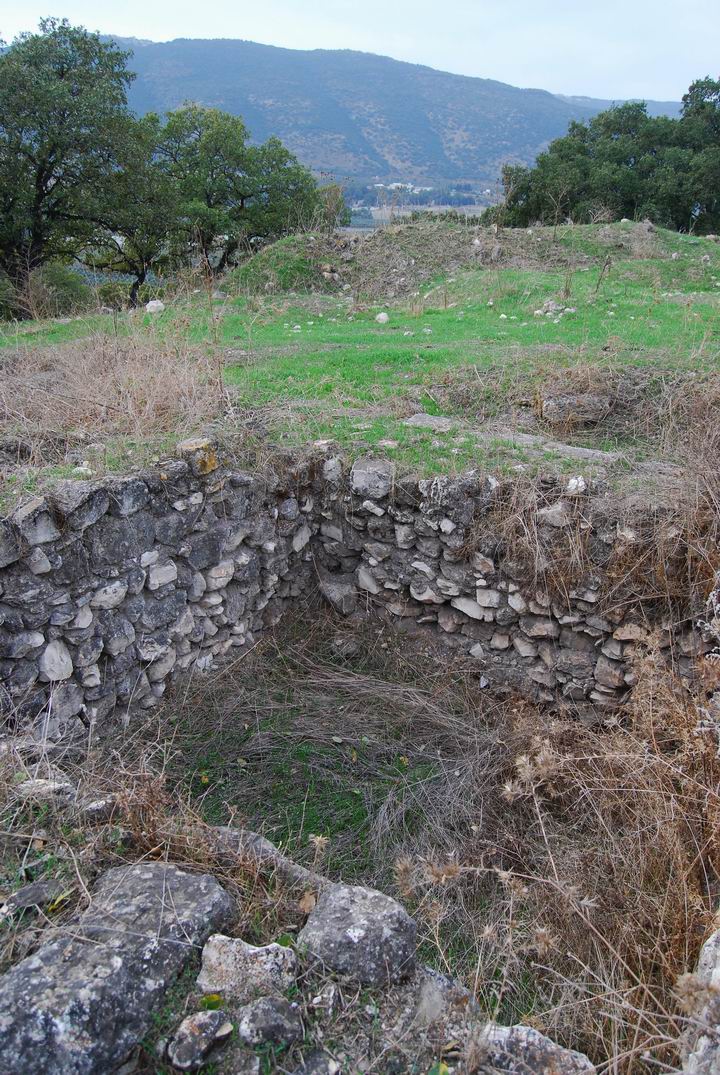 In this text the Historian (ex-commander of the Galilean Jews against the Romans) describes the new city of Geva (Gaba) which is where King Herod (37BC-4BC) resettled his retired horsemen.

Now Phoenicia and Syria encompass about the Galilees, which are two, and called the Upper Galilee and the Lower. They are bounded toward the sun-setting, with the borders of the territory belonging to Ptolemais, and by Carmel; which mountain had formerly belonged to the Galileans, but now belonged to the Tyrians; to which mountain adjoins Gaba, which is called the City of Horsemen, because those horsemen that were dismissed by Herod the king dwelt therein; they are bounded on the south with Samaria and Scythopolis, as far as the river Jordan; on the east with Hippeae and Gadaris, and also with Ganlonitis, and the borders of the kingdom of Agrippa; its northern parts are hounded by Tyre, and the country of the Tyrians. As for that Galilee which is called the Lower, it, extends in length from Tiberias to Zabulon, and of the maritime places Ptolemais is its neighbor; its breadth is from the village called Xaloth, which lies in the great plain, as far as Bersabe, from which beginning also is taken the breadth of the Upper Galilee, as far as the village Baca, which divides the land of the Tyrians from it; its length is also from Meloth to Thella, a village near to Jordan.

When the Jewish revolt started in 67AD, the Jewish rebels attacked several cities, including Geva (Gaba) where a Roman unit was positioned (as per the next text).

Now the people of Cesarea had slain the Jews that were among them on the very same day and hour [when the soldiers were slain], which one would think must have come to pass by the direction of Providence; insomuch that in one hour's time above twenty thousand Jews were killed, and all Cesarea was emptied of its Jewish inhabitants; for Florus caught such as ran away, and sent them in bonds to the galleys. Upon which stroke that the Jews received at Cesarea, the whole nation was greatly enraged; so they divided themselves into several parties, and laid waste the villages of the Syrians, and their neighboring cities, Philadelphia, and Sebonitis, and Gerasa, and Pella, and Scythopolis, and after them Gadara, and Hippos; and falling upon Gaulonitis, some cities they destroyed there, and some they set on fire, and then went to Kedasa, belonging to the Tyrians, and to Ptolemais, and to Gaba, and to Cesarea; nor was either Sebaste [Samaria] or Askelon able to oppose the violence with which they were attacked; and when they had burnt these to the ground; they entirely demolished Anthedon and Gaza; many also of the villages that were about every one of those cities were plundered, and an immense slaughter was made of the men who were caught in them.

In this text the Commander talks about his acts during the preparations to the revolt (66-67AD). In this text he actually describes the range from Gibea (Geva) to Beit-Shearim (Besara) - 20 furlongs (4KM), which is the location of Kh. Harithiya. This is an important identification hint for the site which were used by the scholars.

"Now king Agrippa sent an army to make themselves masters of the citadel of Gamala, and over it Equieulus Modius; but the forces that were sent were not allow to encompass the citadel quite round, but lay before it in the open places, and besieged it. But when Ebutius the decurion, who was intrusted with the government of the great plain, heard that I was at Simonias, a village situated in the confines of Galilee, and was distant from him sixty furlongs, he took a hundred horsemen that were with him by night, and a certain number of footmen, about two hundred, and brought the inhabitants of the city Gibea along with him as auxiliaries, and marched in the night, and came to the village where I abode. Upon this I pitched my camp over against him, which had a great number of forces in it: but Ebutius tried to draw us down into the plain, as greatly depending upon his horsemen; but we would not come down; for when I was satisfied of the advantage that his horse would have if we came down into the plain, while we were all footmen, I resolved to join battle with the enemy where I was. Now Ebutius and his party made a courageous opposition for some time; but when he saw that his horse were useless to him in that place, he retired back to the city Gibea, having lost three of his men in the fight. So I followed him directy with two thousand armed men; and when I was at the city Besara, that lay in the confines of Ptolemais, but twenty furlongs from Gibea, where Ebutius abode, I placed my armed men on the outside of the village, and gave orders that they should guard the passes with great care, that the enemy might not disturb us until we should have carried off the corn, a great quantity of which lay there: it belonged to Bernice the queen, and had been gathered together out of the neighboring villages into Besara; so I loaded my camels and asses, a great number of which I had brought along with me, and sent the corn into Galilee. When I had done this, I offered Ebutius battle; but when he would not accept of the offer, for he was terrified at our readiness and courage, I altered my route, and marched towards Neopolitanus, because I had heard that the country about Tiberias was laid waste by him. This Neopolitanus was captain of a troop of horse, and had the custody of Scythopolis intrusted to his care by the enemy; and when I had hindered him from doing any further mischief to Tiberias, I set myself to make provision for the affairs of Galilee".

Other ancient sites close to Geva: