The gate is located on the east side of the old city, leading to the temple, and regarded as the Holiest gate for all faiths. The gate was built in the 6th/7th C AD over the ruins of an ancient gate,  and was sealed since the 16th C. 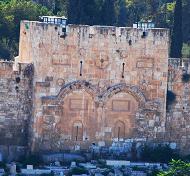 Ezekiel 44 2: "This gate shall be shut, it shall not be opened, and no man shall enter in by it; because the LORD, the God of Israel, hath entered in by it, therefore it shall be shut".

The Golden gate is located on the east walls of the old city of Jerusalem, leading to the temple mount. It is regarded as a Holy site for all faiths - Jewish (arrival of the Messiah) and Christian (entrance of Jesus on Palm Sunday) and Muslim (site of future resurrection).

The gate was built in the 6th/7th C AD over the ruins of the second temple  gate,  and sealed since the 16th C.

The aerial map shows the 8 gates of Jerusalem, with the Golden gate on the right (east side), facing the Kidron valley and Mount of Olives. These are the gates, listed clockwise starting from the west corner:

A gate was located on the eastern side of King Solomon's temple (10th C BC), and called the "east gate" ("Kadim" in the Hebrew Bible). Its location was probably at the vicinity of the Golden gate, inside the temple.

The Shushan gate was destroyed by the Romans during the destruction of the temple in 70AD.

According to Jewish tradition, the Messiah will enter through the gate riding on a white donkey.     Ever since the destruction of the temple the Jews pray here to rebuild the gate and allow the spirit of God to return to the city, and the Messiah to pass the gate, asking for mercy and revival of the gate (hence the Jewish name of the gate: Sha'ar Harachamim - Gate of the Mercy).

According to Christian religion, Jesus is the Messiah; according to tradition, he entered through the Golden gate on the Sunday before Passover  ("Palm Sunday") riding on a donkey, an event that further angered the Jewish leaders and eventually led to the crucifixion several days later. 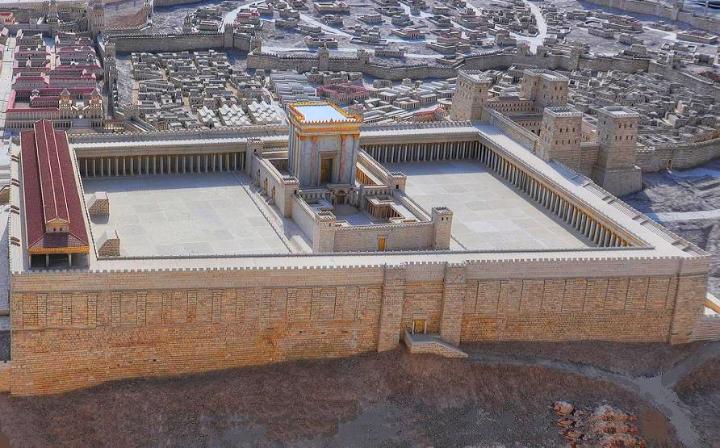 East of the temple mount, with Golden gate in the center. (part of Jerusalem Museum's model of the city of Herod)

A new gate was built over the ruins of the ancient gate in the 6th by the Byzantines (or in the 7th C by the Arabs). This makes the Golden gate the oldest gate in the present walls.

After the defeat of the Persians (629-630AD) the Byzantine emperor Heraclius entered, barefoot as a Christian pilgrim,  through the gate with the remains of the true cross, which he recovered from the Persians and returned to the Church of Holy Sepulchre. This event is ever since celebrated as the Elevation of the Holy Cross celebration, in different dates (March 21, September 14, and other dates).

In the 6th/7thC Byzantine map from Madaba, the eastern gate is shown in the top center (eastern side in the ancient map), and is circled in yellow. It is seen connected by a street to the secondary Cardo. 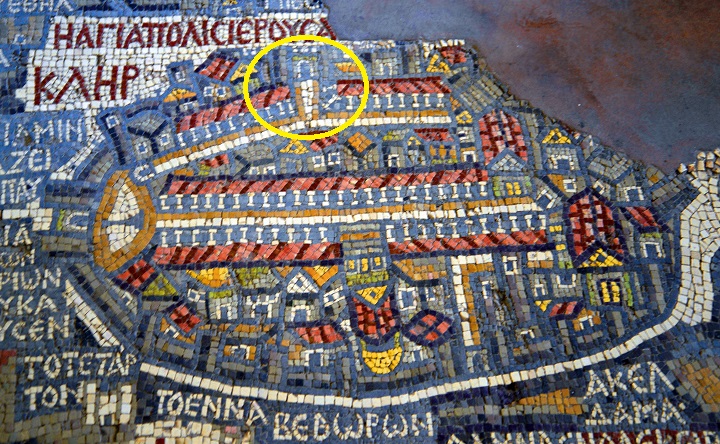 The Golden gate was opened twice a year - on Palm Sunday and on the Holy Cross celebration in March. After their defeat in 1187, the gate remained closed.

The Ottomans built the present walls of Jerusalem in 1540. However, they sealed the Golden gate in 1541 AD in order to prevent the Messiah's entrance, which according to the Jewish tradition will enter this gate. A cemetery was built in front of it, outside the walls, as part of the concept that the Messiah will not pass through a cemetery.

A view from the east is seen below, with the sealed Golden gate in its center, and the Golden Dome of the Rock to its left. This photo was taken from the foothills of Mount of Olives, across the Kidron valley. 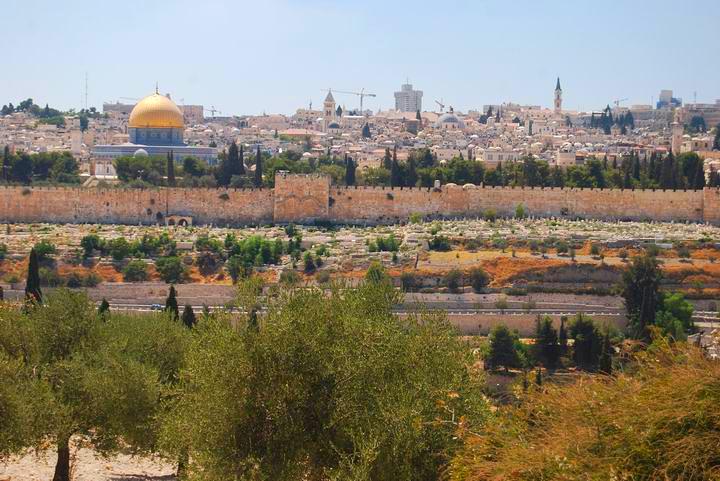 The Golden gate is shown in a closer view: 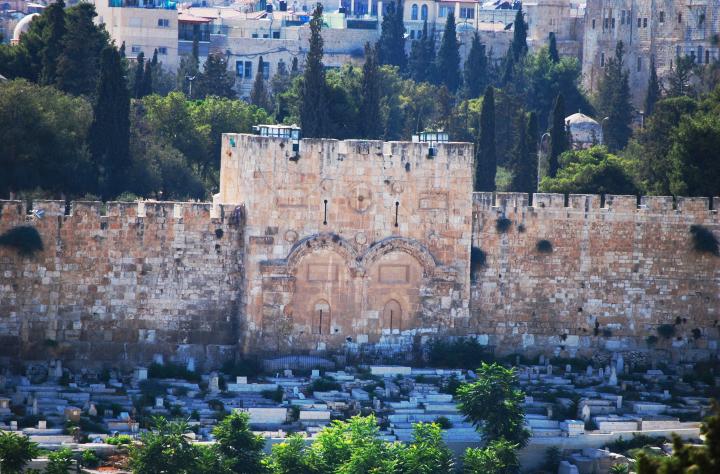 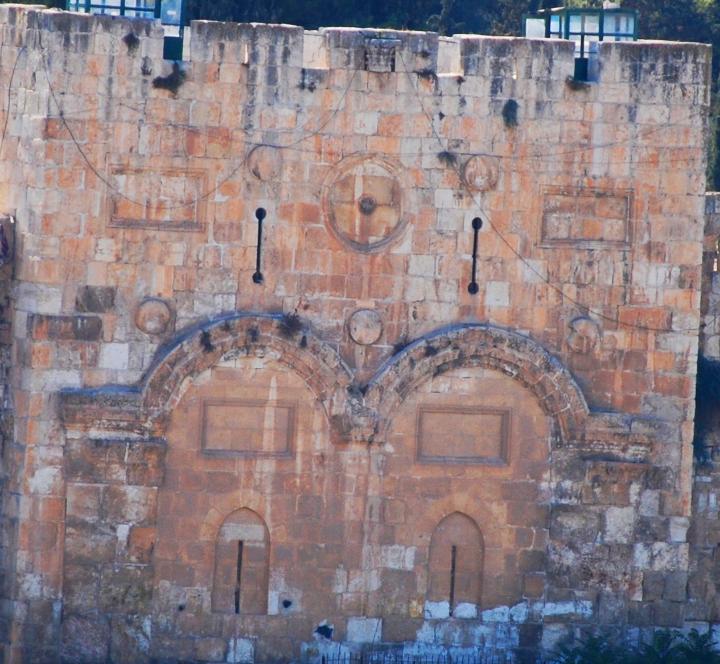 The western side of the gate is visible from the temple mount. A large gate house, dated to the end of the Byzantine period, protects the gate. The following picture is a view from the south-west side. 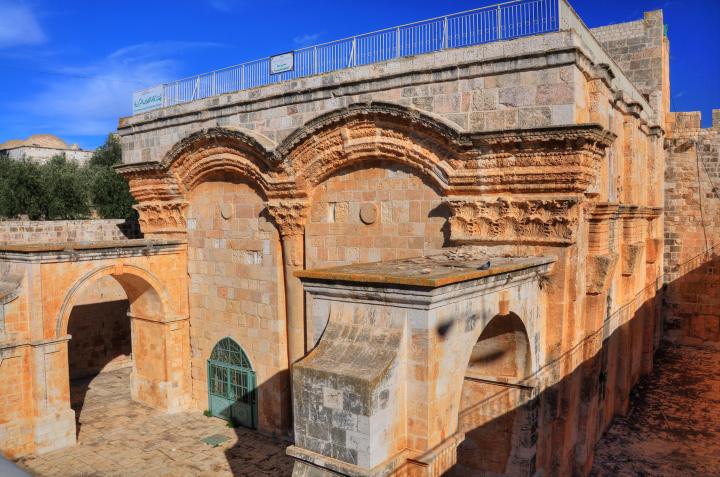 Another view below - from the north-west side. 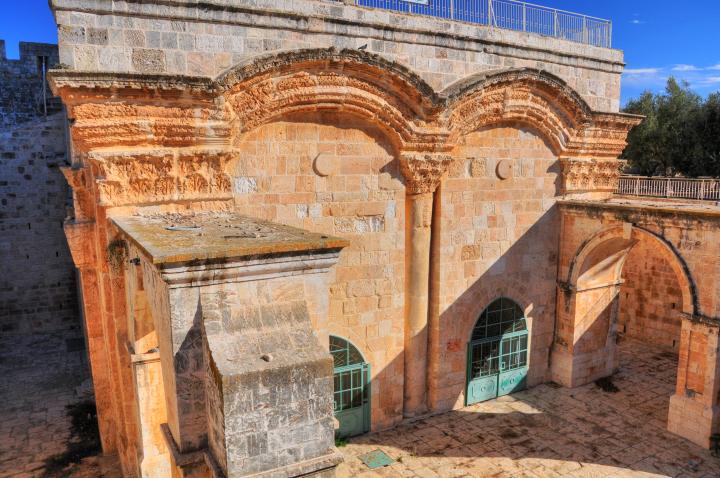 This text refers to the ancient tradition of the gate in the second temple, dated to the 6th C BC exile in Babylon. According to Ezekiel, God's spirit left the city through the gate, but will return after the Messiah will return through it.

Jesus entered to the temple through the Golden gate on Palm Sunday, chanting Psalms verses:

Another text about Jesus's entry:

"On the next day much people that were come to the feast, when they heard that Jesus was coming to Jerusalem, Took branches of palm trees, and went forth to meet him, and cried, Hosanna: Blessed is the King of Israel that cometh in the name of the Lord. And Jesus, when he had found a young ass, sat thereon; as it is written, Fear not, daughter of Sion: behold, thy King cometh, sitting on an ass's colt"

"Rejoice greatly, O daughter of Zion; shout, O daughter of Jerusalem: behold, thy King cometh unto thee: he is just, and having salvation; lowly, and riding upon an ass, and upon a colt the foal of an ass".

Another text of Jesus entering the city, chanting Psalms verses with his disciples:

"And they brought him to Jesus: and they cast their garments upon the colt, and they set Jesus thereon. And as he went, they spread their clothes in the way. And when he was come nigh, even now at the descent of the mount of Olives, the whole multitude of the disciples began to rejoice and praise God with a loud voice for all the mighty works that they had seen; Saying, Blessed be the King that cometh in the name of the Lord: peace in heaven, and glory in the highest.".

These are verses that Jesus and his disciples chanted while entering the temple thru the Golden Gate:

BibleWalks.com - enter the gates of Jerusalem