A 5th century AD monastery in Mishor-Adummim, on the road from Jerusalem to Jericho and the Jordan valley. It was founded by the hermit Euthymius "the Great" in 428AD as a Laura (or Lavra - a monastery of hermits, with small cells). In 482, after the death of the founder, it changed to a larger, communal form (Coenobium - a walled monastery).  Recent excavations restored the large monastery and its immense water supply complex, making it an attractive and accessible archaeological site which sheds light on the Judean desert monasticism.

The site is located in Mishor-Adummim, the industrial park near Ma'ale Adummim, east of Jerusalem. It is at an altitude of 240m above sea level. The monastery is located 2km south of the ancient road from Jerusalem, and served as a road station.

An ancient access road to the monastery, which used to connect to the Jerusalem road, is now gone. It followed a course from a north-west junction (seen on the top-left side of the map). A tower ("Qasr el-Khan" - fortress of the inn) was located along the access road, about 300m NW of the monastery, but it too was demolished during the development of the Industrial park. 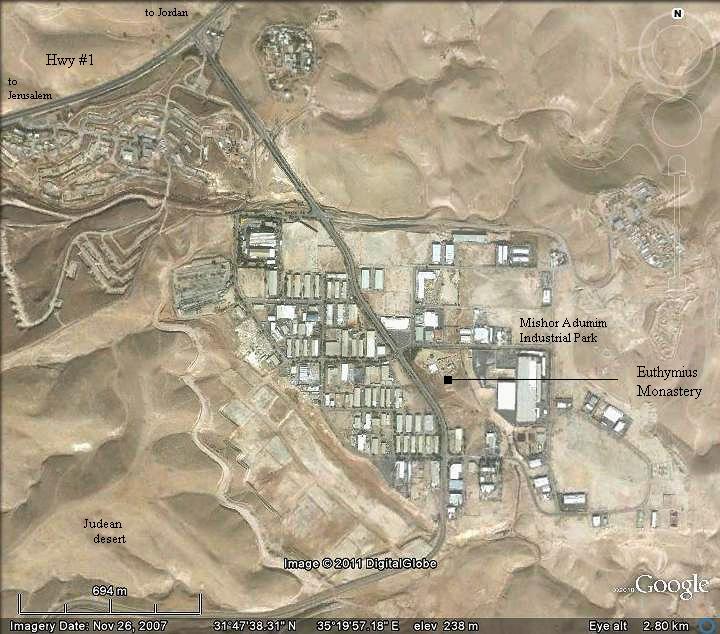 The monastery was not damaged by the 638 century Islamic conquest, unlike most of the Christian sites. However, it was severely damaged in the 659 earthquake, and most of it was rebuilt within several years.

During the Islamic period, the monasteries in Judean desert were frequently attacked. In 809 this monastery, as well as others, was plundered, resulting in a severe damage. The monastery was finally destroyed in the 12th C.

Some parts of it were repaired during the Crusaders period (13th century), but it survived only until the Mameluke period (13th-16th century).

A plan of the monastery is shown below. The main entrance to the walled complex is from the north-west gate.

The hermit cells of the Laura were located outside the walled area. The Laura had a total of 12 cells, but only three were found at nearby locations (two cells are located 40m south of the southwest corner, and another cell 80m southeast of the southeast corner). Perhaps other cells are buried under the ruins.

You can press on any of the titles on the plan in order to jump to that section. 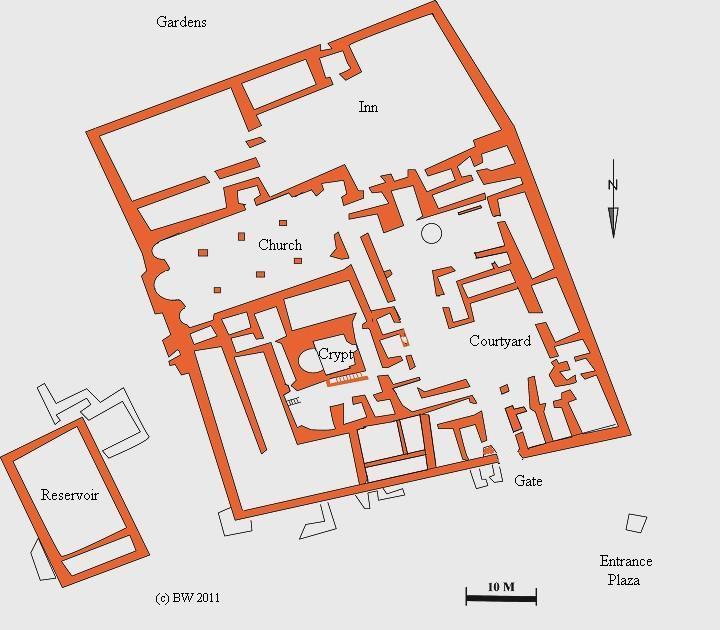 A drone view, with the west on the upper side, shows the  monastery complex from the bird's view. 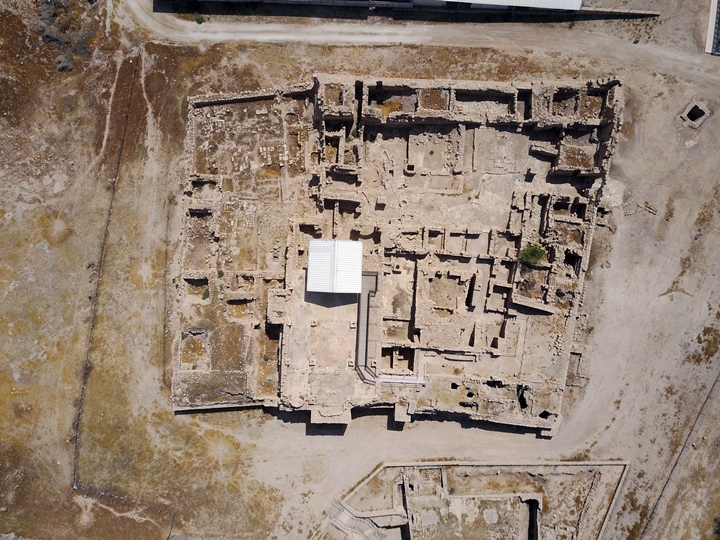 The major points of interest are marked on the aerial view. You can press on a yellow square to jump to the selected section in this web page. 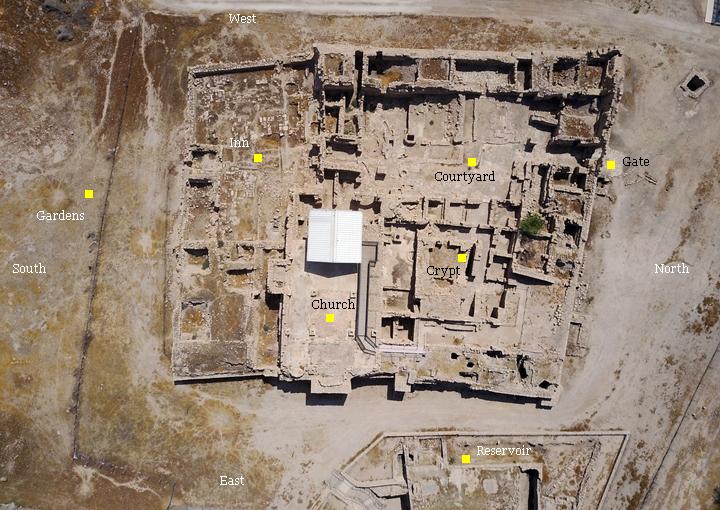 The northern and western walls of the monastery are seen in the picture. The wall, 6m high, encompasses an area of 54m by 65m, and provided protection for the monks. The arched entrance is located on the north side. 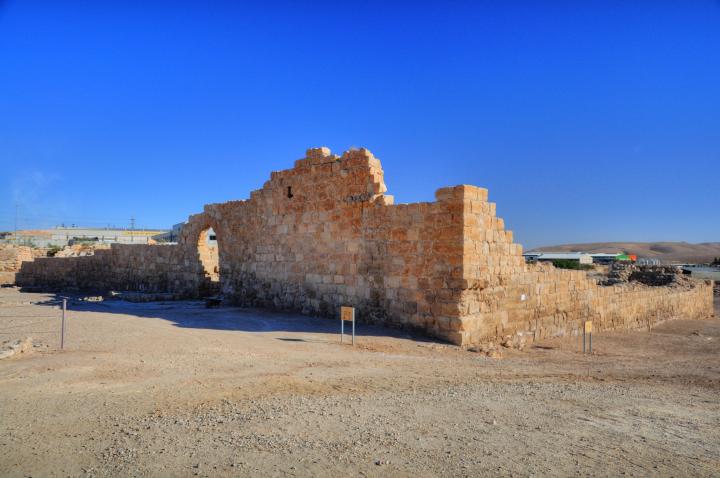 A section of the north wall, on the side of the gate, is in the following view. The cistern in front of the wall is part of the water system which was fed by a water channel from nearby cisterns. 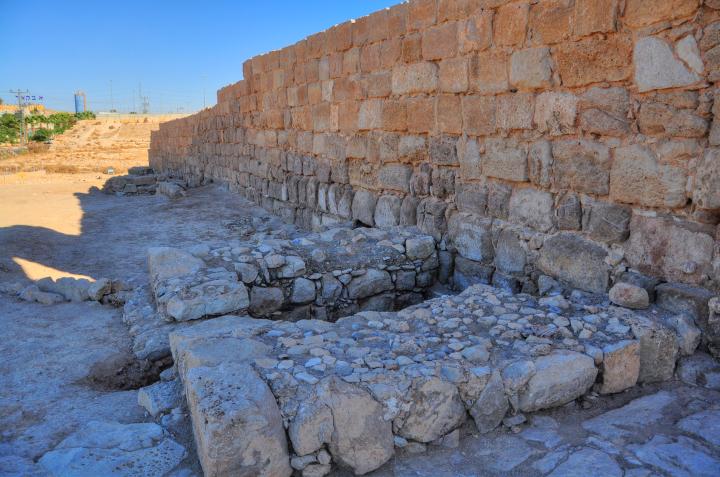 The next photo shows a section of the eastern walls. 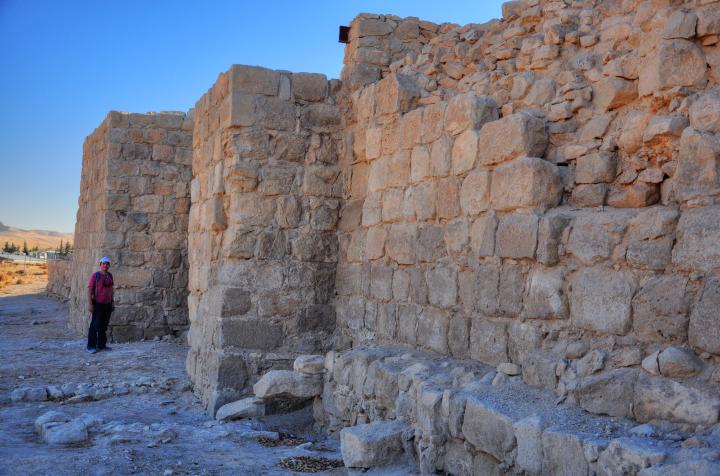 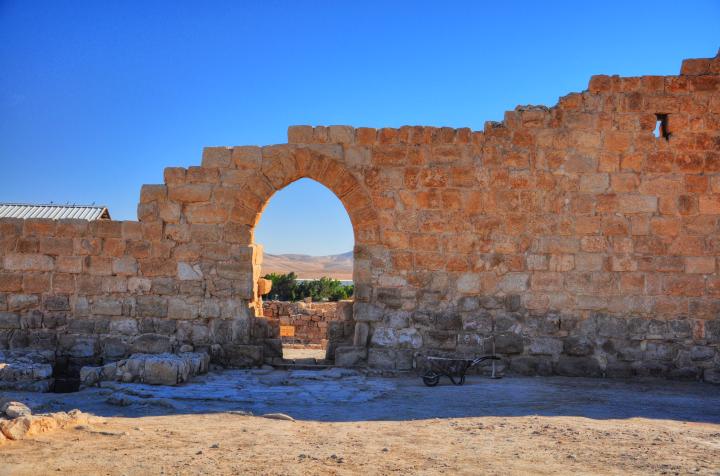 A view of the entrance, as seen from inside out, is in the next picture. It is evident from this side of the gate that the monks were well protected, and were capable to defend themselves against external attacks. After all, this remote area was not safe, and the hermits had to protect themselves. During times of raised security, the monks left the gate sealed, and used a wooden device on the north-west corner to raise supplies over the wall using a rope and basket. 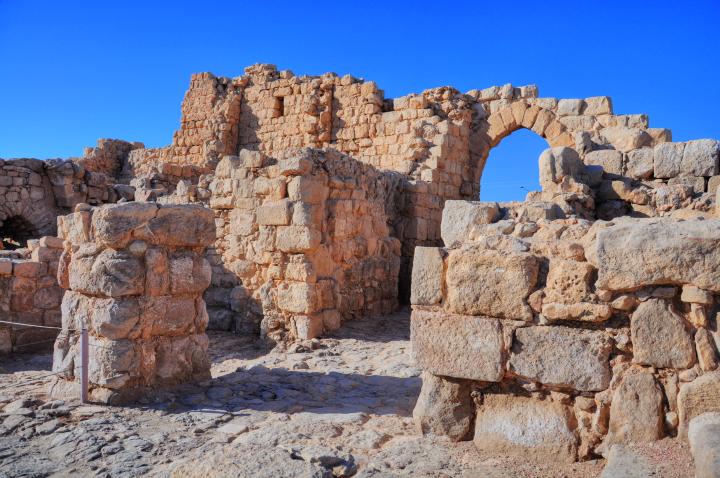 Behind the gate, on both sides, are storage rooms and chambers for the monks. 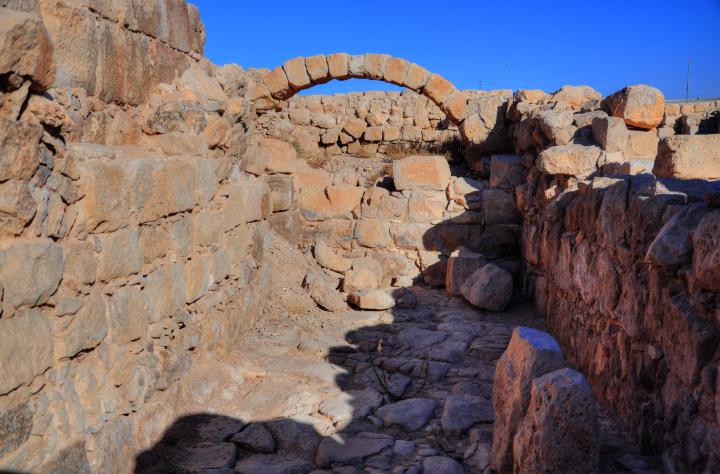 (d) Courtyard and Western side 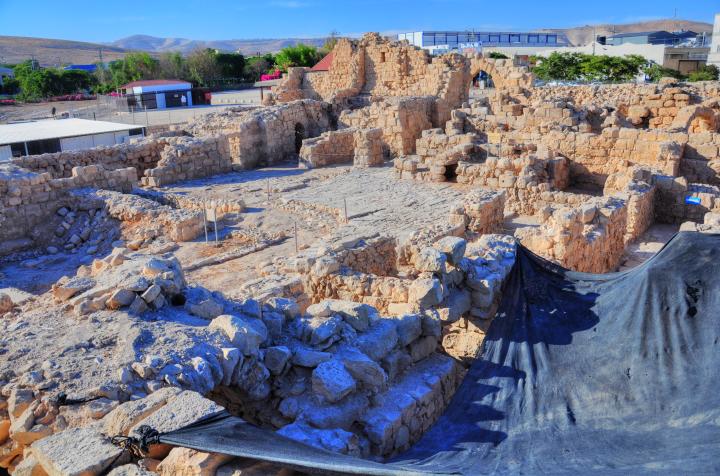 The next picture is a closer view of the floor of the main courtyard, as seen from the entrance. 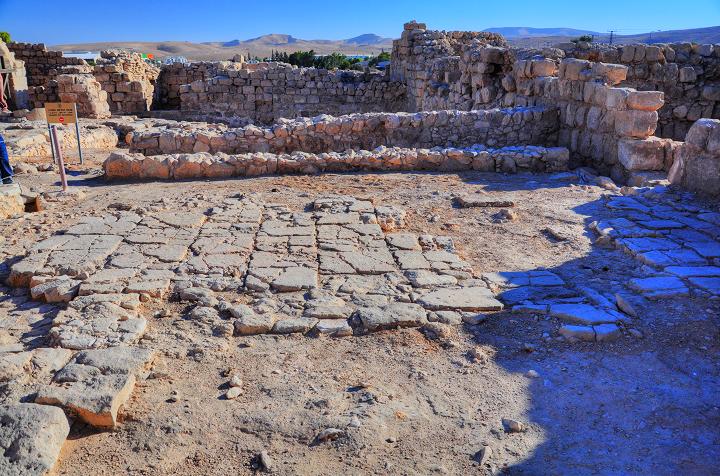 Behind this courtyard, further to the south, is another open section: 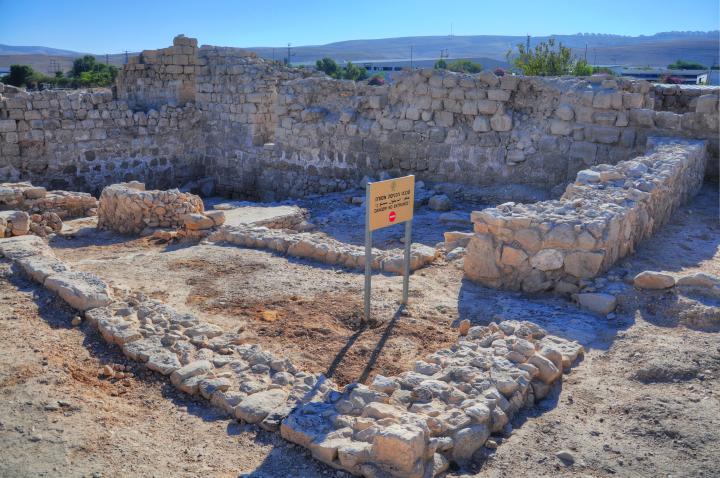 The next picture shows a western view towards this section, as seen from the top of the church: 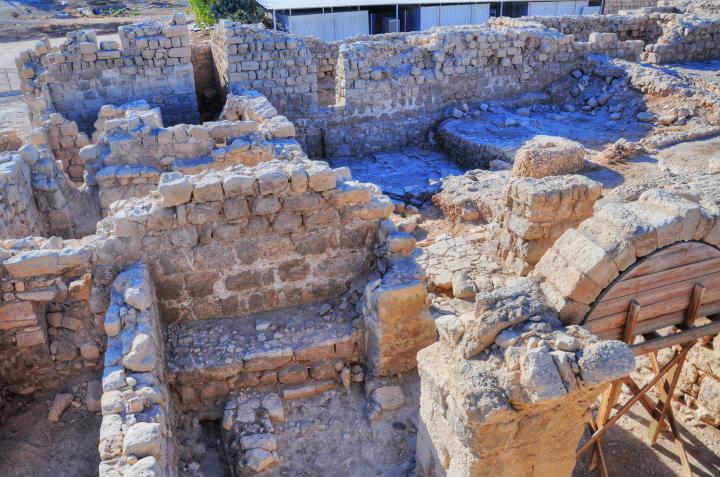 The entrance to this area is from an opening in the wall, behind the small room on the left in the picture below. 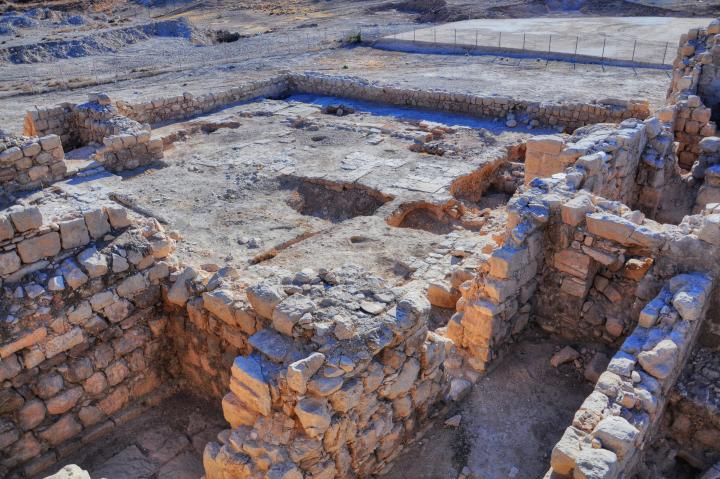 In the area south of the inn (seen in the top-left corner, and beyond) there are remains of  two large gardens. Their total area is 2500 m2, and they were surrounded by low walls. In these gardens the monks grew fruit trees and vegetables.  Beyond them, there are scarce remains of some of the hermits' cells which were part of the first stage of the monastery (the  Laura, 428-482). 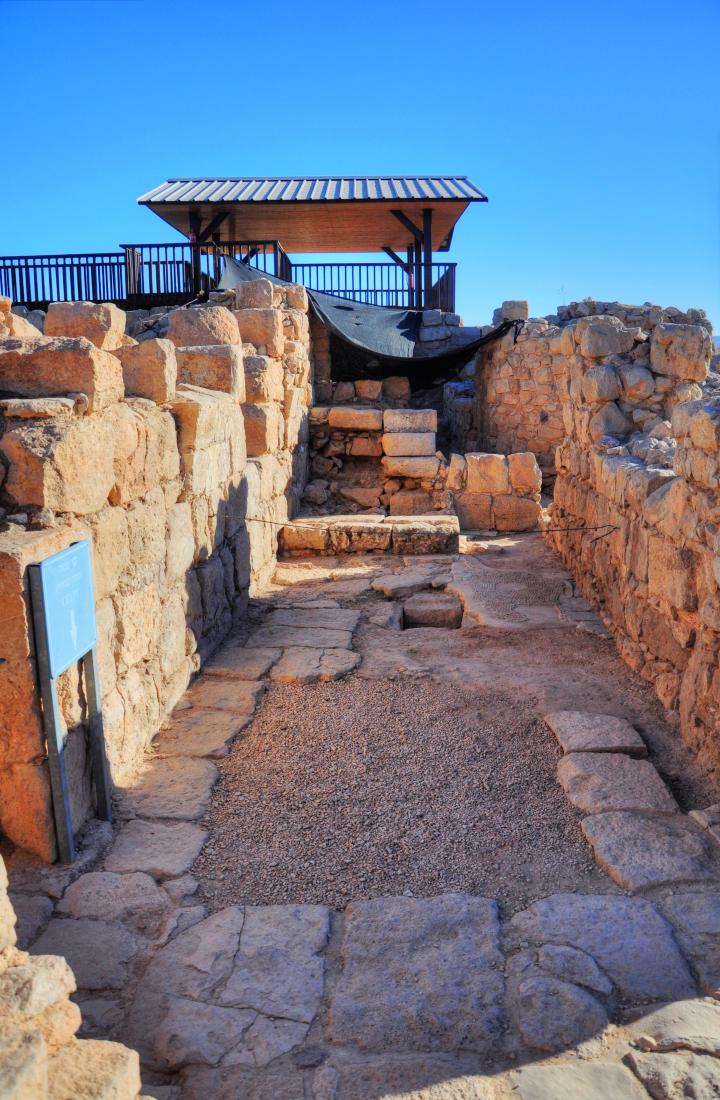 On the north side of the crypt is a narrow staircase with 13 steps that leads down to the entrance of the crypt.

The crypt has two underground halls: 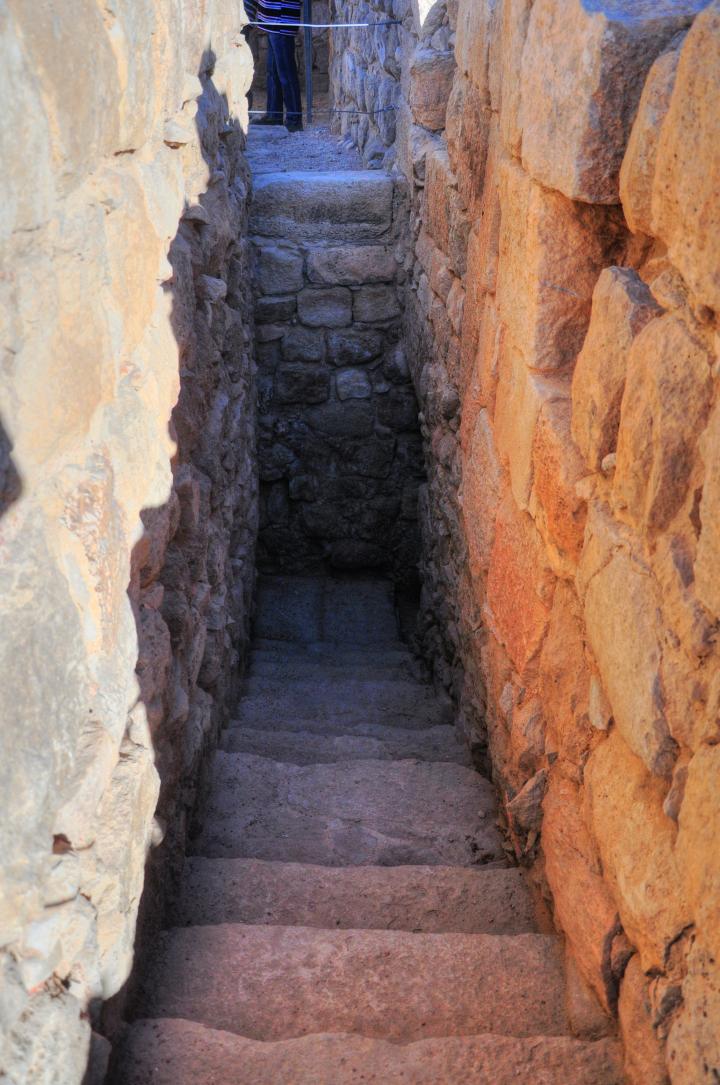 The burial crypt with the grave of Euthymius "the Great" was the major attraction in this monastery. Pilgrims came here to visit the grave and pay respect to the great hermit.

The monastery was built two stories high. A flight of steps lead up from the corridor near the crypt. The floor was supported above arched vaults and walls, creating the residential rooms of  the monks. 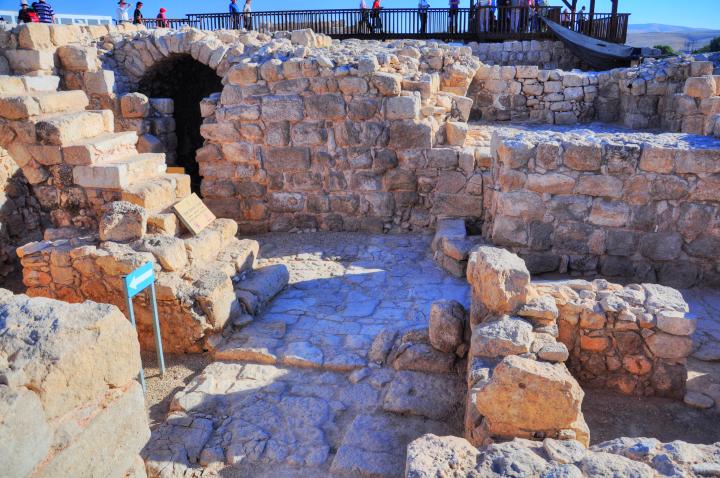 In one of the monks' rooms, adjacent to the crypt, is a section of a mosaic floor, which was restored. 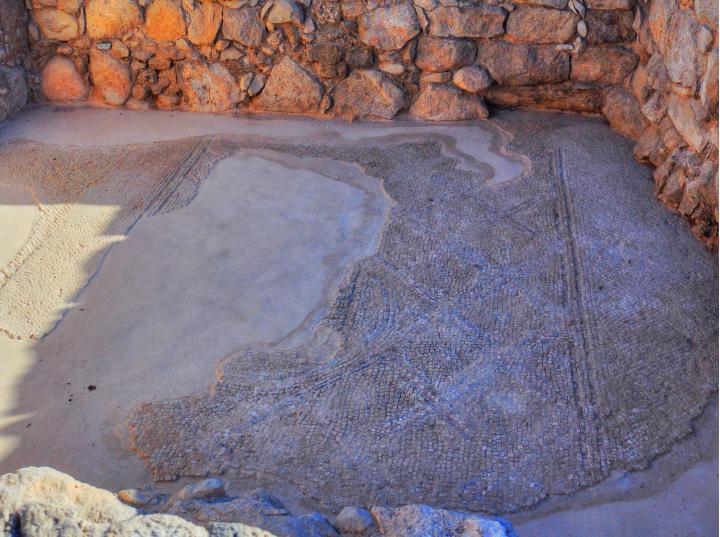 The floor of the church is built over the foundation of three massive vaults which ran parallel from the eastern wall towards the west.  These vaults were probably built over the ruins of the Byzantine church built in 482, and perhaps also above the older church of the Laura (428) .

Each vault is 24m long, based on massive 1.8m walls.   The large central vault (24m long by 4.9m wide, with a 3.2m high ceiling) functioned as the refectory (dining room for the monks). It was connected by a small passage to the southern vault which served as a pantry or kitchen, and was only 2.1m wide. The northern vault was also narrow, 2.1m wide. 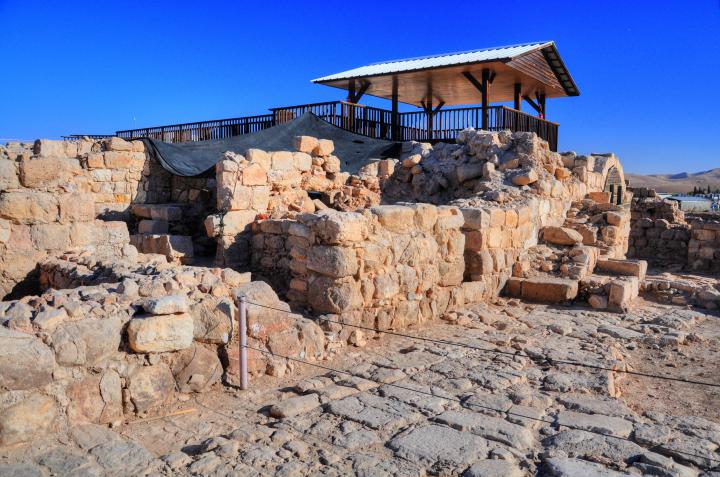 The tri-apsidal Church, which was constructed just after the 659 earthquake, is located in the center of the monastery, adjoining its east wall. It is oriented to the east as all ancient Churches.

The floor of the church (25.4 x 13.8m) is paved with a beautiful stone mosaics.   The inner space of the church was divided into two rows of square (1m x 1m) stone piers, with three piers in each row. Two of the eastern piers are seen in the following southern view.  They supported a series of arches which held the vaulted stone roof, including a dome which was located just above this section. 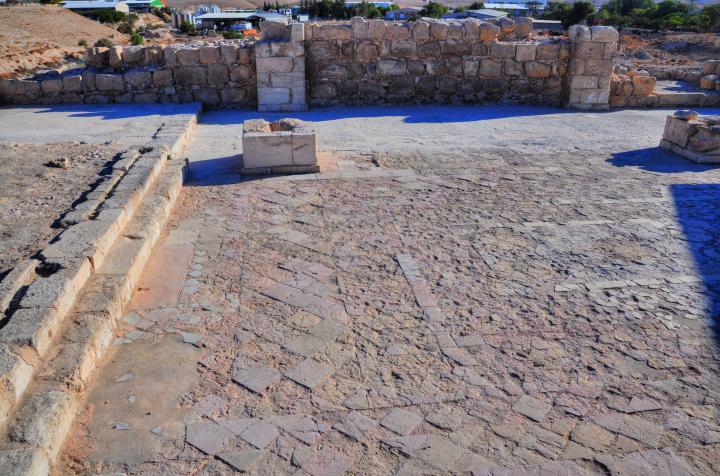 The eastern section of the floor, seen below in detail, is of the type "opus sectile", which is based on rough cuttings of various colored lime stones. This unique floor is dated to the Crusader period. 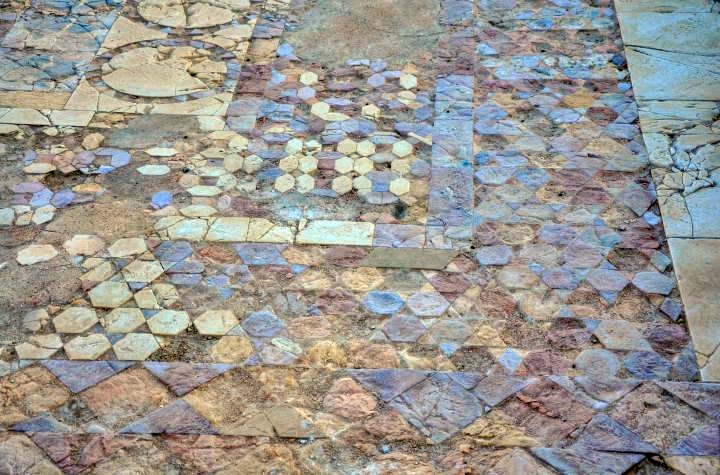 Another type of mosaic floor, with geometric patterns and small mosaic stones, is located on the western side of the floor. It is dated to the 7th C. 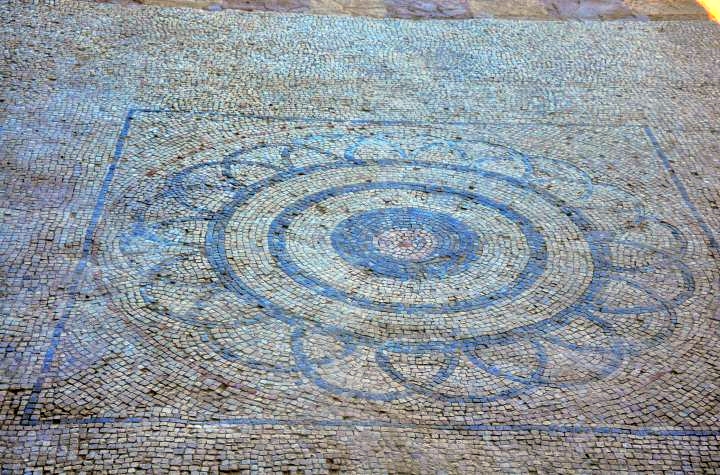 Standing on the edge of the church provides a great view of the monastery underneath it. In the following picture, you can see a small courtyard which is located on the north side of the church, reaching the wall above the crypt. A semicircular row of stones surround a window  which illuminated the underground burial crypt.

In the far side of the picture is the entrance gate near the north-west corner. 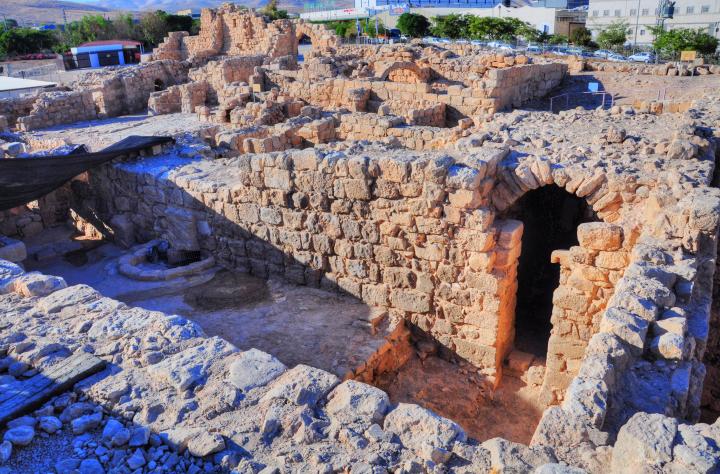 The north end of the structure, seen below, receives water from channels that fetch rain water from the hills on the north side.  The pool is used to separate the soil from the water before it flows into the reservoir. 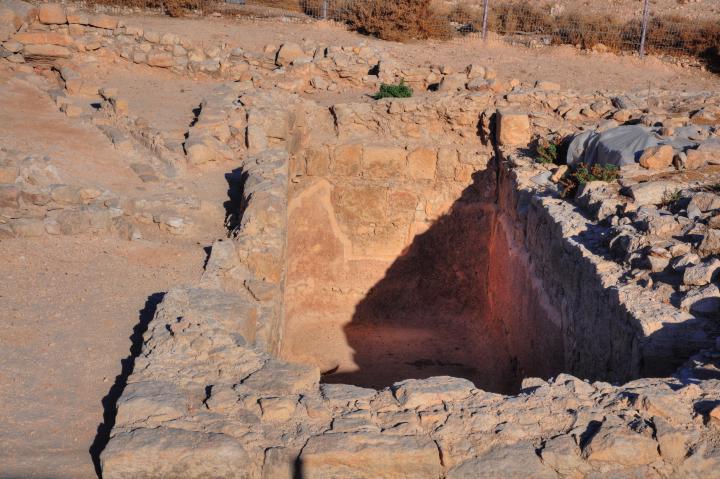 The entrance to the underground structure is from the south side, via a modern staircase.  The reservoir is rectangular, 12m x 18m, and is more than 12m deep. Its total capacity is over 3000 m3.

Here, too, there are water channels that bring rain water from the rooftops of the Monastery, enter a collecting pool where they are filtered, then flow into the reservoir. 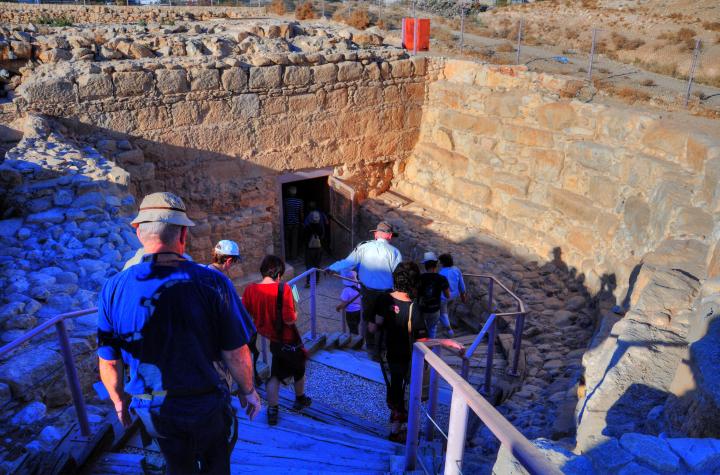 The interior of the reservoir is shown in the picture below. It is dated to 482 - when the coenobium was constructed. 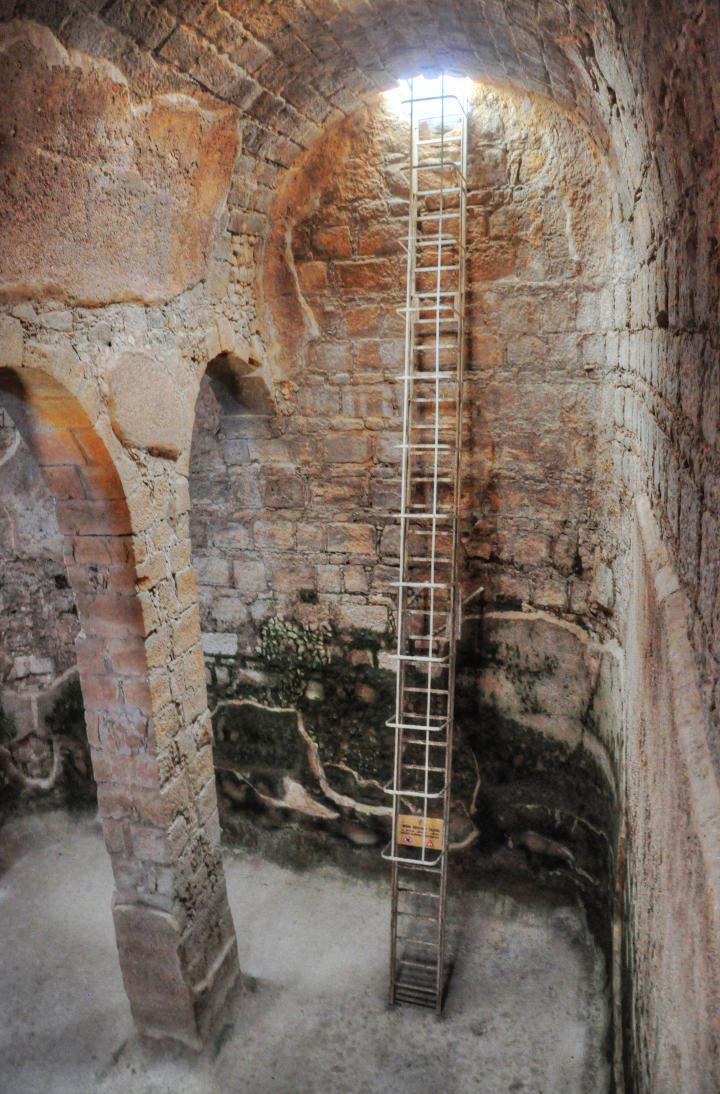 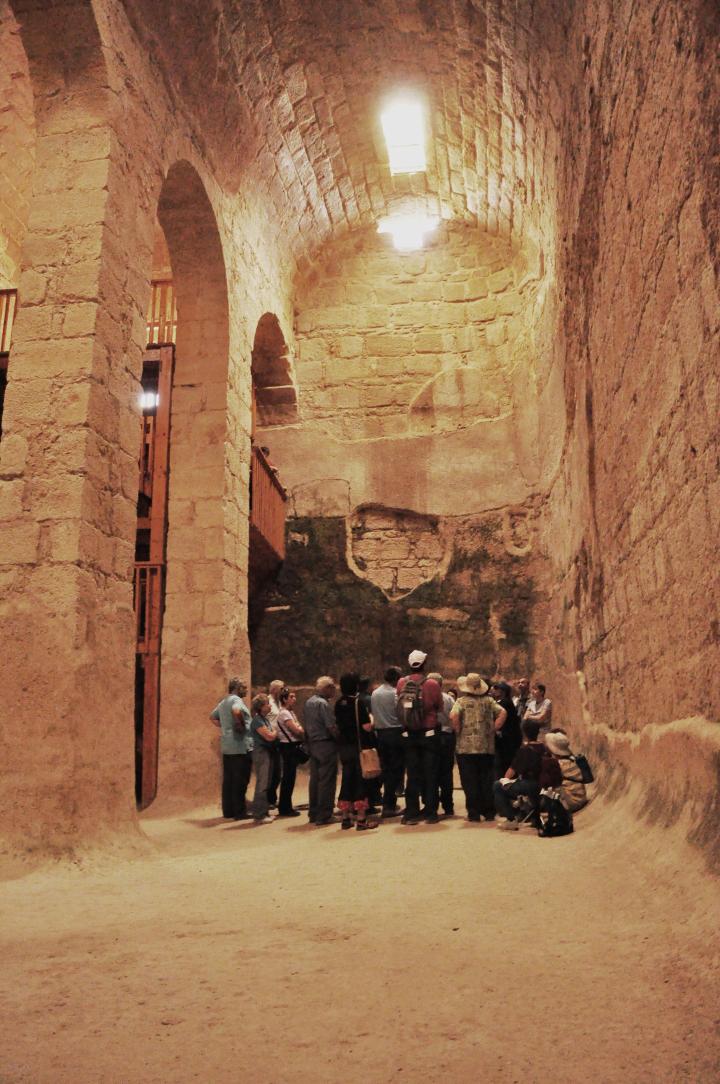 All in all, the visit to the Monastery of Euthymius "the Great" is unique and we highly recommend it.

Etymology - behind the name:

BibleWalks.com - walks with the Bible