Elon Moreh is an Israeli community in Samaria, located on Mount Kabir, east of Shechem.

Genesis 12 6: "And Abram passed through the land unto the place of Sichem, unto the plain of Moreh. And the Canaanite was then in the land.".

Elon Moreh is an Israeli community in Samaria, located on Mount Kabir, east of Shechem.   It is named after the place of Abraham's altar location (Genesis 12 6): "And Abram passed through the land unto the place of Sichem, unto the plain of Moreh. And the Canaanite was then in the land.".

The Jewish community, established in 1980, was one of the first of its kind in Samaria.

Elon Moreh is located on the western section of Mt Kabir ("the great"),  overlooking the valley of Tirzah, Mt Ebal and Mt Gerizim.

The area around the community is under full Israeli control (aka, "C" zone), and therefore can be accessed by Israelis. The access road passes near the community of Itamar. 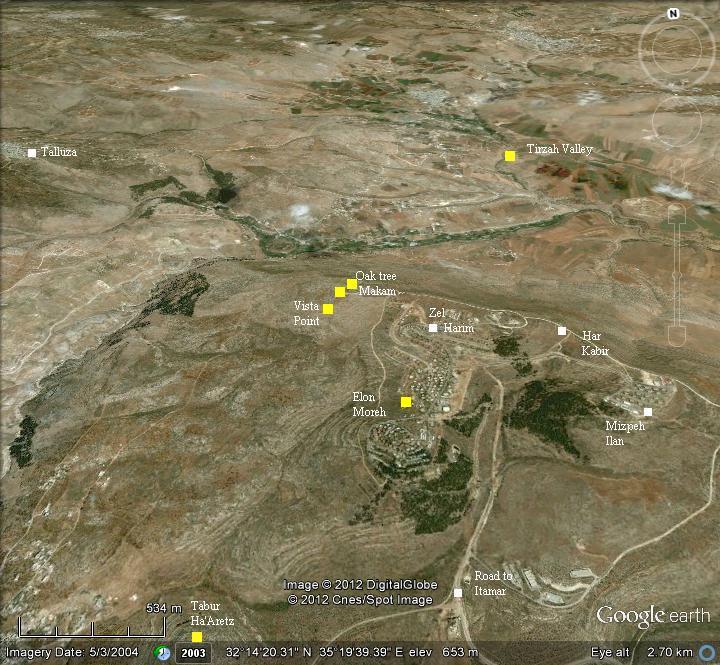 Elon Moreh is the first place that the Bible names when Abram (later: Abraham) comes from his native country with his wife and family. God appears to him in the plains of Moreh, and he is told to build an altar  to commemorate the event of arriving to the promised land on a mountain near Shechem (Genesis 12 5-8):

The KJV version translated the Hebrew word "Elon Moreh" to the "plain of Moreh". The original version (Elon, or Eloni) means an oak tree or oak trees. This place appears in another verse, but with the plural form "Eloni Moreh" (Deuteronomy 11 30): "Are they not on the other side Jordan, by the way where the sun goeth down, in the land of the Canaanites, which dwell in the campaign over against Gilgal, beside the plains of Moreh?".

The actual place of the oaks of Moreh is not known. These were probably Holy trees, located on a high point around the city of Shechem, where Mount Ebal and Mount Gerizim can be seen. One candidate location would be the west side of Mount Kabir.

A Biblical map is shown here, with Mt Ebal and Mt Gerizim on both sides of Shechem. The location of the north-west side of Mt Kabir is indicated by a red square. Many major routes passed nearby - the north-east through Tirzah to Beit Shean (Skythopolis), the east to Adam crossing over the Jordan river,  South to Jerusalem, west to the coast, and north through Shomron/Samaria to Jezreel and the Galilee.

Roads and cities during the Israelite period, 12th C to 7th C BC (based on Bible Mapper 3.0)

After the discovery of the ancient altar on the north-east side of Mt Ebal by Prof. Adam Zertal, he  suggested that Mount Kabir was actually Mt Gerizim, and not the mountain to the south of Shechem, which - according to his theory - was swapped by the Samaritans. The archaeologist  based his theory on the geographic description of the place of the altar (as per Deuteronomy 11 30), with Mt Kabir facing the place of the altar.

A set of Roman roads passed to the north of Mt Kabir, crossing the valley of Tirzah (Wady Farah). They appear in the map below as a double dashed line, originating in Shechem (Neapolis), which is located beyond the left side of this section of the map. Conder and Kitchener (1882) reported on these roads to Beit Shean and Jordan valley and the milestones found along the roads (SWP Vol 2, p. 232).

An aqueduct supplied water to Neapolis, carrying the waters of Ain El-Kabire ("Kefir" spring) from the south side of Elon Moreh to the Roman city. A 70m section of its underground tunnel is located near the spring.

An observation point is located on the south-west side of Mt Kabir, in near an abandoned military post. From this side of the mountain is a great panorama of the valley of Michmethah, Mounts Gerizim and Ebal, the city of Shechem (Nablus) and the villages around it.

The photo below shows Mt Gerizim in the far background (slightly off center to the right). The town of Balatah (location of the mound of Biblical Shechem) is located in front of the mountain, and the modern city of Nablus to the right of it, behind the tip of the slopes of Mt Ebal. 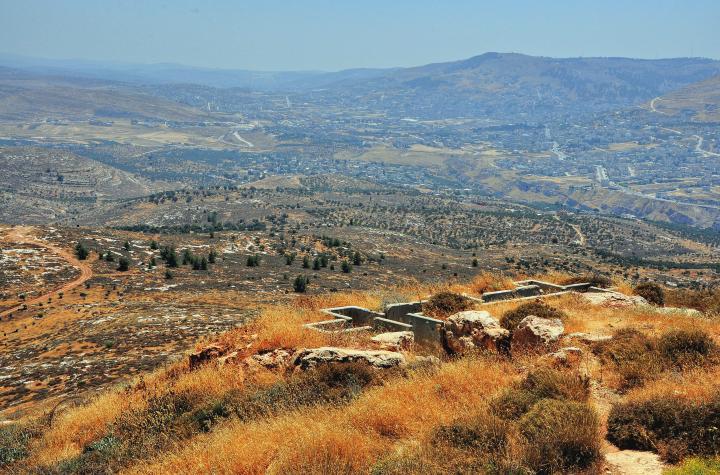 The center of Elon Moreh, a community established in 1980, is seen in the next photograph. Additional neighborhoods are located on the hills around the center of the community. 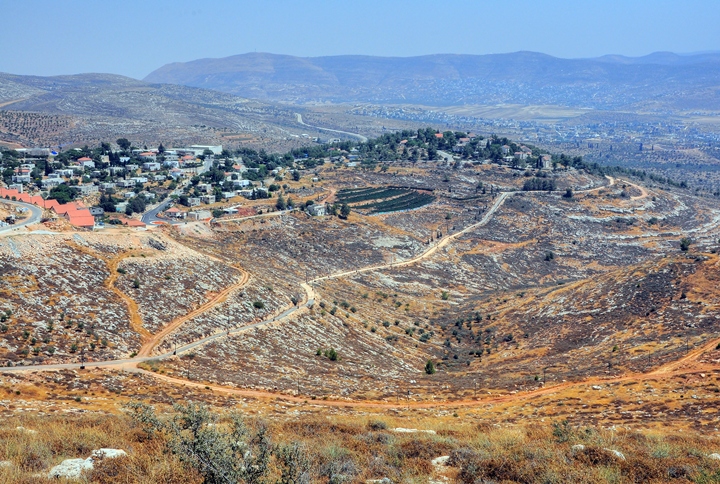 The next photograph shows a round hill, 1.5km south of the observation place. It is called in Arabic "Ras Tabur". This name identifies the site to the place mentioned in the battles of Abimelach - Tabur Ha'aretz (Hebrew for the center of the land). He was the  bastard son of the Judge Gideon, who set to establish the first Israelite Kingdom in the area of Shechem. His first act was to kill all but one of the 70 sons of Gideon, who had many wives.  Abimelech was a king over Israel for 3 years in Shechem, but then a mutiny broke out, headed by Gaal, and he was forced to flee to the city of Arumah. The place "Tabur Haaretz" is translated as "the middle of the land" (Judges 9 37): "And Gaal spake again, and said, See there come people down by the middle of the land, and another company come along by the plain of Meonenim". 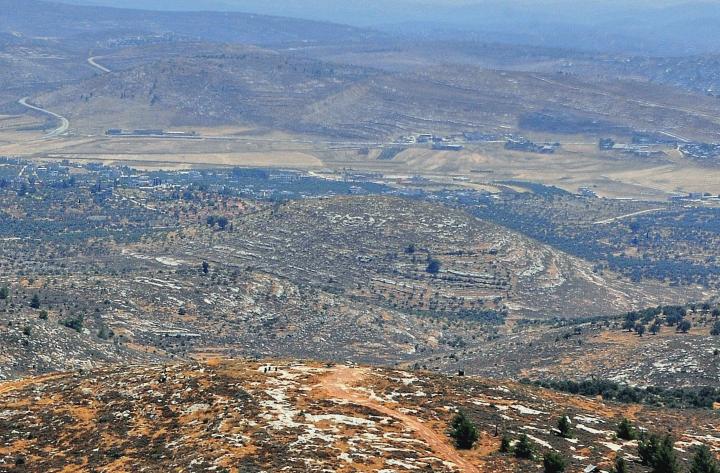 A panoramic view of the south side of Elon Moreh, as seen from the vista point, is shown in the following picture. Pressing on it will pop up a panoramic viewer window.

To open the viewer, simply click on the photo below. It will open a new window after a minute or so.  The flash-based viewer will allow movement left/right and zoom in/out, and also view in full screen mode.

At the observation point we encountered a group of settlers who came to tour the sites of the area. The group was guided by Benny Katzover, one of the founders of the modern settlement group of "Garin Elon Moreh", who first attempted to settle in Sebastia (1975), and eventually relocated to the present location of Elon Moreh (1980). Benny, one of the prominent leaders of the settlers, pointed out to the major sites around this end of Mt Kabir, and related the sites to the Biblical sources.  Although some of the listeners behind him seem to ignore the lecture, his speech is indeed electrifying. 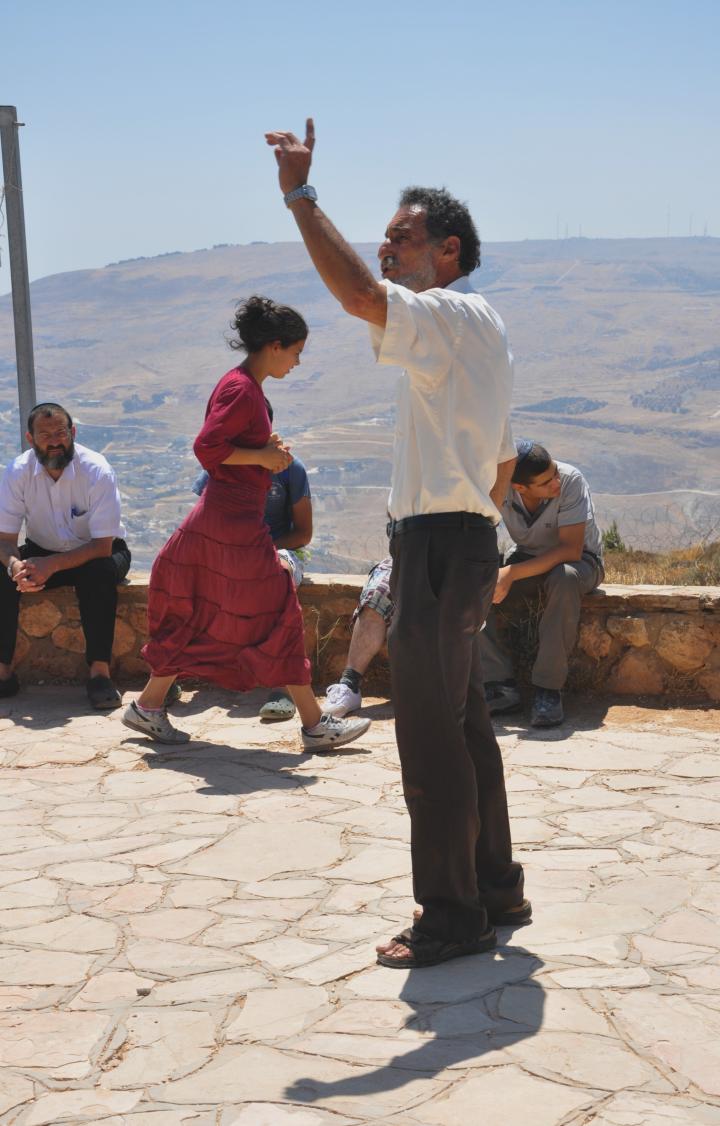 On the high point of the western section of Har Kabir, a short walk from the south observation point, is a Makam (place of prayer). It is identified as Neby Belan Ibn Rubah. Some identify this holy place as a Sheikh's tomb, as they are commonly located on the high tops of mountains. Villagers from the area used to climb up here and pray for rain or other wishes. 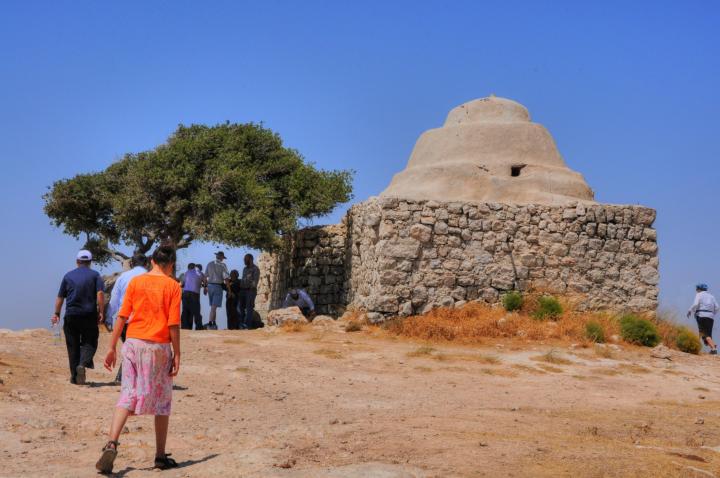 Conder identified this place in 1882 in the Survey of Western Palestine report (SWP Vol 2 p32):  "Neby Belan is identified by the natives with Belal Ibn Rubah, the Muedhen of the Prophet".

According to the local tradition, this was the place where Belal Ibn Rubah, the Muezzin (Meudhen) of the Prophet (Muhammad), called the warriors to prayer after the victory of the Arab army in the area of Shechem (636 AD). The army was headed by Umar ibn al-Khattab,  the second Caliph after Muhammad, who defeated the Byzantine forces in a number of battles across the Holy Land. 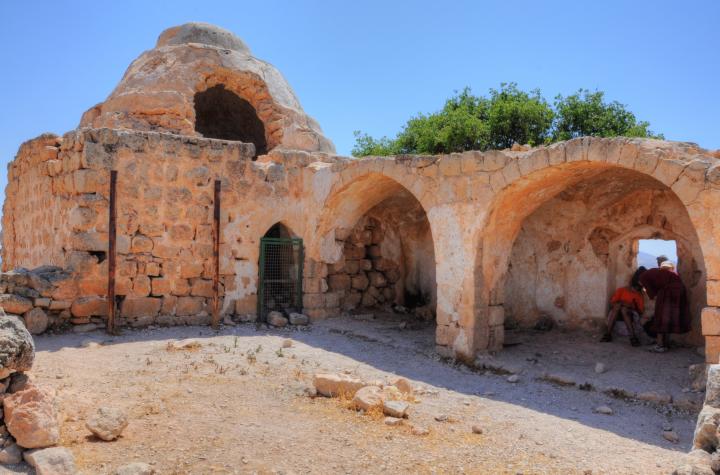 Belal Ibn Rubah Al Habashi (580-640AD) was an Ethiopian emancipated slave who resided in Mecca, and became a companion to the prophet. He was the first Muezzin (Muslim caller for prayer), selected by Muhammad. Belal later accompanied the military expeditions during the Arab conquests of Syria and Israel, and this Makam was constructed in honor of Belal and the conquests of the army. 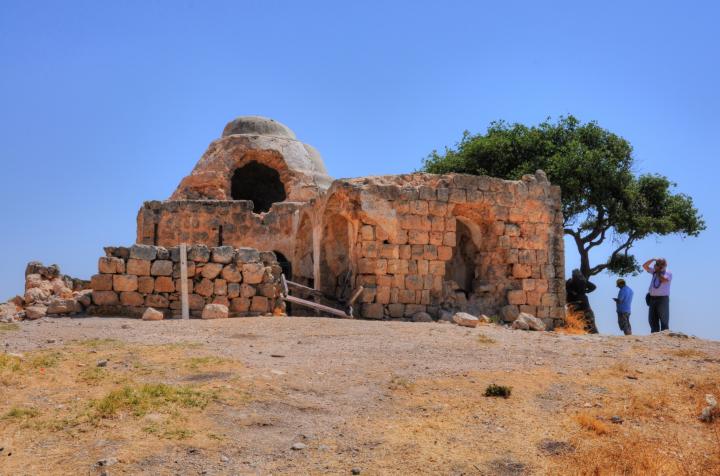 A Terabinth oak tree is located on the west side of the structure.

Here, under the ancient oak tree, we listened to the history of the resettlement of Samaria by the Jewish settlers, and the discovery of the altar of Joshua on the north-eastern slopes of Mt Ebal. This was presented passionately by Benny Katzover. 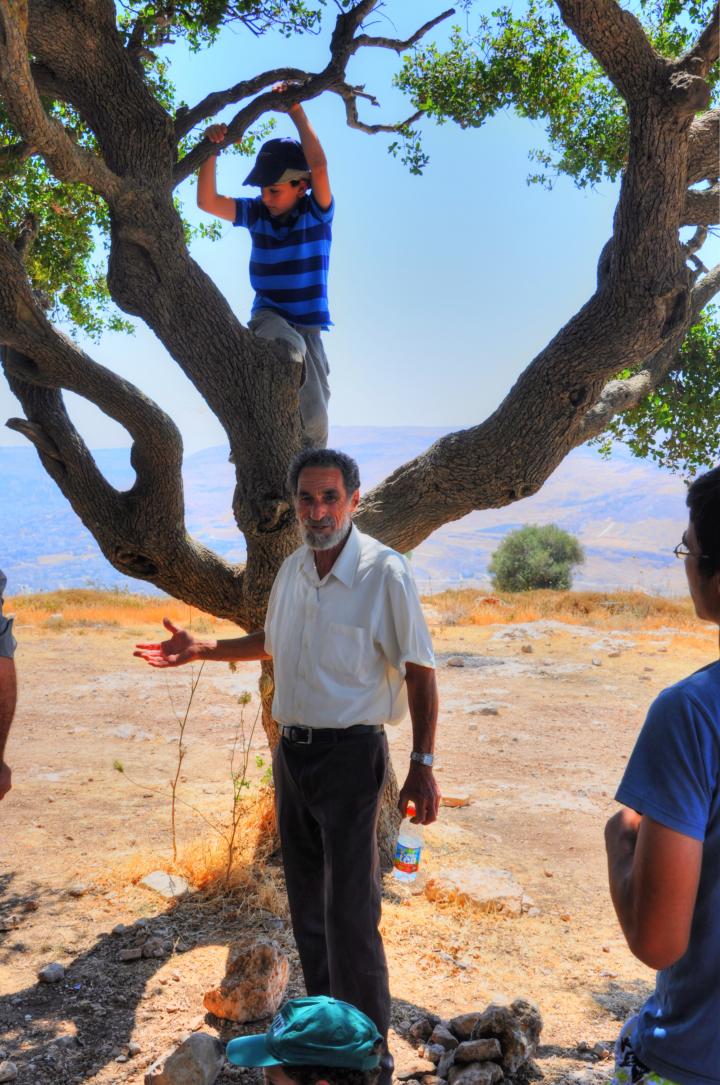 To the north of Neby Belan is a large Terabinth oak which overlooks the Tirzah valley (Wadi Farah). Perhaps this was the place of Abraham's altar? 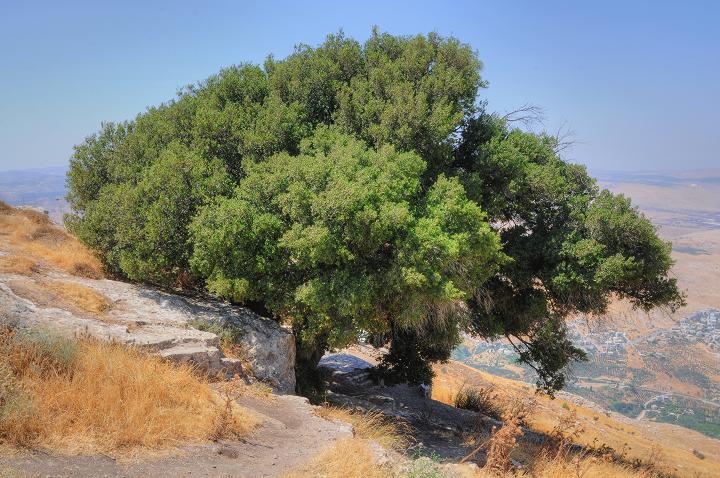 A few steps lead down to the observation place. A monument is located here on the side of the tree, in memory of Brigade General Joseph Lunz (1935-1983), who was the IDF commander of the region of Shechem. 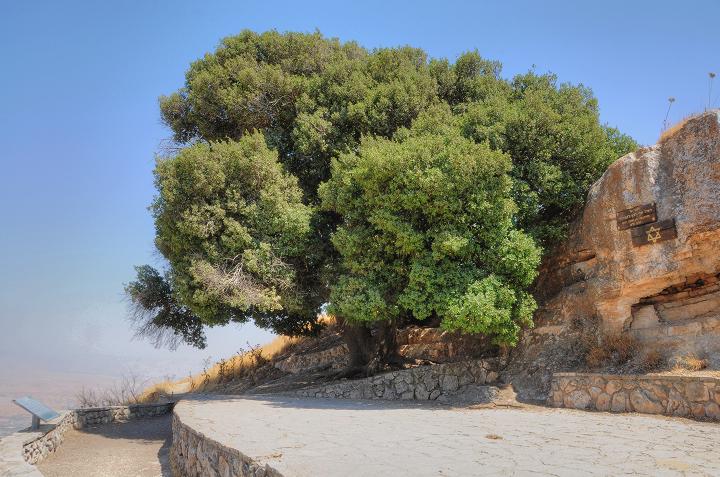 To the side of the tree, under the rock, is a small cave. 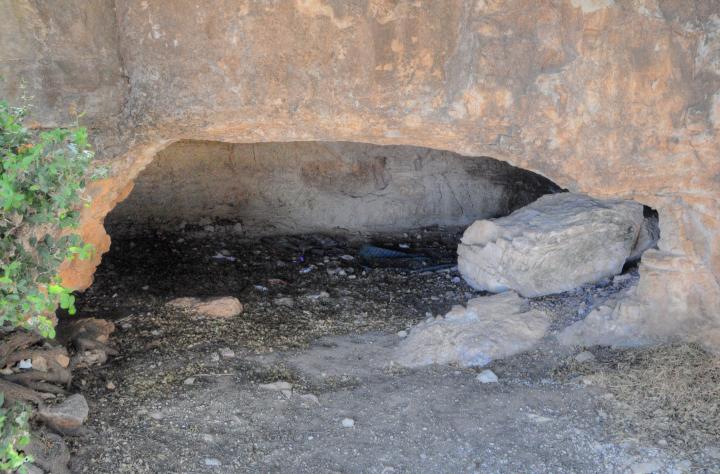 Behind the valley is the mountain ridge of Jebel Tammun (altitude 590m). 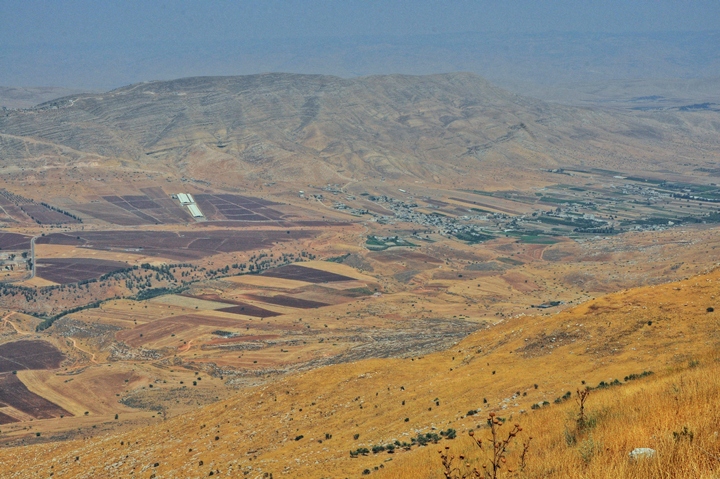 To the west of this view are interesting points of interest that are related to Biblical sites, as indicated below:

Another town is seen in this view: 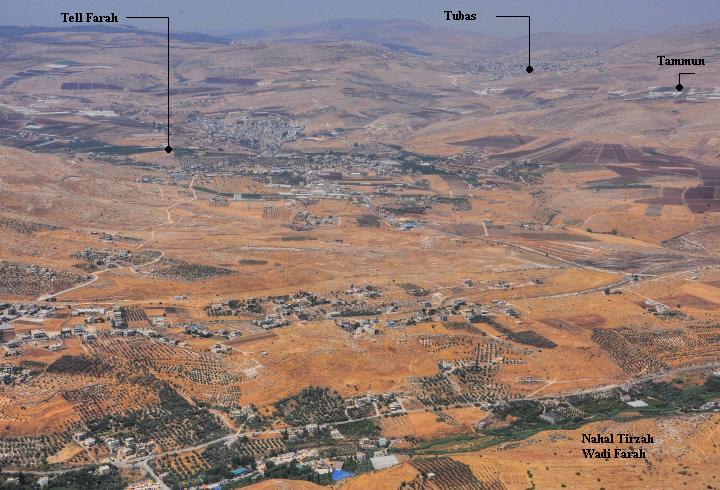 A panoramic view of the north side of Har Kabir, as seen from the oak tree towards the north, is shown in the following picture. Pressing on it will pop up a panoramic viewer window.

To open the viewer, simply click on the photo below. It will open a new window after a minute or so.  The flash-based viewer will allow movement left/right and zoom in/out, and also view in full screen mode.