Dome of the Rock

The dome of the Rock shrine, located in the center of the temple mount, with its large golden dome and an octagon structure, is one of the most beautiful and enduring shrines in the World. 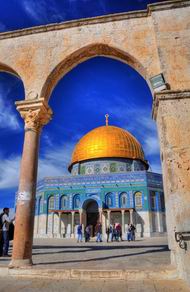 The dome of the Rock shrine, with a large golden dome and an octagon structure, was built  in 691AD, and named  after Khalif Omar. The rock is, according to Muslim tradition, the spot where prophet Mohamed ascended to heaven.  According to Jewish tradition, the rock was the center of Holy of Holiest, the center point of God's dwelling and the creation of the world. It is one of the most beautiful and enduring shrines in the World, and remained almost untouched throughout the years.

This was the location of the first temple built by King Solomon (950BC) and destroyed by the Assyrians (586BC), and the second temple (initially built by the returning exiles in 516BC).

The area of the dome of the rock was part of the great second temple which was built by Herod the Great, King of Israel under the Romans, at about 20BC. After the Romans crushed the great revolt (70AD), the temple was leveled and was in ruins until the end of the Byzantine period.

The Arabs conquered Jerusalem in 638AD, and Khalif Omar visited and prayed in the site in that year.  The dome of the Rock shrine, with the large golden dome and an octagon structure, was built by the Umayyad Khalif Abdul-Malik ibn Marwan. The construction started in 689 and completed in 691 (72 years according to Muslim calendar), as indicated on an interior mosaic inscription. There are, however, other suggestions for a later completion date (696, as in the links below).

The shrine is named after Khalif Omar. It is one of the most beautiful and enduring shrines in the World, remaining almost untouched throughout the years. The Dome of the Rock was originally built as a shrine, and is not a typical mosque.

The name dome was derived from its golden Dome, and "Rock" is named after the "foundation rock". The rock is in the center of the mosque, and according to Jewish tradition was the place where Abraham came to sacrifice his son Isaac. The rock, according to the faith, is the center of the world. According to Muslim tradition, prophet Muhammad ascended back to Mecca from this rock after his night journey.

In 1099 the Crusaders called the Temple mount as "Templum Domini", turned the Dome of the rock to a church, adding a cross on the dome.

The Dome of the Rock shrine and al-Aqsa mosque remain active until today. In 1967 Israel reunited Jerusalem, but left the control of the temple mount to the Muslim Wakf. In 1994 the dome was refurbished with Gold, using 150KG of pure Gold, which was donated by King Hussein of Jordan.

The order of the photos is "clockwise" around the dome: south->west->north->east.

Walking from Al-Aqsa mosque towards the north side of the temple mount, the Dome of Rock stands out in its shining golden dome. The shrine is located at the center of the temple mount, situated on a higher platform. The southern entrance to the platform is accessed by a flight of stairs. At the top of the staircase stands an arched entranceway, supported by three columns and set between two pilasters. Beyond this freestanding  gateway is the glorious golden shrine. 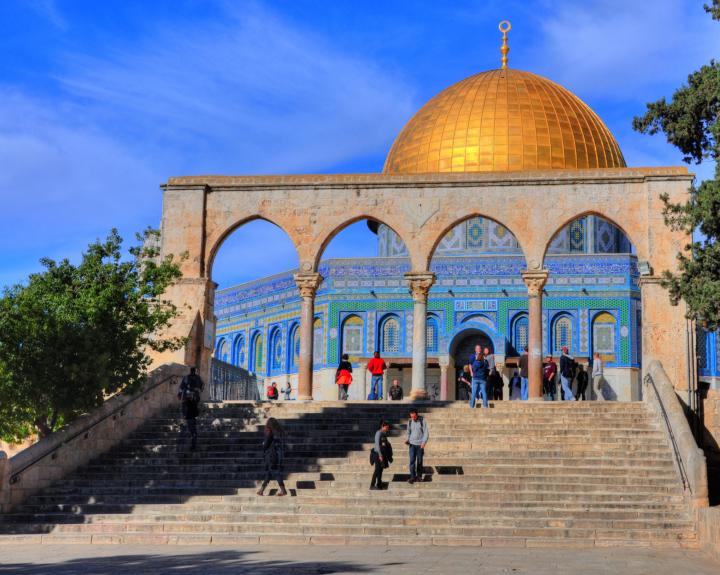 A closer view of the gateway and the shrine behind it. This arched entranceway is one of the eight around the raised platform. 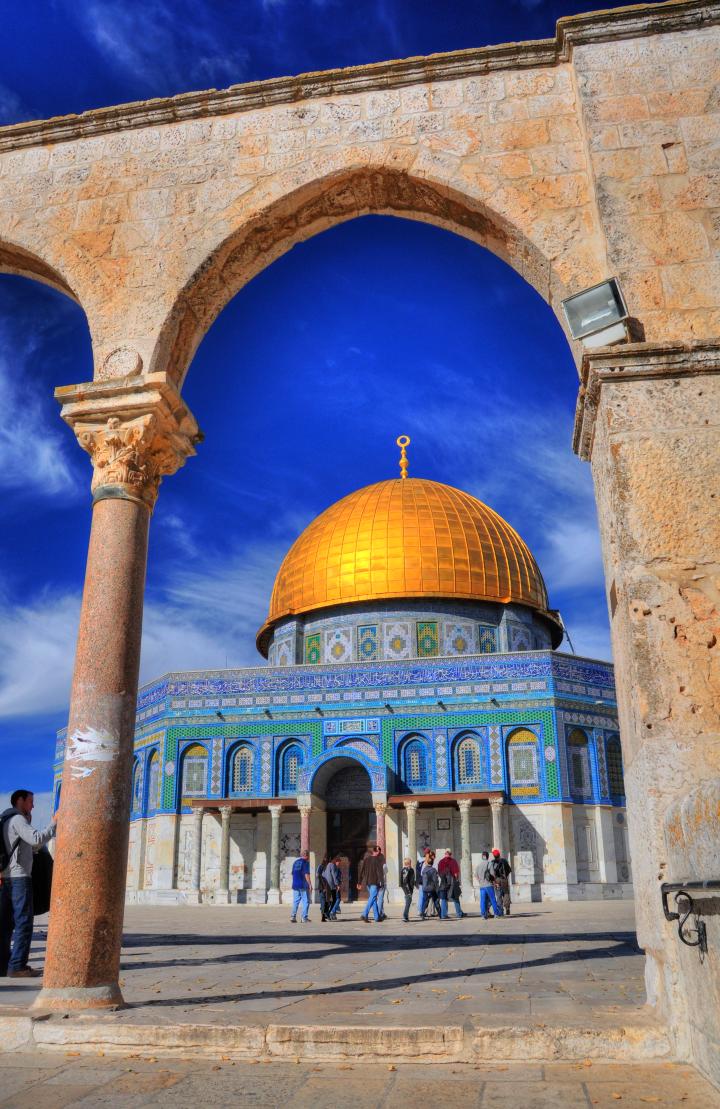 In the center of the platform is the octagon shaped shrine.  Its walls are decorated with colorful ceramics, which were prepared by 16th C Armenian craftsmen.  Many of them contain Arabic inscriptions from the Qur'an.

The art of decorating by ceramic tiles was based on a 15th C Turkish center in Iznik that produced tiles and ceramics for the Ottoman empire. The glazed ceramics were first was introduced to Jerusalem in the 16th C by when the Dome of the rock tiles were repaired by the Ottomans under Suleiman the Magnificent. Note that after WW1 the Armenian refugees, who came to Jerusalem and resettled in the Armenian section, imported the craftsmanship and decorated many buildings in Jerusalem. 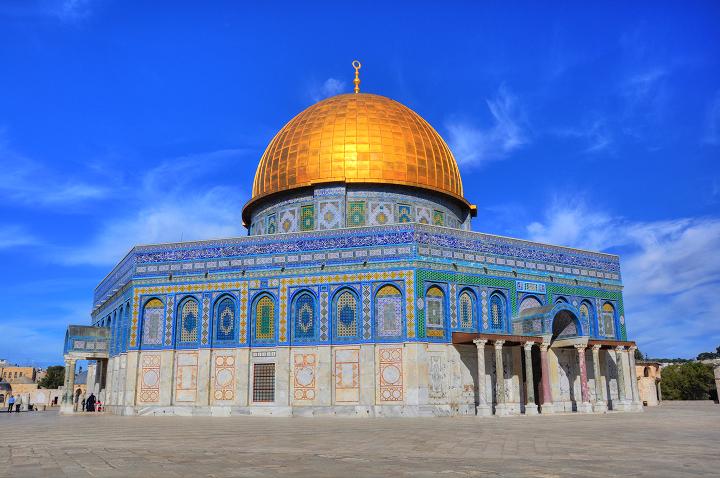 A view of the south-east side is seen in the following picture. 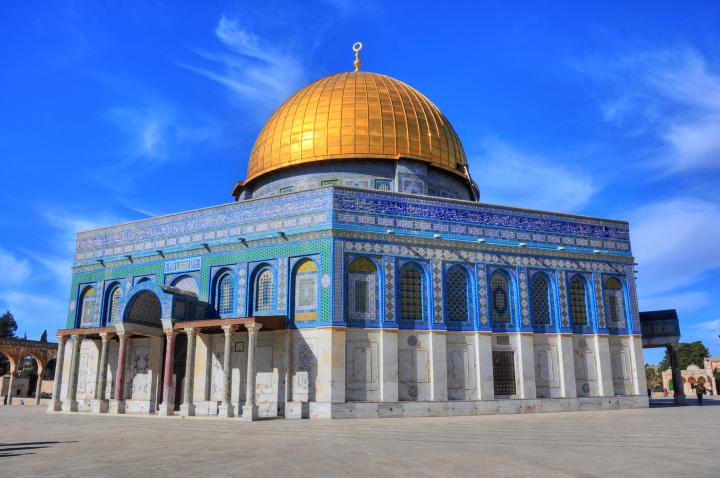 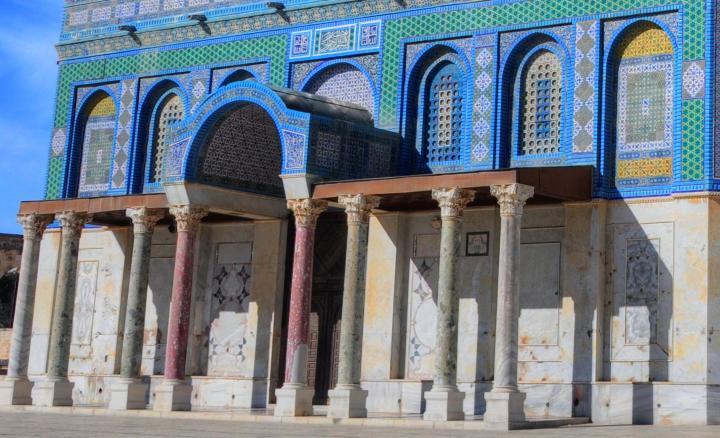 The following picture shows the south-west side of the platform. The green lines painted along the ground are markers whose purpose is to line up the thousands of worshippers who come here to pray. 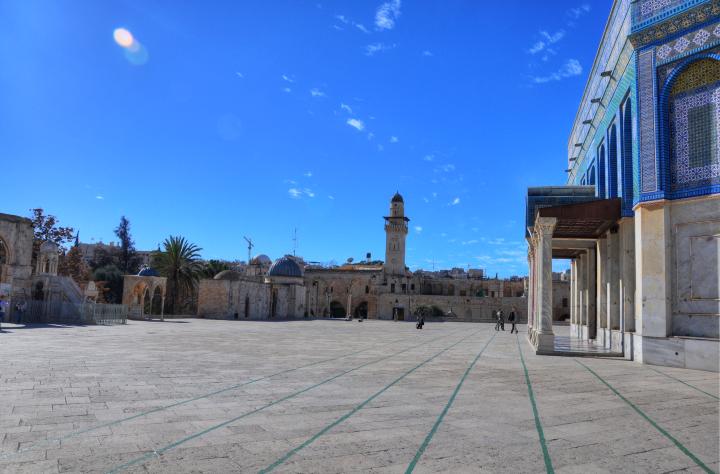 On the south side of the Dome of Rock, near the south gateway to the raised platform, are two interesting structures - the "Summer pulpit" (in the center of the picture below) and the Dome of Joseph (on the left side). 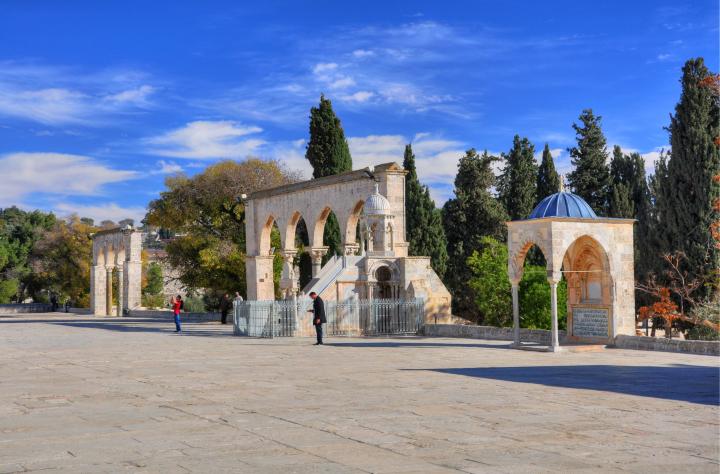 A closer view of these two structures: 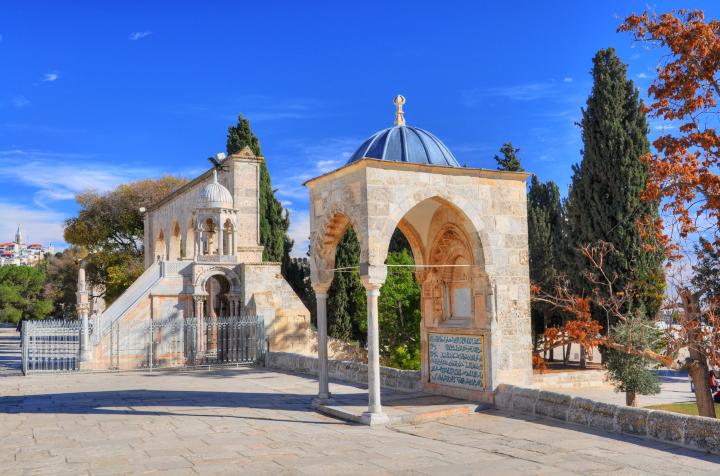 The "Summer pulpit" (Minbar al-Seif) is used as a open air speaker stand where the imam (leader of prayer) stands to deliver sermons. The marble structure is capped by a small white dome, and combines several architectural styles, including the Crusaders design. It was built in the 12th C during the times of Saladin, who defeated the Crusaders. It was repaired by the 14th C Jerusalem judge Burhan al-Din, which gave it its other name (Minbar al-Din). 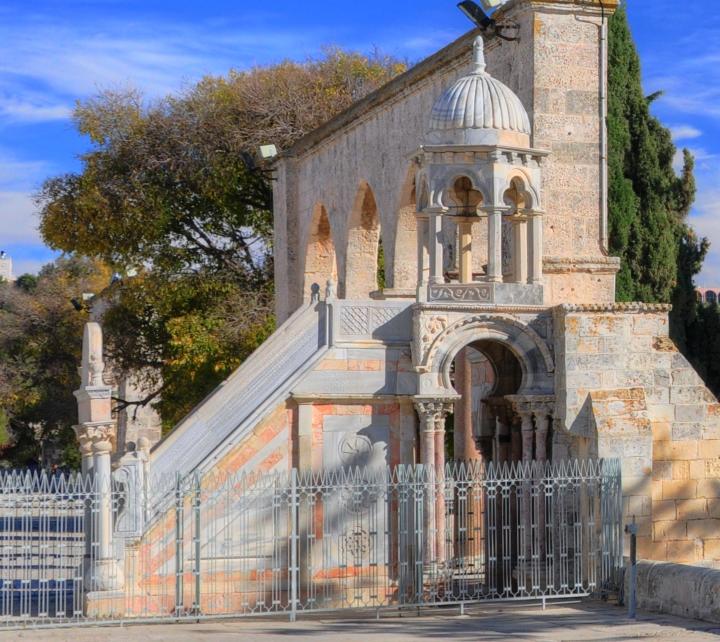 The Dome of Joseph (Qubbat Yusuf), seen below, is a small domed structure (2.8m x 3.5m), which is supported on two columns in its front, and a prayer corner on its rear which shaped as a shell. It commemorates the prophet Joseph. It is also named after Yusuf Saladin (conqueror of Jerusalem) who built it, and Yusuf Agha (the 17th C Ottoman Chief Eunuch) who repaired it. 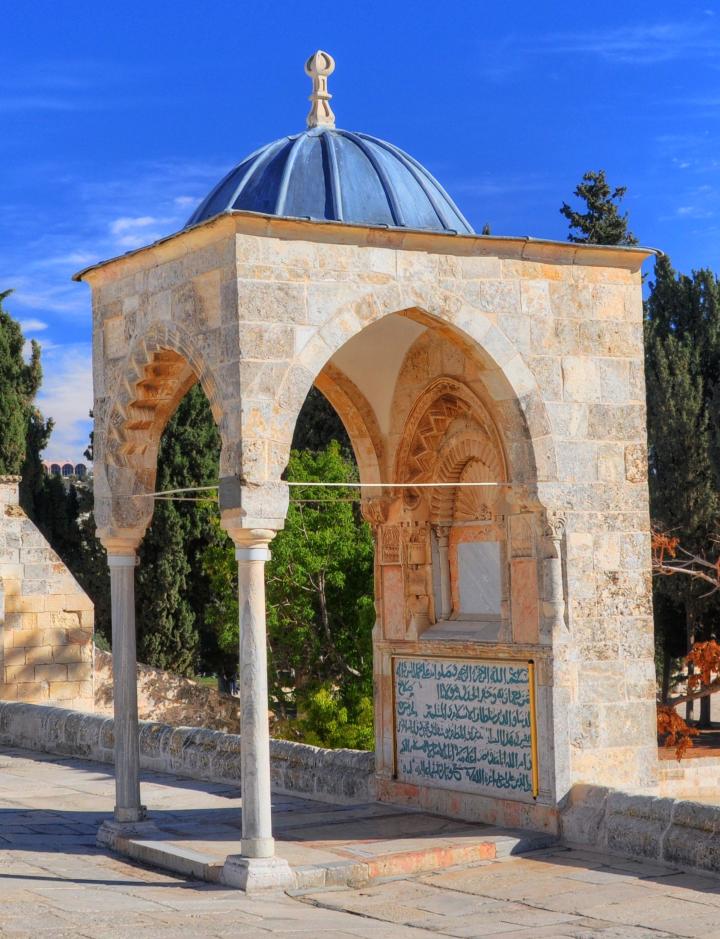 The following photo shows the shrine behind the western archway. This is also the main entrance to the shrine. 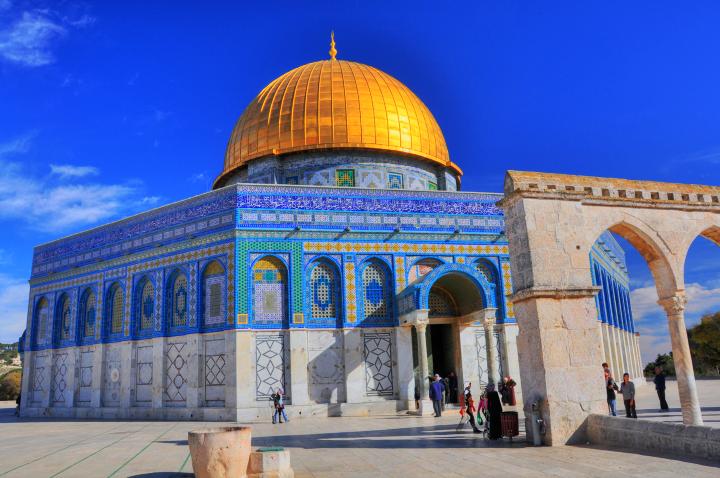 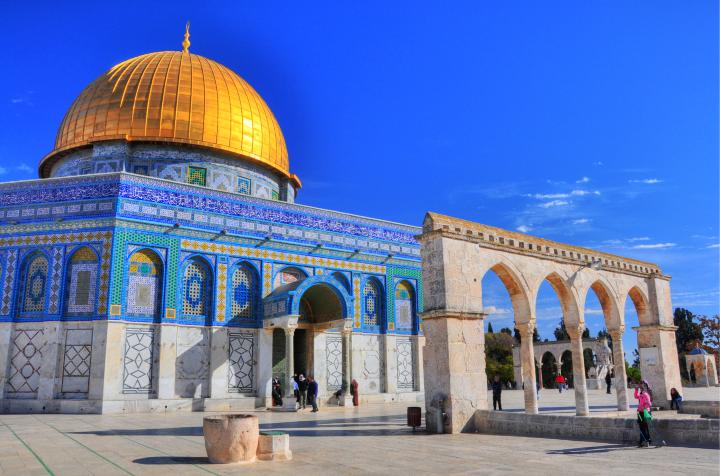 The western door serves as the main entrance. Only Muslims are allowed to enter inside the shrine. 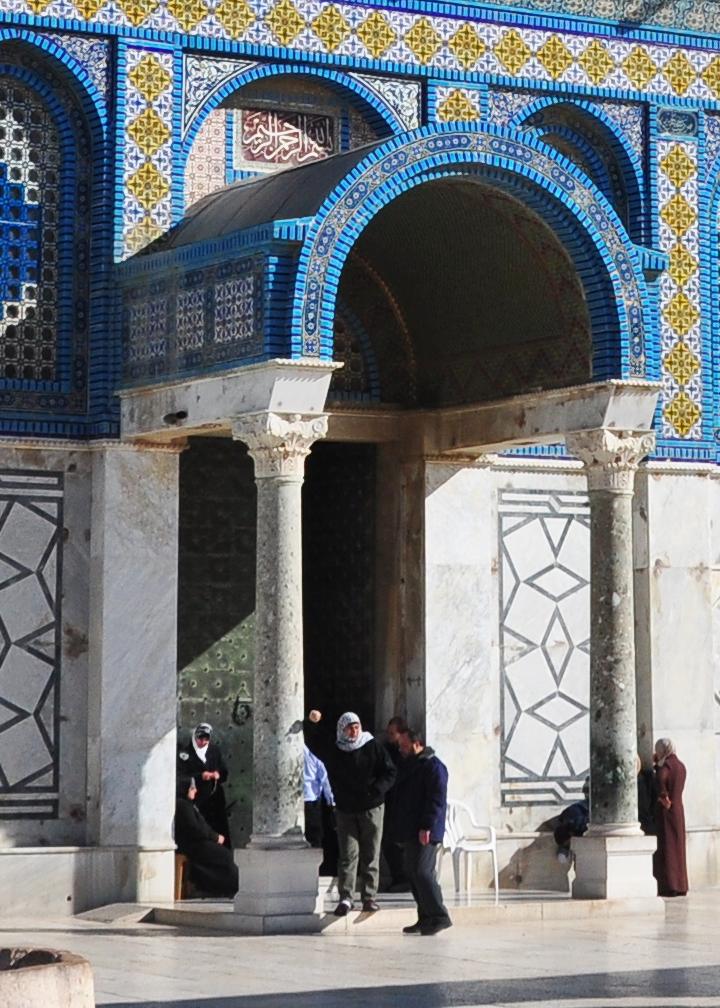 The next pictures are viewed from the north-west side is seen below. Uncle Ronnie is seen standing near a well. 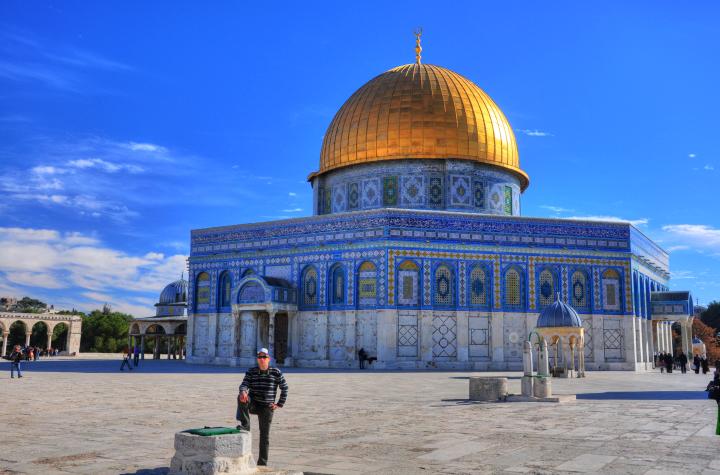 Another view from the north-west  is seen below. A small blue-caped dome is seen near the shrine - the Dome of the prophet - which is 9m from the dome. 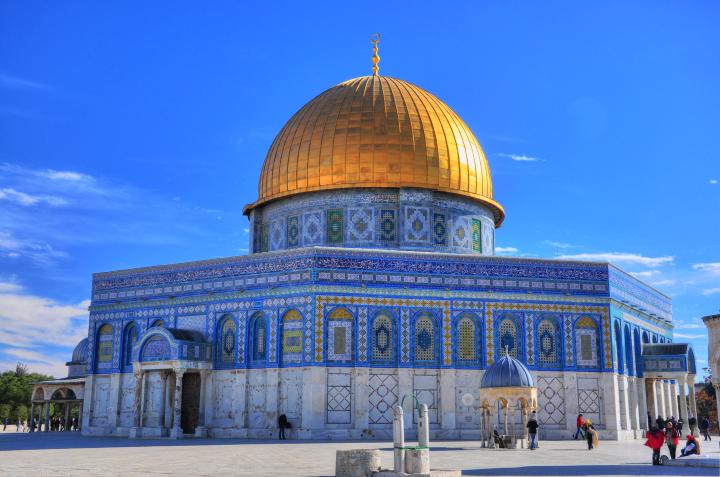 The Dome of the prophet is one of the three Ottoman-period freestanding small domed structures on the platform around the shrine. The prophet dome (Qubat al-Nabi), 3m in diameter, was built in 1538 to commemorate the place where the Prophet Muhammad prayed with the Biblical prophets and angels. 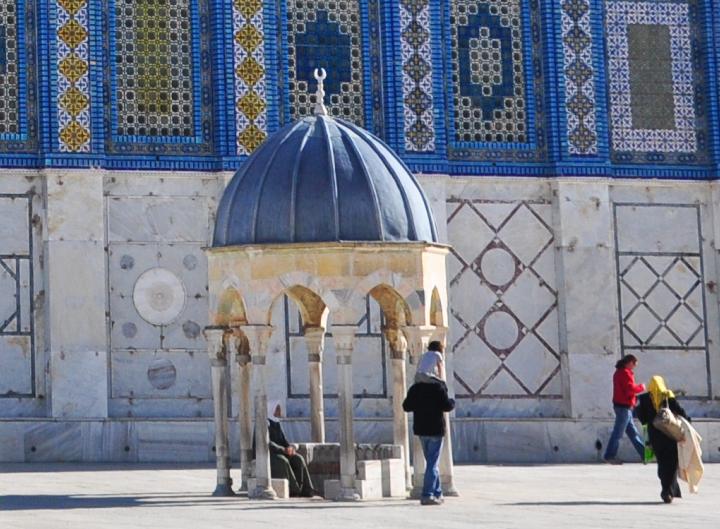 A small (6m wide) dome is located 22m to the north-west of the Dome of rock, as shown below. This is the Dome of the Ascension (Qubbat al-Miraj). It was initially a Crusader baptismal, then destroyed and rebuilt as a Muslim shrine (1200) to commemorate the location of the site where Prophet Muhammad prayed before his ascension to the heavens (622AD). 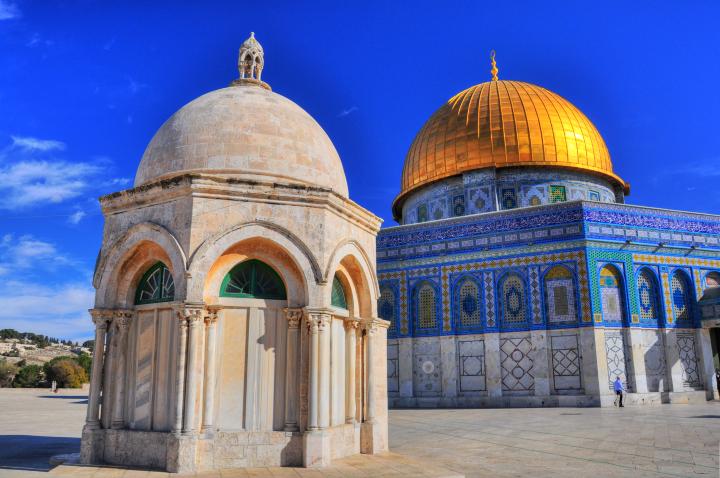 Another view of the Dome of ascension is shown below. 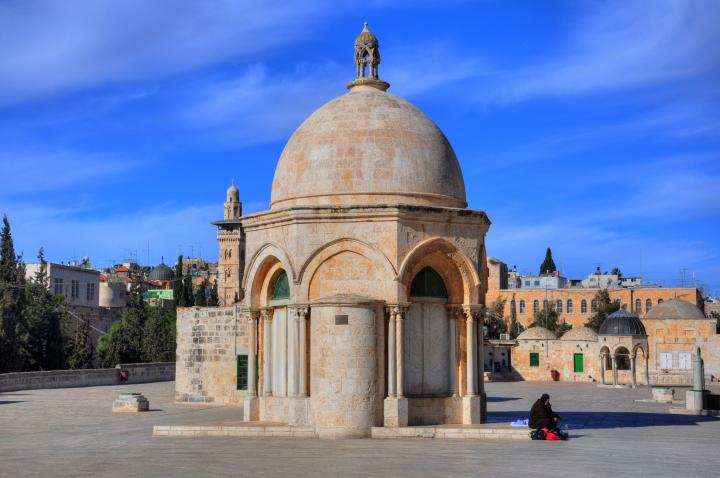 A well is seen in the foreground, used to fetch water from the underground cisterns. 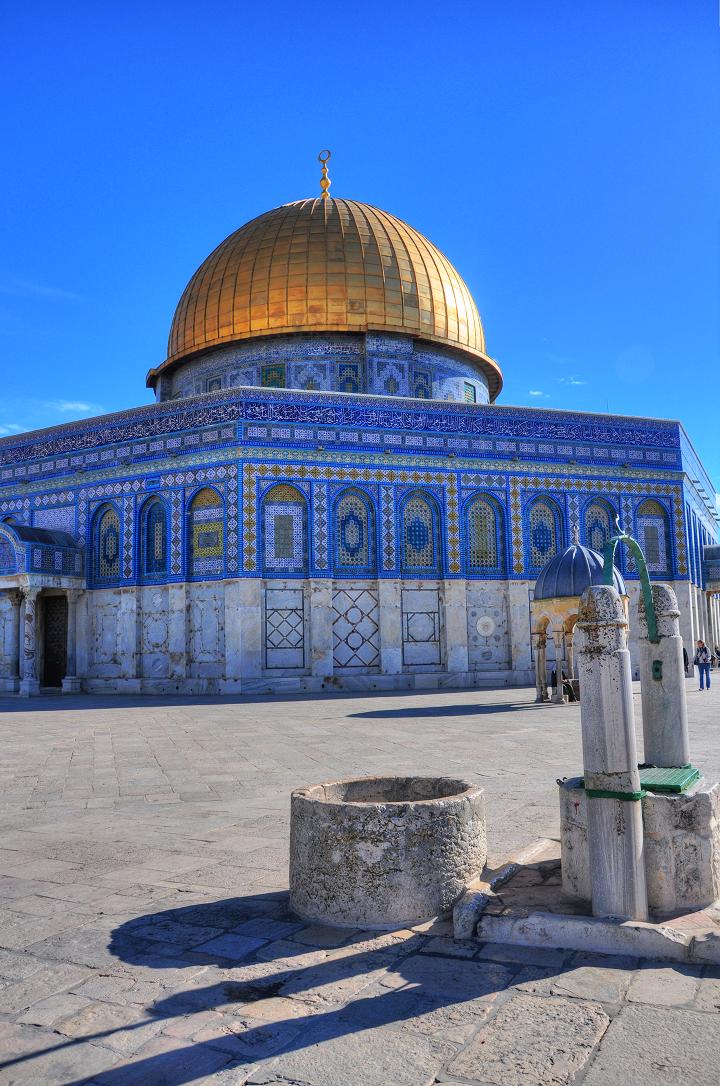 A view of the north-west section from the east side is shown next, with the following structures (from left to right): the northern door of the Dome of Rock (named Garden of Eden); Dome of the Prophet (blue open dome); Dome of ascension (white closed dome), and two other caped structures behind them. 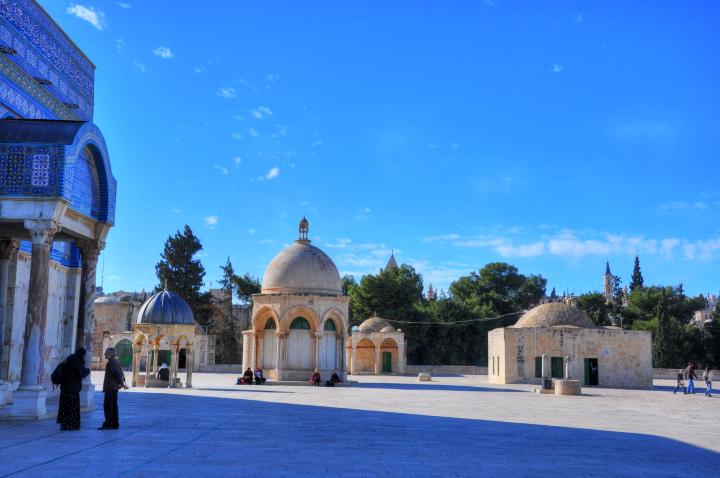 On the north side of the Dome of Rock is an open area, as seen in the picture. Several wells are located around the area in order to provide water to the worshippers.

In the background, on the east side, is Mt of Olives. The northern entrance to the Dome of Rock is also seen on the right side - named the "Garden of Eden" entrance. 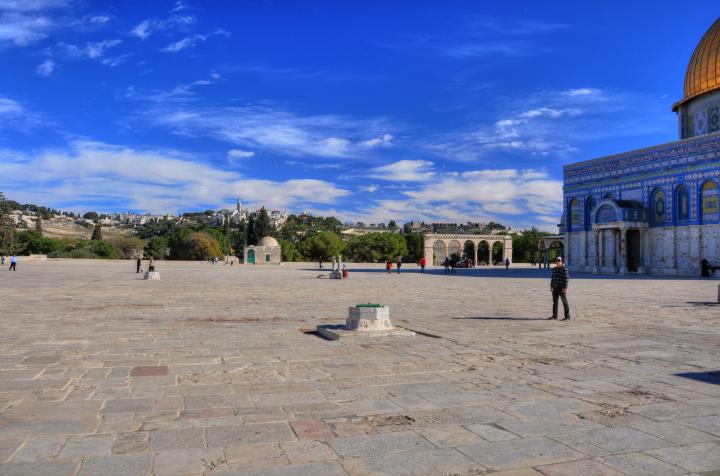 On the north-west corner of the platform stands a small dome. The "el-Khader", a small pointed dome, is supported by arches resting on six tall columns. The 4m x 4m structure  stands above a 50cm high platform on the corner. The name El-Khader (the "Green", meaning the Holy man) is known as the 4th C St. George, a Christian hero. He is  also  referred in the Qur'an as a martyr. According to tradition, George often prayed on the temple mount. This dome became a shrine for Christians and Muslims who came to pray and seek for healing powers.

Behind it, on the north-west wall of the temple mount, is the Ghawanima minaret. It was built in 1297 and repaired in 1327. 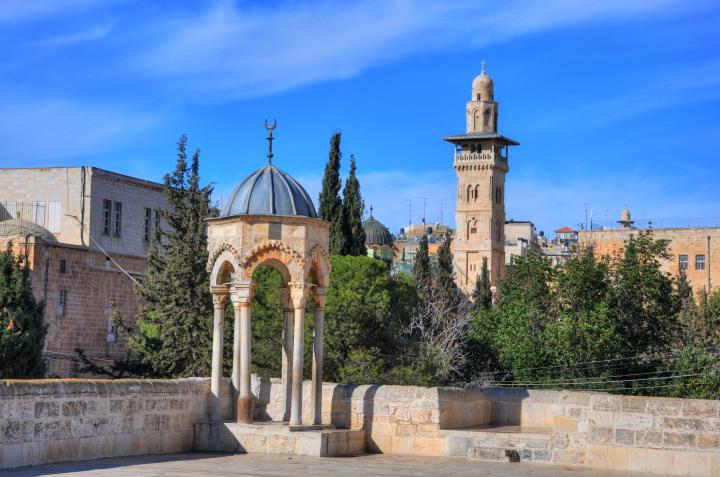 The next photo shows the el-Khader dome from a longer range (on the left side). In the center of the picture is the arched north-west gateway.

On the right side is the Dome of Spirits (Arabic: Qubbat al-Arwah). This 17th C shrine is an open arch dome, supported by 8 slender columns. 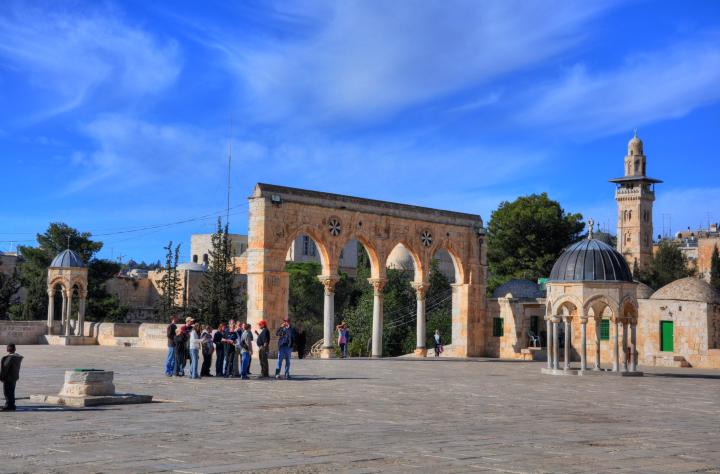 The next picture shows another northern view, with the north gateway on the right. 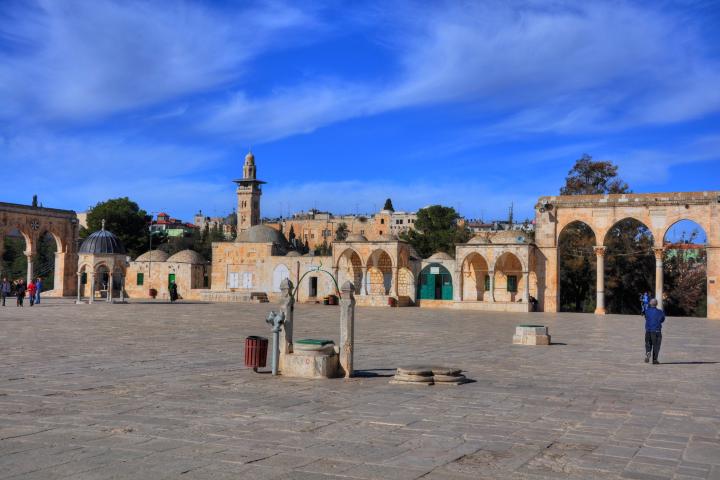 (f) East side: Dome of the chain

The Dome of Chain (Qubat es-Silsila), a domed hexagon with open arches,  is adjacent to the eastern gate of the Dome of Rock, and marks the exact centre of the temple mount. It is the only structure on the east side of the raised platform.

This small mosque (14m in diameter) was built in the 6th or 7th C - just before the construction of the shrine - and is one of the earliest structures on the temple mount. It may have been another structure of Abdul-Malik, who later built the Dome of Rock.

The Dome of the Chain was repaired, and covered with ceramic tiles,  by Suleiman "the Magnificent" (builder of the current Jerusalem walls). The year 1561 is indicated on Suleiman's inscription above  the prayer niche (Mihrab) on its south side. It also praises King David who, according to Muslim tradition, was sitting here as a judge. 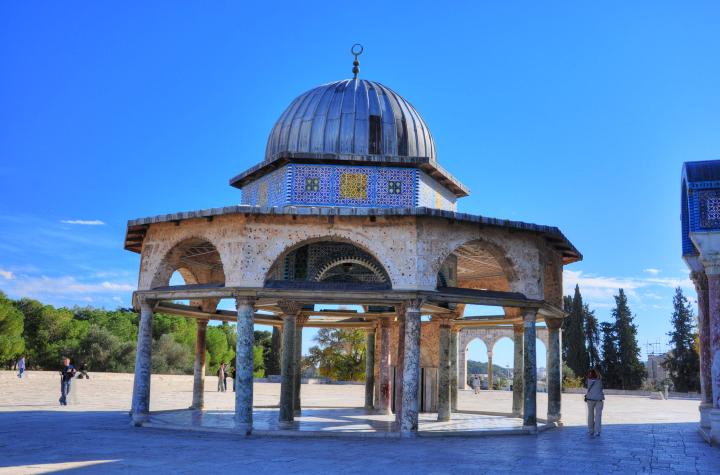 Its name is derived from the chain hanging from the top. The structure stands on a collection of different marble columns and capitols that were reused from older structures. 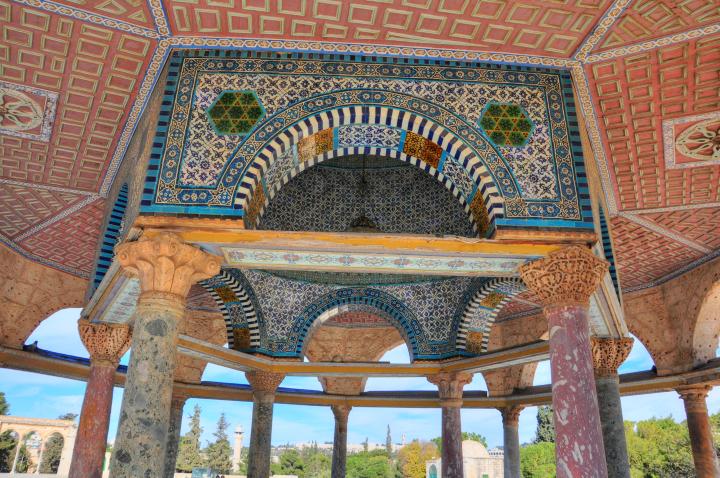 This verse describes the night travel to the remote mosque ("Al-Aqsa"). The rock is where Prophet Muhammad made this journey into the heaven and back to Mecca:

"Glory be to Him Who made His servant to go on a night from the Sacred Mosque to the remote mosque of which We have blessed the precincts, so that We may show to him some of Our signs; surely He is the Hearing, the Seeing".