Excavations in the Jewish quarter in the old city of Jerusalem unearthed a section of the 1st temple wall, built by Hezekiah, during the 8th C BC.

Nehemiah 3 8; "and they fortified Jerusalem unto the broad wall."

Excavations in the Jewish quarter in the old city of Jerusalem unearthed a section of the 1st temple wall, built by Hezekiah, during the 8th C BC. The wall was intended to protect the city against the Assyrians (Ashur). The impressive wall, almost 8M thick and 8M high, strengthened the defense of the city. This is an important archaeological site, since it remapped the Biblical period city, whose boundaries were not known prior to these excavations.

The name of the wall was used in a later time in the history of the city, when Nehemiah returns from the Babylonia exile and rebuilds the wall and the first phase of the second temple. He built the city in a smaller scale, but on the west section he reuses the Hezekiah "broad wall", as written in the Bible (Nehemiah 3 8): "...and they fortified Jerusalem unto the broad wall". According to most scholars, this broad wall is at this site - what remained from the first temple era.

In 701 BC the Assyrians, headed by Sennacherib (ruled 704-681), invaded Israel in order to subdue it to their vast empire. The Assyrian army was lead by Sennacherib, son of Sargon II  (2 Chronicles 32 1): "After these things, and the establishment thereof, Sennacherib king of Assyria came, and entered into Judah, and encamped against the fenced cities, and thought to win them for himself".    (Thanks for P. Szydlowski's correction)

Sennacherib then laid siege on Jerusalem, and called upon Hezekiah to surrender. Hezekiah, protected by the new defense systems, equipped by new upgraded water system (the Gihon tunnel), and blessed by prophet Isaiah and the promise that God will protect Jerusalem - did not comply to the Assyrian's demands. An Assyrian officer attempted to spark a mutiny against the King,  calling the city's defenders to open the gates, but this failed too.

Eventually, another empire managed to capture Jerusalem many years later (Babylon's Nebuchadnezzar II, in 587 B.C.). The city was destroyed and its walls smashed. After 50 years of exile the new emerging empire - the Persians under Cyrus the great - grant them permission to return to the homeland. The returnees, under Ezra and Nehemiah,  rebuilt the walls and reused some of the first temple walls, including the "broad wall" of Hezekiah. The first phase of the second temple is built (516 B.C.). In their account of the reconstruction we can learn on the original plan of the Hezekiah walls.

During the 1970s the Jewish quarter is rebuilt after the city was liberated following the six-day war. Extensive and deep excavations, which were managed by Prof N. Avigad, revealed the history of the wall, and remapped the size of the 1st temple city.

The site is located at Jewish quarter street, in the Jewish quarter inside the old city, and  is lower than the street level.  It is open to the public as an archaeological garden between the quarter's houses. The section of the wall can be seen from an open balcony on two sides of the wall.

A map of the section of the wall in relation to the grand plan is seen in the illustration below. It can also be seen on site above the wall.

The section of the excavated wall is in the center of the map, located in a transversal valley between the western hill and the temple mount. This weak point required building a high wall in order to protect the City of David from the north-west side.

The 1st temple wall is shown in a dashed brown line, since most of this wall was not found. Only the solid brown sections were excavated - on the east and the north sides. The Jewish quarter section excavation was therefore an important archaeological event since it bounded the north-west side of the city at the Biblical 8th C BC era. 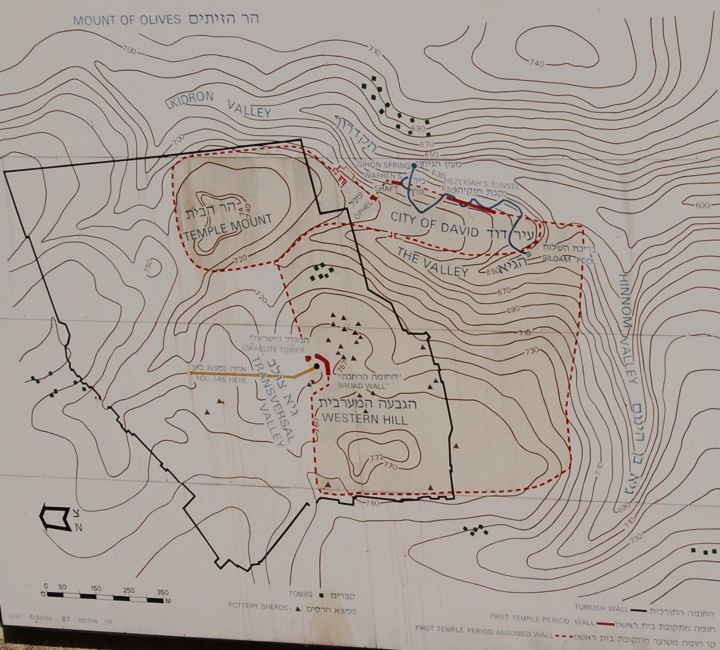 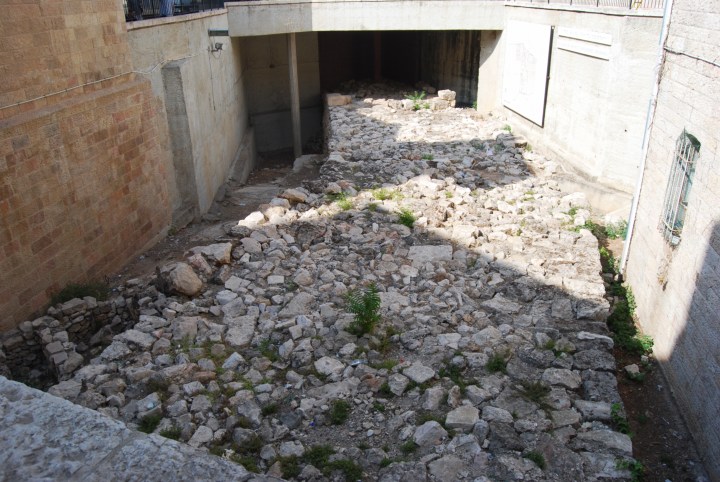 A closer detail of the wall. The wall is made of rough stones that were placed on top and sides of each other. 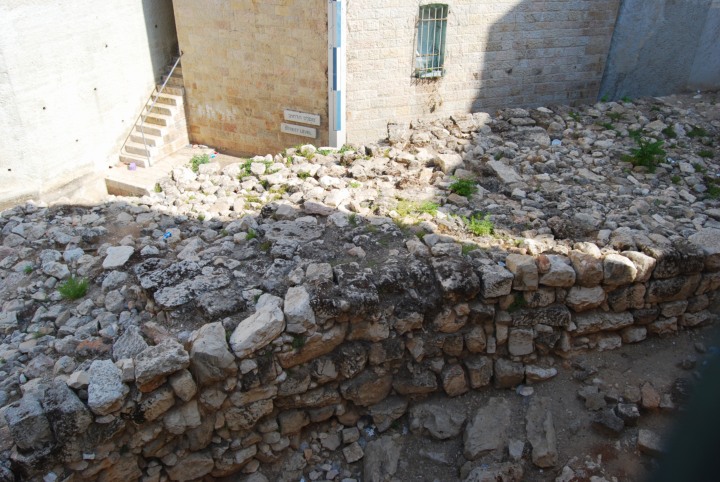 The markings on the wall of the modern house, seen in the photo below, indicate the street level (at the base of the house) and the estimated top of the wall (at the level of the windows). The blue vertical strips on the scale at the corner of the house are 1M each. The estimated height of the Biblical wall: 8M high! Indeed, an impressive defense. 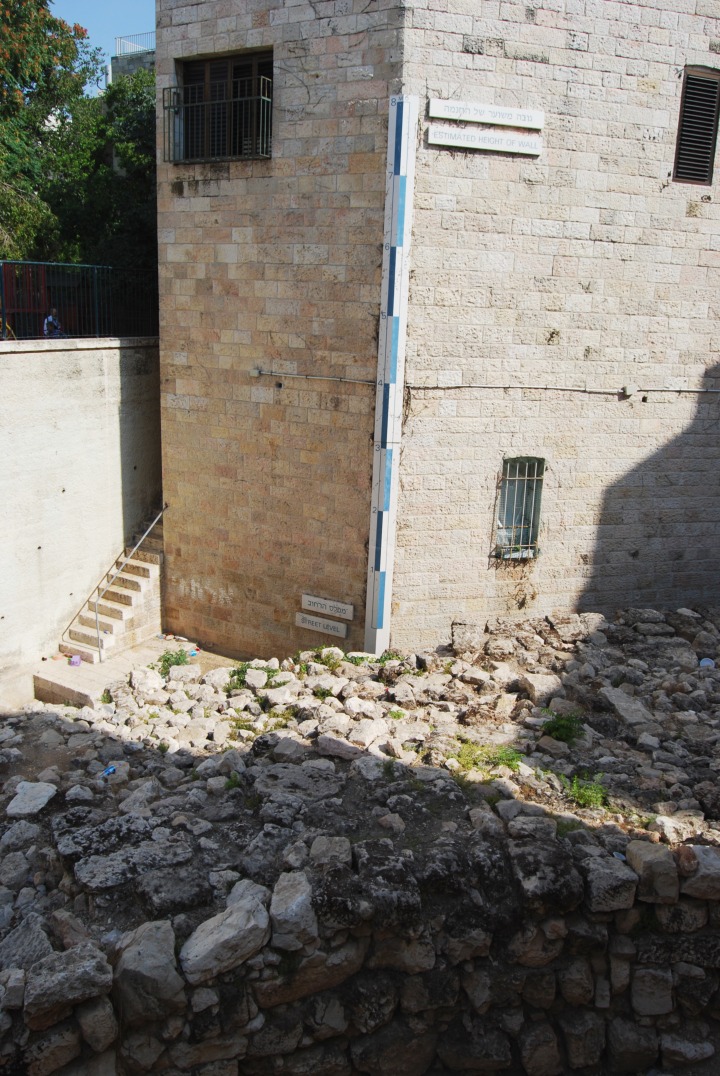 The Bible provides a detailed description of the Assyrian (Ashur) campaigns. The following are  selected texts from 2:Kings, arranged in the order of the historical events. Note that there are also parallel sections in 2:Chronicles, and only one text was included from that book.

"And the LORD was with him; and he prospered whithersoever he went forth: and he rebelled against the king of Assyria, and served him not".

The Assyrians conquered and exiled the North Kingdom (at about 722 BC):

"And it came to pass in the fourth year of king Hezekiah, which was the seventh year of Hoshea son of Elah king of Israel, that Shalmaneser king of Assyria came up against Samaria, and besieged it. And at the end of three years they took it: even in the sixth year of Hezekiah, that is in the ninth year of Hoshea king of Israel, Samaria was taken. And the king of Assyria did carry away Israel unto Assyria, and put them in Halah and in Habor by the river of Gozan, and in the cities of the Medes: Because they obeyed not the voice of the LORD their God, but transgressed his covenant, and all that Moses the servant of the LORD commanded, and would not hear them, nor do them".

The Assyrians conquered almost all of Judea cities in 701 BC, except for Jerusalem, where King Hezekiah  held up behind the city's defenses. Hezekiah stroke a deal with the Assyrians, paid them off with heavily, thus escaping the bad fate of the North Kingdom and other cities in Israel:

This text describes the fortifications made by Hezekiah, in preparation to the siege:

"Also he strengthened himself, and built up all the wall that was broken, and raised it up to the towers, and another wall without, and repaired Millo in the city of David, and made darts and shields in abundance".

Isaiah the prophet promised Hezekiah that he will overcome the mighty Assyrians. It is interesting to read these Biblical texts and see how both sides tried to show which God is stronger and will provide them the victory. We recommend to read the entire chapters to fully enjoy the story.

"Then Isaiah the son of Amoz sent to Hezekiah, saying, Thus saith the LORD God of Israel, That which thou hast prayed to me against Sennacherib king of Assyria I have heard. This is the word that the LORD hath spoken concerning him; The virgin the daughter of Zion hath despised thee, and laughed thee to scorn; the daughter of Jerusalem hath shaken her head at thee".

God's promise of victory materialized. The Assyrians suffered from a epidemic with 185,000 dead overnight.  The Assyrian's siege failed and they retreated.

"Therefore thus saith the LORD concerning the king of Assyria, He shall not come into this city, nor shoot an arrow there, nor come before it with shield, nor cast a bank against it. By the way that he came, by the same shall he return, and shall not come into this city, saith the LORD. For I will defend this city, to save it, for mine own sake, and for my servant David's sake. And it came to pass that night, that the angel of the LORD went out, and smote in the camp of the Assyrians an hundred fourscore and five thousand: and when they arose early in the morning, behold, they were all dead corpses. So Sennacherib king of Assyria departed, and went and returned, and dwelt at Nineveh".

The prophet's book contains the details of his prophecy and also relates to the fortification of the city.

"The vision of Isaiah the son of Amoz, which he saw concerning Judah and Jerusalem in the days of Uzziah, Jotham, Ahaz, and Hezekiah, kings of Judah".

These chapters repeat the 2:Kings texts above.

Isaiah tells about the construction of the wall and the need to break down some of the houses in order to lay out the new walls.

"And ye have numbered the houses of Jerusalem, and the houses have ye broken down to fortify the wall".

Nehemiah rebuilds Jerusalem after the exiles return to Jerusalem, about 200 years later than Hezekiah. They found the walls and the city in a sad shape ("...how Jerusalem lieth waste").

"Then said I unto them, Ye see the distress that we are in, how Jerusalem lieth waste, and the gates thereof are burned with fire: come, and let us build up the wall of Jerusalem, that we be no more a reproach"

In the descriptions of the construction there are passages that refer to the "broad wall". The returnees reused sections of the older wall in their reconstructed city.

"Next unto him repaired Uzziel the son of Harhaiah, of the goldsmiths. Next unto him also repaired Hananiah the son of one of the apothecaries, and they fortified Jerusalem unto the broad wall."