This grand monument is built into the rock on the foothills of Mount of Olives. The bible tells us that this is the tomb of Avshalom (Absalom), son of David, who was killed by David's men after a failed mutiny. 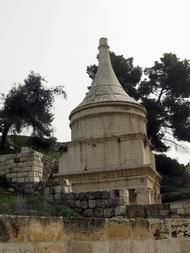 The Tomb of Avshalom (Absalom) is a grand monument in the upper Kidron valley (Yehoshafat valley), on the foothills of Mount of Olives, and facing the temple mount.

The tomb is built on the lower western foothills of  Mount of Olives, facing the old city of Jerusalem, on the eastern side of Kidron valley.  This entire area is a large cemetery with thousands of tombs, and this is one of the famous and largest of all.

He later came to rest in this monument.  According to the Bible, the tomb was built by Avshalom himself in his lifetime, since he had no sons who would build the tomb.  Note that this passage contradicts Chapter 14 where we were told he had 3 sons, but maybe they died earlier, or were not worthy of erecting this memorial.

"Now Absalom in his lifetime had taken and reared up for himself a pillar, which is in the king's dale: for he said, I have no son to keep my name in remembrance: and he called the pillar after his own name: and it is called unto this day, Absalom's place".

According to legend, on top of the top of the tomb was a hand, since in Hebrew the hand (Yad) means "memorial". Later it was removed, maybe blown away, as a protest of the son's acts against his father.  For 3,000 years the site was covered by small rocks, thrown on the tomb by visitors that showed their disgust against the acts of the son raising against his father. In 1925 the area was cleaned and the stone piles were removed.

In 2003 a 4th C AD Greek inscription was detected on the facade of the tomb, which refers to the father of John the Baptist. It reads "This is the tomb of Zachariah, martyr, very pious priest, father of John". It was added by Byzantine Christians who identified the tomb as the tomb of John's father.  [Thanks to David Adams who added this note]

The entire tomb is cut into the natural rock and is indeed a remarkable memorial. The bible tells us that Avshalom was one of the beautiful men in his lifetime with long hair, and this royal structure indeed captures this beauty and the long hair (the tall head) .

The monumental tomb has an elegant design:  the lower part of the monument is a square base, and top of of it is a 3M round drum. On the top section is a concaved cone with a flower engraved on its top.

This design is attributed to 1st C AD structures, and so the memorial may have been constructed at later times than the lifetime of Avshalom (a thousand years earlier).

Over time monuments, buildings and trees have been erected to memorialize someone's passing. While a massive structure can sometimes symbolize that person's great accomplishments, memorial trees can be a symbol of new grown life to honor those that have died and in doing so, their memory lives on.

(a) Mount of Olives:

The monument is located on the bottom of the ancient cemetery of Mount of Olives, in the valley of Jehoshaphat. 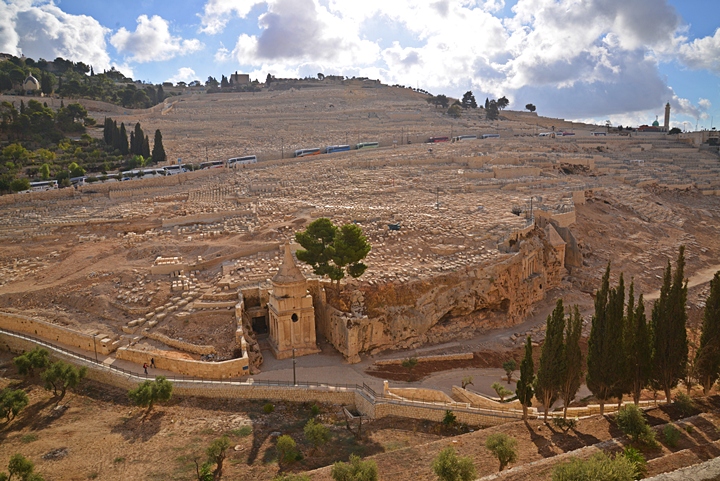 A closer view of the tomb and the cemetery is seen in the next photo. Notice the size of the monument in relation to the visitors walking near it. 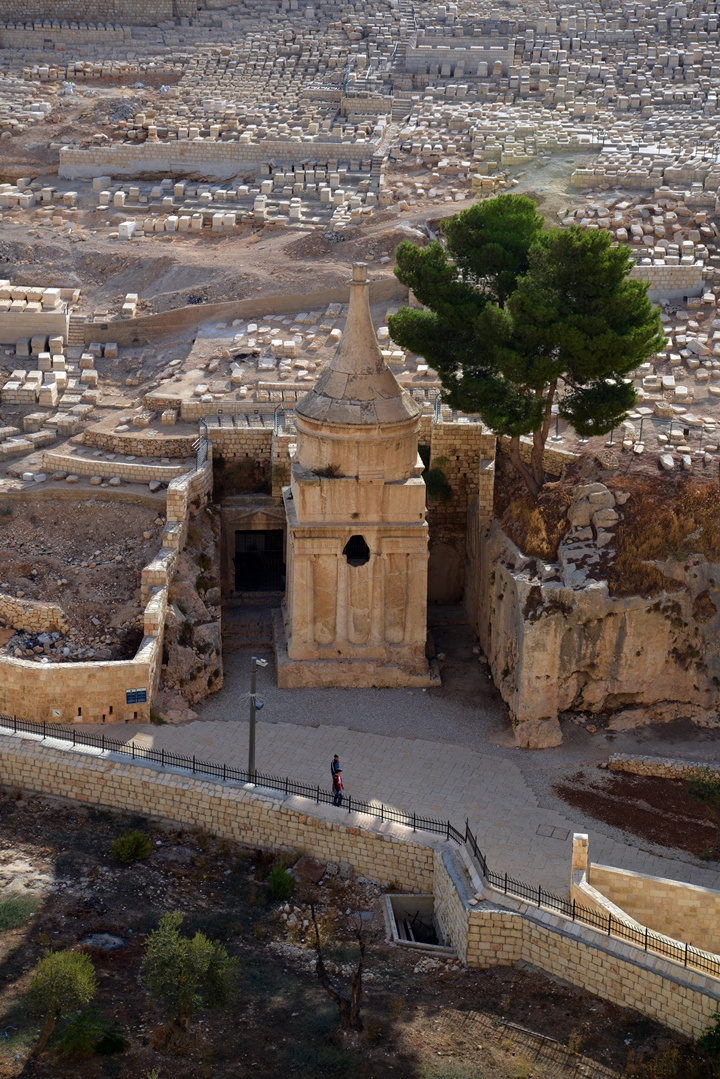 A view of the front of the  tomb is shown in this photo. 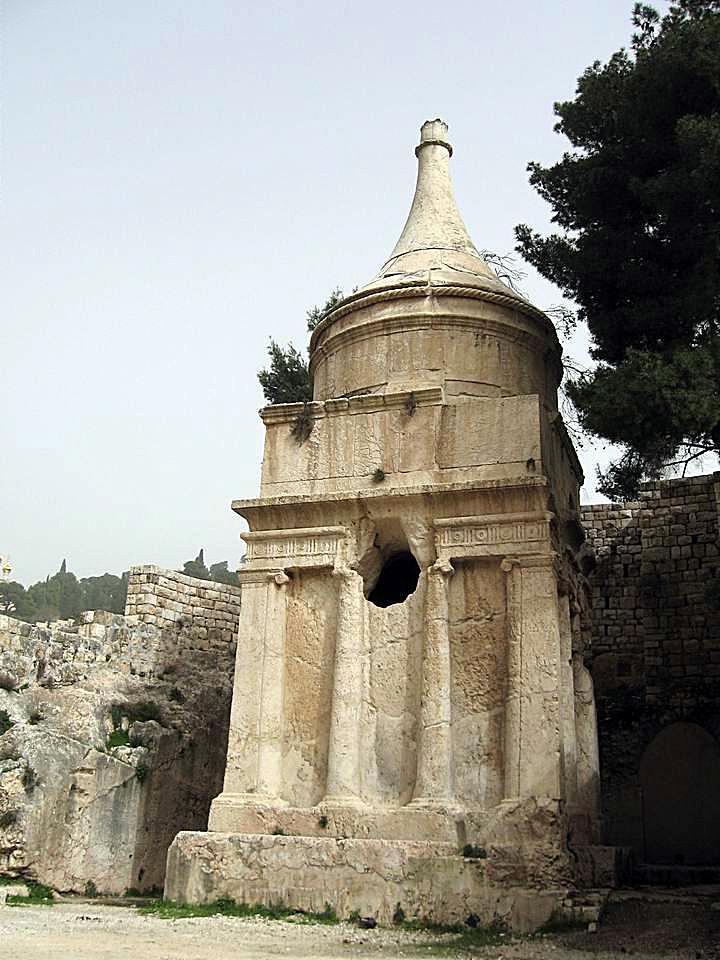 The north side of the tomb is shown below. On the rock behind the tomb is another set of rock-cut tombs, called Maarat  Yehoshafat - cave of King Jehoshaphat.  It is a cluster of burial caves, and consists of 8 chambers. The entrance to these caves is closed with an Iron gate. This burial cluster  may have been built at the same time of the front structure -  at the 1st C AD. 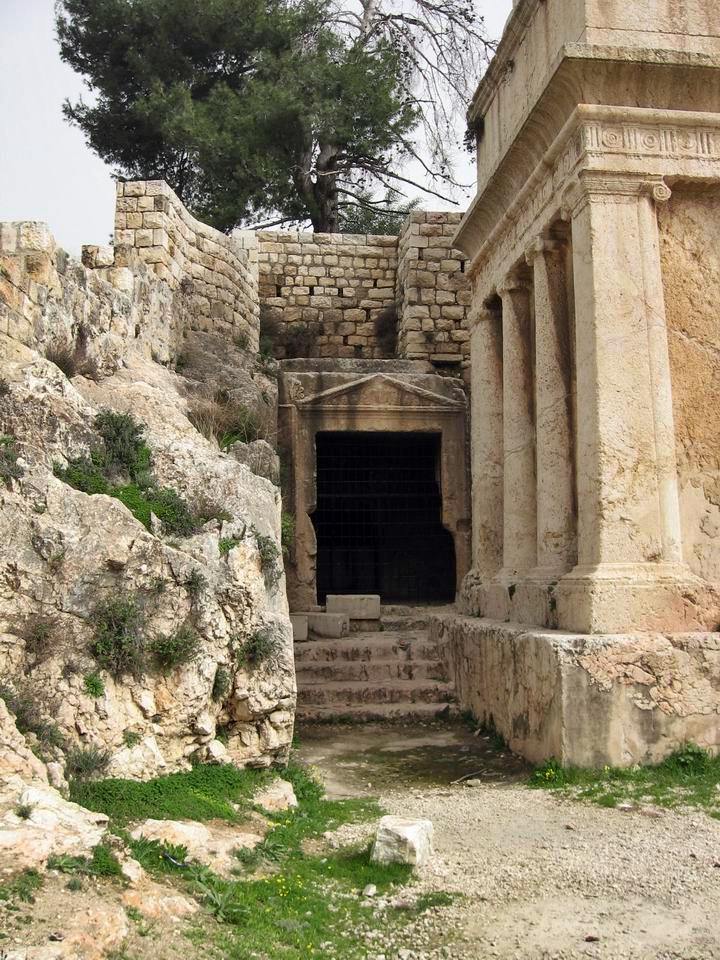 Another view from the rear, looking up. 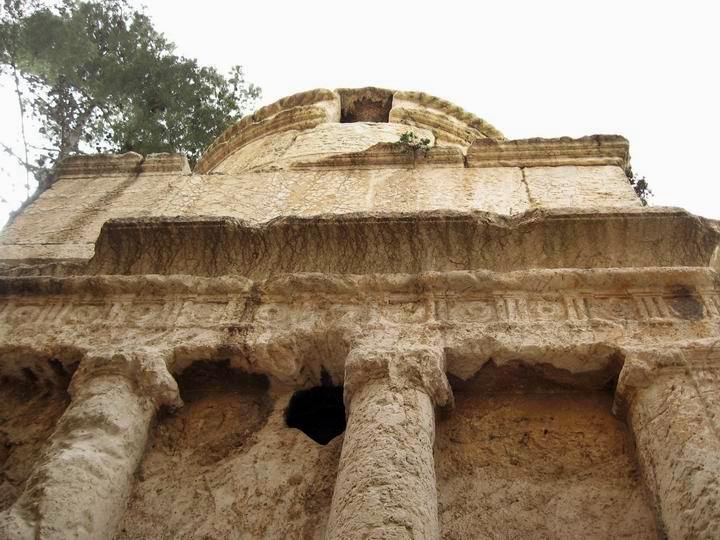 In June 2010, as part of the Jerusalem Light Festival, the tomb was illuminated with special effects. The following photo is a sample of the illuminated tomb, with Mt Olives in the background. 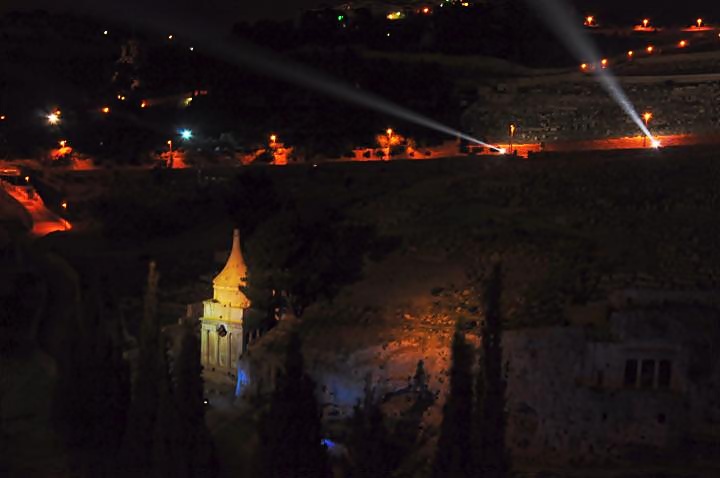 Avshaolm first appears in the bible in this chapter - the 3rd son of David,  a grandson of Talmai from Geshur, a kingdom north-east of the Jordan.

"And his second, Chileab, of Abigail the wife of Nabal the Carmelite; and the third, Absalom the son of Maacah the daughter of Talmai king of Geshur;"

Avshalom was a beautiful prince, with long hair:

"But in all Israel there was none to be so much praised as Absalom for his beauty: from the sole of his foot even to the crown of his head there was no blemish in him. And when he polled his head, (for it was at every year's end that he polled it: because the hair was heavy on him, therefore he polled it:) he weighed the hair of his head at two hundred shekels after the king's weight.".

Avshalom led a mutiny against his father, King David, and crowned himself in Hebron. After David's men managed to defeat his troops, Avshalom fled away on a donkey. However, his long hair caught on the branches of a large oak, and he was caught midair.

Yoav (Yoab), David's commander, was told on this, and he wounded him with 3 spears in the heart, then his men killed Avshalom, in spite of David's orders to spare "the boy".

"And Absalom met the servants of David. And Absalom rode upon a mule, and the mule went under the thick boughs of a great oak, and his head caught hold of the oak, and he was taken up between the heaven and the earth; and the mule that was under him went away. And a certain man saw it, and told Joab, and said, Behold, I saw Absalom hanged in an oak. And Joab said unto the man that told him, And, behold, thou sawest him, and why didst thou not smite him there to the ground? and I would have given thee ten shekels of silver, and a girdle. And the man said unto Joab, Though I should receive a thousand shekels of silver in mine hand, yet would I not put forth mine hand against the king's son: for in our hearing the king charged thee and Abishai and Ittai*, saying, Beware that none touch the young man Absalom. Otherwise I should have wrought falsehood against mine own life: for there is no matter hid from the king, and thou thyself wouldest have set thyself against me. Then said Joab, I may not tarry thus with thee. And he took three darts in his hand, and thrust them through the heart of Absalom, while he was yet alive in the midst of the oak. And ten young men that bare Joab's armor compassed about and smote Absalom, and slew him".

* Webmaster note: My brother, Itai, is mentioned in this text.  Ittai (from the city Gat) was David's close allay, and commanded 600 men.

Avshalom was initially buried by Yoav (Yoab) in a pit near the battlefield, which is located near the Gilad (west to the Jordan river). Later, he was buried in the grand monument called Yad-Avshalom (the featured site), which according to the bible was built by Avshalom himself before he died.

"And they took Absalom, and cast him into a great pit in the wood, and laid a very great heap of stones upon him: and all Israel fled every one to his tent. Now Absalom in his lifetime had taken and reared up for himself a pillar, which is in the king's dale: for he said, I have no son to keep my name in remembrance: and he called the pillar after his own name: and it is called unto this day, Absalom's place".

This text descibes the Kingdom of Jehoshaphat, the 4th King in Judah. The cluster of burial caves behind Avshalom tomb is called Ma'arat Yehoshafat (the cave of Jehoshaphat).

"And Jehoshaphat his son reigned in his stead, and strengthened himself against Israel. And he placed forces in all the fenced cities of Judah, and set garrisons in the land of Judah, and in the cities of Ephraim, which Asa his father had taken. And the LORD was with Jehoshaphat, because he walked in the first ways of his father David, and sought not unto Baalim;

Josephus, the commander-turned-historian, wrote in the 1st C AD that the marble pillar is 2 furlongs (400M) from Jerusalem, which is where the site is located.

"Now Absalom had erected for himself a marble pillar in the king's dale, two furlongs distant from Jerusalem, which he named Absalom's Hand, saying, that if his children were killed, his name would remain by that pillar; for he had three sons and one daughter, named Tamar, as we said before, who when she was married to David's grandson, Rehoboam, bare a son, Abijah by name, who succeeded his father in the kingdom; but of these we shall speak in a part of our history which will be more proper. After the death of Absalom, they returned every one to their own homes respectively".