Akhbara was a Roman period village, fortified by Josephus Flavius. An impressive 100m high cliff ("the Rock of Akhbara") soars above the valley, dotted with caves.

Akhbara was a Roman period village in the Upper Galilee area, 3km south of Zefat. An impressive 100m high cliff ("the Rock of Akhbara") soars above the valley, dotted with caves. It was one of the villages that were fortified by Josephus Flavius in the wake of the great  revolt against the Romans.

This aerial map indicates the major points of interest around the site.  The site is located to the south of the city of Zefat. Access to the ancient site and to the panoramic view of the cliff is from the south east side of the village. 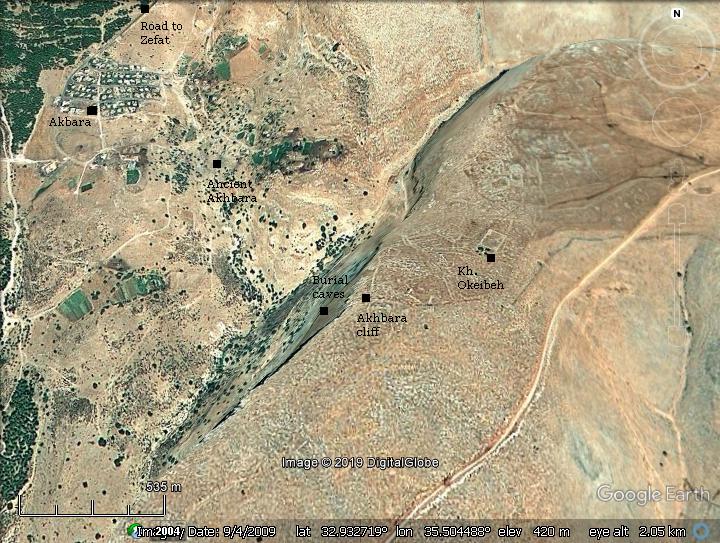 According to the pottery surveyed in the site, the settlement was established on the steep hill west of the valley during the Iron Age. The farming village centered around the spring of Ein Akhbrara.

Akhbara was fortified during the great revolt against the Romans by Josephus Flavius (66 AD). Josephus, the commander turned historian, wrote about his fortification (Wars 2, 20:6): "Josephus ... he built walls about the caves near the lake of Gennesar, which places lay in the Lower Galilee; the same he did to the places of Upper Galilee, as well as to the rock called the Rock of the Achabari".

After the war, a Jewish village existed here near the spring of Ein Akhbara, and was famous of the rabbis who taught here and buried in the caves. Akhbara is mentioned in rabbinic literature on the writings and activities of sages during the late Roman period, most notably R. Yannai who founded and headed a Beit Midrash (house of learning) here. The Jewish village continued until the Middle Ages.

The location of the site is indicated on the Biblical map by a red square. 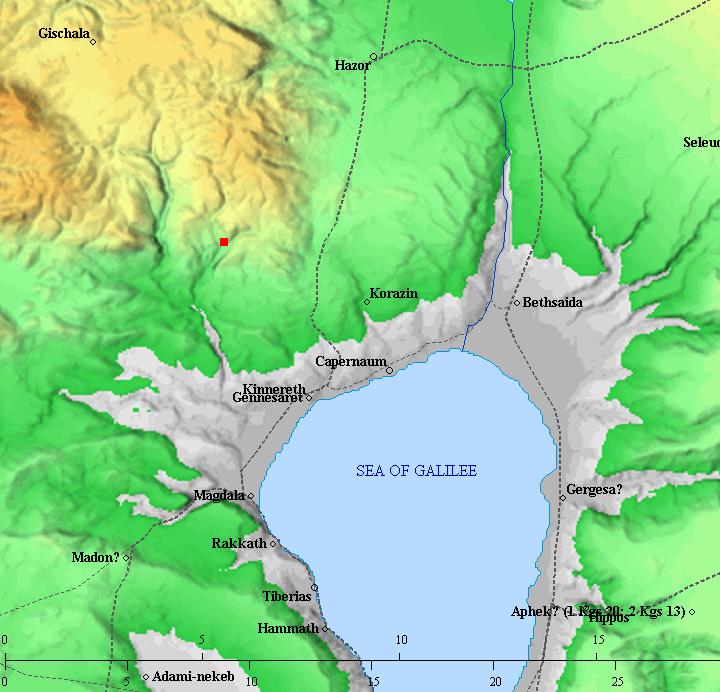 Roads and cities during the Israelite period thru the Roman periods (based on Bible Mapper 3.0)

According to surveys, the pottery on both areas can be dated to the Iron age, Persian/Hellenistic, Roman-Byzantine and Crusader/Mameluke/Ottoman periods. The settlement started on the western hill and then expanded to the eastern area. The majority of ceramics are dated to the Late Roman period in both areas. During the Byzantine period the settlement remained only on the western hill. It then thinned  during the 1st half of the 6th century AD.

As for the fortifications of Josephus, scholars debate whether the site was on the cliff itself above the caves ('the Rock of Akhbara'), or on the hill in Akhbara-West. 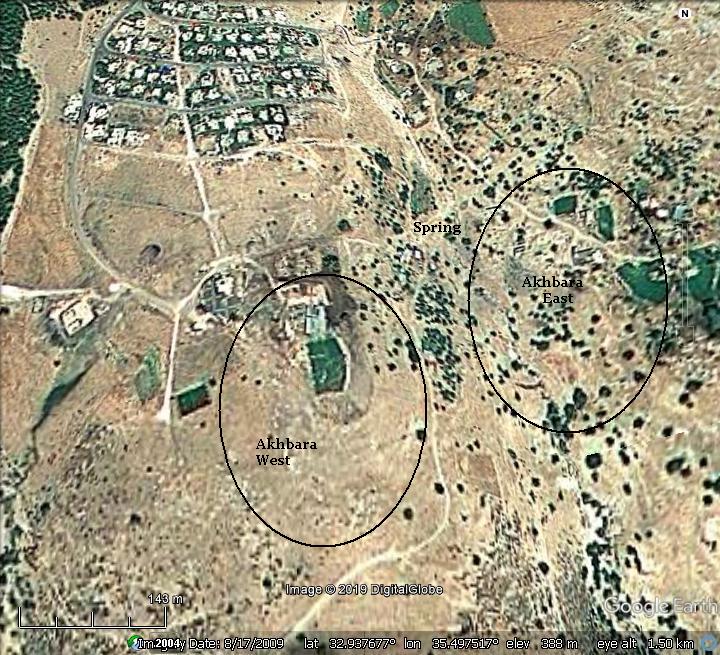 The old Arab village of 'Akbara was blown up and destroyed during the 1948  independence war. Today, a modern Arab village bearing the same name - 'Akbara - is located here in a newly built area. It was built in the 1980s about 0.5 km north-west of the ruins of the old Arab village. 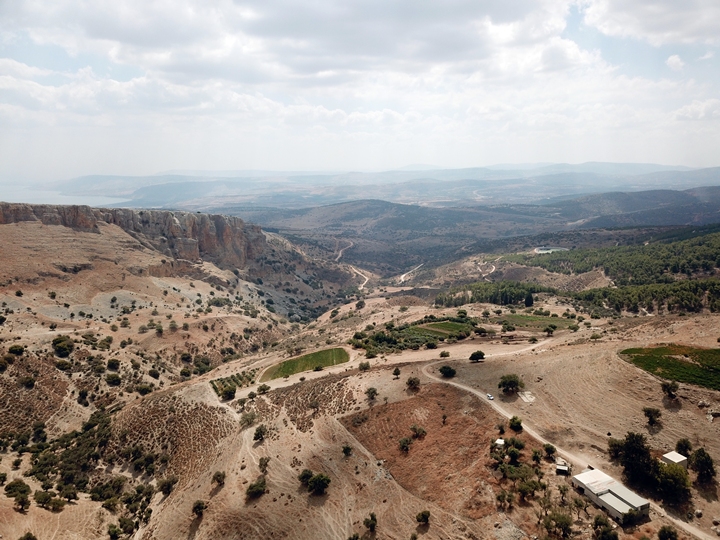 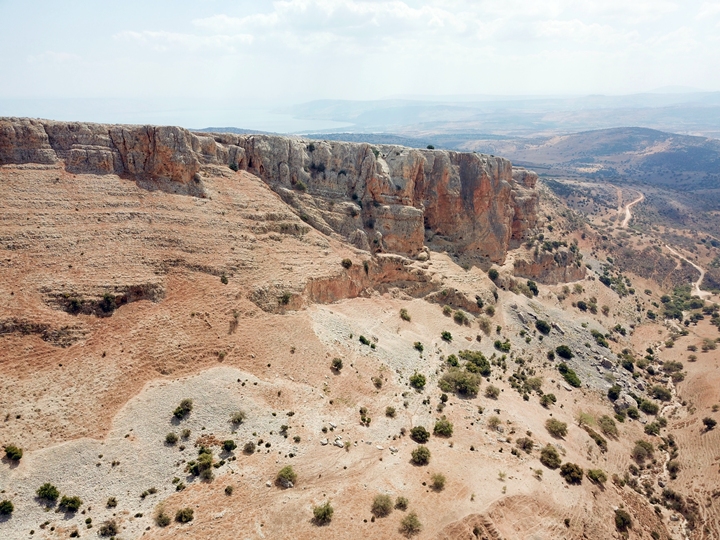 The small modern Arab village of 'Akbara is situated north west of the cliff. On its south side is the golden dome of the mosque. Behind, in the far background, is the large bridge that crosses the valley. Above it are the southern neighborhoods of Zefat. 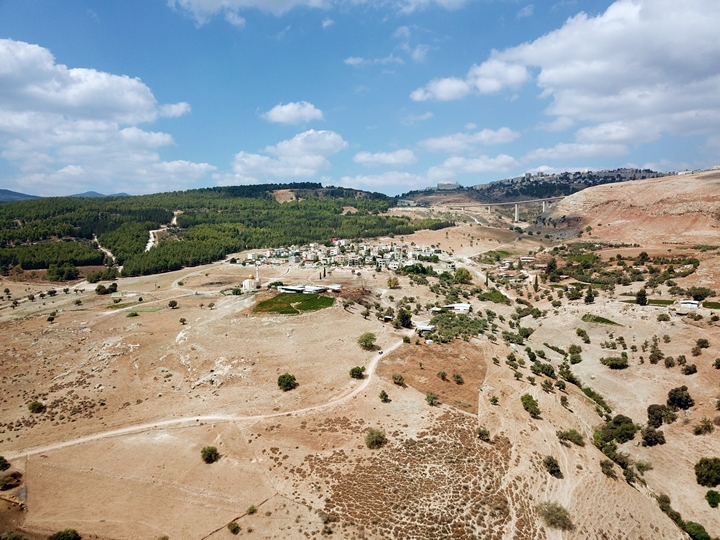 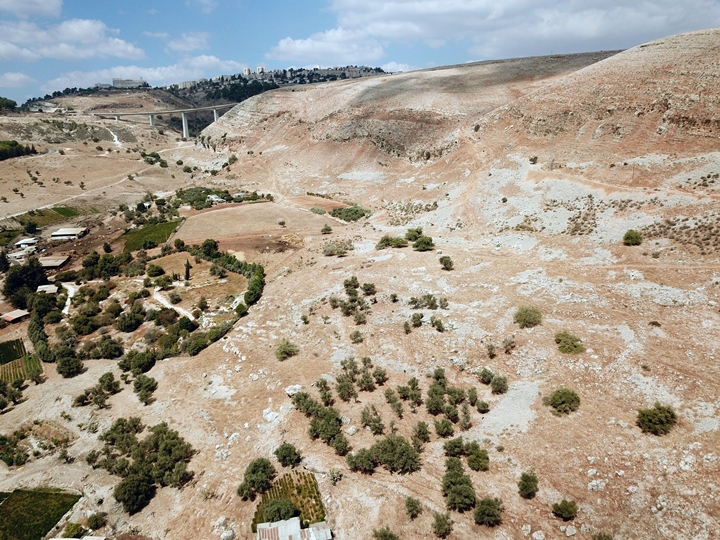 The following YouTube video shows a flight of a drone around the site. The drone first flies over the edge of the village and the spring of Ein Akhbara. It then turns south towards the "Rock of Akhbara". The Sea of Galilee is seen in the far background.

The next sections show views from the ground level.

From the foothills of the west hill is a great panoramic view of the area. The cliffs of the Rock of Akhbara rise above the valley.

Along the foothills are hundreds of Squill flowers (Hebrew: Hazav). The squill flowers at the end of the summer, signaling the beginning of the Autumn season. Their bulbs hold the ground firmly and are useful as markers.  The squills are found in many ancient sites, as the bulbs were used to mark the boundaries between houses and lots. A legend has that  Joshua used the squill bulbs  to mark the borders between the tribes. 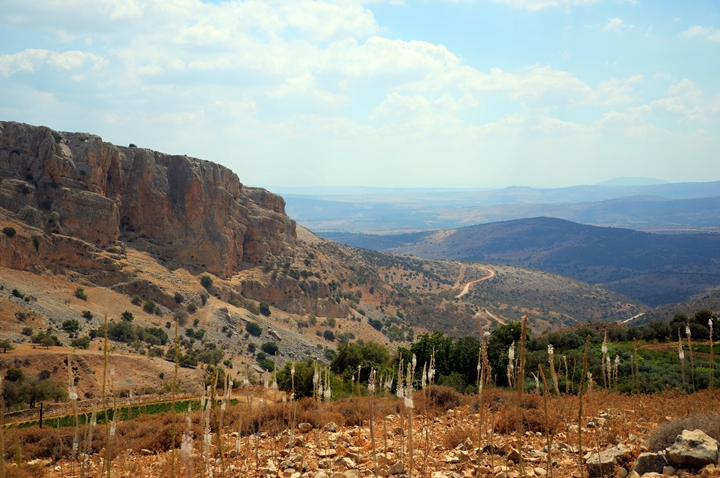 A closer view of the cliff is next. It is dotted with dozens of holes and caves. Birds nest in the cavities and there is a constant buzz of birds flying in and out of their nests. 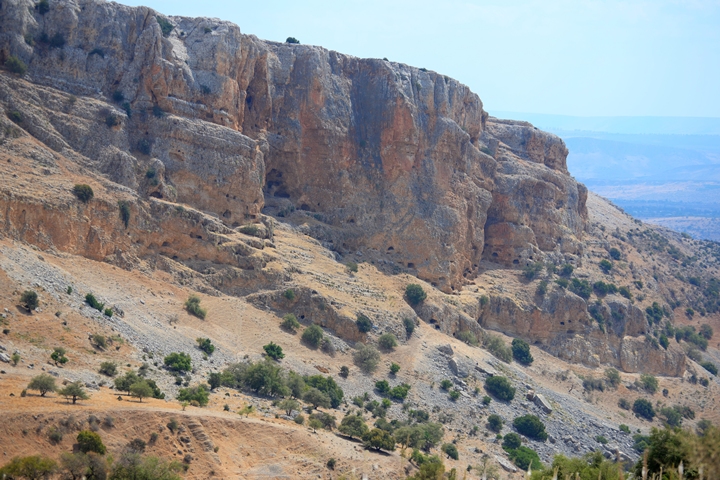 A closer view of the impressive cliff: 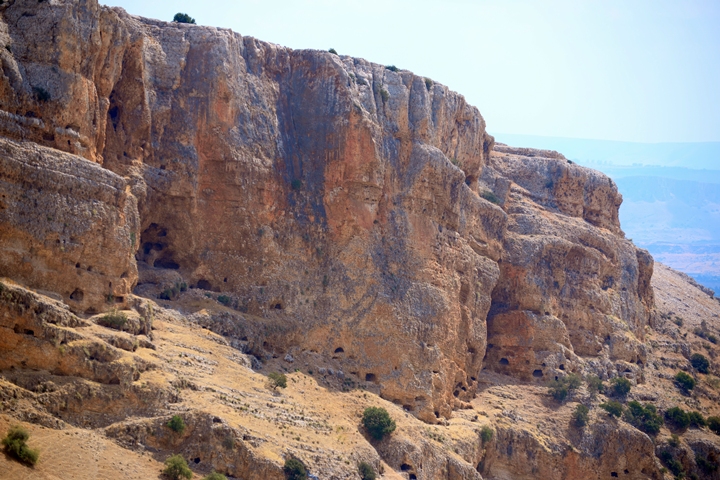 Inside one of the largest cave are tombs of several famous sages. 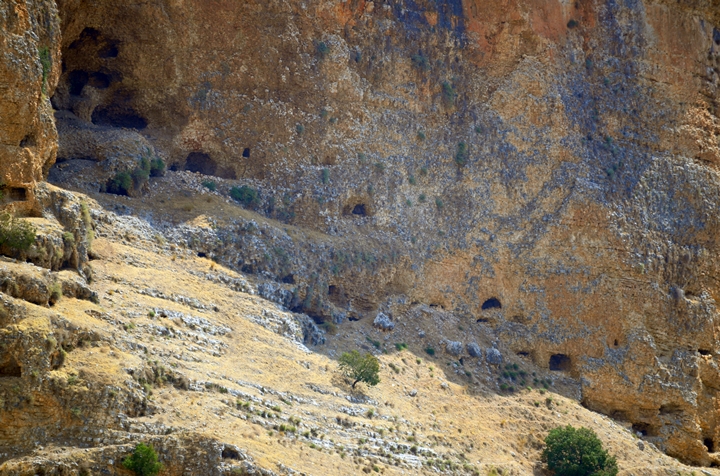 The ruins of the Roman period village are spread on both sides of the spring of Ein Akhbara. This photo is  a view from the west hill towards the eastern area, with the spring inside the valley. 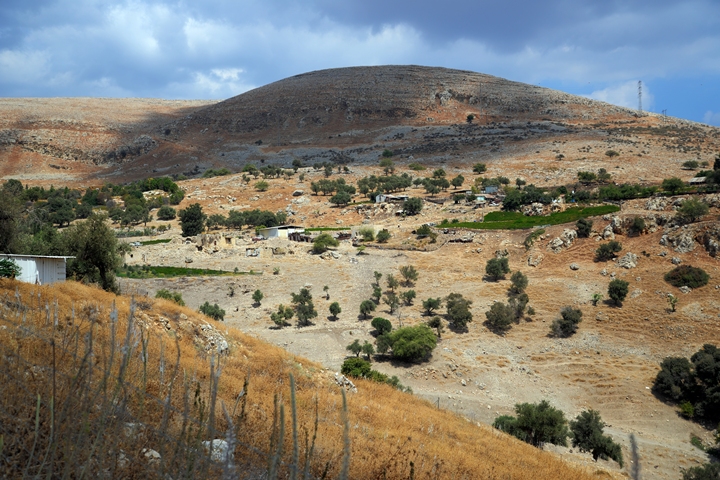 On the east side of the valley are scattered ruins of structures. These were the old buildings of the Arab village that were blown up during the Independence war. The ruins were built over the structures of the Roman village, reusing some of the stones. 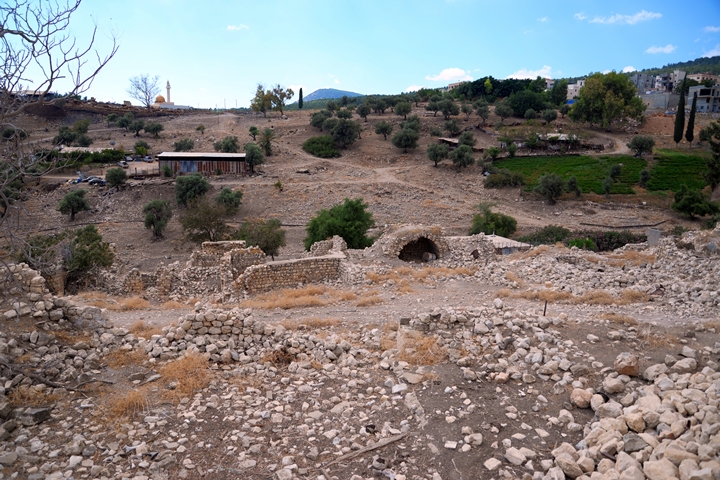 Inside the valley of Nahal Akhbara is a painted rock.  The turquoise color signals a holy Jewish place - a marker for the tombs of 3 sages of ancient Israel  - R. Yannai of Akhbara (3rd century sage), R. Nehorai (2nd century AD) and R. Dostai Bar Yannai. A sign is located on the large rock,  naming the 3 sages.

The marker replaces an actual tomb, as their actual resting place is not known. Religious Jews  come to the place to pray and honor the great sages and read from their writings. 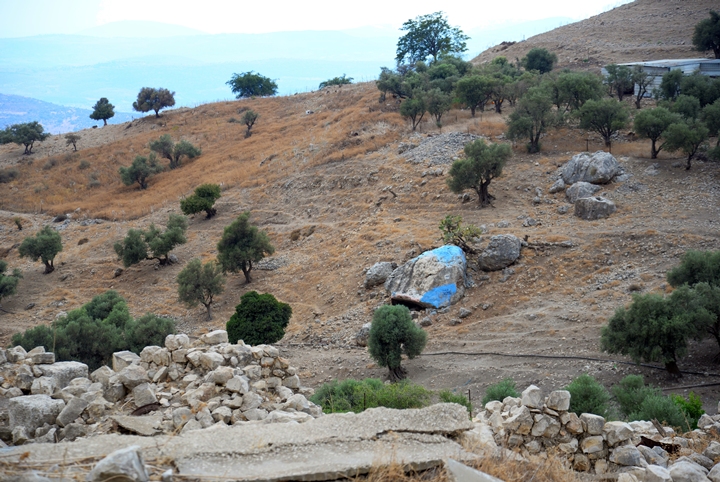 The following photos captured views of the ruins. 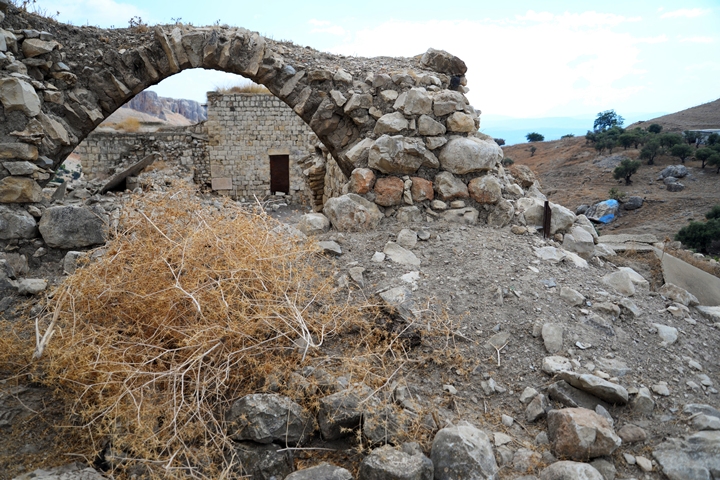 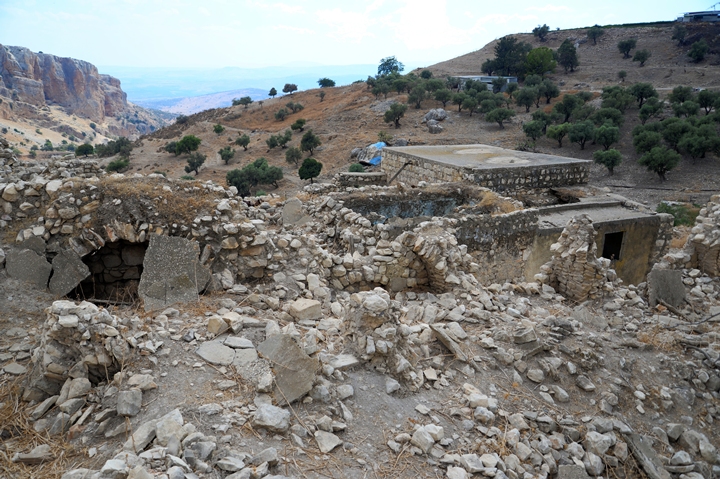 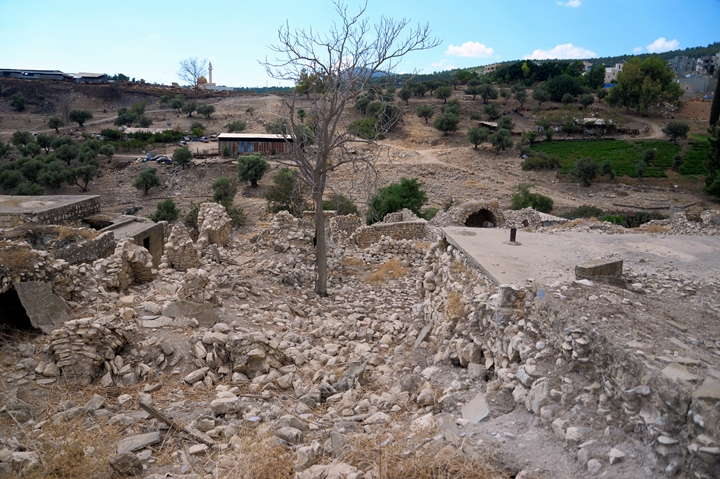 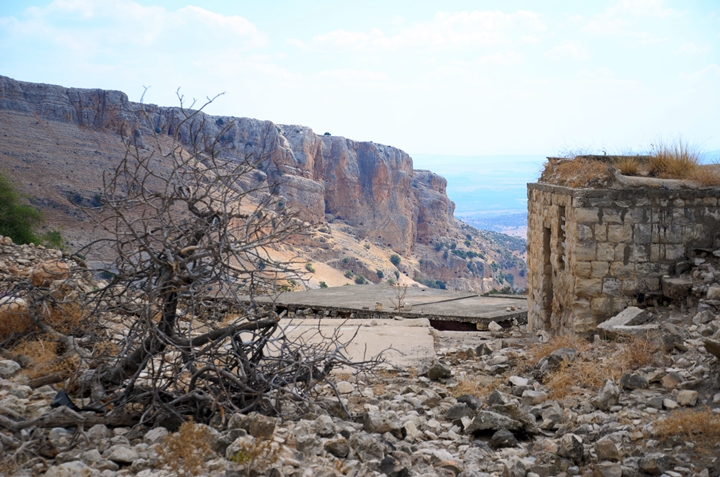 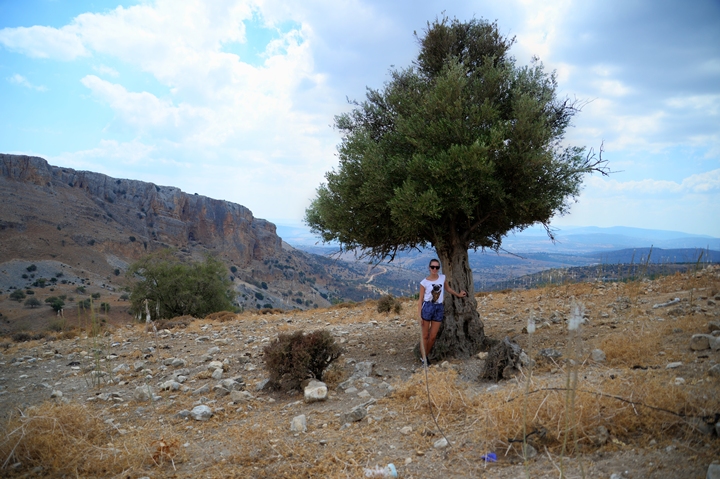 Amit posing under the olive tree. This place offers one of the most impressive views in the Upper Galilee.