Tel Achziv is a major Northern coastal Biblical city with a history of over 30 centuries;  located on the outlet of Kziv creek close to the border with Lebanon.

Joshua 19 29: "And the fifth lot came out for the tribe of the children of Asher ... and the outgoings thereof are at the sea from the coast to Achzib".

Tel (mound) Achziv is a coastal Canaanite, Biblical, Phoenician and Arabic city that is located on a Kurkar (sandstone) hill near the outlet of Kziv creek, and close to the border with Lebanon. Today it is a national park with a public beach and private resorts.

A  map of Tel Achziv is shown below (indicating the major points of interest). 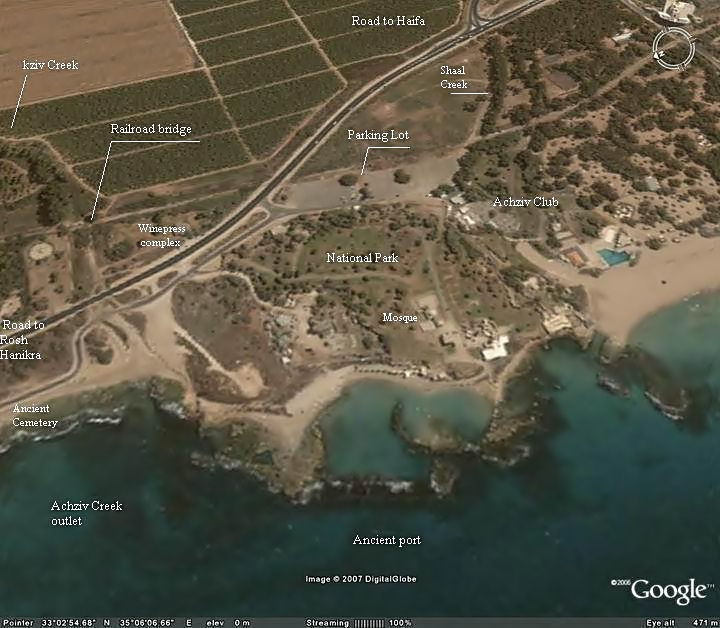 Achziv has a rich history, and was a major border city in most of the known periods.

According to the Bible (references) the city was allotted to the Asher tribe territory. However, it was not taken by the Israelites due to its strong fortifications and topographic position between 3 water flows (Kziv on the north, Shaal on the south, Med sea on the west).

Later, King David (1006-968 BC) and Solomon (968-928 BC) added the city into their Kingdom, but returned it to Hiram as part of the famous pact with King Solomon. Ever since the city became one of the Phoenician cities, under the control of Tyre and Sidon. According to the archaeological evidence, the ancient city existed in the  Iron Age II (11th-6th Century BC).

The city flourished during the Persian period (6th-4th century BC) and the Hellenistic period (4th-1st Century BC). The Phoenicians, under the Persian and Hellenistic control, used the port for marine commerce and the coastal road for trade.  Five Large cemeteries are located 1KM east to the Tel (e-Ras), north, and 700M south to it (el-BukBuk). In the rock-hewn tombs were ceramics from the Iron and Persian periods, including several Phoenician tombstones.

The number of Roman sites around Achziv reached a peak, and Achziv benefited from the marine and land trade. The city is referred by Josephus Flavius,  who named the maritime city as the place where Herod's brother was captured (see reference). It was also referred by Plinius (23-79 AD) and appears in the Claudius Ptolemy World map (~150 AD).

Two milestones were found  south to Achziv, part of the Roman imperial coast road from Antioch to Acre- Ptolemais. Another limestone border stone tablet was found, written in Greek and dedicated to Galerius-Maximianus, Constantinus and Licinius I, dating it to 307-311AD.

The city was populated by Jews and the town was called Kziv, as the name of the creek. A synagogue existed in the place according to the Mishna (Tosefta, 7 2). They were farmers, wine makers, fishermen, sailors, and also prepared dye (Tyrian - purple color from snails). The city was regarded as the religious boundary of Israel, although other sources defined the Ga'aton (near Nahariyah) or Rosh Hanikra (as per Josephus) as this border.

During this period the city and the region have lost their importance. A coast guard was stationed here.

The region of Achziv once again flourished during the Crusaders period, as the city became an administrative center.

This period marked another retreat in the settlement in the region in general, which also affected the city. A village, El-Zeeb, existed on the hill during the Mamluke and Ottoman periods (12th to 20th century AD). Many of the houses reused ancient boulders in the foundations. The village lasted until 1948, when its population fled to Lebanon following the Independence war.

In 1946 the Israeli resistance blew up the railroad bridge over the creek. A monument exists north to the bridge dedicated to the memory of the 14 bold commandoes that died in the action, part of a nation wide attacks on bridges during the British Mandate (June 17). Kibbutz Gesher-Haziv (bridge of Achziv) is named after these heroes, as well as Kibbutz Yehi'am, named after their commander (Yechiam Weitz) who died in the action.

Achziv is a national park. Its green gardens are a background for brides and grooms that come for photo shots. The park is also a popular picnic place for families, and a summer beach.

South to the national park is  Club Med resort village, built in 1961. It was closed due to a shelling incident between 2002-2005, and reopened.

Another resort spot in the north side of Achziv is Avivi-Land, belonging to the colorful Eli Avivi, which he declared as an independent micro-state in 1970. The "state" was a popular beatnik beach in the 70s and 80s, making Achziv a famous landmark.

A drone captured this aerial view of the Tel, looking south. The national park covers most of the hill where the ruins of the ancient city of Achziv are buried. Ruins of the Arab village and its mosque are located closer to the shore, seen here in the center of the view. To the right is the public beach.  On the north (closer) side of the hill is the Avivi-Land resort. 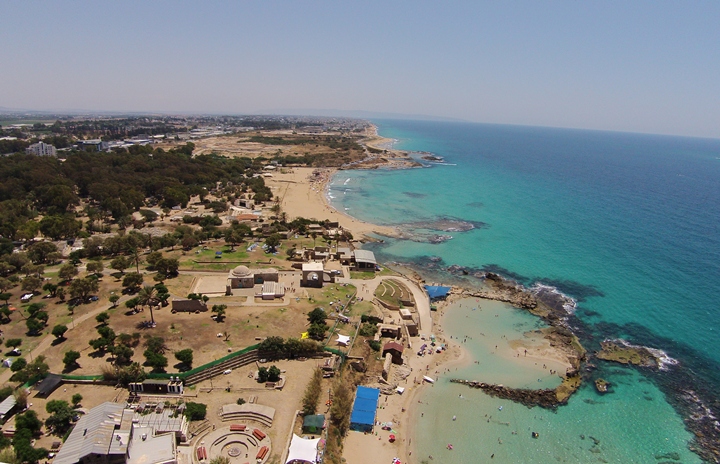 Another drone view, towards the north,  is in the next photo. On the bottom of the view is the outlet of Kziv creek. Traces of the ancient harbor can be seen under the water. In the far background, where the  "ladder of Tyre" ridge meets the sea, is Rosh Hanikra, at the border with Lebanon. 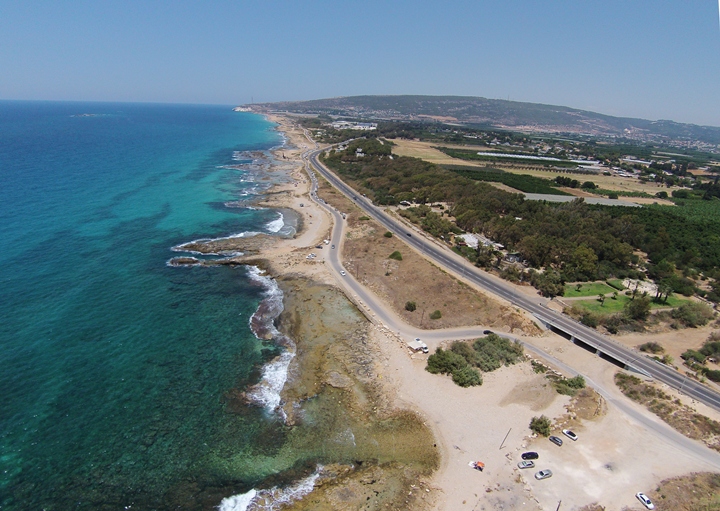 A flight over the site  can be seen in the following YouTube video, with indication of the major points of interest:

A view from the east towards the top of the steep hill, and the mosque in the center. The Tel is buried under the grass, and only parts of it were excavated. The coast is behind the hill. 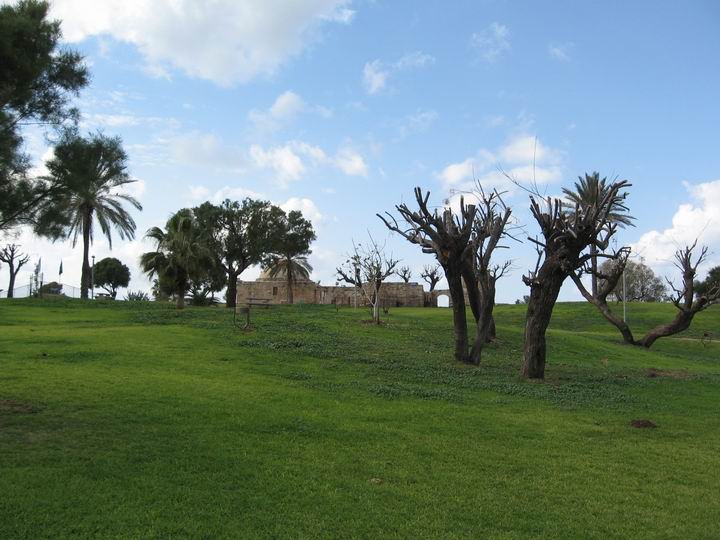 The mosque of al-Zeeb, the Arabic village which was once located on the hill. 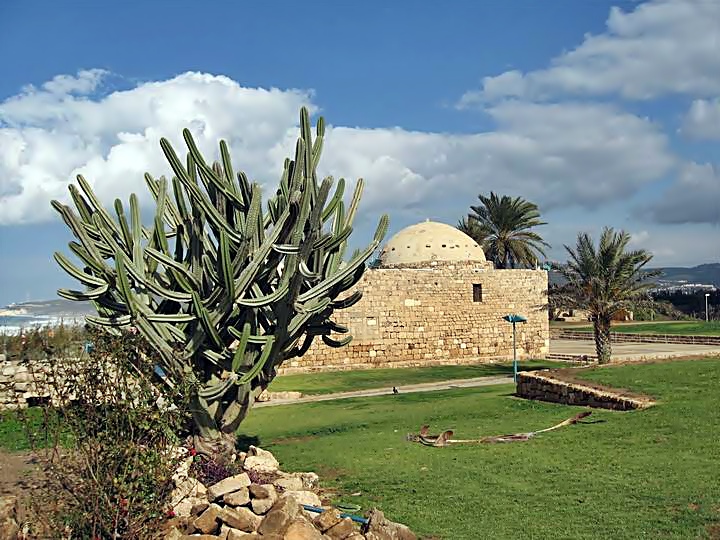 Another remains of a house from the Arabic town. 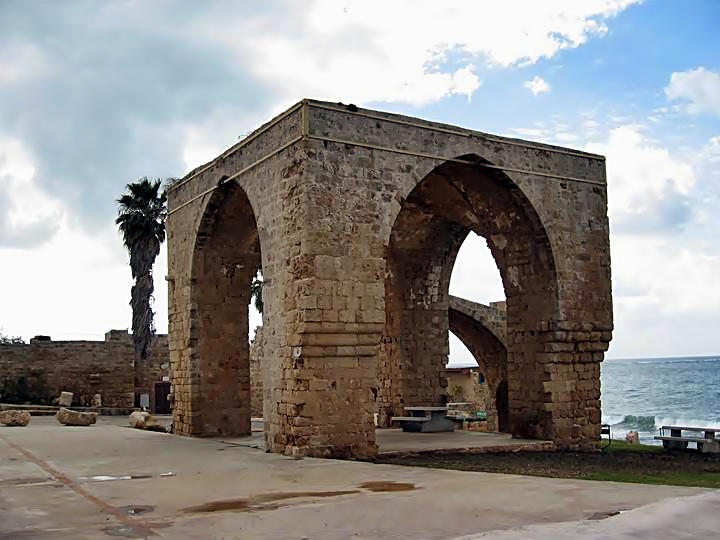 The oil press stone is relocated on the beach, as seen on the following photo. 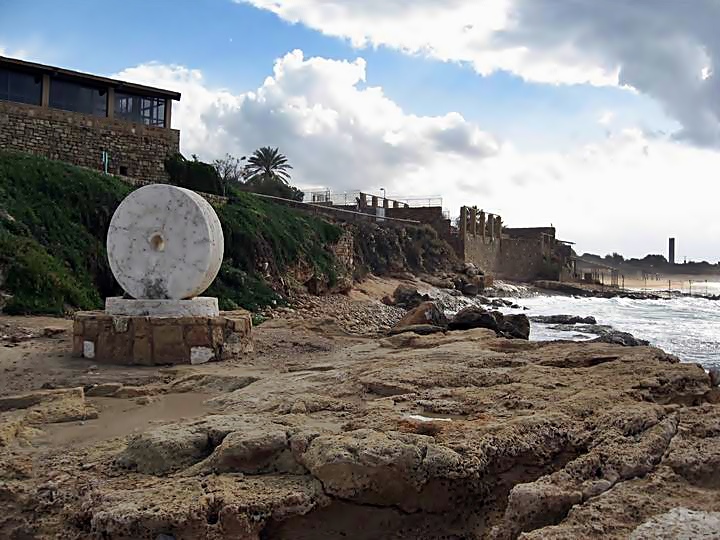 A view of fishermen on the ancient port stones, behind the oil press. 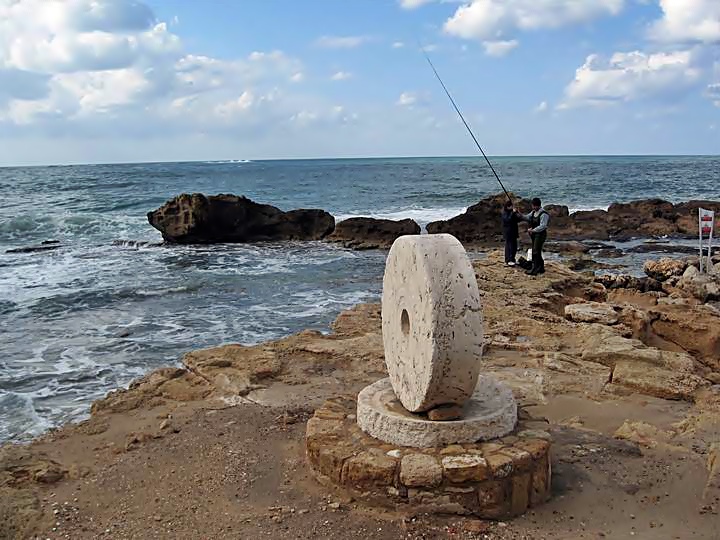 A view towards the north. Part of the Tel is seen on the right. In the background are the white cliffs of Rosh Hanikra - the border with Lebanon. 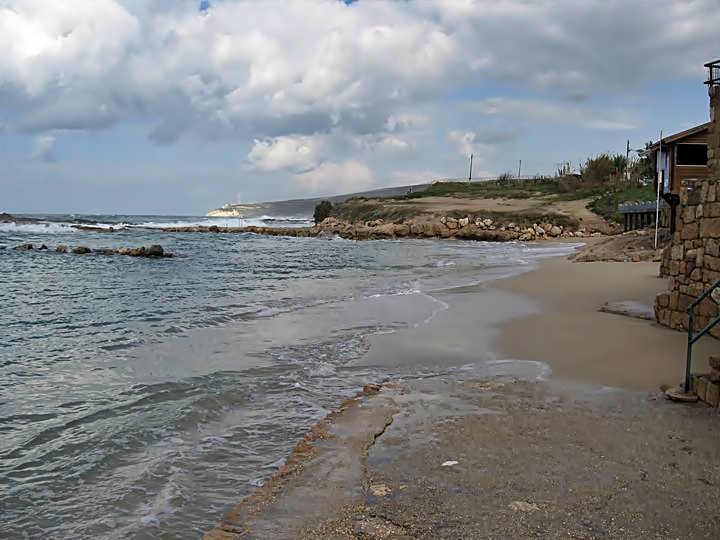 Some of the Arabic houses were left, as seen in the following photo. 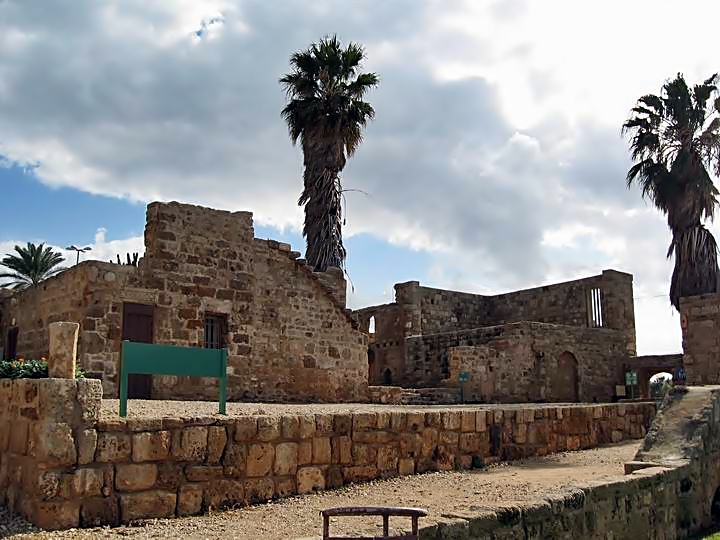 Another view of the house from the south. 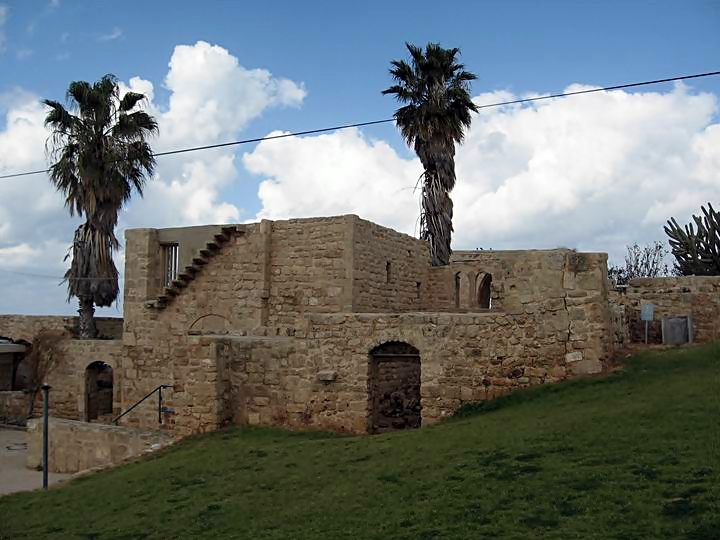 On the north side of Tel Achziv is the outlet of Kziv creek, as seen in the photo below. It is a popular place where people stop and walk around the beach. The north side is also the place of "Avivi-Land", seen here on  the far background where a tower is reaching out of the trees. 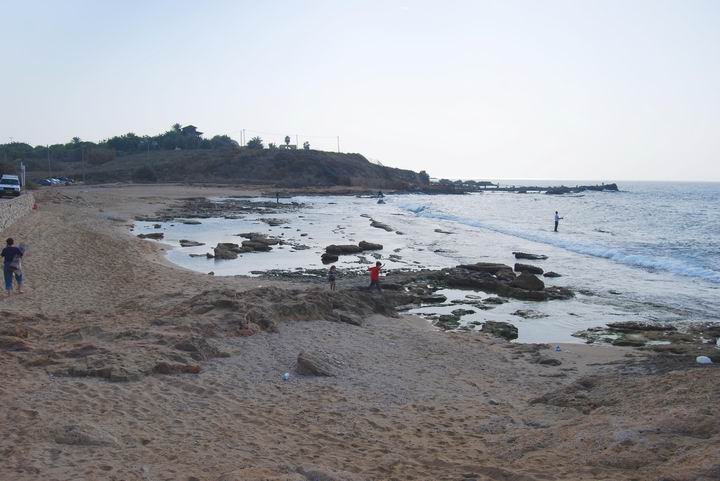 Five Large cemeteries are located 1KM east to the Tell (E-Ras), north, and 700M south to it (El-BukBuk). In the rock-hewn tombs were ceramics from the Iron and Persian periods, including several Phoenician tombstones.

This picture shows the eastern cemetery, located to the north of the entrance to Kibbutz Gesher HaZiv. 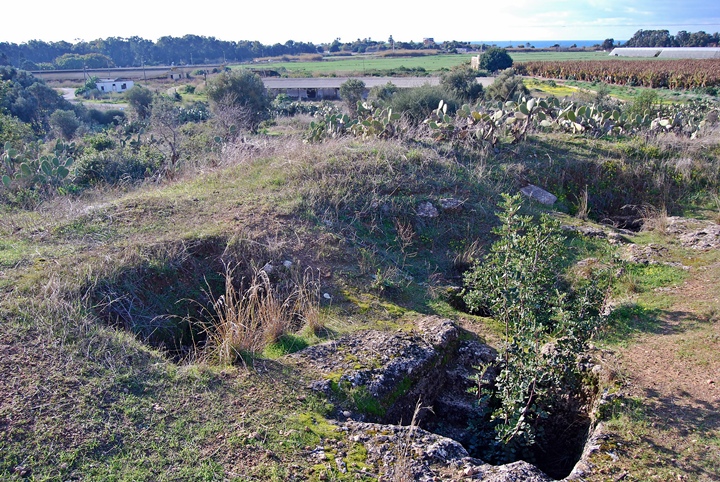 The burial types are hewn into the sandstone bedrock, and include shaft tombs, cist tombs, and burial chambers. 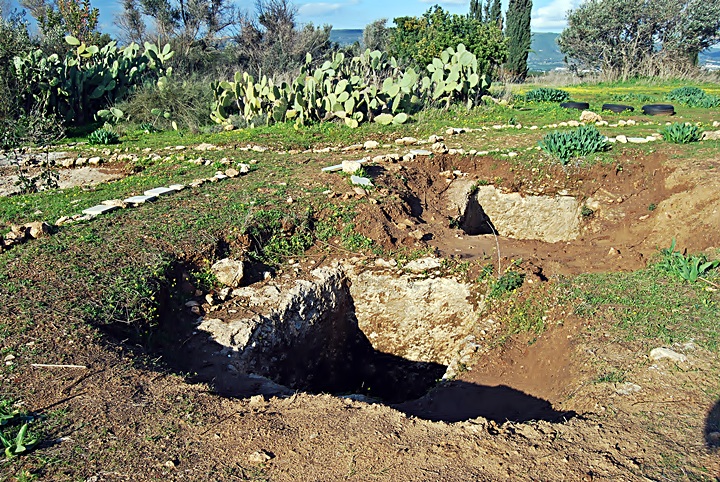 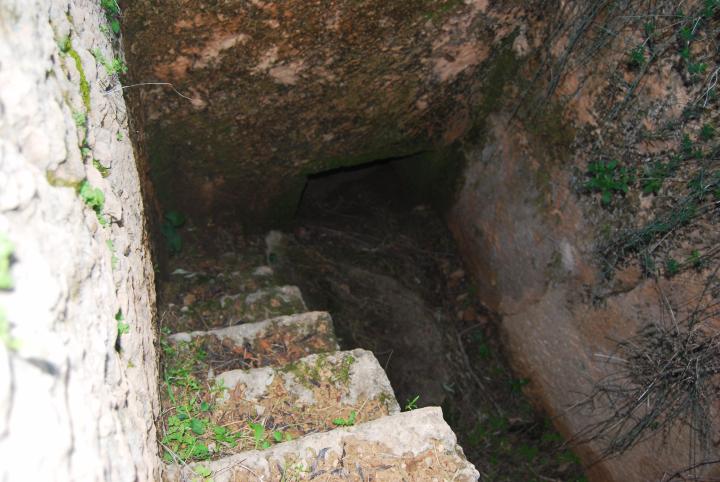 Clay vessels from the cemeteries of Achziv are on display in the Haifa University Hecht Museum. They are dated to the 11th thru 6th C BC. 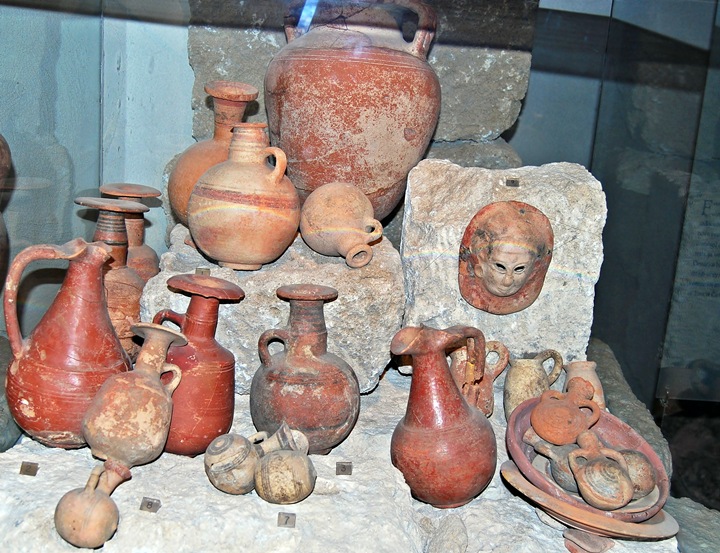 In the parking lot there are several impressive trees, including this 100 years old Sycamore Fichus. 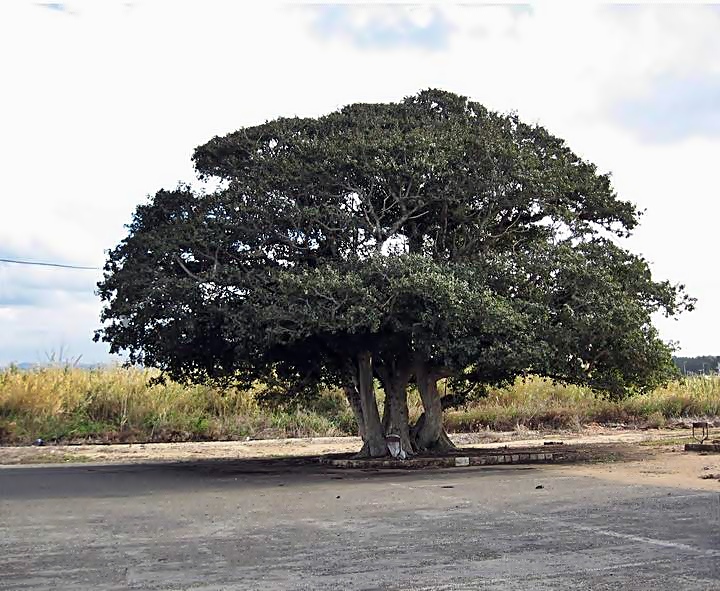 There are several old testament references to Achziv. Some of them refer to another city in Judea (like Joshua 15), which has the same name. The Galilee city is referred in the following texts:

This text describes the territory of the Asher tribe:

However, Asher tribe failed to drive out the population of Achziv:

" Now Hiram the king of Tyre had furnished Solomon with cedar-trees and cypress-trees, and with gold, according to all his desire--that then king Solomon gave Hiram twenty cities in the land of Galilee. And Hiram came out from Tyre to see the cities which Solomon had given him: and they pleased him not. And he said: 'What cities are these which thou hast given me, my brother?' And they were called the land of Cabul, unto this day".

The Jewish commander against the Romans, who later became a historian, wrote about Ecdippon (Roman Achziv), where in 40BC the brother of Herod (Phatsael, Phasaelus) and Horkenous II (from the Hasmoneans), were captured in the Parthian intrusion. Their fate was bad - the former committed suicide and the latter was maimed.

"But now, when they were come to Galilee, they found that the people of that country had revolted, and were in arms, who came very cunningly to their leader, and besought him to conceal his treacherous intentions by an obliging behavior to them; accordingly, he at first made them presents; and afterward, as they went away, laid ambushes for them; and when they were come to one of the maritime cities called Ecdippon, they perceived that a plot was laid for them; for they were there informed of the promise of a thousand talents, and how Antigonus had devoted the greatest number of the women that were there with them, among the five hundred, to the Parthians; they also perceived that an ambush was always laid for them by the barbarians in the night time; they had also been seized on before this, unless they had waited for the seizure of Herod first at Jerusalem, because if he were once informed of this treachery of theirs, he would take care of himself; nor was this a mere report, but they saw the guards already not far off them".

BibleWalks.com - walk with us through the Holy Land places