The burnt house was excavated in the Jewish quarter, and is believed to be destroyed, set on fire, by the Roman legions in 70AD.

Josephus Flavius, War VI 8 5: “… set fire to the houses whither the Jews were fled, and burnt every soul in them, and laid waste a great many of the rest;”

The burnt house was excavated in the Jewish quarter, and is believed to be destroyed, set on fire, by the Roman legions in 70AD. The reconstructed room, an audio-visual presentation and the displayed findings – serve as a time capsule of these tragic events.

History of the excavation:

When the Jewish quarter was rebuilt in the early 1970s, extensive archeological excavations were conducted in the area. The excavators, headed by Prof N. Avigad, found a Roman period house under a layer of ashes and destruction. They reconstructed a kitchen, ritual bath and work rooms. The house was part of a larger complex, belonging to the Kathros family of priests, that served in the Temple (located nearby – to the east of the house).

The excavators reconstructed four rooms, a kitchen, a yard and a small mikveh (ritual bath – baptismal). They also found a bone in the rubble – an arm of a young female – perhaps one of the house members who died at the hands of the Romans. Another interesting find is metal spear, which may have been used by the defenders against the Romans. Additional findings provided clues on the family’s daily life and occupation: stone jars, kitchenware, coins from the period of the great revolt, tools, stone weights (including the name of the family) and other artifacts.

The excavated house was opened to the public, and its artifacts are on display in the small museum near the room. The 12 minute audio-visual presentation, set up inside the Roman house,  plays back the nearly 2000 years old events as if they are happening in front of your eyes: the preparations of the revolt against the Romans, the different political opinions of the family members, news on the approaching Roman Legions, the destruction of the temple, the storming of the city and the house, then ending with the torching of the house.

The site is located at Tiferet-Yisrael street, in the Jewish quarter inside the old city. In the early Roman period, this area was the “Upper city”, located on the higher hill west to the temple. The close proximity to the temple made this area an ideal location for the wealthy priest families that once served in the temple.

The house is buried several meters under the modern street level of the Jewish quarter, since the Roman levels were buried by successive layers of construction.

The general view of the burnt house is seen in the photo below. The walls are made of stone, cement and white plaster. Inside the house are stone water jars, kitchen, ritual bath, ovens and work rooms. 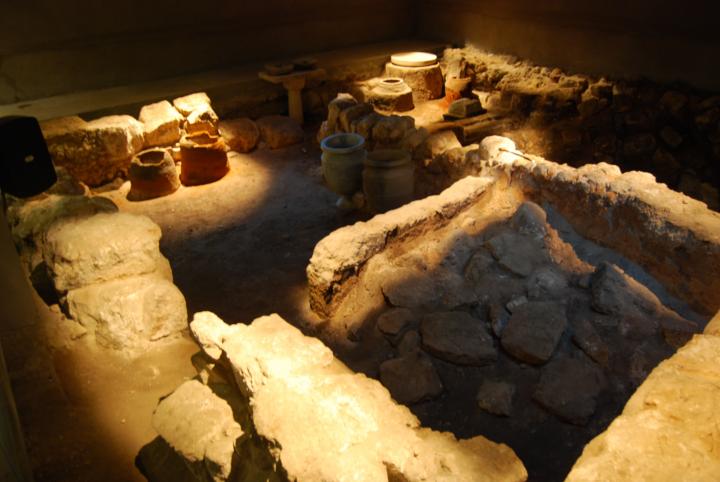 Several stone jars were found in the kitchen, seen in the upper side of the photo below. The use of the heavy stone jars, rather than the ceramics, was due to ritual requirements of washing and cooking. Additional sunken bases of ovens are seen, probably used in the workshop for preparing incense and other commercial items that were sold near the temple to the pilgrims. 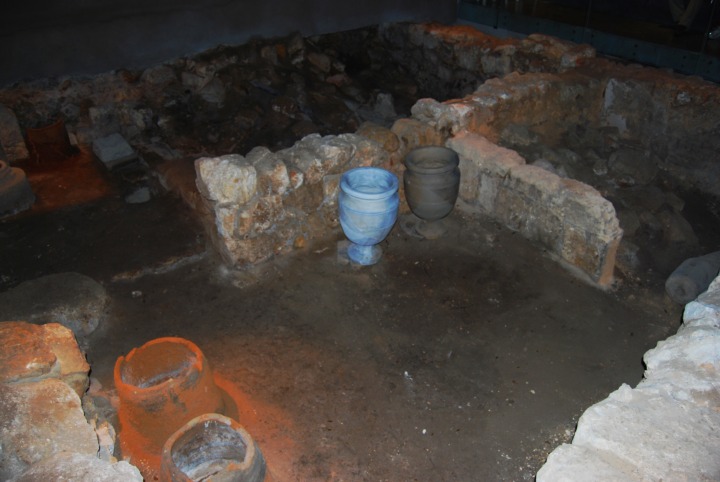 The photo below shows a covered drainage channel from the Roman period. 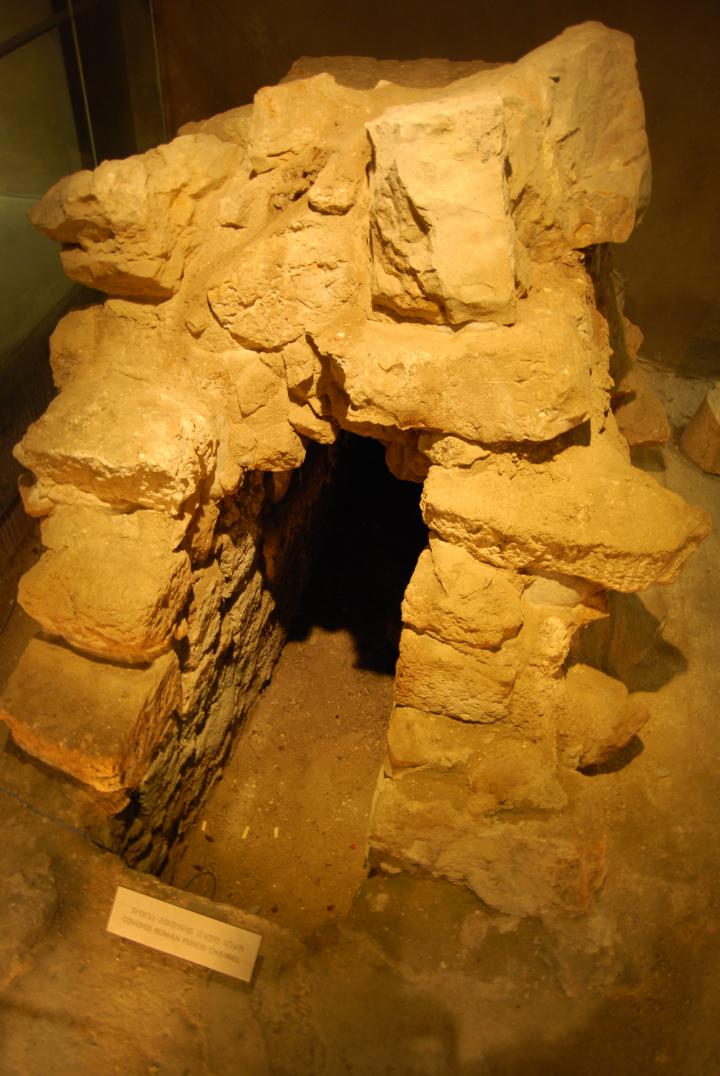 An iron spear was found in the rubble, probably used during the defense against the Romans. The bones of an arm of a young female were found during the excavations – not far away from the spear. She may have held the spear to defend herself against the Roman soldiers during the destruction of Jerusalem in Summer 70AD.

This is only a photo that is shown at the site, since the actual bone was buried. 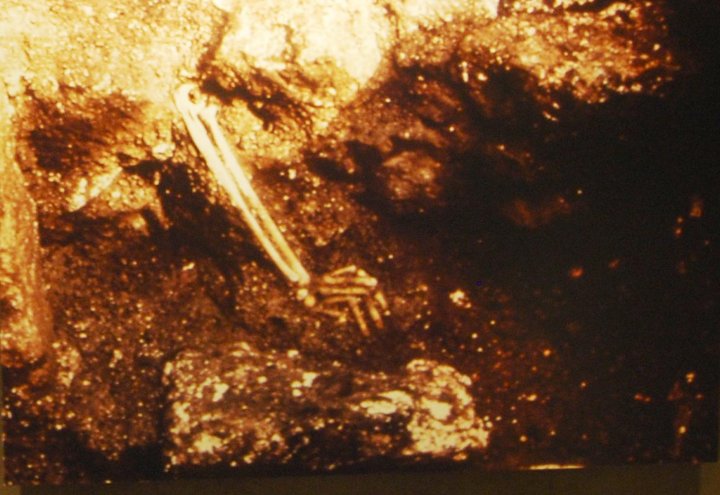 The small museum of the burnt house displays some of the excavated items. In the photo below – the Roman-period oil lamps that were used to light up the house during the evenings. 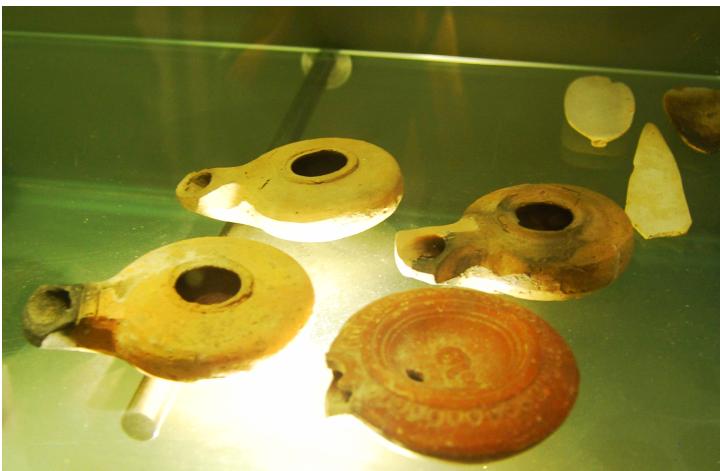 A display of the kitchenware (on the left side) and stone weights (right side). A stone weight was found, 10cm in diameter, which has a visible Aramaic/Hebrew inscription: “belonging to the son of Kathros”. This identified the name of the family, a famous wealthy family of priests who served in the temple. 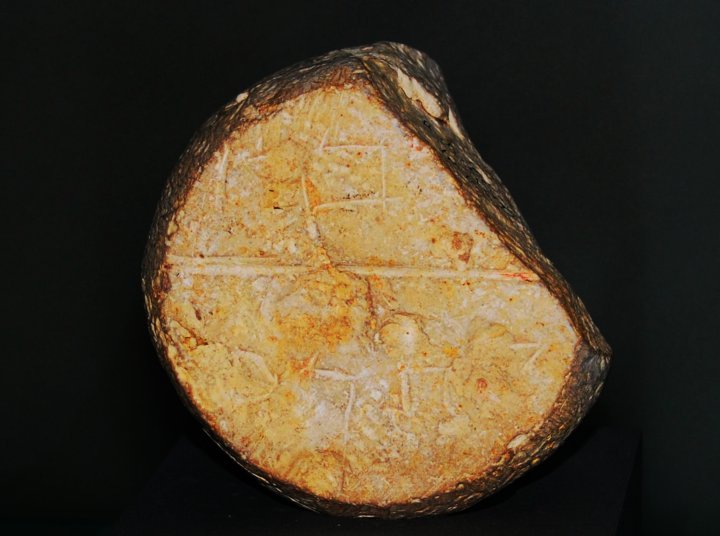 Josephus, in his classic writings almost 2000 years ago, describes the destruction of Jerusalem and the setting of the houses on fire, a month after the temple was set on fire-

“So they now left these towers of themselves, or rather they were ejected out of them by God himself, and fled immediately to that valley which was under Siloam, where they again recovered themselves out of the dread they were in for a while, and ran violently against that part of the Roman wall which lay on that side; but as their courage was too much depressed to make their attacks with sufficient force, and their power was now broken with fear and affliction, they were repulsed by the guards, and dispersing themselves at distances from each other, went down into the subterranean caverns.

So the Romans being now become masters of the walls, they both placed their ensigns upon the towers, and made joyful acclamations for the victory they had gained, as having found the end of this war much lighter than its beginning; for when they had gotten upon the last wall, without any bloodshed, they could hardly believe what they found to be true; but seeing nobody to oppose them, they stood in doubt what such an unusual solitude could mean. But when they went in numbers into the lanes of the city with their swords drawn, they slew those whom they overtook without and set fire to the houses whither the Jews were fled, and burnt every soul in them, and laid waste a great many of the rest; and when they were come to the houses to plunder them, they found in them entire families of dead men, and the upper rooms full of dead corpses, that is, of such as died by the famine; they then stood in a horror at this sight, and went out without touching any thing. But although they had this commiseration for such as were destroyed in that manner, yet had they not the same for those that were still alive, but they ran every one through whom they met with, and obstructed the very lanes with their dead bodies, and made the whole city run down with blood, to such a degree indeed that the fire of many of the houses was quenched with these men’s blood.

And truly so it happened, that though the slayers left off at the evening, yet did the fire greatly prevail in the night; and as all was burning, came that eighth day of the month Gorpieus [Elul] upon Jerusalem, a city that had been liable to so many miseries during this siege, that, had it always enjoyed as much happiness from its first foundation, it would certainly have been the envy of the world. Nor did it on any other account so much deserve these sore misfortunes, as by producing such a generation of men as were the occasions of this its overthrow”. 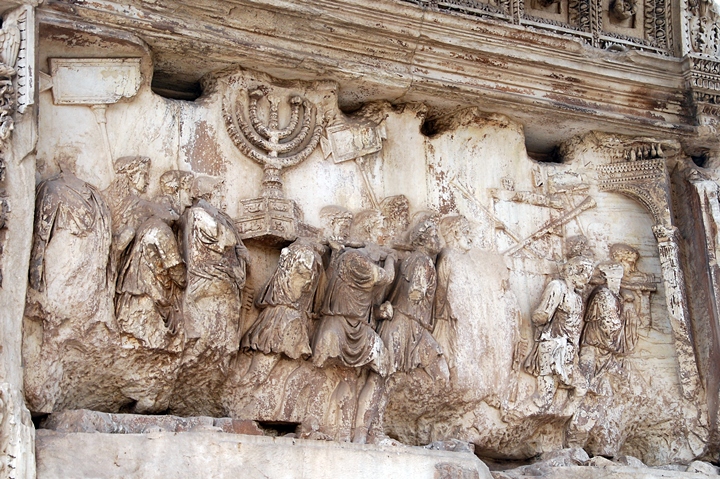 Titus Arch, Rome – the victory procession, with the booty taken from Jerusalem, including the seven branched candlestick

The Talmud is a 5th century AD books of religious practices, an extension and interpretation of the earlier texts of the Mishna (which compiled the oral traditions in about 200AD). The extension is called Gemara.

In the following text is a poem that lists some priestly families that abused their positions in the temple, including the Kathroses. Apparently, this family was disliked because of their writings and perhaps other deeds. They also got rich from commercial activities at the temple, which drew criticism to a level that they appear in a black list of families.