A cluster of tombs built into the rock on the foothills of Mount of Olives, resting place of the Cohen family of Bnei-Hezir. 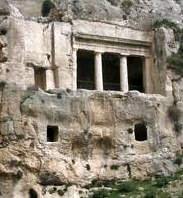 A cluster of tombs built into the rock on the foothills of Mount of Olives, the resting place of the Cohen family of Bnei-Hezir. This cluster is adjacent to the tomb of Zechariahin the Kidron valley, and facing the temple mount. It is cut into the rock and made entirely from the rock.

The tombs are built on the lower western foothills of  Mount of Olives, facing the old city of Jerusalem, on the eastern side of Kidron valley.  This entire area is a large cemetery with thousands of tombs. It is located between the tombs Absalom and Zecharia.

The tomb is dated to the beginning of the 1st century BC, during the Hasmonean period.  In the entrance to the tomb is an inscription which lists members of the Hezir Cohen family as those buried in the tomb. This inscription, written in ancient Hebrew letters, was found in 1865.

According to the Jewish tradition it is said to be the place where King Azariah lived there in the 8th C BC after becoming a leper. Thus it is called Beit-Hahofshit (as per 2 Kings) , which means in Hebrew “the free place” since the King was free of the burden of being a King. 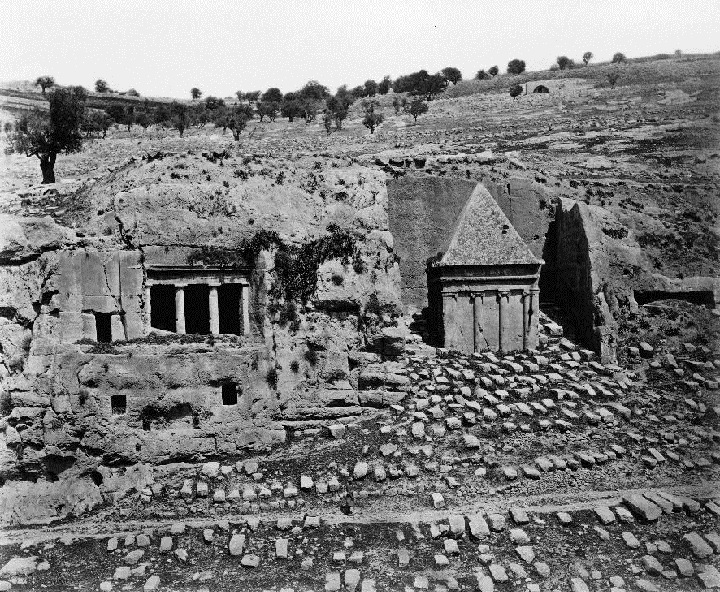 According to a Christian tradition, this is the site where Jesus appeared to Saint James, his brother, after the resurrection (as per 1 Corinthians). (Correction by C. Singerman). According to a tradition, James was buried here (62 AD).

This monumental tomb is typical of Jewish Second Temple tombs. The facade of the tomb is a classical design called “dystillos-in-antis”, meaning: two pillars between two pilasters. Above is an engraved inscription. Inside is a corridor that leads to a cluster of 3 halls and additional rooms. There are also steps that connect to the tomb of Zechariah. 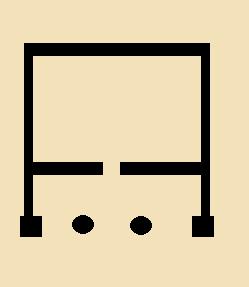 A view of the area of the  tomb, in the bottom of the large Jewish cemetery on the lower foothills of Mount of Olives. On the right side is the Tomb of Zechariah, and to its left is the cluster of tombs known as the tombs of Bnei-Hezir. On the bottom of the tombs is the Kidron valley. 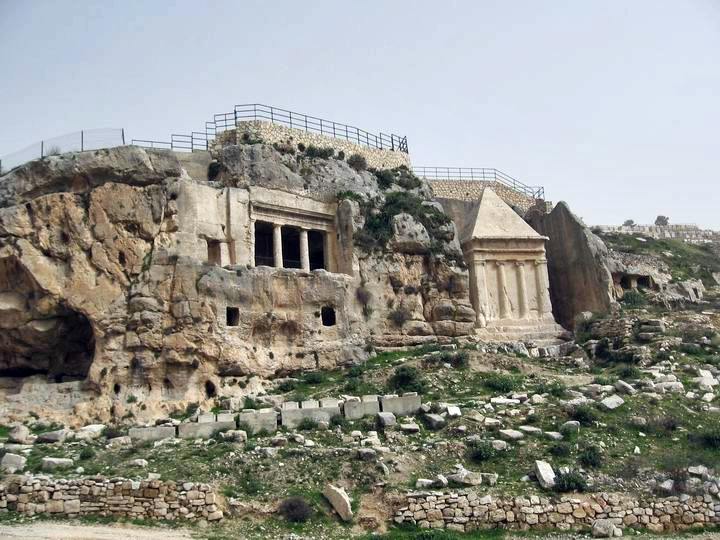 This is a close up of the tomb cluster. 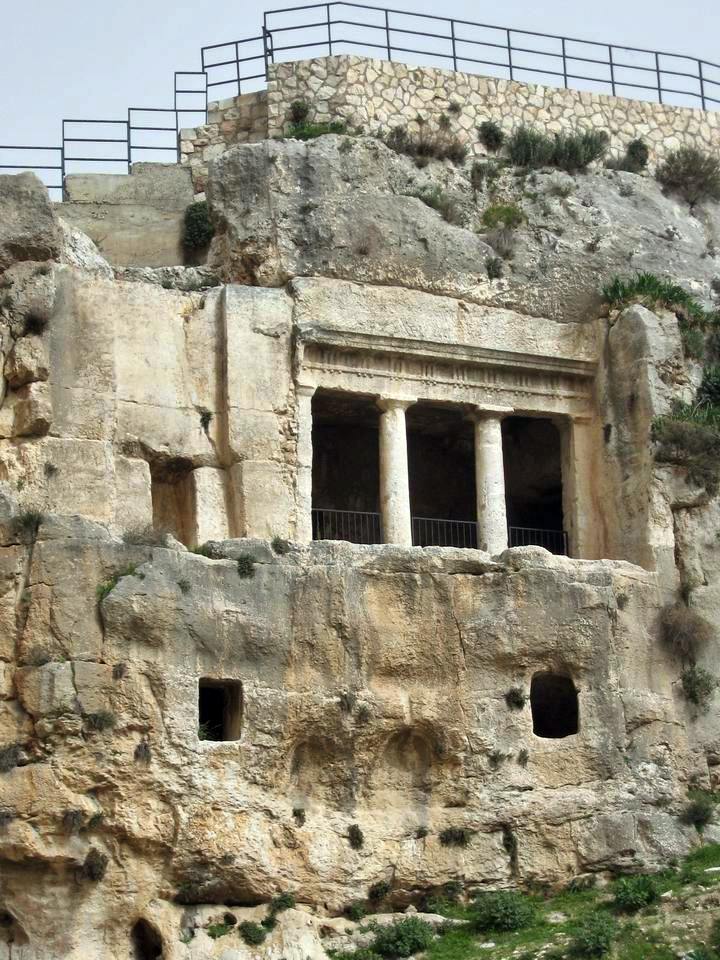 In June 2010, as part of the Jerusalem Light Festival, the tombs were illuminated with special effects. Here are some of the amazing views, with Bnei Hezir tombs on the left and Zecharia tomb on the right: 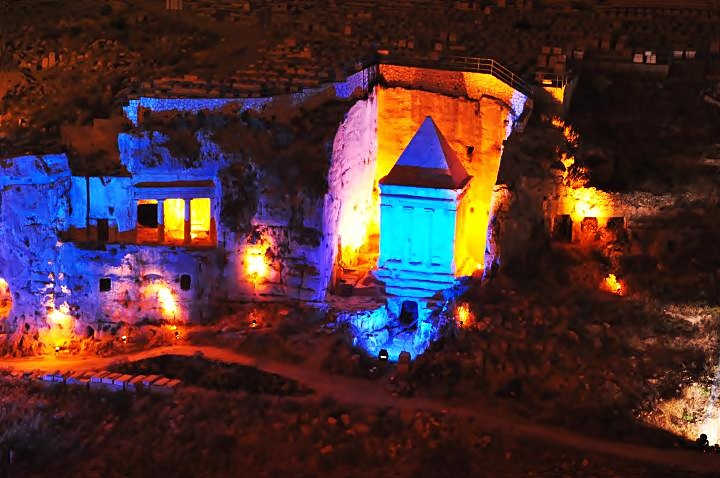 With the cemetery of Mt Olives bathed in a golden light: 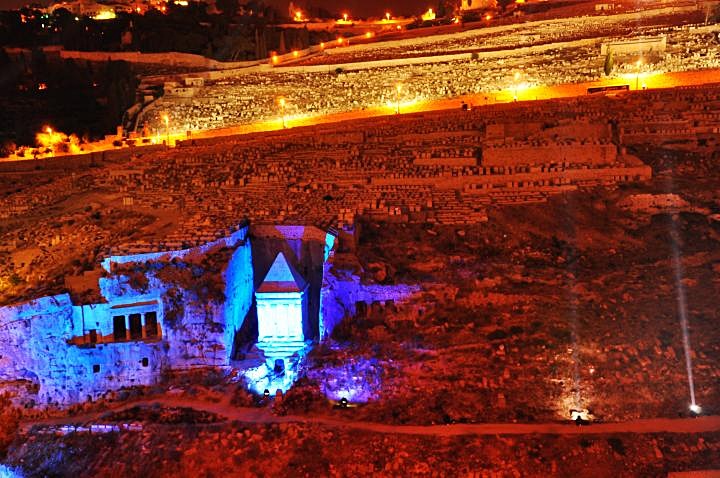 This text lists the 24 Cohen families who served the temple and later where spread throughout Israel:

“The seventeenth to Hezir, the eighteenth to Aphses,…,These were the orderings of them in their service to come into the house of the LORD, according to their manner, under Aaron their father, as the LORD God of Israel had commanded him”.

Nehemiah was a servant in the court of the Persian King Artaxerxes. At about 445BC he visited the returnees in Israel to find out on their situation in the Holy Land. After several months he was asked by the King to remain in Jerusalem. He then helped the population and improved their economic and social situation.

This text lists those who signed the “contract” arranged by Nehemiah between the people and God, including the Hezir clan.

“And because of all this we make a sure covenant, and write it; and our princes, Levites, and priests, seal unto it….Magpiash, Meshullam, Hezir,”

King Azariah became a leper. According to tradition he lived in the Bnei-Hezir tomb cluster, which the Bible calls “several house” but in Hebrew it reads “Beit-Hahofshit” (house of the free, or separated). His son was the acting King during his illness until he died.

“In the twenty and seventh year of Jeroboam king of Israel began Azariah son of Amaziah king of Judah to reign. Sixteen years old was he when he began to reign, and he reigned two and fifty years in Jerusalem. And his mother’s name was Jecholiah of Jerusalem. And he did that which was right in the sight of the LORD, according to all that his father Amaziah had done; Save that the high places were not removed: the people sacrificed and burnt incense still on the high places. And the LORD smote the king, so that he was a leper unto the day of his death, and dwelt in a several house. And Jotham the king’s son was over the house, judging the people of the land. And the rest of the acts of Azariah, and all that he did, are they not written in the book of the chronicles of the kings of Judah?”

James was one of the apostles. He is believed to have hidden in the Bnei-Hezir tomb from the Romans, then Jesus appeared to him after resurrection.

“After that, he was seen of James; then of all the apostles”.

Later, according to tradition, he was buried here (62AD).

This page was last updated on July 2, 2021 (correction on James)