Ruins of a Roman/Byzantine village on the western edge of Kziv creek.  A short second stage of settlement was in the Crusader/Ottoman period. Across the creek is a Biblical site. 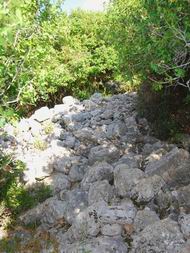 Khirbet Beit-Uriya (the house of the Lion) are the remains of a Roman/Byzantine village located on the west end of the Kziv creek in the upper Galilee.  The site existed in the 1st-4th century AD (Roman period) and in the 13th-14th century (Crusader/Ottoman period).

In the site are traces of buildings, agriculture installations (winepress and olive press) and traces of a wall around the site.

Across the south creek is a Biblical site from the times of the Israelites (Iron age).

The site is located near the nature road from modern Manot to Miztpe Hilla. The road crosses the site on its south side, and so it is very easy to access the site.

The size of the site is very small, about 3 dunams. It is located on a ridge overlooking the Kziv creek on its south side, at at a height of 266M.

An aerial photo of Khirbet Beit Uriyah (Uriya)  and the area around it is shown below, indicating the major points of interest. The site is located on a ridge, with Kziv creek on the north side and Sha’al creek on its south side. 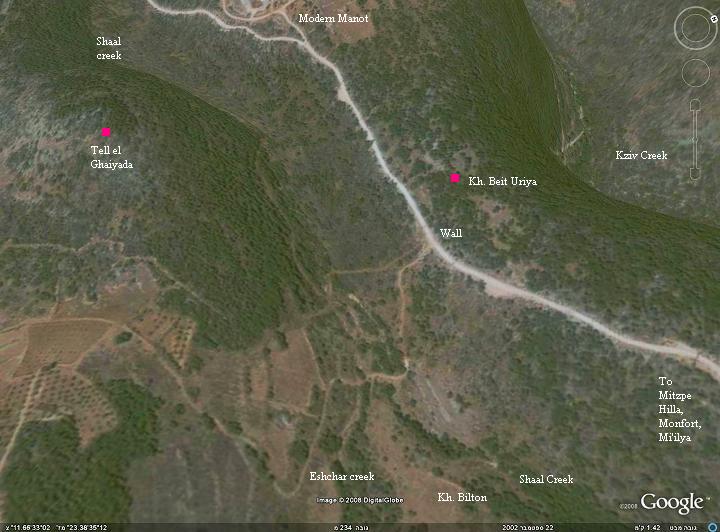 Along the Kziv creek, about 1KM east, are many findings starting from from the Neolithic period (83 century BC- 45 century BC).

Across the small Nahal Sha’al creek, about 400M south-west, is an Iron age I site (1200-1000BC) called Tell el Ghaiyada or Tell Riada. This small unidentified Biblical site  is located on a rocky summit on top of the ridge between two creeks, at a height of 291M. This city might have been an  Asher tribe village, one of the “suburbs of Avdon“. The sites from the Israelite conquest period were, in general for the Upper Galilee and specifically for this site, mostly located on hills.

A small presence continued into the Iron age II (the Israel Kings period, 1000- 586BC), and was never occupied after this period.

During the Hellenistic and Roman periods, most of the Tells in the Holy Land were abandoned to nearby larger sites. This also happened in this site, where the Biblical site was relocated to Beit-Uriya.

The village was established at the Roman period, and existed from the 1st to the 4th century AD.  This was a small agriculture village is located on a high point of south side of Kziv, with about 20 residential houses, and installations such as an oil press and a wine press.

In the 13th/14th century the site was resettled again for a short time, then left in ruins once again. This was the second and last stage of settlement in the site. According to various Crusaders documents, the site might have been called Aithire and/or el-Butrieh.

The site is in ruins today, mostly covered by thick bush.

A new settlement, Moshav Manot, established in 1980, is located nearby.

This is a view of the site from the road side, on its south side. The ancient village is in total ruins. Only few of its walls are standing at a height of several layers, and most of the walls have completely leveled. The heavy bush covers most of the site. 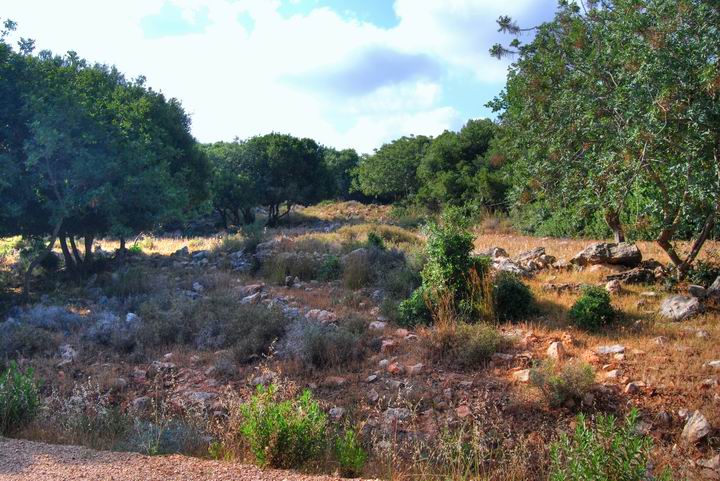 Close to the road are sections of a wall. The wall stretched along the west and south side of the entire site, and might have completely surrounded the village at its first (Roman) stage. 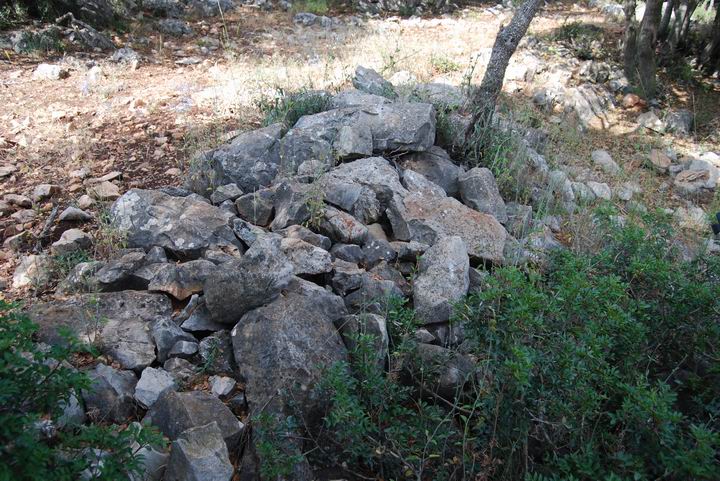 Inside the area of the site are piles of stones which were part of the walls of the houses. 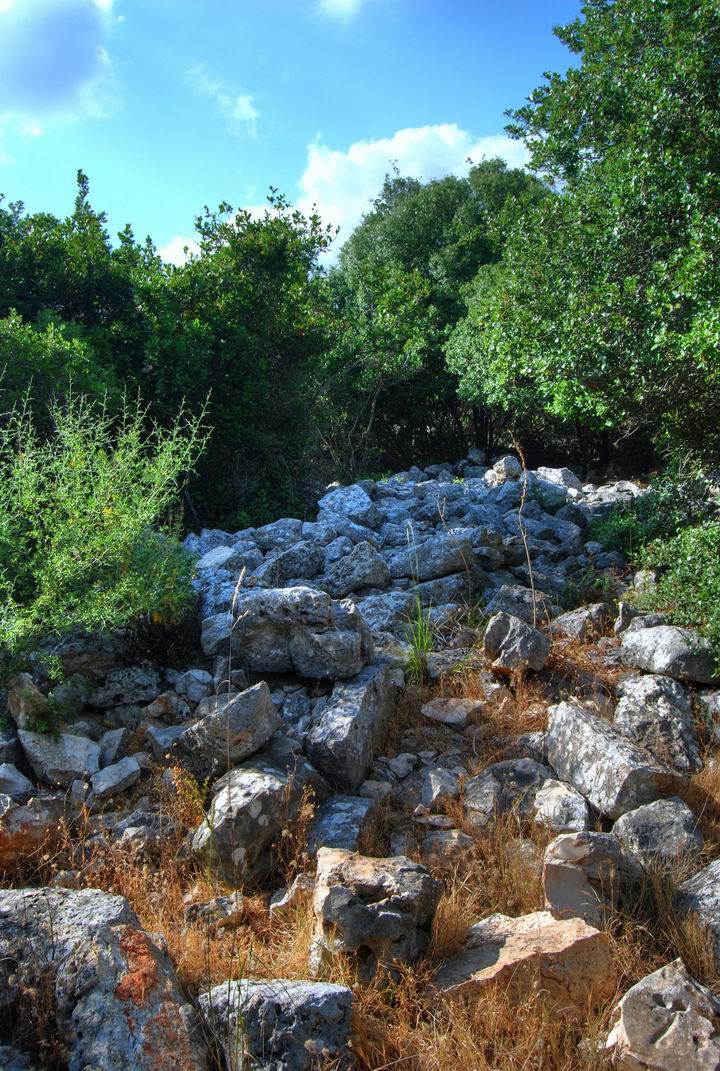 The photo below shows other sections of walls of the houses in the site. Most of the site is covered with a heavy bush. 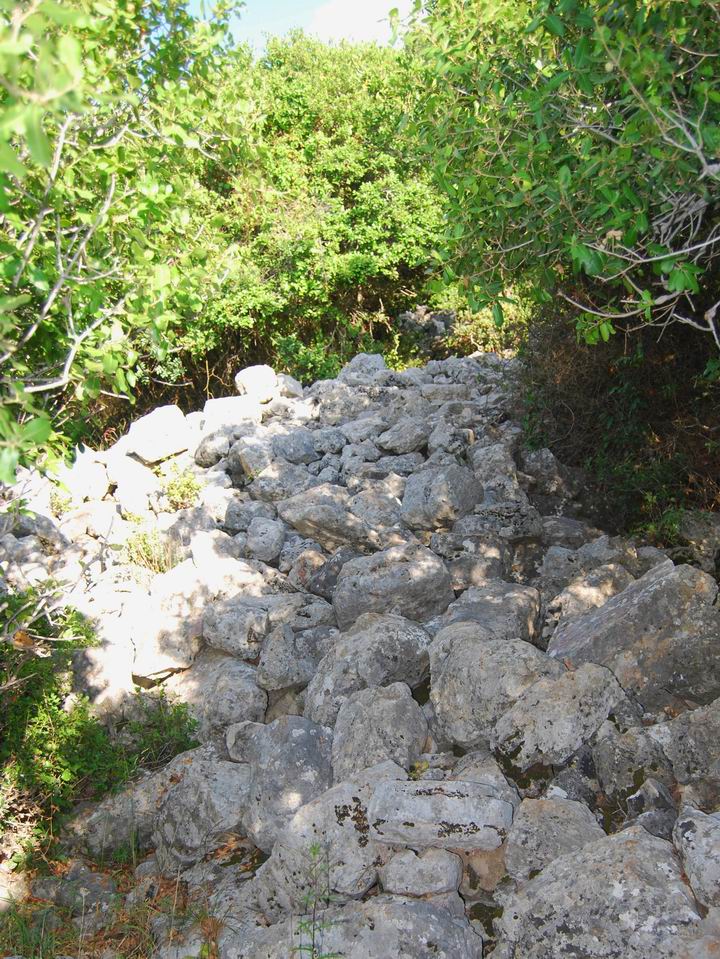 A section of a wall is seen in the photo below. This section belongs to a structure of the second (Ottoman) stage. 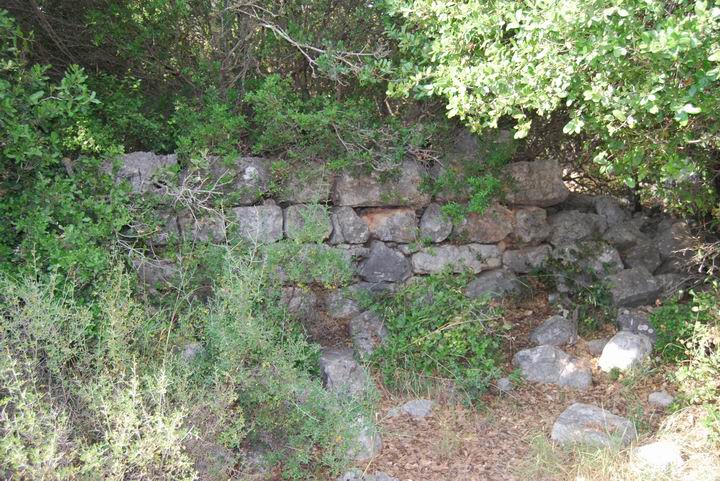 On the soil before this wall is a thick layer of ceramics and glass. These findings are from the Roman and Crusader-Ottoman periods. 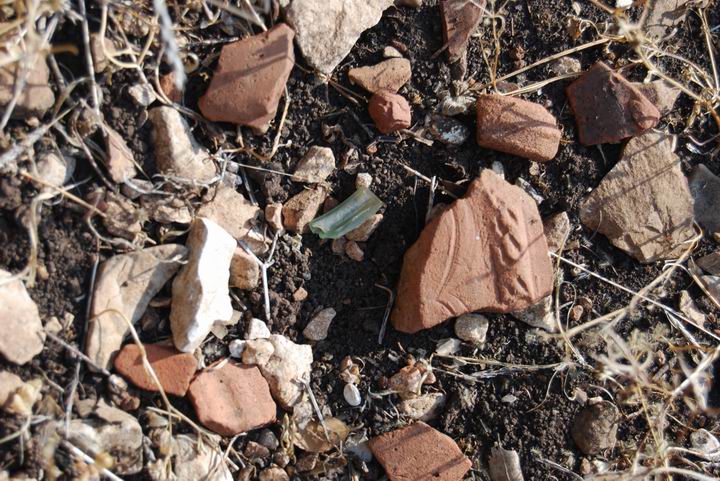 On the north-western side of the site, below the houses, are remains of an oil press. Some of its other parts were robbed in the past.  A wine press is also located in the site. 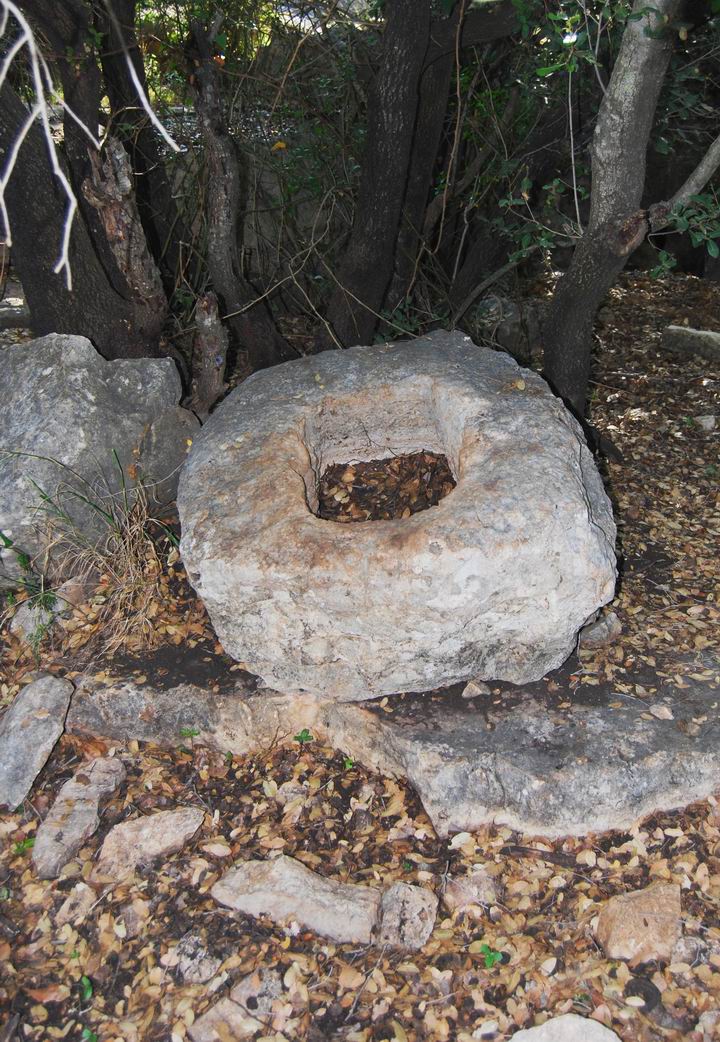 Near the oil press is a deep natural hole between the rocks. It was probably in use for storage. Not far away, north-west to this hole,  is a cave with two cavities (5X4M, 7X4M) which was in use in the Crusader/Ottoman period. 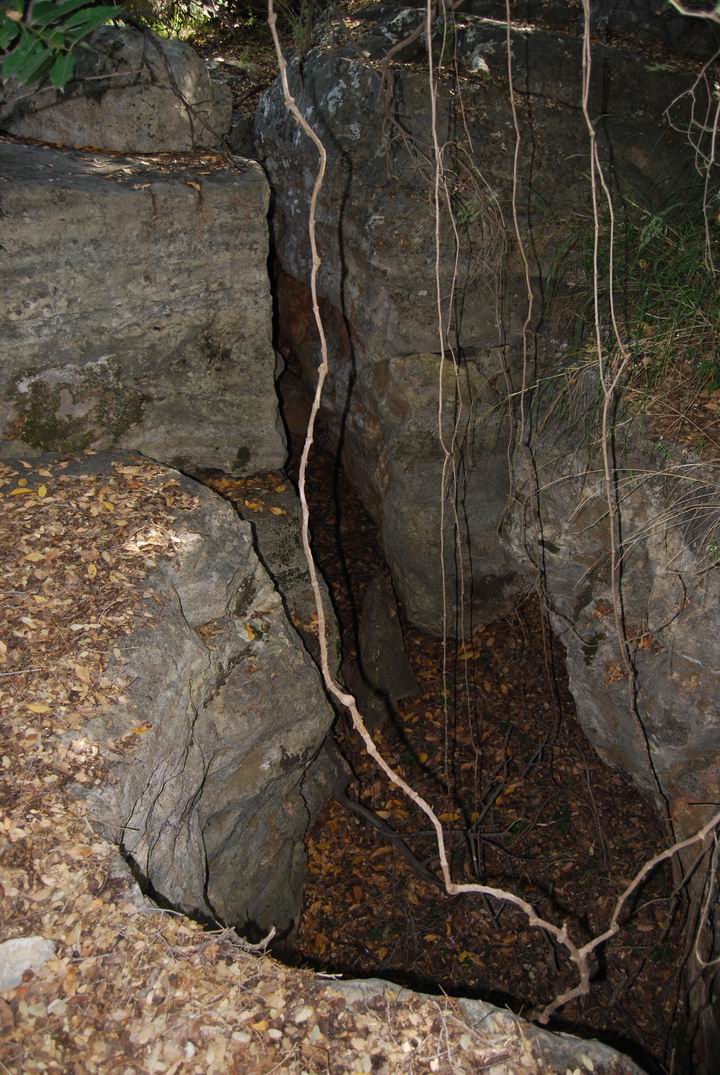 Across the creek is a round hill (height point 291M), which is covered by the bush. This site is called (Arabic): Tell el Ghaiyada. According to Archaeological survey most of the ceramics are dated to the Iron Age I (1200-1000BC – the times from the Judges to King Saul)  and some are from Iron age II (1000-586BC – the time from King David until the exile to Babylon). 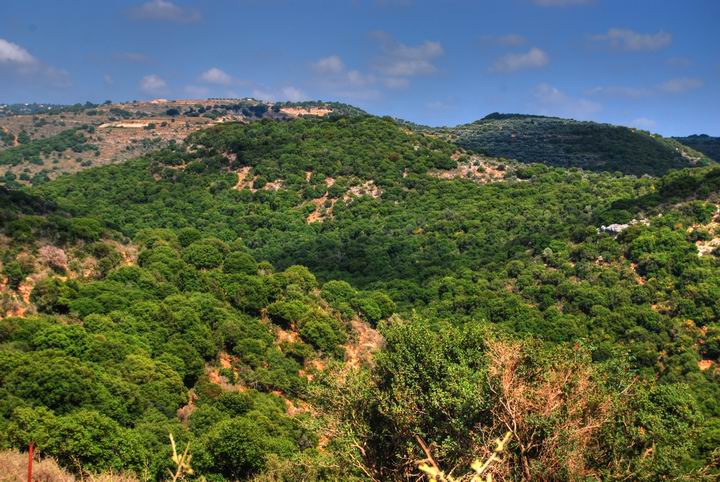 A panoramic view of the tel is seen in the photo below, as seen from the north west side (click on it to view in full resolution). On the far left side is the round hill (where the Iron age site is located), while on the closer right side is another hill with an Ottoman structure.

The photo below shows the eastern side of Khirbet Beit Uriya. On the left hill is Khirbet Bilton, another ancient village in the area. 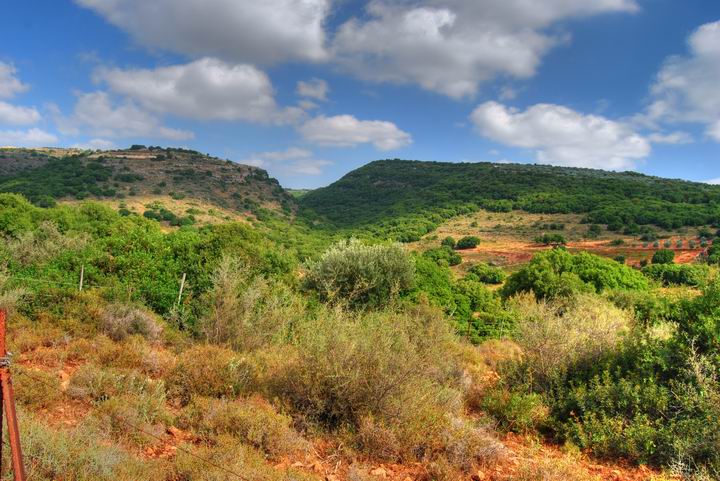 The road from Beit Uriya descends down to the crossing of two creeks – Sha’al and Eschar, at the green center of the photo below. This is also the road to the ancient Tell on the right side of the photo. As you can see, it is a great hike through the nature reserve of the west upper Galilee. 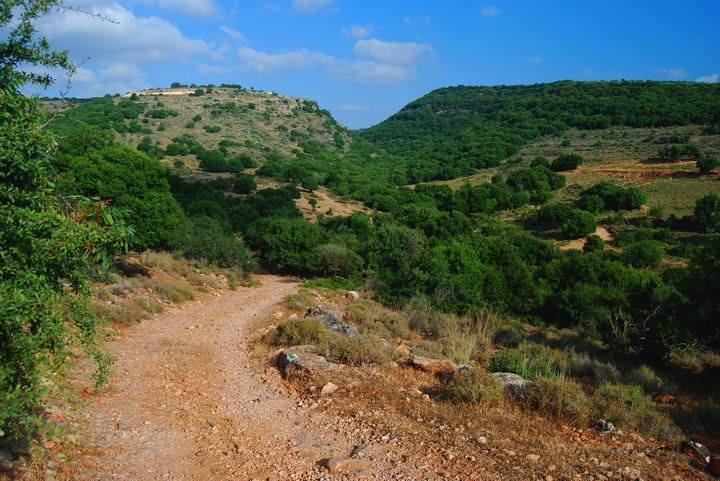 During the spring time there is a variety of wild flowers in the site. However, in May most of the flowers are gone, so we captured a close up of the thorn. The thorn,  seen below,  is common in the Galilee and dry areas.

It was identified by our flowers expert Uncle Ronnie: The type is called “Eryngium creticum”, and in Hebrew: Charchevina -Makchila. The Hebrew name is based on the fact the plant grows in dry weather – the root name is H-R-V which means dry – and the second word  means “turning blue”.  Although its weird name, the Charchevina is actually listed in the Mishna, the 2nd century AD books of Jewish practices, as one of the plants that are allowed as Passover bitter herbs (Passachim 2: 6). 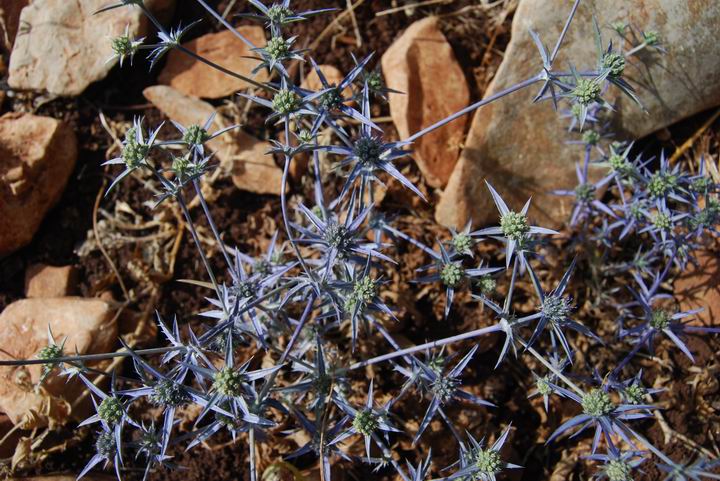 The Biblical Tell near Beit Uriya was probably one of the “suburbs” of Avdon, which is located 3KM to the west. These are Biblical references for the suburbs, villages that probably supplied goods to the main city.

“And the children of Israel gave unto the Levites out of their inheritance, at the commandment of the LORD, these cities and their suburbs…. And out of the tribe of Asher, Mishal with her suburbs, Abdon with her suburbs”