A Druze village in the center upper Galilee, the highest village in Israel. Founded in the 13th century, and may be identified as the Biblical “Beth-Dagon” of the Galilee.

Joshua 19, 24-27: “And the fifth lot came out for the tribe of the children of Asher according to their families. And their border was… And turneth toward the sunrising to Bethdagon…”

Beit Jan is a Druze village in the center upper Galilee. It is the highest village in Israel, spread over several hills at about 1000M above sea level. It was founded in the 13th century AD.

The site can be identified as the Biblical “Beth-Dagon” of the Galilee, which was listed in the region of the Tribe of Asher.

The village of Beit Jan  is  located south to the peak of Meron (Meiron), the tallest mountain. The village is surrounded by several high hills (Ha’Ari-1048M, Safrir-1060M). 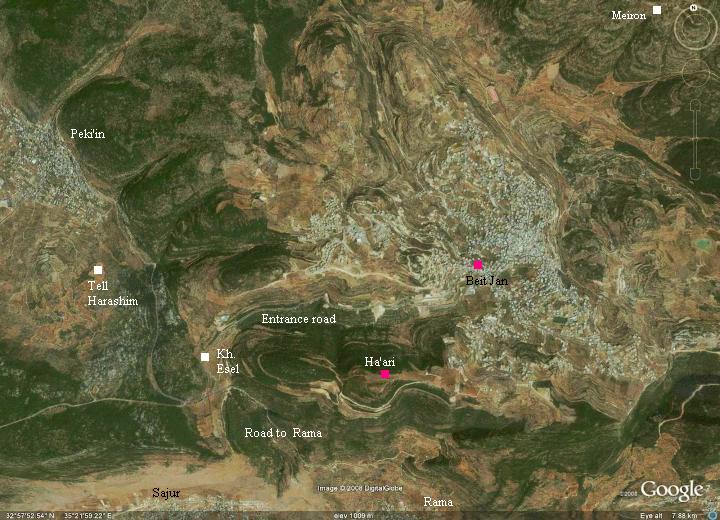 The high mountainous area around Meron was inhabited starting in the Iron age, at the time of the Israelite settlement. The difficult terrain and weather limited the growth of the area. During the Iron/Israelite  age there were several sites around Beit Jan (Khirbet Hamama, Hurvat Shefanim). A fortress from the Israelite Kings period (10th-7th century) was discovered north to Beit Jan, on Mount Meron. Another site was excavated near the village of Peki’in, west of Beit Jan (Tell Harashim, which had 5 levels starting from the Mid-Bronze age, ending in the Persian/Hellenistic period, and fortified during the Israelite period).

The site be identified as the Biblical “Beth-Dagon” of the Galilee, which was listed in the region of the Tribe of Asher. This identification relies, among other considerations,  on the similarity of the Biblical name to the modern name. The Biblical site may have been located inside the village of Beit Jan or in one of the Iron age sites near it. This was the border with the tribe of Naftali, which some of its villages are located in the plains below, such as Rama (the Biblical Ramah).

The site probably was destroyed (734-732 BC) in the intrusion of Tiglath-Pileser III (Kings II 15: 29). This intrusion wiped out most of the Galilean sites, as written in the Bible.

After the destruction, the area was inhabited again during the Hellenistic/Roman period. Several villages were founded in the area, but destroyed  in the 7th century AD.

The Druze faith, an offshoot of the Ismaili sect of Islam, can be traced back to the times of Al-Hakim bi-Amr Allah, the 6th Fatimid Caliph in Egypt (996-1021 AD).

Al-Hakim, an eccentric ruler of the Fatimid empire,  was proclaimed as a prophet (1017) by his follower, Muhammad bin Ismail Nashtakin ad-Darazi. Darazi who later (1018) executed by the orders of Al-Hakim.

Caliph Al-Hakim himself disappeared (assassinated?) in 1021. However, the new faith continued through other followers, such as Hamza ibn ‘Ali ibn Ahmad, the first leader of the new faith.

Hamza and other members of the new faith were forced to hide in exile in the remote mountains of Lebanon, where the faith grew over the years, spreading to Syria and Israel.

The Druze, named after Darazi, became fierce warriors who fought against the Crusaders.

During the 13th century Druze villagers from the Shuf mountains of Lebanon founded three villages in the area: Beit Jan, Zavud and Jermak. The last two were deserted during the 18th century (Ottoman period).

Beit Jan is a large Druze village which is constantly expanding to the mountains around the congested center of the town.   The maze like town is difficult to navigate (you would get lost inside even if you leave bread-crumbs behind… ).

The town offers good Druze food and some rooms to let (Zimmer). The climate is cold year round, with snow in the winter. The high mountainous area, with panoramic views of the whole north of Israel, make it a recommended place to visit.

A night view of the center of the village of Beit Jan is seen below. The village is spread over several hills around the center. In the background of the village is the highest mountain in Israel (excluding the Golan heights) – Mount Meron (Meiron, 1208M above sea level). 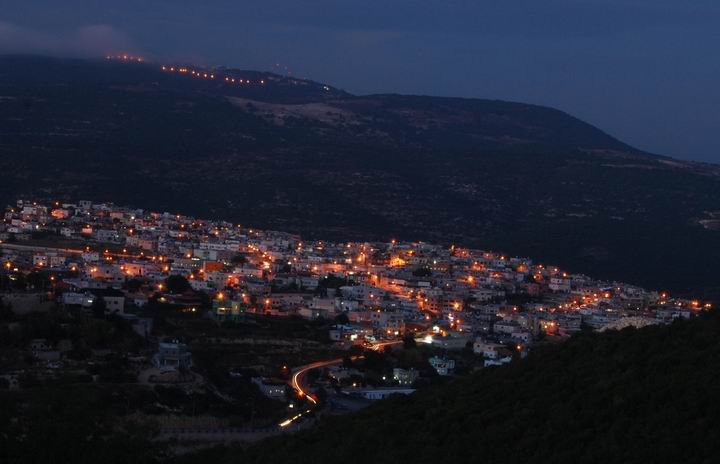 The high mountain Ha’Ari (1048M) is located on the south side of the village. The mountain means “The Lion” in Hebrew, and is also named after the Holy Ha’Ari -the 16th C author of the Kabalah. From its peaks is a great panorama of the western Galilee and the Sea of Galilee.

The photo below shows the highest peak in the ridge is seen below, with a view of the valley of the Kerem (with the city of Carmiel). In the background are Mt Carmel (left) and the bay of Haifa and Acre (right). 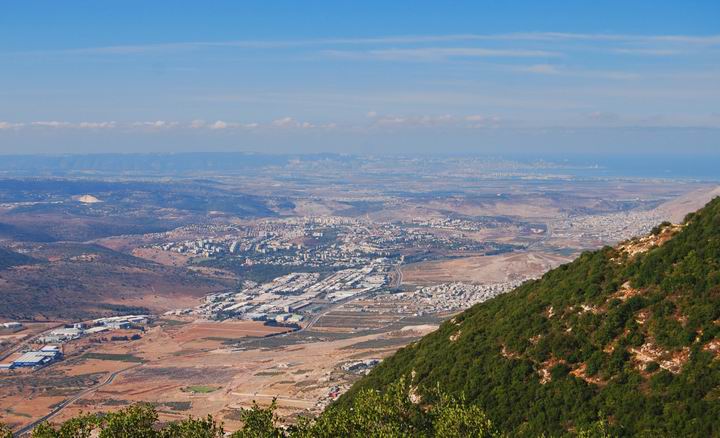 A view towards the east is seen below, with the Sea of Galilee in the far left background. 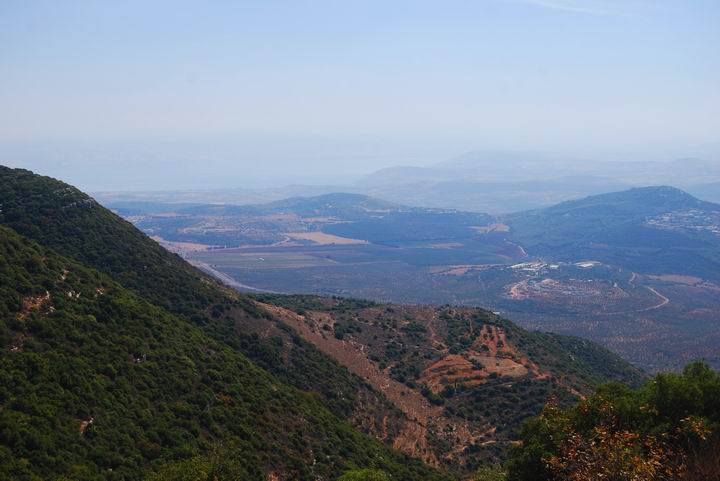 The top of the mountain is bare, except for a round low wall around its peak, seen below.

We speculate that the round enclosed area behind the wall, which measures to about 200 square meter, may have been used as watching tower and a fire-signal post. The next post was probably Har-Gamal at the edge of the valley, and from there to Acre. In Jeremiah 6:1 there is an excellent text that refers to Jerusalem, but may be applicable to this site as well, which also overlooks the Beth Haccerem valley:   “… and set up a sign of fire in Beth Haccerem: for evil appeareth out of the north, and great destruction”. Another text is in Judges 20:38-40: “Now there was an appointed sign between the men of Israel and the liers in wait, that they should make a great flame with smoke rise up out of the city….”. 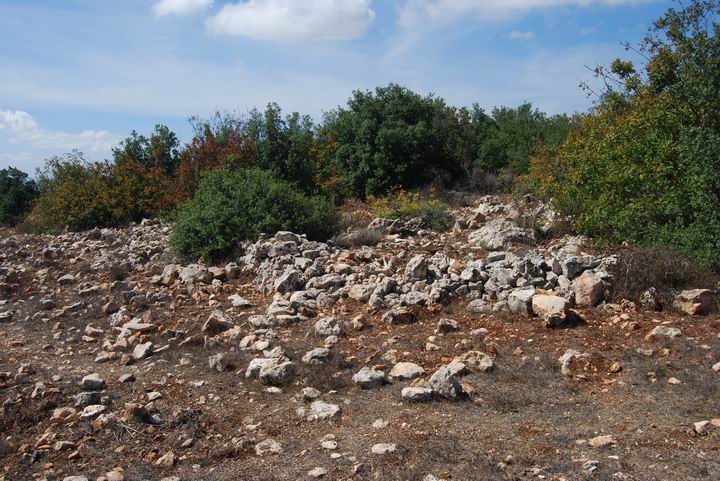 There are spectacular sunsets to be seen, as in the photo below. The valley on the left is called “Beth Haccerem” (as in the Jeremiah text), while the background is the Carmel and Haifa (left) and Acre (center). 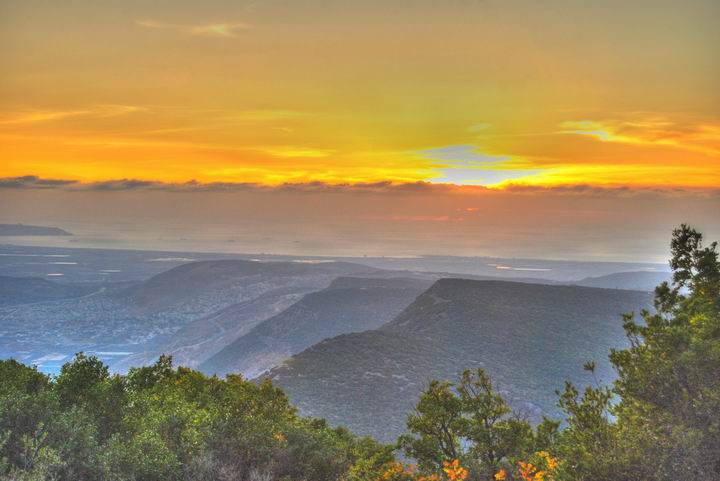 Another sunset view is seen below. 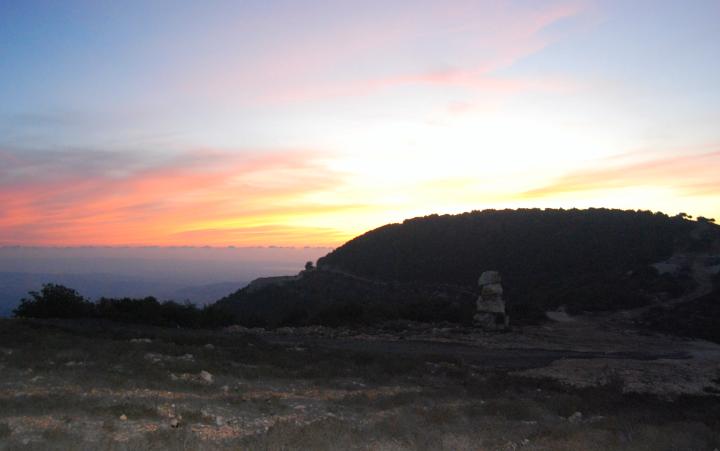 The area around Beit Jan has excellent hiking and nature paths. In the photo below the group (family of webmaster Rotem) plans the hike around Mt Ha’Ari and down to Khirbet Essel.

There are other outdoor sports, such as horse riding and hang gliding off the nearby cliff. 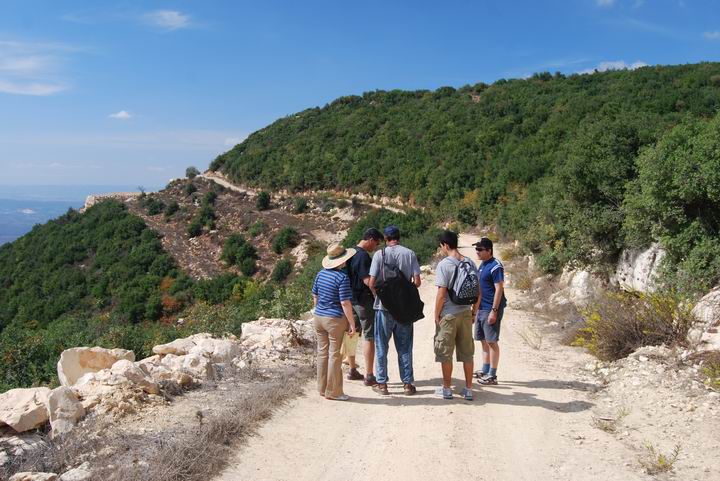 The following flowers and trees were among the wild plants seen along the trail on the first week of October.

The photo below shows one of the flowers that can be seen on the first days of the autumn, and is named as the informer of the Autumn. The flower type is called “Colchicum tauri”; In Hebrew: “Sitvanit Hermon”, where the former name means “flower of the Autumn” and the latter name is called after Mt Hermon. Sitvanit is referred in the Mishna, the 2nd C AD books of Jewish practices, where it is said to be used to produce vinegar.

(Rotem: thanks for uncle Ronnie for the identification of the flowers and trees) 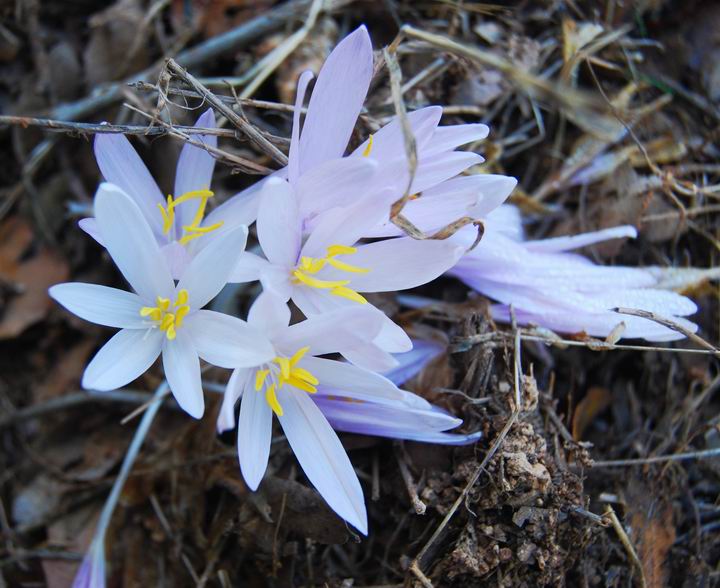 Another common bush is seen below, called Spiny Hawthorn (Hebrew: “Uzrar Kotzani”). This thorny bush was associated by the Greeks and Romans with marriage and fertility, and is used in religious ceremonies. 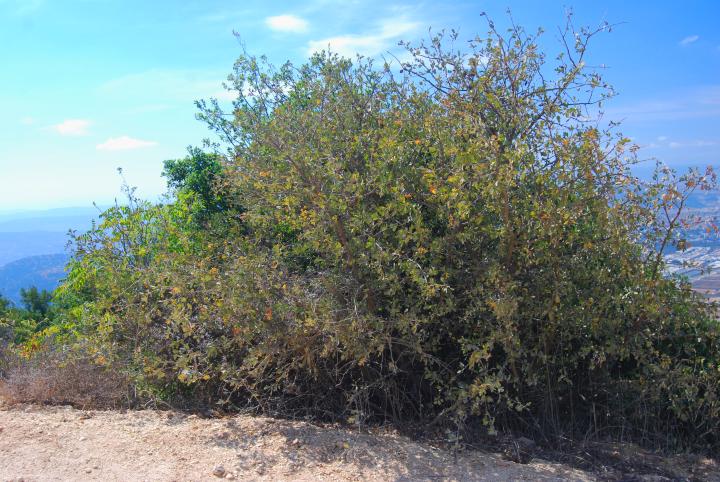 One of the Christian traditions is that the Jesus crown of thorns was twisted from twigs of the bush, and thus the bush is also called “Christ Thorn”.  (Matthew 27: 29: “And when they had platted a crown of thorns, they put it upon his head…”). Note that there are other thorns that claim to have made up the crown of thorns, such as the Arabian jujube (Ziziphus spina-christi, sheisaf ).

A detail of the Hawthorn bush shows the fruits, which taste like an apple. The Arabs collect these small fruits and prepare jelly and juice. 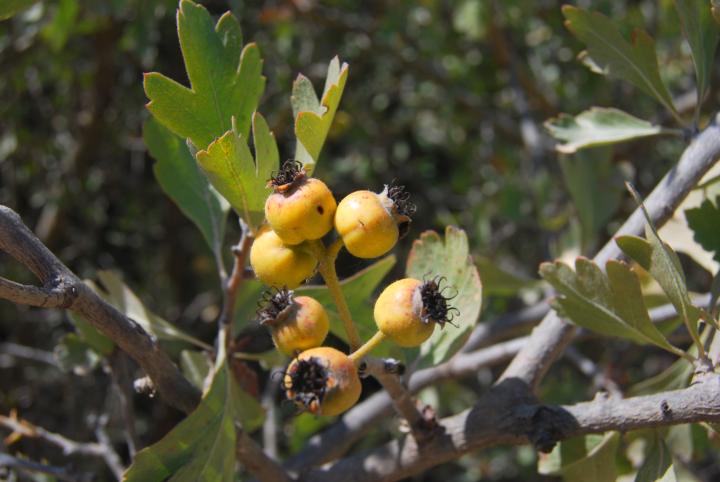 Another bush, seen below, is called “Eastern Strawberry Tree” (Hebrew: “Katlav Matzui”). Its branches and fruits have a vivid red color, which earned its “strawberry” name.

There are several tales that explain the “bloody” look of the branches and fruits. One of the Biblical tales is about prince Absalom – the son of King David who mutinied against his father. He was caught hanging on the oak tree (in the Hebrew version: Ella/Pistacia tree) with his long hair, then he was stabbed to death by David’s soldiers. According to the legend,  on the place where Absalom’s blood dripped, a new tree specie was born – the strawberry tree.

2 Samuel 18:9-17: “And Absalom rode upon a mule, and the mule went under the thick boughs of a great oak, and his head caught hold of the oak, and he was taken up between the heaven and the earth; and the mule that was under him went away…. And ten young men that bare Joab’s armor compassed about and smote Absalom, and slew him…. And they took Absalom, and cast him into a great pit in the wood, and laid a very great heap of stones upon him:”.

This tree is normally found near an oak tree , just like where prince Absalom died. 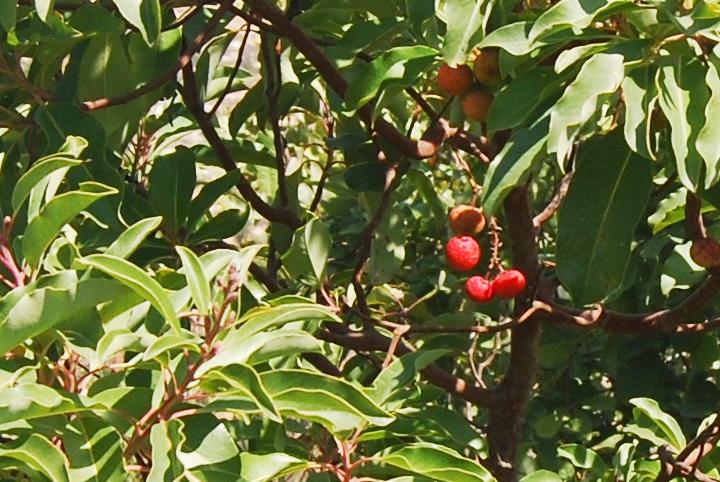 The east side of the region of the Israelite tribe of Asher passed at a site/city of Beth Dagon, which may be identified as the place of Beit-Jan (which preserved the name).

“And the fifth lot came out for the tribe of the children of Asher according to their families. And their border was…

… And turneth toward the sunrising to Bethdagon…”

This text describes the area belonging to the bordering tribe of Naphtali (Naftali), including the city of Ramah which is located in the plains south of the hills of Beit Jan.

… And the border … reached to Asher on the west… And the fortified cities were … Ramah…”.

the Galilee, and may have preserved the ancient name.