Tell Yifar, a nature reserve, was a Biblical site located near ancient crossroads. The springs around the site are one of the sources of the Kishon creek. Water buffalos and donkeys graze in the swap.

Tell Yifar, an open nature reserve, was a Biblical site located near ancient crossroads and close to the ancient site of Afula.

The ‘Adashim springs around the site are one of the sources of the Kishon creek, and created swamps which were mostly dried out. Around the lake is a fenced area where water buffalos and donkeys graze.

A modern agriculture settlement of Balfouriya is located nearby. The modern highway to Afula traces the path of the ancient road to Megiddo.

Judges 5 13: “Then he made him that remaineth have dominion over the nobles among the people” (inscription on the monument on the top of the hill)

The site is located 500M west of the Afula-Nazareth road, about 2.5 KM south of Tell-Adashim.  The remains of the swamps are seen in the center.   You can point on the purple points to navigate to the selected point. 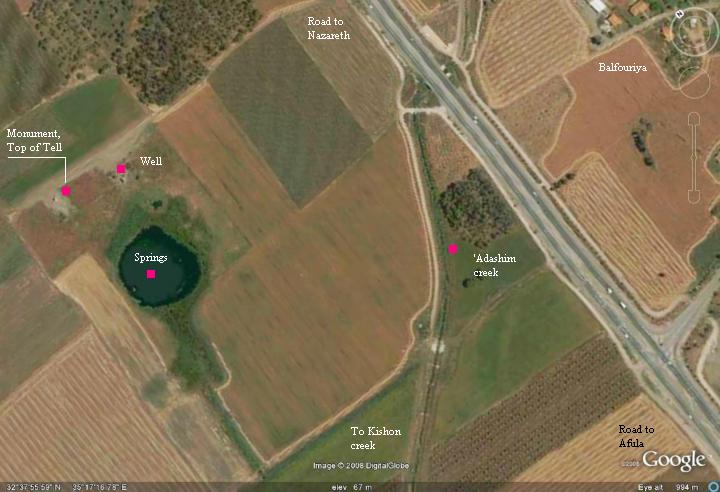 The site was probably inhabited  starting from the Chalcolithic period (4500 – 3150 BC) and continued to be settled throughout the Iron age. It was located near springs, and therefore protected by the swamps around it. The ancient city was located in the path of major crossroads – north-south from Tabor to Megiddo, and west-east from Acre to Beit-Shean.

The cities and roads during the Canaanite and Israelite periods are indicated on the Biblical Map below, with Tell Yifar in the center. 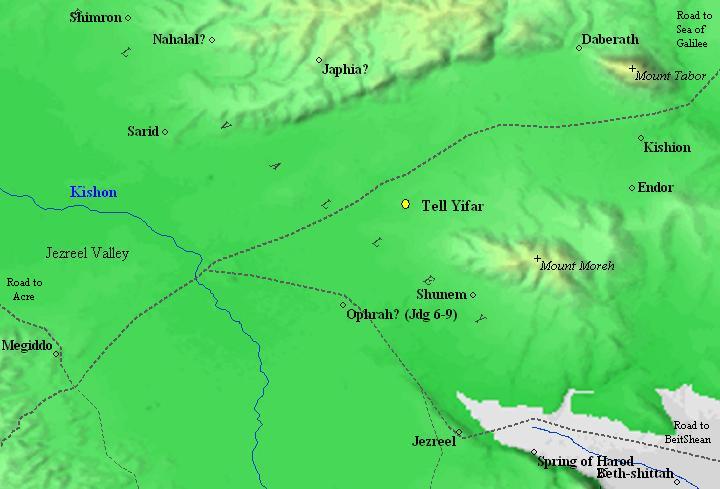 Map of the area around Tell Yifar – during the Canaanite and Israelite periods – 15 century BC through 6 century BC  (based on Bible Mapper 3.0)

As most of the sites in the Galilee, it was probably destroyed by the Assyrian intrusion of 732 BC, and never inhabited again.

The well was in use during the Roman period, but the  village moved to a larger place nearby. Its new location is  marked on the old map below as “Kh. el Mezrah”, closer to the route of the ancient road. According to the PEF survey (1866-1877), they found traces of ancient ruins with “broken sarcophagi and good springs of water”.

The site was examined in the PEF survey (1866-1877) by Wilson, Conder and Kitchener. It appears in the center of the section of this map of 1878.  They named the site of the springs as el-Mujahiyeh, meaning in Arabic: “the place of bursting forth of water”. It was identified as one of the sources of the Kishon river. 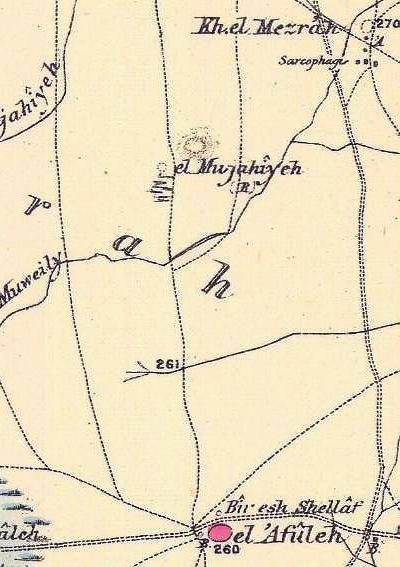 The mound is situated near the ancient Road (appears as a double dashed line to the right of the site), connecting the north (from Mt Tabor) to the south (el Afuleh which is Afula), and then to Megiddo.

During WW1 the German troops pumped water for the supply of water to the Turkish locomotives in Afula. Since then, the well in the site is called the “German well”.

Balfouriya was founded in 1922 1KM east of the Tell. The Moshav was named after James Balfour, the British foreign minister who’s declaration in 1917 gave Jews a homeland in Israel, which was one of the milestones of the Zionist movement.

The swamps posed a danger to the settlers, and they eradicated the malaria by drying the swamps. The swamps covered hundreds of Dunams around the area. The majority of these swaps were dried up using pipes and pumps, but some of the swamp remained around the ancient site.

In 1979 a nature reserve was declared in the area around Tell Yifar, and the area of 45 Dunam (4.5 hectares) was fenced off. In order to keep the swamps clean of canes, a number of donkeys and Water Buffalos (Jamus) were brought here.

This is the view of the ancient Tell, which is located on a small hill in the center of the swamp. On top of the hill is a monument (the vertical rock on the right). Below the hill is the area of the lake, mostly dried up in the summer time, the well and the windmill that pumped the water out. A water buffalo, a resident of the nature park, is interested why we are visiting the site. 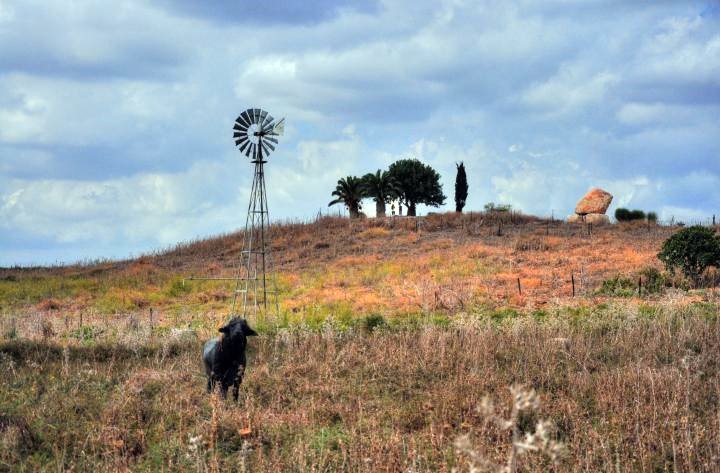 The small lake on the south-east side of Tell Yifar is seen in the next photograph. 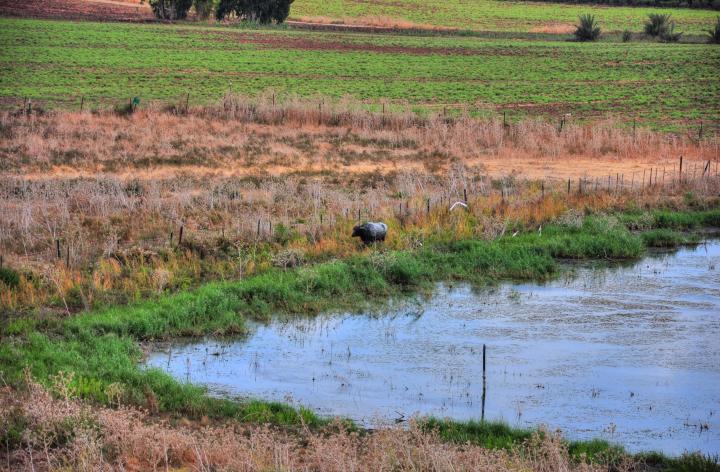 There are a number of springs around the site, called the “‘Adashim” springs. These are one of the sources of the Kishon creek, which flows through the heart of the Yizreel (Jezreel) valley to the Mediterranean sea – north of Haifa. The Kishon creek becomes a wide river only in its last 6KM segment. The Kishon river is referenced in several Biblical events (the books of Joshua, Judges and Kings). 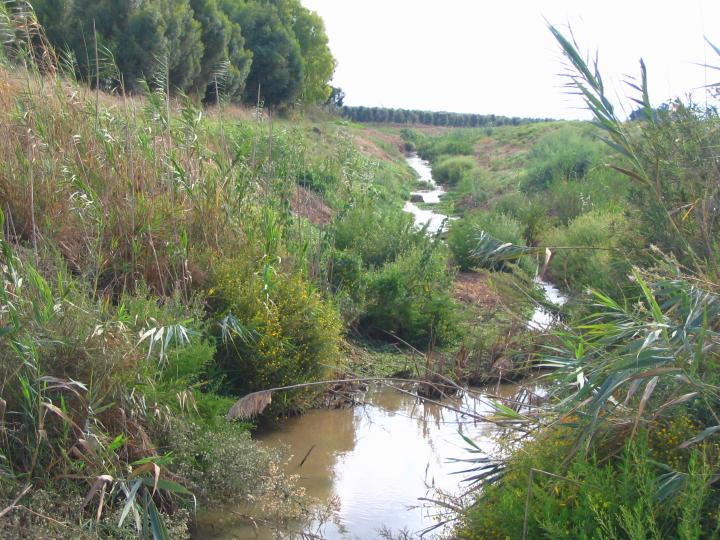 The well is seen in the next photograph, and is dated to the Roman period, with a modern structure built over it. A broken wind mill is located above the well, which used to pump the water. During WW1 the German troops pumped water for the supply of water to the Turkish locomotives in Afula. Since then, the well in the site is called the “German well”. 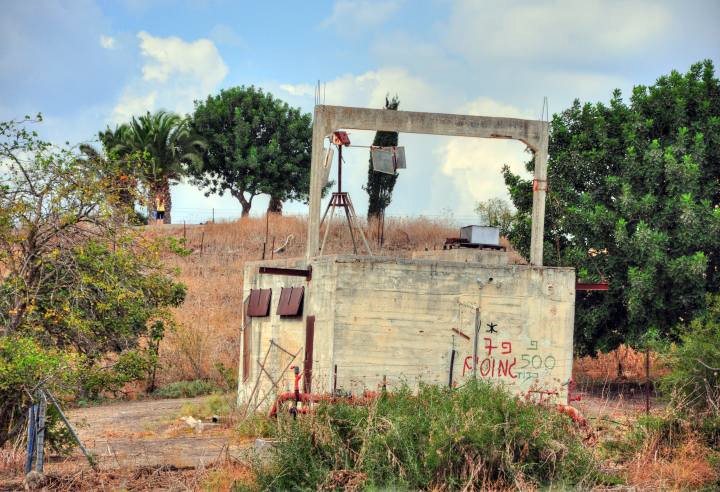 A view from the site towards the east is seen below. Behind the well, 0.5KM away, is the main road from Nazareth to Afula.  Behind it, at about 1KM away, is Moshav Balfouriya. In the far background is  the hill called Givat-Hamoreh (hill of Moreh), which is mentioned in a Biblical description of a battle (Judges 7,1: “Then Jerubbaal, who is Gideon, and all the people that were with him, rose up early, and pitched beside the well of Harod: so that the host of the Midianites were on the north side of them, by the hill of Moreh, in the valley”).

On the foothills of Moreh  are other ancient sites: Shunem (Sulem) on the southern foothills, and Naim (Nein, site of Jesus’ miracle) on the northern foothills. 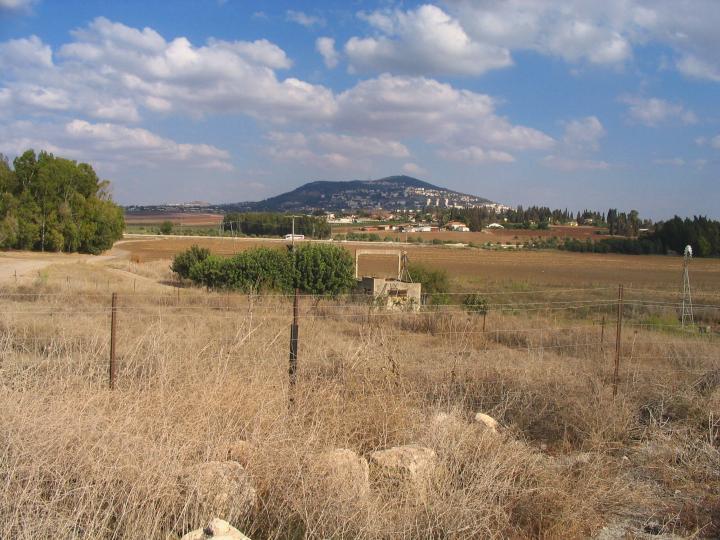 A monument was erected by the residents of Moshav Balfouriya to honor the memory of its soldiers.

The inscription on the pillar is a verse from prophetess Deborah’s song of triumph over the Canaanites, when Barak the son of Abinoam defeated the Canaanite army led by Sisera.  It reads ( Judges 5 13): “Then he made him that remaineth have dominion over the nobles among the people”. In the background of the inscription is a map of the creeks around the site (Kishon and Precipice) where the battle occurred and the Israelites were victorious. 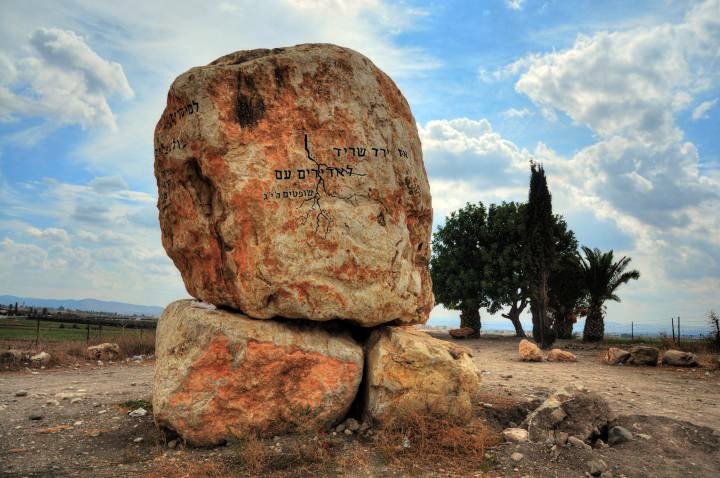 On the south side of the pillar is a rock-hewn sculpture of the pioneers farming the fields.  In the background behind the left side of the rock  is Mount Precipice near Nazareth, the traditional site of Jesus’ leap. 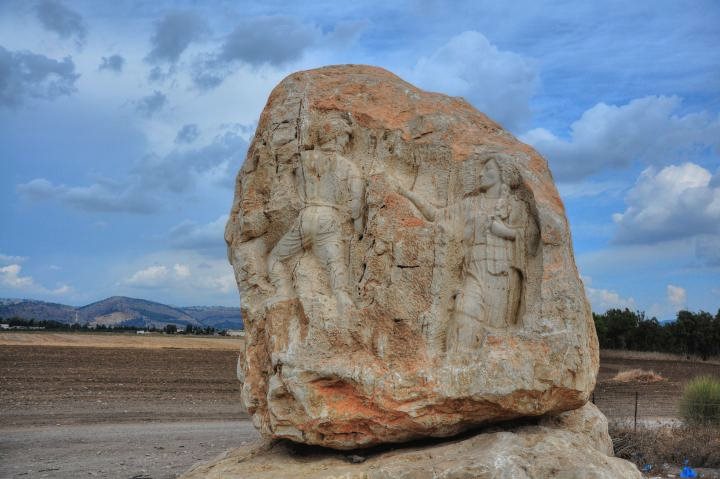 (d) The Buffalos and Donkeys

In the nature reserve is a small number of Buffalos and donkeys, who were brought here to eat up the canes and weeds, keeping the swamp clean.

The photo below shows a view to the west, with a water buffalo grazing in the swamps. 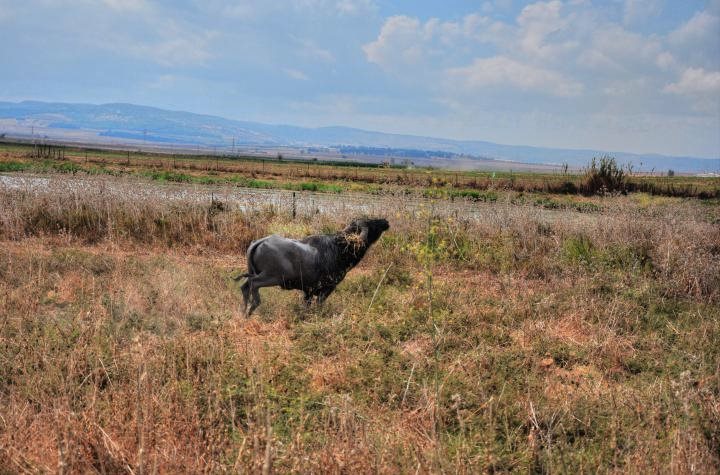 The use of the water buffalos to clean up the swamps is used in other sites, such as in Hula lake and in Afek nature reserve.

A closer view of the buffalo is shown next. It doesn’t look so happy… tough day in the swamps. 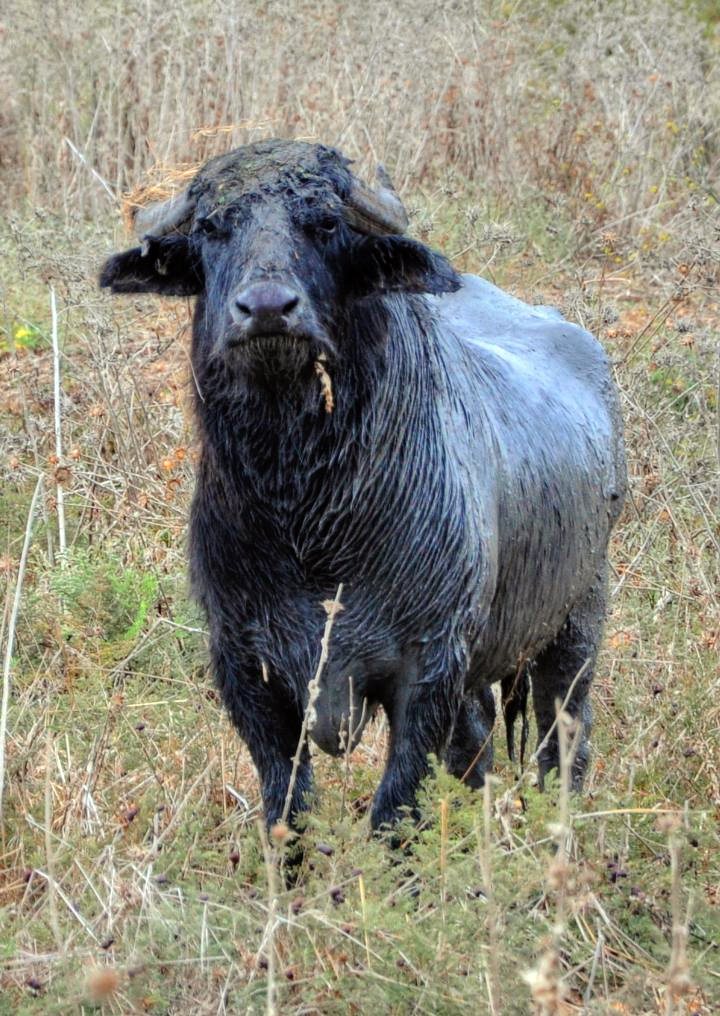 A pair of donkeys are other residents of the nature reserve, and they welcome you behind the fence on top of the hill. In the background is a small pond, which is what remained from the swamp after a dry summer. 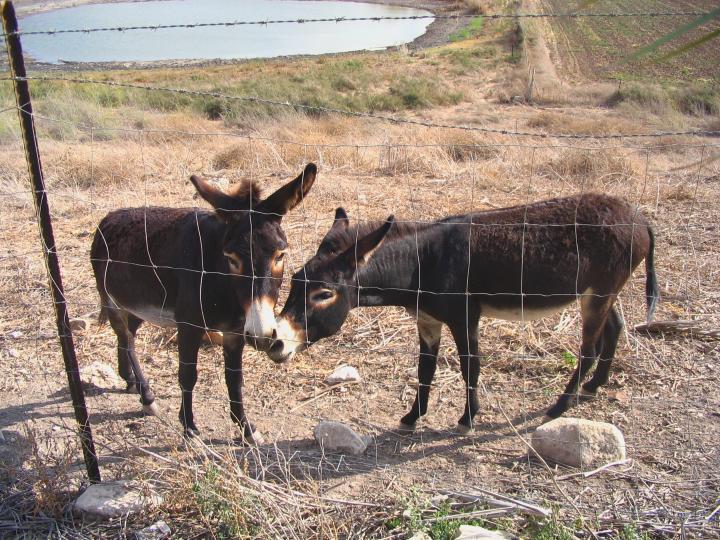 The Biblical village moved to a larger place nearby, called “Kh. el Mezrah”, which was closer to the route of the ancient road. According to the PEF survey (1866-1877), they found traces of ancient ruins with “broken sarcophagi and good springs of water”.

The site is located on a hill north of Balfouriya, which is seen in the center of the photograph. Behind it in the far background is Giv’at Hamoreh. 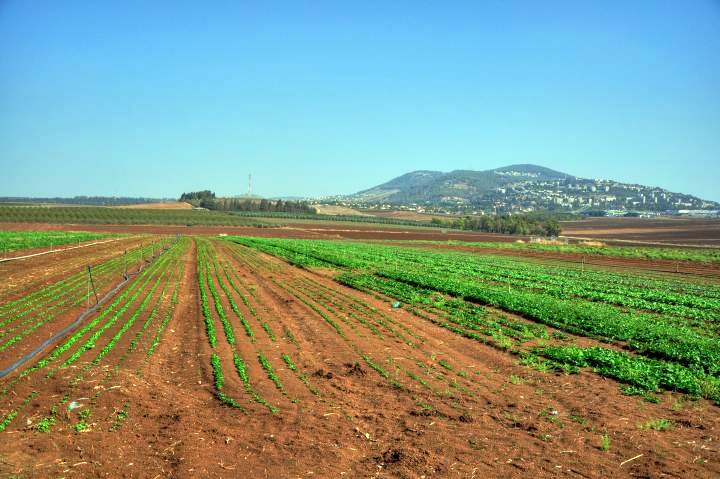 A closer view of the hill, where the ruins of Kh. el Mezrah are located, is in the next photograph. Behind it, on the far right background, is the village of Naim (Nain) and Tell Agol. 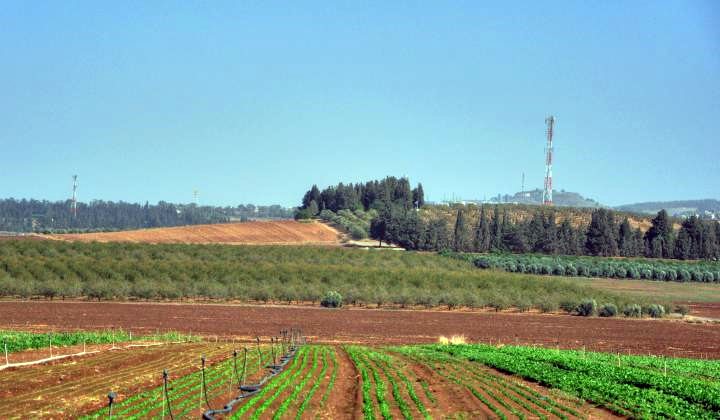 The Bible lists the “Kosher” meat, which includes the wild ox (“Teo” in Hebrew) which is a water Buffalo.

“These are the beasts which ye shall eat: the ox, the sheep, and the goat, The hart, and the roebuck, and the fallow deer, and the wild goat, and the pygarg, and the wild ox, and the chamois. And every beast that parteth the hoof, and cleaveth the cleft into two claws, and cheweth the cud among the beasts, that ye shall eat”.

In this verse the word “Teo” was translated to “wild bull“.

“Thy sons have fainted, they lie at the head of all the streets, as a wild bull in a net: they are full of the fury of the LORD, the rebuke of thy God”.

Genesis 25 34 : “Then Jacob gave Esau bread and pottage of lentils; and he did eat and drink, and rose up, and went his way: thus Esau despised his birthright”.

Ezekiel 4:9 :”Take thou also unto thee wheat, and barley, and beans, and lentiles, and millet, and fitches, and put them in one vessel, and make thee bread thereof, according to the number of the days that thou shalt lie upon thy side, three hundred and ninety days shalt thou eat thereof”.